2 September 2015
44
Unmanned aerial vehicles, or drones, are increasingly being used not only by the military, but also by civilians. Various quadrocopters have become widespread on the market, which can be purchased by almost anyone. At the same time, the widespread use of drones is becoming a serious problem for military and law enforcement agencies of different countries.


Taking this into account, the American corporation Boeing introduced its own development - a laser device designed to combat unmanned aerial vehicles. It is worth noting that Boeing, like the equally well-known American company Lokheed Martin, has been working to create effective laser systems designed to destroy enemy equipment, projectiles and missiles, for a long time. From time to time, companies demonstrate to the public experimental samples of lasers that are able to shoot down missiles, shells and mines, damage flying objects, or simply burn through a rubber boat. However, now the company Boeing introduced a low-power laser installation, which is sharpened for the fight against drones.

Today the widespread distribution of unmanned aerial vehicles among the civilian population takes on the contours of a serious problem. Multicopter flights over highways have already become the cause of road accidents, and once drones, which were controlled by civilians, interfered with the fire extinguishing using airplanes and helicopters. In addition, drones pose a rather serious danger to civil aviation, and in the light of the fact that some craftsmen manage to install a pistol on an ordinary quadrocopter, thus turning it into a combat unit, the issue of protection against such civilian drones is becoming more acute. 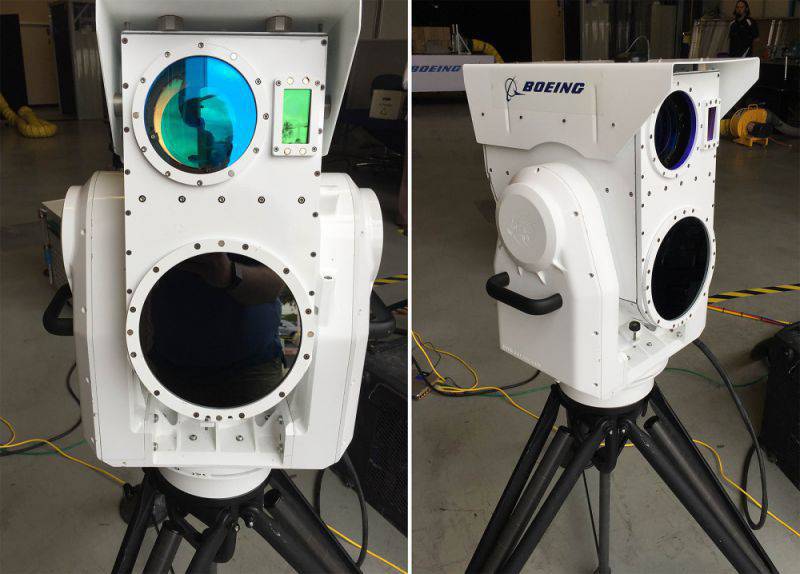 The problem today is that the owners of civilian drones often do not follow any rules when using them. Only in the United States, according to the Federal Aviation Administration, since 2015, there have been 650 cases when civilian pilots observed drones in close proximity to their aircraft. Flying such drones near airplanes and helicopters is not only a threat to flight safety, but also illegal. Most likely, in the future, all unmanned vehicles purchased by the public will need to be registered without fail - in order for law enforcement agencies to identify their owner in the event of violations. Probably in the future there may be a special license that will give citizens the right to manage drones. But so far, Boeing has responded to the existing problem with a new development in the defense sphere. This is a portable laser machine CLWS (Compact Laser Weapons System), the main purpose of which is just the fight against unmanned aerial vehicles.

The management of the presented laser setup is carried out using the most common controller from the popular Xbox 360 gaming console (this is made for ease of replacement, low cost and easier training for operators) and a laptop with pre-installed software. The entire laser setup fits easily into four rather impressive, but transportable suitcases. A few people will take just a few minutes to deploy to a combat position. According to one of the developers of the installation, Isaac Neal, the first prototypes of the system weighed 40% more, but the latter option is much easier to transport, and the system began to work faster. Moreover, if you try to track the laser, you will not be able to find which side it is attacking and where its source is, said Isaac Neal.

The system is designed for firing from the ground, but with minimal modifications it can be used from various vehicles. The presented CLWS installation is, in fact, a reduced version (2 kW power) of another Boeing design, known as the High Energy Laser Mobile Demonstrator. The latter is mounted on a larger automobile chassis (cargo) and is able to shoot down enemy missiles and mines right in the air. 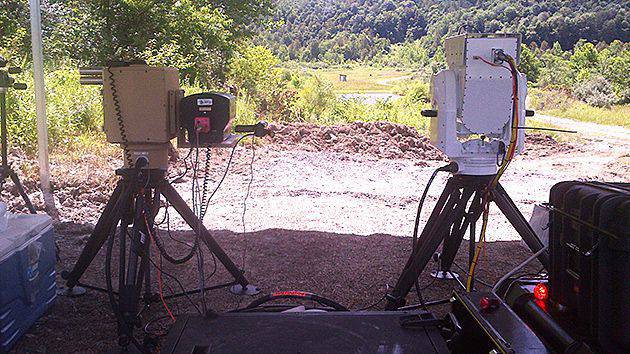 Judging by the video, which was published on the official channel of the company Boeing on YouTube, the laser device, which received the designation Compact Laser Weapons System, has successfully passed the stage of field trials. The laser is mounted on an ordinary tripod on the ground or on a moving vehicle, such as a military SUV, helicopter or ship. The operator to control the laser installation does not need anything other than a gamepad from the Xbox 360 and a laptop with the necessary set of programs. In this case, such a set is enough to knock down a drone or quadrocopter literally in 15 seconds. And most of this time will be spent on the process of targeting the installation on the target. After the initial capture of an air target, the installation goes into its independent control and retention mode. Since the laser beam moves at the speed of light, the software does not need to drive the target for a long time and accurately calculate the trajectory - an error of up to 5 centimeters is permissible.

Boeing doesn’t talk about the damage radius of its new product, noting only that it can reach the drones that can be seen through binoculars. The laser beam destroys the elements of the design of the drone, causing loss of control and its further fall to the ground. Engineers have taken care of the safety of the installation for humans. They made everything possible so that no one was blinded by the laser used in the device. The laser system operates in the infrared range and its beam does not produce visible radiation.

The installation shown by Boeing is also suitable for the needs of military and counterintelligence. The company expects that in the next few years it will be able to receive wide distribution. At the same time installation will easily find application in other areas. For August 2015 of the year news that drones are increasingly being used for criminal purposes. Just at the end of August, American media reported that the police managed to detain two men who were trying to deliver drugs, tobacco products and porn materials to the territory of Maryland with the help of a quadrocopter. To do this, they used the usual unit costing just 1000 dollars. Similar cases were noted in other states. On similar incidents speak in Russia. So at the end of July 2015, the staff of a correctional colony located in Magadan noticed a quadrocopter flying towards one of the blocks for convicts, to which two mobile phones with inserted SIM cards were taped to with the help of scotch tape. So the laser systems to combat drones can be claimed not only by the military.

True, there are a number of difficulties that laser technology is facing today. Lasers lose their effectiveness in conditions of poor visibility - the presence of dust, fog in the air. And their batteries are only enough for a few accurate shots. The laser unit from Boeing, whose power is 2 kW, requires a powerful generator on a nearby vehicle or special batteries. The company has not yet calculated the final cost of its development, but claims that the purchase will be only one and no further costs for its maintenance are foreseen. The only consumable in this case is electrical energy. With the maintenance of the installation, everything is also quite simple. There is only one moving hinge, all other parts of the installation are static. In addition, the use of a laser always removes a very important financial issue - the consumption of fairly expensive modern ammunition.

It is curious that on this kind of installation work in China. In November last year, the Chinese Academy of Engineering Physics, in close cooperation with a number of Chinese corporations, demonstrated a prototype of its own laser facility. In preliminary tests, the 10 kW laser setup successfully hit all 30 drones without even missing. According to the developers, the laser can attack targets that move at speeds up to 180 km / h at altitudes up to 50 meters and are located at a distance of up to two kilometers from the installation. The position of the target and its subsequent capture into the sight is carried out using optical-electronic sensors, and the process itself takes about 5 seconds. Dimensions of the Chinese installation allow you to install it on large army SUVs and trucks. Also important is the fact that Chinese engineers were inspired by exactly the same installation as their American counterparts. This is the Boeing High Energy Laser Mobile Demonstrator.

In any case, we can state the fact that our society is quickly entering a technological age in which the fight against drones can become one of the priorities of the army and law enforcement agencies. While drones are increasingly used in business, journalism, science, analysts of law enforcement agencies of all countries recognize that their use may have a negative side. For example, they can be used to transport drugs across the border or for terrorist purposes, which poses new challenges for law enforcement.