Comrade Lavrov does not throw words to the wind 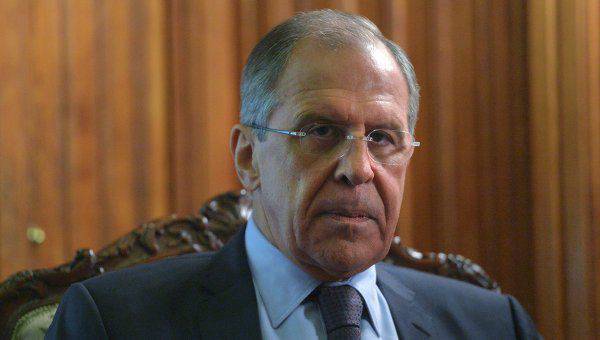 When Sergey Viktorovich Lavrov made a statement that “the era of political and financial domination of the West is coming to an end,” he reported this to the whole world not as an individual, but as the minister of one of the leading world powers. And not just as the Minister of Agriculture or Natural Resources, but as the Minister of Foreign Affairs, whose every word should be “cast in granite” (I did not want to be distracted from the canvas of this post, but apparently our “St. Petersburg” Prime Minister still knows that the granite embankments of St. Petersburg, like the rest of the granite St. Petersburg, including the Alexandrian and other columns, are the WALKS from granite like concrete, and were not cut out with a hammer and chisel).

If Yevgeny Maksimovich Primakov, not in such a distant 1999 year, said that the world would be multipolar, then Sergey Lavrov simply picked up and snapped (put Klyazma) that the world is at least multipolar, and as a result - the era of leadership of the West or the Anglo-Saxon world is coming to an end: "We are seeing attempts (of the West) to preserve domination by artificial means ..."

What are some of the reasons for S. Lavrov? There are grounds!

Here you can bring another way of financing, for example, charity: giving money to a beggar, and in return you get nothing. But this is not the case: in return, a charity beneficiary receives inexhaustible hands of the giver, salvation of his own soul, and joy from helping his neighbor who is in need (or simply earning on people's feelings). And even just a coin in a fountain is an appeal to external forces, coaxing them to return to this memorable place again.

So, one of these financing methods stopped working. Not that it completely ceased, but in those global volumes of the previously constant expansion of the world market, beginning with the era of great geographical discoveries and ending with world wars and the destruction of the USSR and the socialist system, it no longer works.

The fact is that global GDP growth on 2-3% per year does not give the world's leading banks the necessary profitability for existence. Banks also have COST. They can not lend to businesses that grow per year by 2-3%. And if enterprises do not grow at all in a crisis, they cannot be credited categorically.

But at the same time, banks are the main financial instrument of the West, with the help of which the West controls the entire global financial system, as well as the economic and political life of countries, peoples and continents. They, banks, worked well when capitalists quickly expanded their production in extensively expanding new markets. But the global market has closed and can no longer expand extensively. And intensive development does not involve super-profits, under which you can lend to borrowers, which is actually the main income from banking.

US banks hold trillions of dollars in the Fed’s accounts and don’t know where to invest them:
- to finance the real sector of the national economy is unprofitable, and even simply risky, when there is no growth;
- to invest in Asia (China) or Russia - it is possible, but not possible;
- to invest in inflating bubbles in the stock market and in real estate (the main two bubbles, which still hold a bank deposit) - have long been impossible, but still, as it were, necessary;
- to start the next Ku-Ku (quantitative easing) ... And what's the point, if the banks are already head-to-head in dollars like shit. Here are just these dollars except for the Fed or in treasure accounts to store more simply nowhere - all around WESTERN. There are money-wrappers, but it is impossible to exchange them for something worthwhile - inflation. Let in growth - nowhere;
- to scatter money from a helicopter so that they reach the “real sector” (there was such a journalistic idea in 2008-09) ... Well, this is classical inflation, and the end of the standard is in the sense of the dollar, and at the same time the hegemon. Hence, it is also impossible;
- arrange instability all over the world ... Yes, you can - set fire to the sheds in your backyard in the hope that the hated neighbor will also burn the shed. With the same success, you can type in the mouth ... jam;
- it is also possible to make a fire in Europe. But only at the expense of its ally, the EU - without the participation of Russia. Because, as before, Germany is no longer willing and unable to fight with Russia, but Ukraine wants, but it cannot either (of course, this is not about the peoples of these countries);
- to launch infrastructure programs at the expense of state financing and to disperse the economy as in 30 - to restore hopelessly aging infrastructure - roads, bridges, overpasses ... Also impossible. Because the budget is already full of holes, and the state is in debt like silk. Yes, and plundered most (our Chubais still learn and learn from their American teachers).

That Obama the other day and said that US will grow icebreakers. The question is, if the US does not have money to repair roads, bridges and overpasses, which are not regularly used by polar bears, but by US citizens, why did he, Obama, need icebreakers so urgently? Just because they have Putin and in large quantities? Well, then America needs to take the program urgently: catch up and overtake Russia and Putin (I worked somehow due to my youth on DIP-200) ...

We have already got used to the “Kuz'kina Mother” from America. But “we will catch up and overtake Russia” - this is already a new note of the degradation of the hegemon. So Comrade Lavrov was right when he said: “We are witnessing the end of a very long era, the end of a long era of domination of the historical West, domination of economic, financial, political”.

And his words are heard all over the world.

Ctrl Enter
Noticed oshЫbku Highlight text and press. Ctrl + Enter
We are
A great interview with Sergey Lavrov: about Ukraine, Obama and IranAbout Stalin and Khrushchev
126 comments
Information
Dear reader, to leave comments on the publication, you must to register.