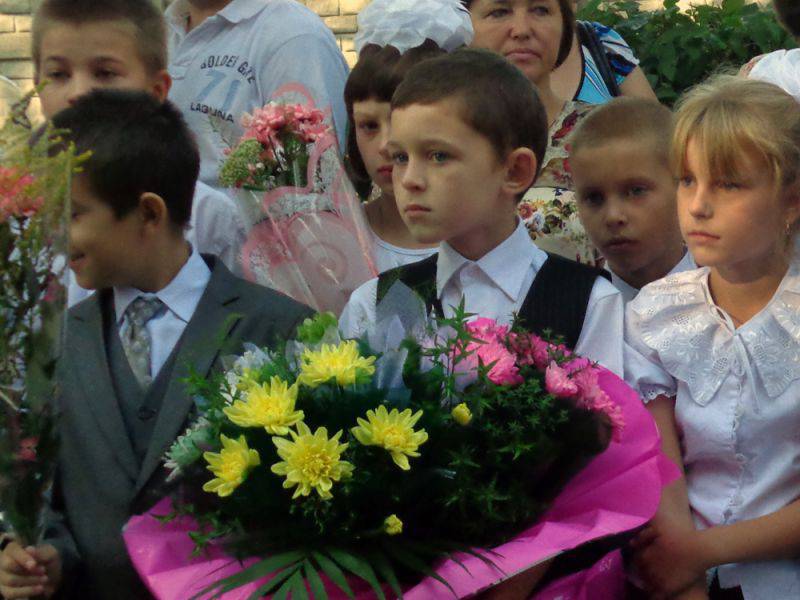 September 1 is a celebration of timid first-graders and mature high school students. Holiday honors and Losers. Holiday "nerds" and mischievous. Many children are sad about the past summer and holidays and may not want to go to classes, but then they still remember school days as the best in life. And someone over the summer missed merry friends. 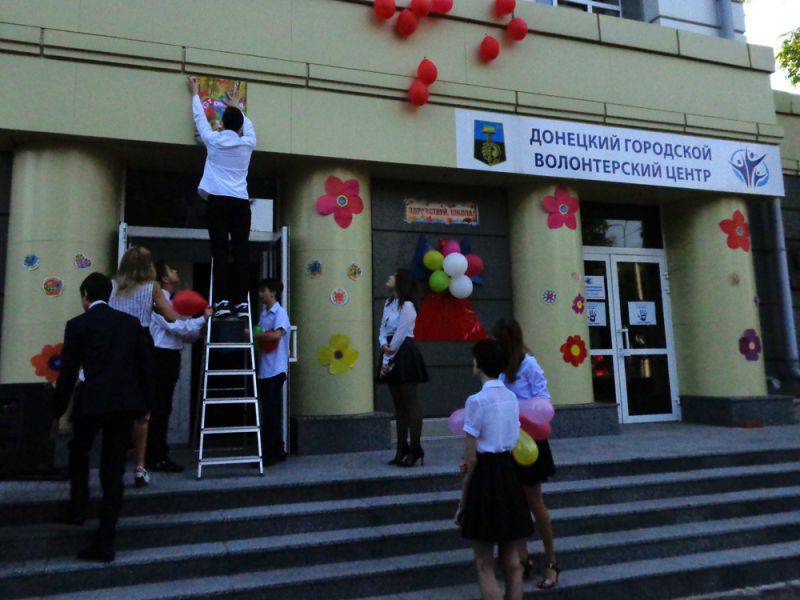 In the Donbas, 1 September has another meaning - the children meet friends and are happy that they survived. But there are, unfortunately, those who will never see their school buddies again ...

27 schools in the Donetsk People's Republic do not participate in the celebration of the Day of Knowledge. Because they have either suffered greatly and are difficult to restore, or are located directly near the front line, and it is, of course, impossible to study there. Children and teachers were transferred to other schools. In some of them the windows are tightened with plastic wrap or clogged with plywood - there are no glasses due to the shelling. In such cases, classes can be held, albeit with a stretch.

There are more fatal damage. For example, a huge damage was caused to school number XXUMX in the Leninsky district of Donetsk. Because of the shelling of the ukrokrateley, her roof burned down and almost all classes suffered. By now, the roof has been repaired, but traces of shelling are still very noticeable. There is a restoration. In the city of Donetsk, 33 schools do not start work - mainly in Kiev and Petrovsky districts. 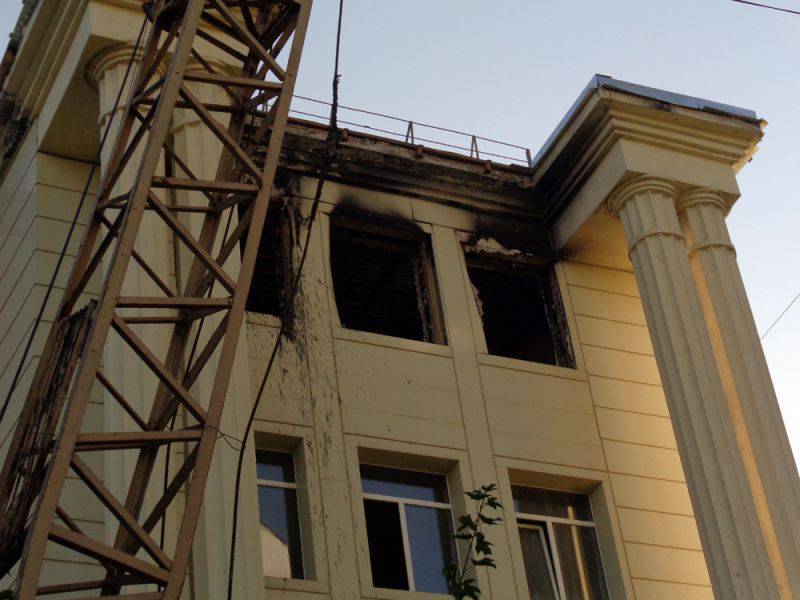 Those schools where pupils came on the morning of September 1 are beautifully decorated with balls, children's drawings, paper cuttings. Elegant schoolchildren with large bouquets of flowers go to study. Meanwhile, bad news comes from Ukraine — there, in many schools, children and their parents are forced instead of flowers to bring donations to the so-called ATO — that is, to kill Donbass children. 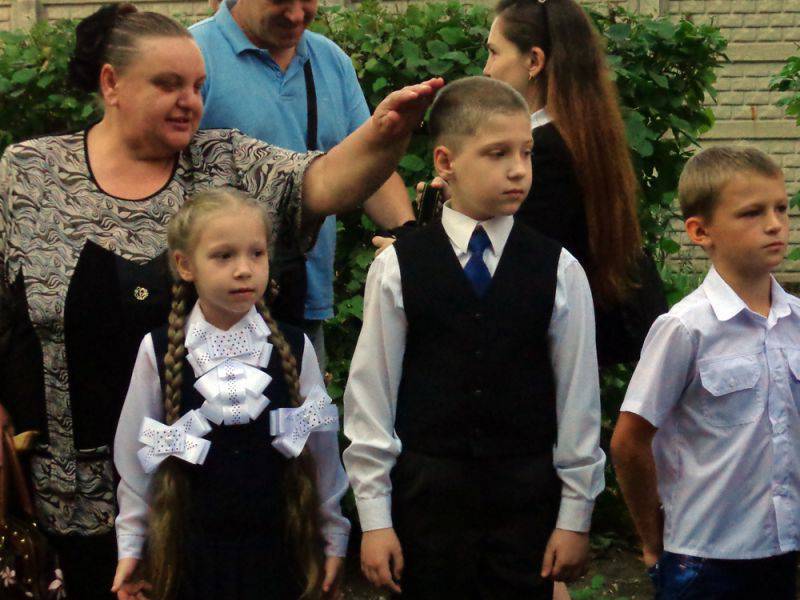 However, these days it was possible to reach an agreement on an armistice at least for the first week of the school year. In Donetsk and other cities of the Republic is calmer than usual. Even OSCE observers have decided to take up work and are watching how this fragile cease-fire is being carried out. 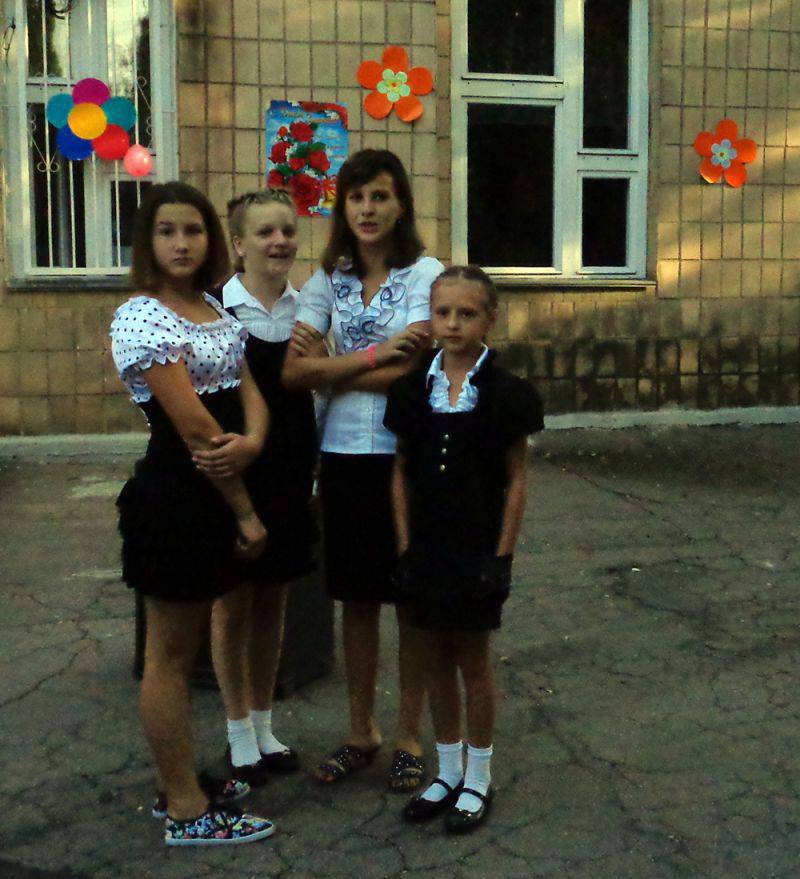 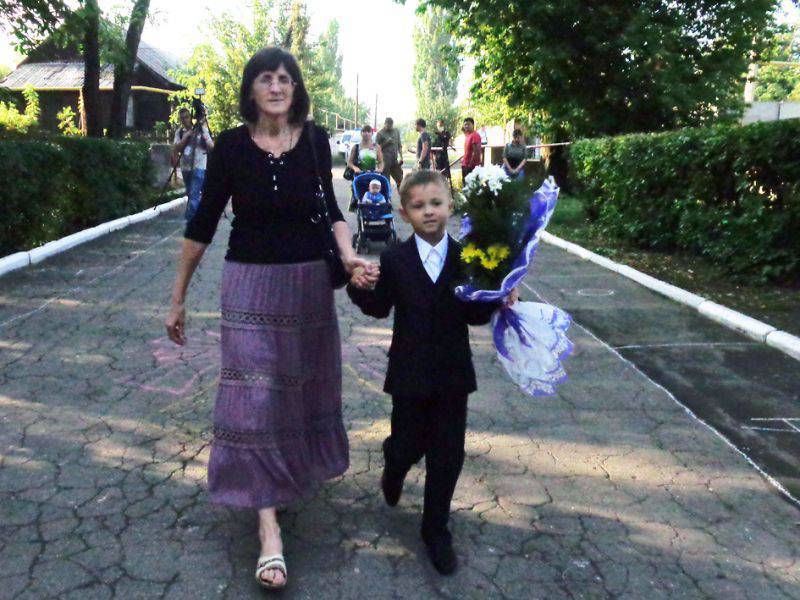 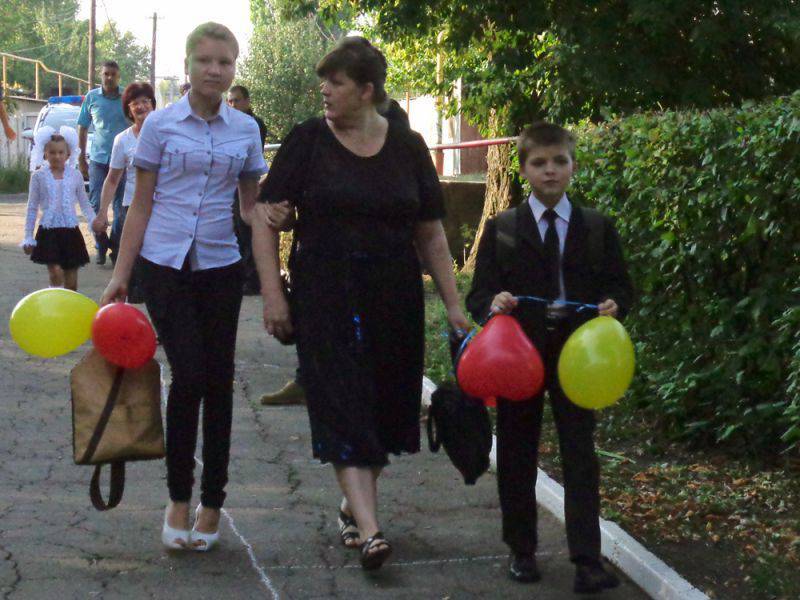 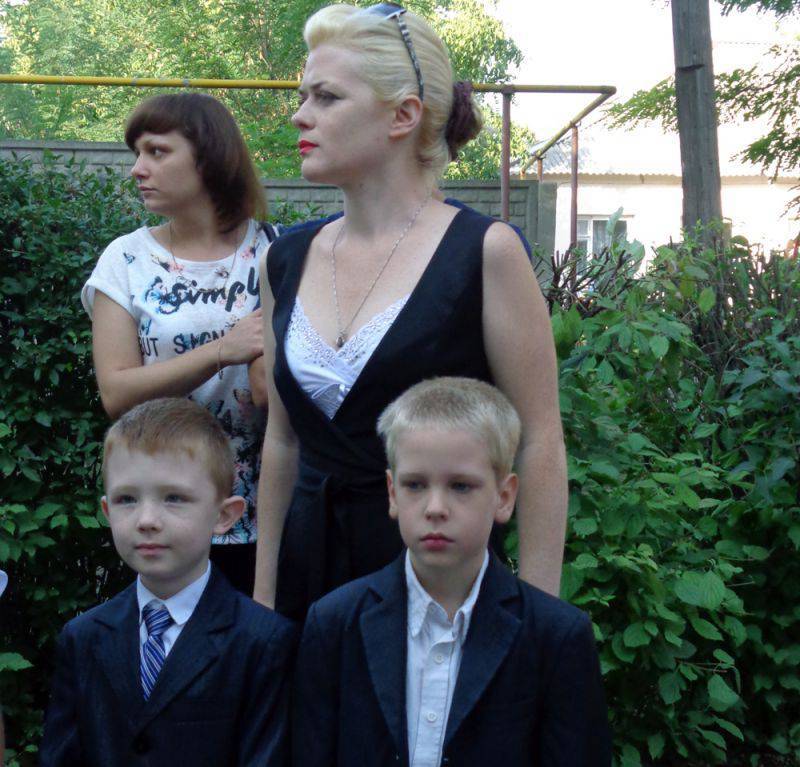 Head of the Republic Alexander Zakharchenko visited his native school No. XXUMX in Kalininsky district and congratulated the students on the start of the new school year. He also thanked the teachers for their dedicated work. 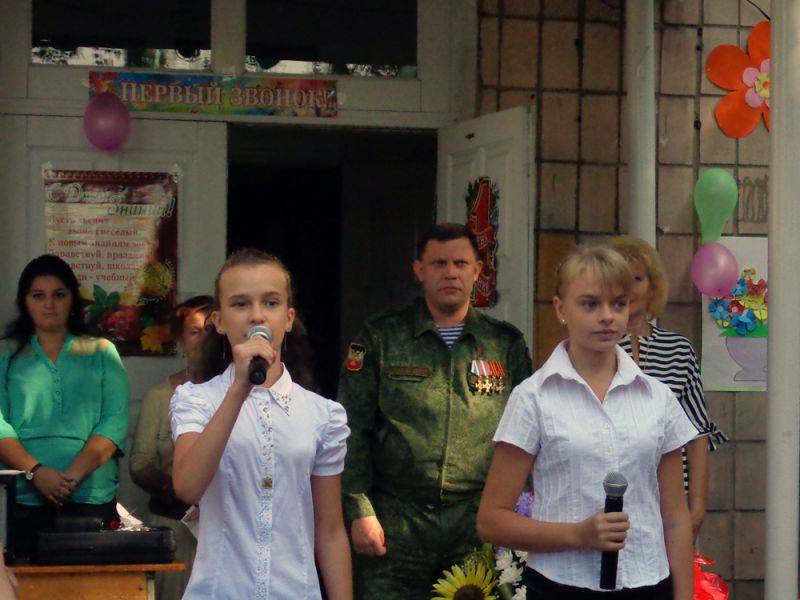 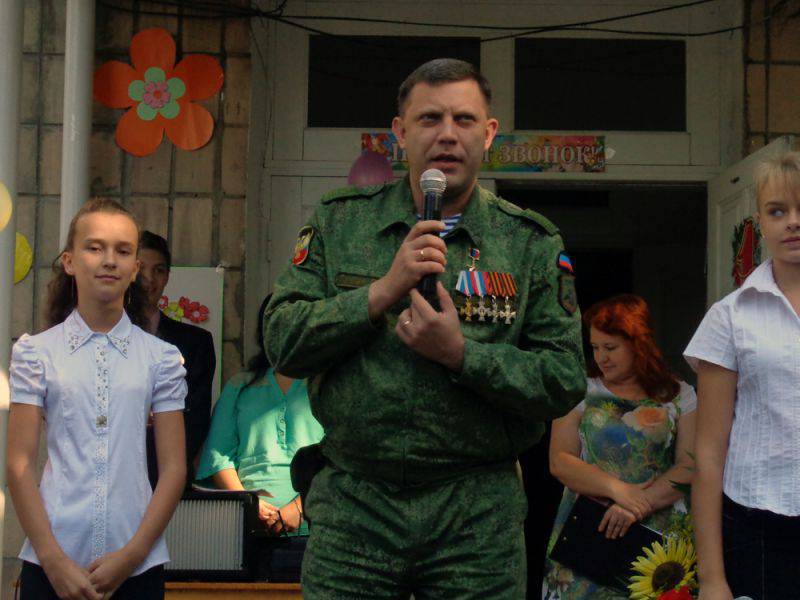 There also came the Minister of Education of the DPR Larisa Polyakova. She told reporters that there will be changes in the program - the time for learning Russian will double. And - a severe need - hours will be added to civil defense lessons. In addition, more attention will be paid to items such as drawing and computer graphics. 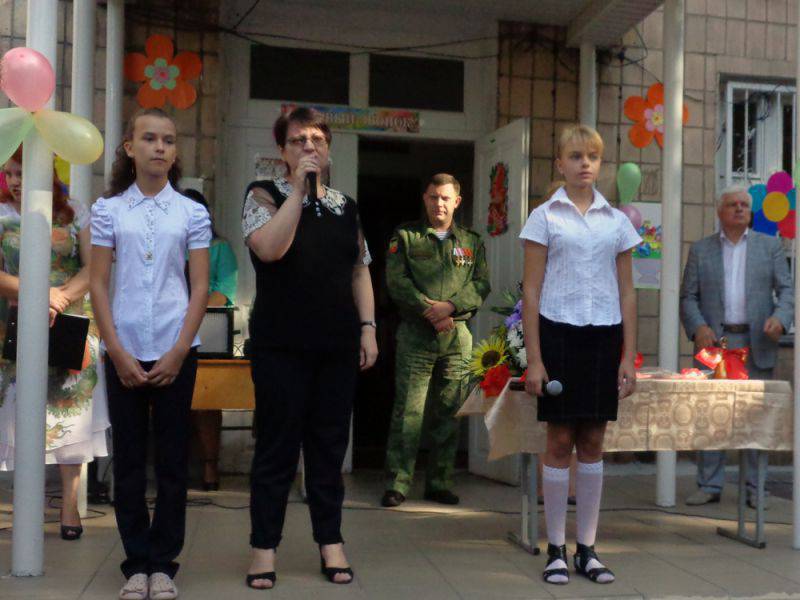 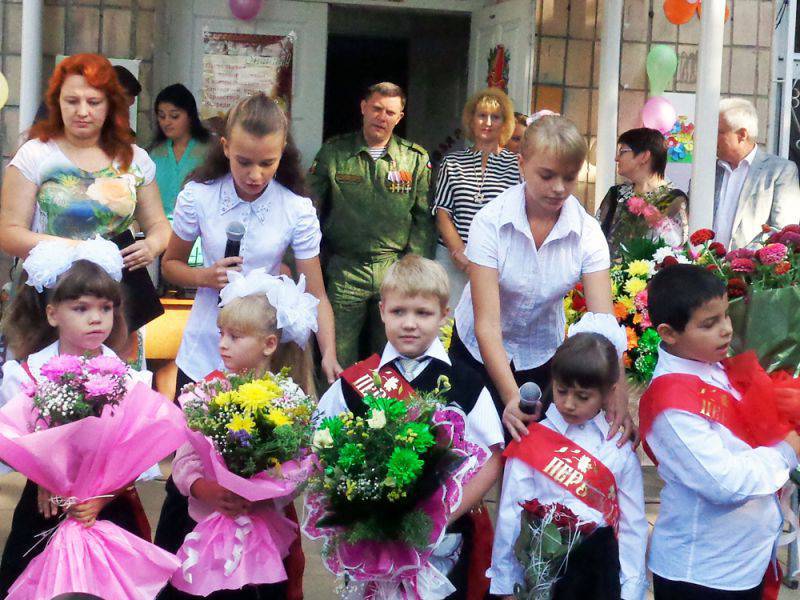 In Donetsk, after solemn rulers and lessons, it was planned to hold a massive festive event in the park to them. Shcherbakov, but for security reasons he had to cancel. Still, the temporary truce reached too fragile, and decided not to risk the lives of children.

This day is responsible not only for children, but also for students. And also - for adults. For parents and, of course, for teachers. 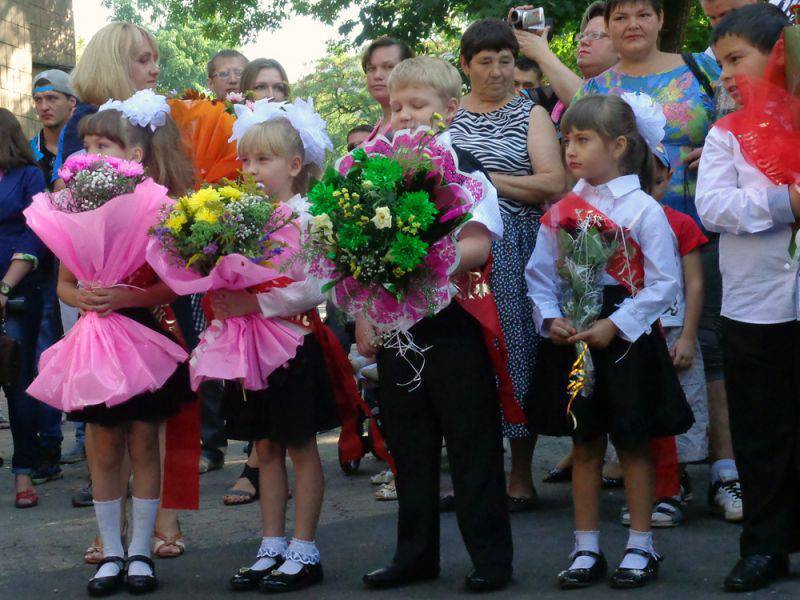 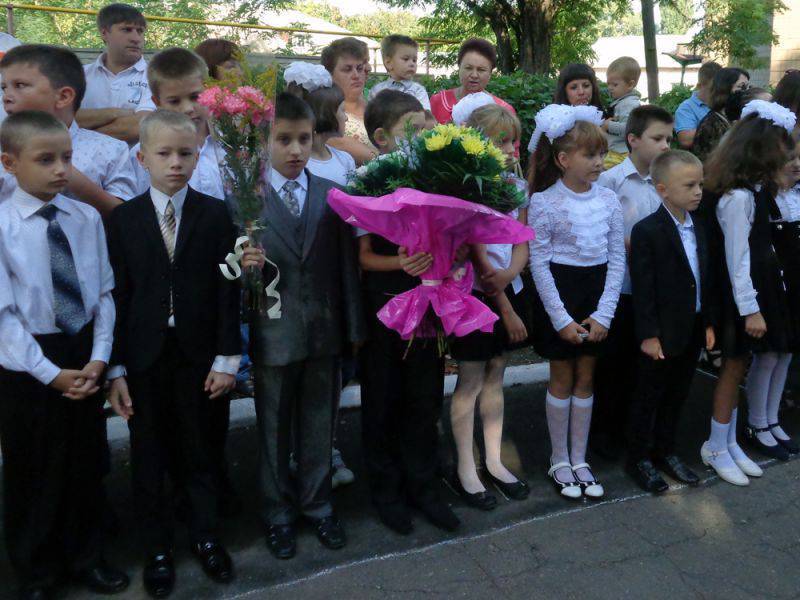 On this day, I spoke with one Donetsk teacher named Maria (I don’t cite the name for security reasons - after all, no one has canceled sites like Peacemaker, and the opposite side is ready to include in the black lists even representatives of the most peaceful professions).

- Maria, please tell us how your life has changed - the life of an ordinary teacher of Donbass - in connection with the current war.

- I used to see the war only on the TV screen. She perceived it as a kind of computer game. It was as if virtual, until brought harm. But the first time I felt the war on my own skin, I had to while I came under fire. Before that, I hadn’t assumed that shelling was so scary. I didn’t even think that I could recall all my students in a minute. Those who, perhaps, once offended, calling a blockhead or slogger, putting a deuce, making a remark.

I came under heavy shelling last summer. Then I realized that between life and death - too thin line. When death comes to you, you feel fear. It is not clear what will happen to you and what death is like. And then comes the understanding of life.

- How did you manage to escape?

- I have always looked at the slightly unshaven, slightly drunk, "cheerful" men over fifty, not so much with contempt, but with a touch of irony. I did not take such people seriously. This is the category of Donetsk men, rollicking, who like to gather in small companies and spend their time in their own way. And in that bus was driving such a peasant in shabby clothes. Maybe it was the militia who went on leave and slightly podgulyal, slightly relaxed. Our bus was traveling through the Baku Commissioners Square. Began a terrible shelling. The driver was really scared, opened the doors and invited everyone to run where they were looking. And suddenly, the man who had previously behaved not quite correctly and rudely joked - suddenly took himself in hand, quickly found his bearings - and brought our bus out of the shelling. I saw the shells fly. The windows fell down like sand. I remember this rumble. Our bus swung to the left, to the right, as in a Hollywood film. I fell to the floor and asked for forgiveness from all my students and even from the head teacher, whom I had been rude to long ago. And at the same time - from her first teacher, who gave me the first two in my life. And, probably. And the man brought us out of the fire with his skillful, professional, clear driver teams. He saved us. I do not know his name, but I owe him my life.

- What can you say about your students? Probably, their life has also changed ...

- A lot of people left. People scattered like feather grass seeds on our Donetsk steppe. Many went to the Crimea. And when I talk to my girls on Skype - very many of them cry, sob. They want to go home. Often they ask me a question: “What about there, in the village of Oktyabrsky? Are our swings still standing? ”But I can’t answer them that there is no swing, and the houses are twisted. That their childhood was the key to the struggle of adult uncles for non-existent ideas of the “Maidan”. I believe that such ideas cannot exist if children cry, if children's blood is shed. That the first blood of a Donetsk child, which was shed by Ukrainian soldiers, separated them from us. If children are forced to seek shelter for themselves, if they are driven from their native land, this must be judged. Many of my students have left. Someone from the Crimea calls, someone from other regions of Russia. Everyone wants to go home. They really want to go home. I cannot explain to them how it all happened ... The house was standing - and suddenly someone took it and destroyed it.

Russia gave them a helping hand, cherished them. For them, she became the second homeland. But their soul is drawn here - after all, they were born here. They cannot understand that virtual and real war are different. That there was a swing, there was a school, there was a palace of culture and ballroom dancing - and that was all, and now there is none of this.

26 May last year I went to class with my student - a little boy. Then I watched as the Ukrainian plane made a detour and flew towards the airport. He showered heat flares. I did not understand this then - then the students explained everything to me. This was the first shelling of the airport. I still did not fully realize that the war had begun, that it would bring death, destroy houses ... And so I got out of my pupil and sat at the bus stop near the Oktyabrskaya mine. A bus was driving past, stopped. The driver shouted: “What are you sitting? Tikay. Faster tick. And I sit and do not understand, whence so many bees and flies came from. They fly around, whistle and sing. It turned out that it is - fragments. So I am a civilian, a simple teacher, that I did not even understand that this is death

I covered myself with a textbook of mathematics by Galitsky and Goldman and thought that my favorite authors would save me. After all, the textbook was written by people who have already taught more than one generation of schoolchildren. Then I saw destroyed houses on TV ...

- What would you like to wish the students who went to school today?

- I want them to wish the most important thing - faith in their own strength. They are unique children. These are the children of war. These are children whose grandmothers and great-grandmothers survived that terrible 1941-45 war. And today's guys can appreciate life and death. Even sitting in basements, they understand the taste and sweetness of life. Because today you are alive, and tomorrow is unknown.

I think that these children will grow up strong, strong. They will rebuild Donetsk. They will be stronger than those that grew in the era of timelessness. We can’t even imagine what kind of growth this generation will give, how unique it will be. historical experience. 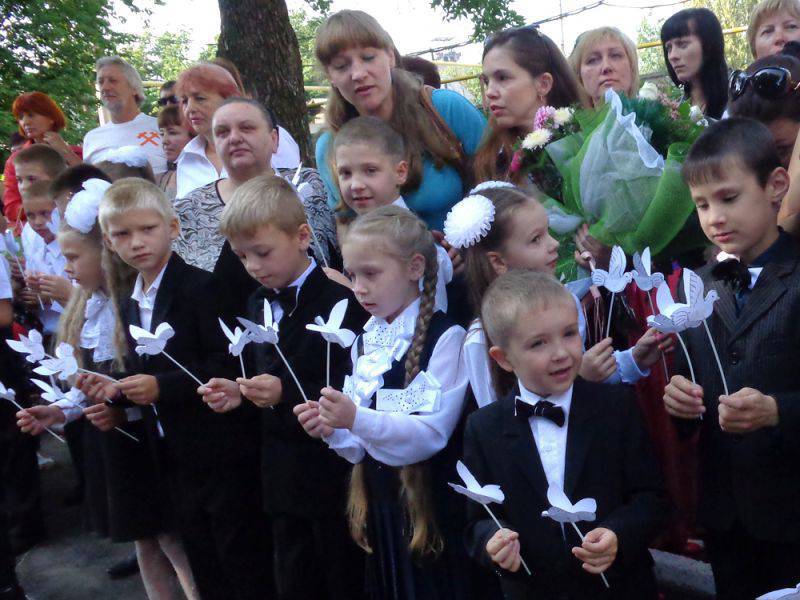 So, the new school year began, contrary to the war. Many times it is necessary to repeat these words - “despite the war”. Because this is true - too much in the People's Republics is done against all odds. Even the most ordinary things require considerable courage and mental strength.

Ctrl Enter
Noticed oshЫbku Highlight text and press. Ctrl + Enter
We are
Education, where are you rushing? .. About 40% "excellent students" on the exam in mathArtillery of the Korean People’s Army. Part of 3. Reactive systems
8 comments
Information
Dear reader, to leave comments on the publication, you must to register.