4 September 2015
5
Continuation of the article about the battle management system “Kombat”.
The first part is HERE.

“How the Ukrainian programmer created the software for managing the battle”.
Evgeny Maksimenko traded the comfortable office of an IT company with free snacks, comfortable chairs and entertainment for a modest two rooms on the outskirts of the capital.
They have nothing but cheap furniture, a fan and a poster on the wall.
Maksimenko took a long-term vacation at his own expense, refused benefits and works on 12-14 hours a day.
For what? For the past year and a half, he, with six enthusiasts he found on Facebook, has been developing real-time battle management software, Combat vision.

31-year-old specialist in automation systems of enterprises in a large Ukrainian IT-company in peacetime, adored to play airsoft.
He even founded with partners a couple of clubs of patriotic education, for example, Airsoft Real Military Simulation.
It was there that he first tried combat management software.
“We played toy war and decided to do something similar to the American systems. It is much easier to coordinate a team when you see what each of the players is doing, ”explains Maksimenko. 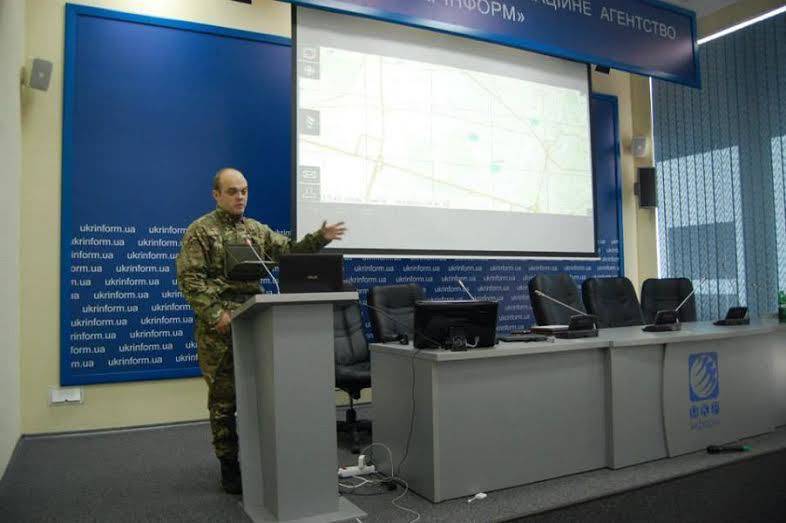 The author demonstrates the operation of the system.
Perhaps during the iForum in Kiev.
Pay attention to the tactical chest for the tablet.

When the events in Volnovakha occurred, he thought that since our military had nothing — no form, no means of communication, no means of exchanging information — the simplest version of the coordination system would suit them.
“Our software allows us to avoid friendly fire - this is when our own fire. And then he was 60%, ”recalls Maksimenko.

Creating an application
Back in 2012, he and his friends made an Android application for sharing locations, civilians have the same as Google+.
Some additional functions have been added to the military - the ability to inflict a tactical situation, correctly calculate the distance to and from an object (taking into account the terrain features), apply a coordinate grid, communicate and give orders.
Naturally, the system is protected.
For her, they made a three-level protection - they restricted access to the device itself, encrypted the data and channels through which they are transmitted.
“The most vulnerable point is the tablet screen with the password entered.
Even if the enemy intercepts the protected information, he will spend more time on decoding it than it will be relevant, but no one bothers the user to save a screenshot of the card, as well as take a picture of a paper map ..., ”says Eugene.

Revision of the military version is already a year.
Since this is a private initiative, the state does not allocate funds for it.
Everything is done for the money of private investors.
When asked about the amount of investment, Maksimenko is slightly embarrassed, but then says that it would be enough to buy a three-room apartment in Kiev (the price per square in the capital as of August 18 was $ 1,5 thousand).
“We never had a goal to sell the system to the state. We wanted to speed up the transfer of intelligence from soldiers to commanders. In those divisions for which we had enough money, the goal has been achieved, ”explains IT specialist.
With the money of volunteers from the David Arakhamy project * The People's Project guys bought laptops, tablets and peripherals.
* An activist of the Nikolaev Maidan and a member of the "People's Militia."

Lost in Translation
The biggest problem that has not yet been solved is the lack of a normal communication system with data transfer.
Previously, the military talked almost on the same walkie-talkies as the guards in the supermarkets.
Now the situation is slightly better, but far from ideal.
To be confident in 100% of some information, you need to see it personally.
Therefore, it is necessary to ensure adequate transmission of not only voice, but also photo / video.
This is possible with the Combat vision system.
Generals use fixed channels to communicate, and ordinary soldiers do not get such systems.

“We have equipped several regiments at the level of commanders of subdivisions, set up approximately 70 devices and this is only the beginning,” says Eugene.
In order to move to a lower level, on the one hand, there are not enough funds, and on the other hand, in combat, the tablets will only interfere with the soldiers.
Devices are purchased directly in China - it is difficult to afford branded secure gadgets, they are expensive and hold little charge.
Therefore, developers have to constantly communicate with representatives of manufacturers, reporting problems with the software.
But it takes a huge amount of time, so Maksimenko is looking for outlets for more contact manufacturers from the Middle Kingdom who can provide a direct dialogue with the engineers.

Two more reasons for the lack of widespread use of the system: the complexity of the initial setup and the low level of user training.
To use it, you must have at least basic knowledge of geography and military affairs, while many soldiers cannot even determine where it is north.
It also needs to be configured and assigned user rights.
If you make a mass system, then there will not be enough resources to train all the soldiers.
“We repeatedly tried to teach the guys, but then it turned out that one of them was demobilized, someone was transferred to another unit and the like. We had to re-go and teach new people, ”explains the developer.
And the military personnel are not too versed in gadgets and software.
Despite the simple interface of the system, it works well only where there is a pro capable of serving the complex as a whole.
However, Maksimenko is optimistic - lately more and more people understand the need for automation.
Even a year ago, he simply had to convey his idea to the top army leadership — after Maidan, many friends appeared in the highest echelons of power, who helped organize meetings with the right people.

The system can still be refined and refined.
“We did only 5% of what we could,” complains Maksimenko.
Ideally, integrate it into smart glasses and connect it with other systems.
But this is a distant future.
After the system is refined for the military, the developers hope that the military leadership, based on international experience, will assess the effectiveness of the use of automation systems and will be interested to provide their units on their own.
Then Evgeny Maksimenko will be able to return to a comfortable office and continue working in the largest corporation in Ukraine.
That only wants it?
End of article

Additional data that I collected. 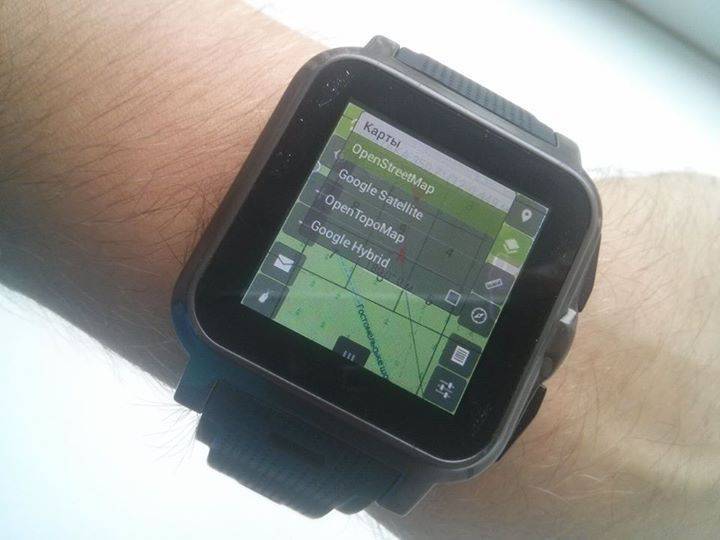 For our regular client from MI6 version of Kombat 0.0.7.
Py.Sy .: We are working on the version of MK-61 for Stirlitz.

Latest updates:
- The interface is redesigned for Android 4.4.
- New card management system by layers with automatic threading from online services.
- Unlimited cards
- New system of file-based loading of maps from the server (with further support of online OSM, General Staff and others maps)
- New optimized data transfer protocol capable of working on low-speed channels of digital radios.
- Advanced player stories events and messages.
- New improved chat and quick command system.
- New system of combat statuses of users and groups.
- Ability to separate rights to view labels and layers by groups and users.
- Genshtabovskaya grid.
- Support for the SC-42 cartographic coordinate system.
- Lock account on user request.
- Automatic creation of tags using range finders.
- Added map rotation mode in the direction of the review.
- The compass works correctly in any position of the device (not only in horizontal).
- Fixed error when calculating coordinates on large maps.

In the next update, users of the ComBat system expect:
- The system of applying intelligence on video from a UAV.
- Support for online maps on the mobile client.
- Voice chat chat.
- Improve the usability of all menus.
- System management icons on the server.
- Monitoring the parameters of the health status of each fighter.
- Automatic report of injury in case of deviations from the norm.
- Fixing the place of death, in case the device is removed from the body.
- Automatic user lock after death to prevent unauthorized access. 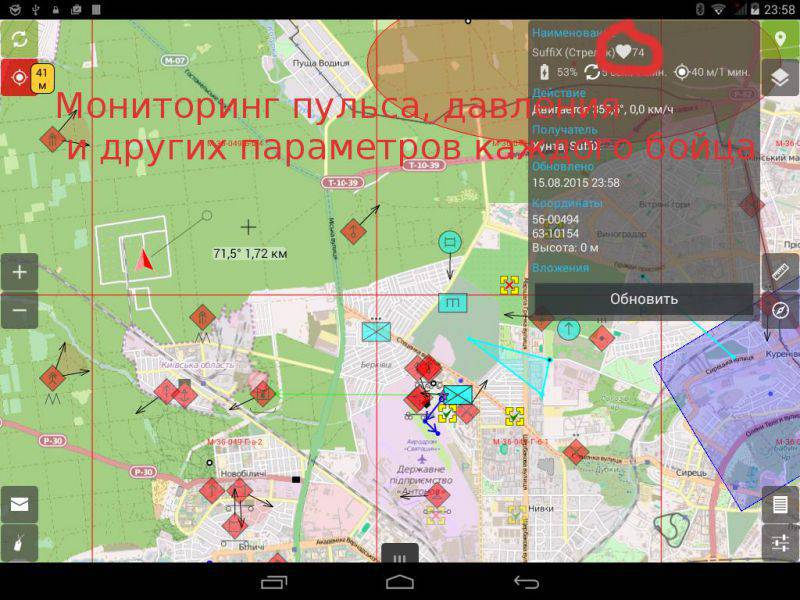 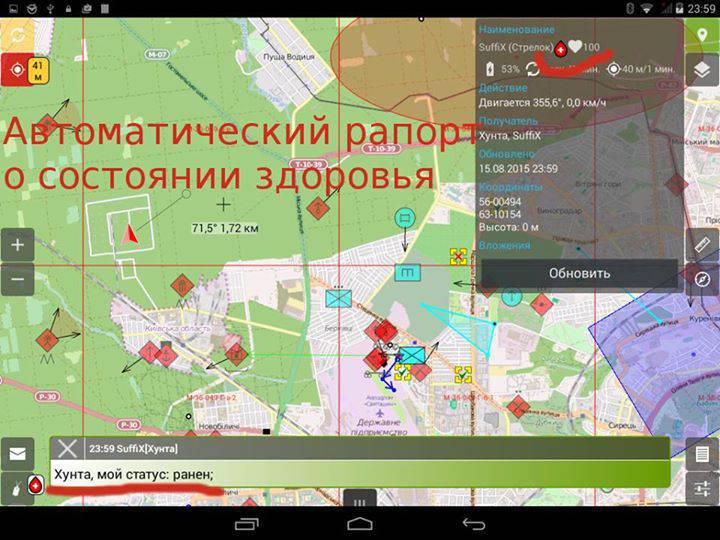 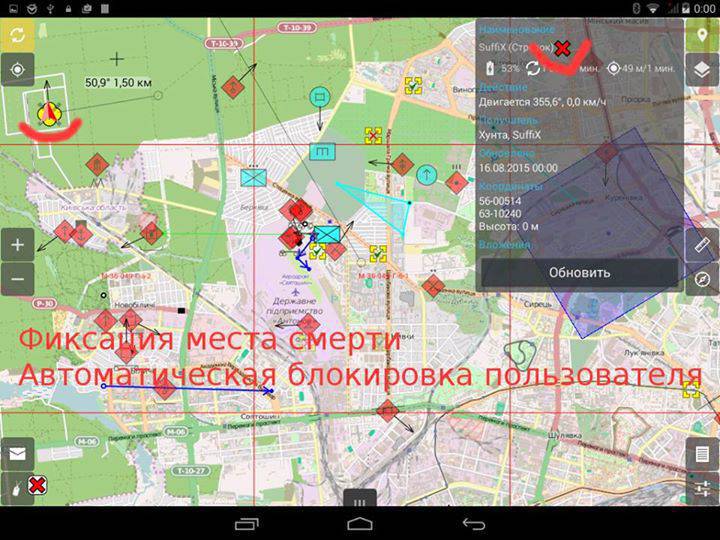 This system was created in Kiev and operates in the ATO area.
I have not decided to engage in hidden campaigning in favor of the Armed Forces of Ukraine, as some will think.
In my homeland, too, not everything is sweet, and even the laces are not enough in the army.
And I do not call to catch that Ukrainian programmer or attack the server of the system, as others decide.
To whom it is necessary - already in the know and countermeasures, I am sure, taken.

I just gave an example of the organization of popular assistance to the army.
And I’ll finish by quoting Russian State Duma Deputy Olga Batalina: “The main strength of any country is its people.”


System "Combat" - demonstration of the rangefinder


System "Combat" - a demonstration of work on a wristwatch.

We are in Yandex Zen
Control system of the battle “KomBat”. Part one
Control systems of the battle of the American army. Current position and future-oriented modernization strategy
5 comments
Information
Dear reader, to leave comments on the publication, you must to register.