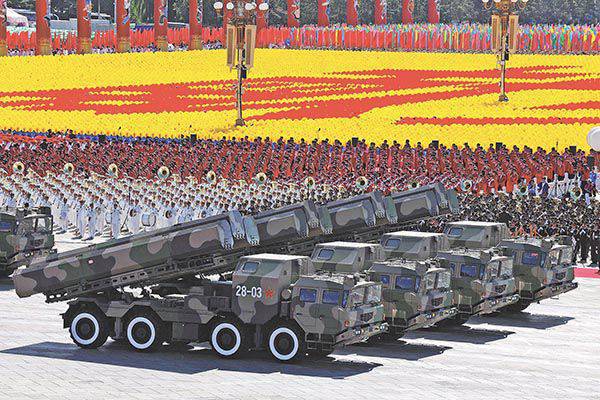 The Chinese armed forces consist of the People’s Liberation Army of China (PLA), the People’s Armed Police and the People’s Militia. They occupy an important place and play a key role in ensuring national security and the overall development strategy; they are entrusted with a glorious mission and a sacred duty to protect the interests of the country in the field of national sovereignty, security and development.
The PLA, the leading force of the armed forces of the People's Republic of China, consists of personnel troops and reserve units. Cadre troops are the basis of regular armed forces. They include land, naval, air forces and the Second Artillery Corps.

The main strategic tasks of the Chinese Army include: responding to a variety of emergency situations and military threats, effectively protecting the state’s territory, airspace, sovereignty and security in territorial waters.

Ground forces are mainly responsible for the performance of ground combat missions and are the main forces responsible for the conduct of combat operations on land. They consist of maneuverable combat units, border control and coast guard services, garrison guarding troops, and others.

In recent years, great progress has been made in the construction of the army arms.

Armored troops increase the pace of creation of electronic forces, the rate of transformation of motorized infantry into mechanized ones is accelerated, combat systems of assault are continuously improved with the help of heavy and light weapons, amphibious vehicles and airborne assault forces.

Artillery brigades develop weapons with a fairly high degree of informatization and new warheads, as well as form a tactical attack system throughout the depth of the firing line during the operation, which includes integrated combat forces responsible for reconnaissance, deterrence, attack and evaluation.

Anti-aircraft forces are accelerating the development of new radars, command information systems and medium-range missiles of the air-to-air type, thereby creating a new-type interception system based on air defense systems and guided missiles that have sufficient combat capability in combat with the enemy's air force.

Aviation the ground forces accelerates the transformation from aid and support forces to combat assault forces, the structure of combat forces is optimized, in accordance with the needs of the assigned tasks, formations are modularized, armaments, carrying capacity and technical characteristics of service helicopters are improved, which has already improved the capabilities of fire assault, cargo delivery to battlefield, as well as providing support and information support in battle.

The engineering forces direct efforts to create a new type of combat support forces, which are characterized by the unity of the front and rear, responsiveness and versatility, they also strengthen the construction of professional emergency response forces for disaster and emergency situations, resulting in an increase in the integrated capabilities of combat support and non-combat military tasks. character

Anti-chemical defense units are actively promoting the construction of an integration system for protection against nuclear, biological and chemical threats.

The naval forces are entrusted with the main task of conducting combat operations at sea. They are responsible for the protection of national security and sovereignty in the marine area, as well as for ensuring the maritime interests of the country. The naval forces consist of detachments of submarine and surface forces, aviation, amphibious assault, coastal defense detachments, etc.

In accordance with the strategic requirements of the defense of the near seas, the Navy, as a matter of priority, increase the level of modernization of complex combat forces in the near seas, develop advanced submarines, destroyers and corvettes, improve the equipment and equipment of the integrated digital information support, increase the ability to conduct maneuverable combat operations in long-distance development of cooperation in distant seas and countering traditional and non-traditional security threats. 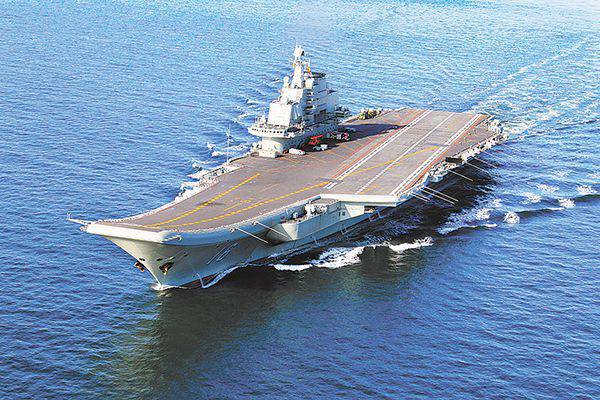 In September, 2012, the first aircraft carrier "Liaoning" entered service with the PLA Navy. In order to create a powerful Chinese Navy and protect the security of the country, the construction of aircraft carriers is given serious attention.

The powers of heaven

The air force responsible for air combat was created on November 11 1949. They are charged with protecting airspace security and ensuring the stability of air defense. The air force consists of aviation, ground defense forces, radar troops, airborne troops, radio electronic countermeasures, and others.

From the beginning of the 90 of the 20 of the 20th century, the PLA Air Force began to develop rapidly. Third-generation combat aircraft, third-generation ground-to-air missiles and advanced information weapons were successively introduced into service. In order to increase the country's defense capability in the context of informatization of military operations, PLA Air Force accelerates the transition from a strategy that implies exclusively "passive" defense of the country's airspace to a combination of defensive-offensive actions, including increasing intelligence capabilities and early warning systems, as well as an air offensive. Thanks to the efforts made in China over the past 60 years, the PLA Air Force has become a form of armed forces, possessing not only air defense capabilities, but also capable of delivering accurate and long-range air strikes, as well as strategic troop movements. 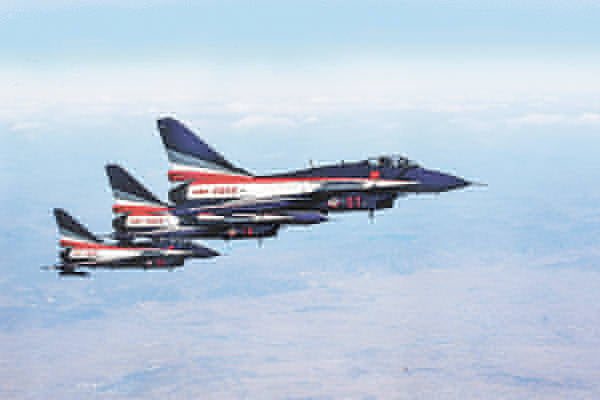 Fighters "J-10" in the aerobatic team "Bai" ("First August") during the flight training in the ranks. Photo: Zhang Pengyan, Xinhua
In accordance with the strategic requirements of the simultaneous development of defensive and offensive capabilities of the Air Force, they strengthen the construction of a combat system with an emphasis on intelligence and threat prevention, air attack, air defense and missile defense, strategic redeployment, develop advanced weapons, including ground-based combat aircraft The sky "of the new type and new radar, improve the early warning system, a network of command and communications, raise the level with strategic warning and deterrence, as well as the ability to hit targets at long distances.

The Second Artillery Corps (Strategic Missile Forces) was officially established on July 1 of the year 1966. The main tasks of the corps: restraining the use of nuclear by other countries weapons with respect to China, delivering a retaliatory nuclear strike if necessary and accurately hitting targets with conventional ballistic missiles. The corps consists of nuclear missile forces armed with nuclear and conventional ballistic missiles, combat support units, etc.

The Second Artillery Corps adheres to the policy of not using nuclear weapons first, the strategy of self-defense and defense, strictly following the orders of the Chinese Central Military Council and considering protecting the country from external nuclear attack as a key task. The PLA Second Artillery nuclear weapons on peaceful days are not aimed at any other countries. Conventional missile forces of the Second Artillery of the PLA are mainly tasked with delivering accurate strikes at important medium-range and long-range strategic operational targets of the enemy.

Armed police was formed in 1982 year and is the main emergency response team.

The armed police mainly perform the tasks of patrolling and guarding, resolving emergency situations, conducting anti-terrorist struggle, participating in the economic construction of the country, etc. In wartime, armed police assist the PLA in implementing law enforcement and defense tasks.

Armed units consist of internal guard units and police units. The armed police also include troops for the protection of public security in the border areas, fire and security detachments.

The main tasks are: preventing the enemy’s subversive activities, ensuring security, protecting important facilities, important national and international meetings and major cultural and sports events, as well as key sectors of airports, radio stations and enterprises of the national economy, national construction, important bridges and tunnels; their powers include ensuring the security of prisons and pre-trial detention centers, maintaining public order in cities or specific areas.

Detachments of the national militia

The people's militia is an armed organization of the masses, not divorced from production, it serves as the main assistant and serves as a key reserve for the PLA. Militiamen help in maintaining public order, conducting rescue operations and eliminating the consequences of natural disasters. The militia consists of regular and regular militias. Among the personnel militia detachments can be distinguished emergency response teams, joint air defense, intelligence activities, communications, construction, transportation, weapons repair, etc. Reserve militia units include combat and rear support teams.

Ctrl Enter
Noticed oshЫbku Highlight text and press. Ctrl + Enter
We are
Soldiers of the Middle Kingdom are torn into battle85 years of the People’s Liberation Army of China. What came to?
10 comments
Information
Dear reader, to leave comments on the publication, you must to register.