3 September 2015
81
Already the very first Tanks of the world (of those that actually participated in the battles) had cannon weapons, the purpose of which was the destruction of enemy machine guns. “Shoot fast, shoot low!” - It was indicated in the memo - an instruction to the English tank gunners. “Better your shell pours sand into the enemy’s eyes than whistles over his head!” The 57 mm caliber was optimal for this purpose. Not without reason, the Germans, the opponents of the British, put on their A7V 57-mm gun Nordenfeld, although there were other projects. In particular, it was planned to install a 75 mm cannon with a shortened recoil, however, not only were all orders for them painted, the German military was confused by the redundancy of these weapons. In their opinion, the “stormtrooper” would simply have no one to shoot at from this gun. The Russian military also reasoned that it was not without reason that not one of the projects of Russian inventors was adopted. And the point is not only in their technical imperfection. Frightened weapons: 203-mm howitzer and 102-mm guns. "Well, what the hell, the tank has such firepower!" And not without reason the French tanks "Saint-Chamonix", armed with 75-mm field guns, were used not so much as tanks, but as self-propelled guns. The Saint-Chamon 25-ton tank, which also had to have such a gun, did not go into the series. But the Renault FT-17 with a 37-mm gun proved to be the best. Moreover, the French modernized it throughout the 30s, and built all their other cars with an eye on this “warlike baby” - they were so impressed with its military successes. 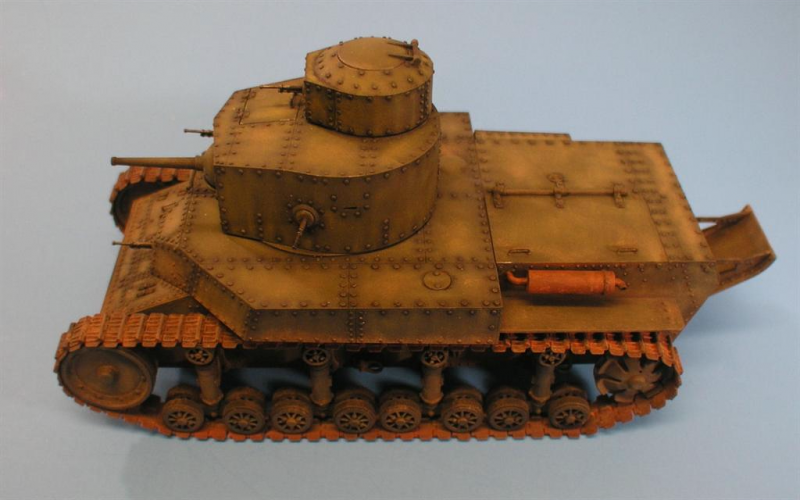 The first Soviet tank armed with an 45-mm gun was the T-24, which besides it also had a very powerful machine-gun armament, consisting of four machine guns. If the USSR had more of them, and, accordingly, we would have a more developed industry and ... less dependent on the "western experience" specialists, it was from this tank that a brilliant история development of the Soviet armored vehicles. And so ... there were too few of them and they came out too raw to affect something.

The mods on the new caliber 47-mm were again introduced by the British, and by their example 30-mm guns were also installed on Soviet 45-tanks. Again, it was believed that tanks were more likely to fight with infantry than with other tanks, so even Vickers Medium tanks were delivered to India without guns, only with machine guns. What for? But here the inertia of thinking clearly manifested itself. After all, if the infantry is the main objective of the tank, then both the 37, and 47, and even the 57-mm caliber are clearly insufficient. 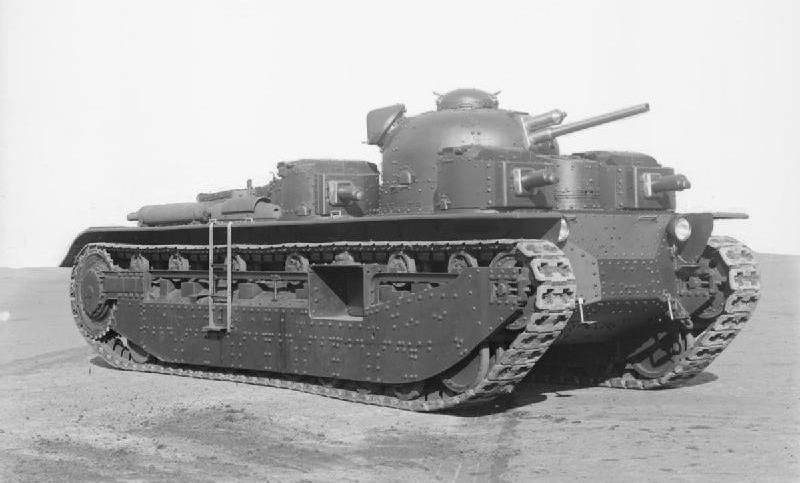 A1E1 Independent. Despite the impressive size, he had only one 47-mm gun and four machine guns!

And here our Soviet designers turned out to be more far-sighted than the British. They are on their multi-tower tanks "Vikkers-16 T" and "Independent", no matter what. continued to put the gun caliber 47-mm. Moreover, the same "Vickers" in the three towers had the following composition of weapons: a large 47-mm cannon and a 7,71-mm machine gun and two small 7,71-mm machine guns each. But the Soviet T-28 had a large 76,2-mm gun, a machine gun and two machine guns in the front towers in a large turret. True, in battle, it would be better not to face them. Still, the English gun had a greater flatness, a rate of fire and penetrating power. But. if we say that a tank is weapon against infantry (and in the 30-s the overwhelming majority of military specialists thought so), the T-28 should be recognized as more appropriate to such views than the British tank. Well, the "five-tower battleship" T-35 also became a more than worthy answer to the English "Independent" with its one and only 47-mm gun.

The Pzkpfwg-III Ausf A was armed with a short-barreled 37-mm cannon.

Surprisingly, in the pre-war years, the caliber of guns grew very slowly. The standard caliber of the French was 47-mm, the English 42-mm, in the USA 37-mm, 45-mm in the USSR, in Germany - 37-mm. As already noted, the same 75-mm guns were placed on such tanks as 2С, В1, Т-28, Т-35, German NBFZ and Т-IV, however the number of the latter was scanty, and all these guns were short-barreled. The Germans themselves, who were standing on the T-IV gun, were called “stubs,” the barrel was so short, and the speed of his projectile was only 285 m / s. That is, there is a colossal inertia of thinking, which once again proves that people are, in general, very dumb creatures. 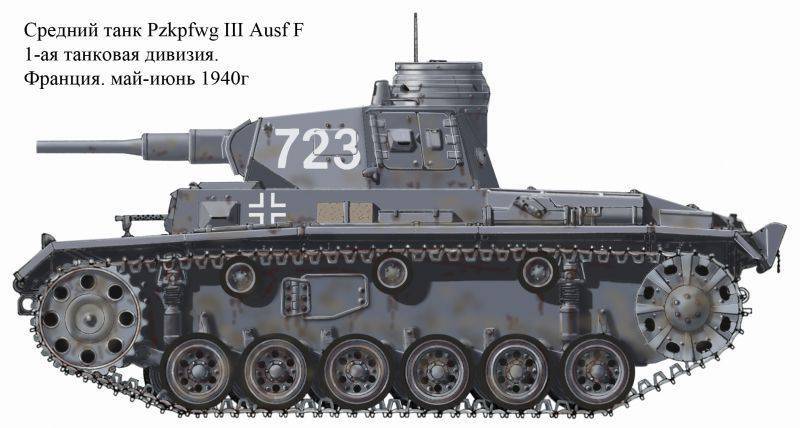 Pzkpfwg-III Аusf F. On it was already installed a gun caliber 50-mm, but also short.

Pzkpfwg-III Ausf M. Only this model received a long-barreled gun caliber 50-mm, but it was too late ...

But when did the "big war" begin. then everything became immediately obvious to everyone: the caliber of a tank gun must be larger, and she herself should have a long barrel, which ensures high speed to the projectile. It turned out that the guns are more profitable than machine guns in the fight against infantry. For example, in North Africa, the German T-IVs simply opened heavy, un aimed fire from cannons at the positions of the British, and that was enough to demoralize them, and then without loss to break through their trenches. The length of the gun barrel on the Soviet T-34 tank began to grow rapidly, and the same trend, coupled with an increase in caliber, became the mainstream throughout the war.

True, an attempt was made to put a long-barreled 34-mm gun on the T-57. Set, but it turned out that to meet with the German tanks, these machines at the front ... was not possible! I had to shoot at the already wounded cars. The result was great! But the "infantry" 57-mm shells were rather weak. That is why the modification of the T-34 / 85 and got exactly this weapon: powerful enough to fight with tanks, and with a good high-explosive projectile!

Simultaneously with the caliber began to grow and indicators such as barrel length and armor penetration projectile. 37-mm caliber guns were replaced by Germans with 50-mm. Then they had 75-mm tank guns with a barrel length, first 43, then 48, and finally 70 caliber.

Pzkpfwg V Ausf F was planned to equip 88-mm gun, and on the experienced tanks E to put even guns in 100 length and all in order to raise the armor, while maintaining a large ammunition.

In the United States, 37, 75,76,2 and 90-mm guns were used in the US (105 and 155-mm ACS), in England they switched from 42-mm to 57 and then to the traditional 75-mm and 76,2-mm in Sherman Firefly. It should be noted that the shells of all these guns had not only good armor-piercing qualities, but also traditionally had a good high-explosive and fragmentation effect. 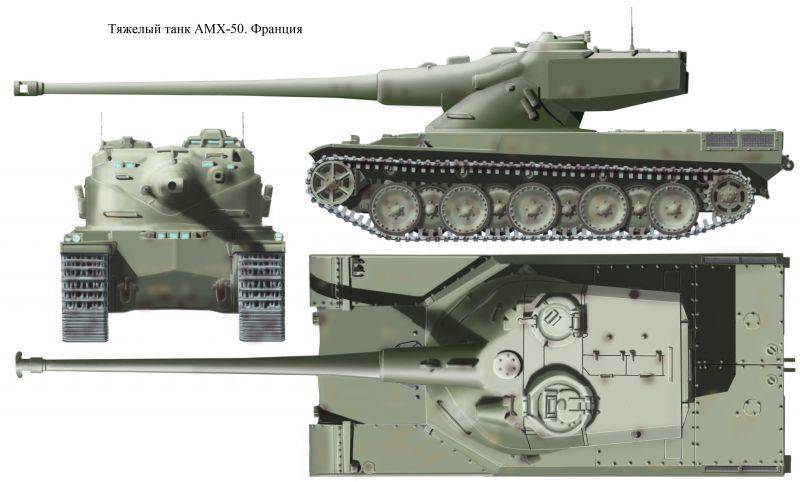 The war ended with the stabilization of tank calibers. The USSR settled on 100-mm, USA on 90-mm, England 83,9-mm (on some of the fire support machines there were 95-mm howitzers with a particularly powerful high-explosive projectile). True, in the USSR, a cannon was put in 122-mm on heavy tanks, and work was underway on adopting an 130-mm tank gun. Actually it was created, and tanks were already developed for it. But then, in fact, they refused from heavy tanks in the USSR, and did not make new cars with 130-mm. For a while, everyone thought that this would be enough for those calibers that are enough. But then the most lagging behind, that is, the British, created their famous tank gun caliber 105-mm L7 and all its other partners in NATO immediately began to put it on their cars, including the United States. The USSR responded with a smoothbore 115-mm caliber gun, and the British put a 120-mm cannon on their new machines. By this time, the gun of the same caliber was already on the American heavy tank M103 and experienced French cars. The Germans and Americans, and then the Japanese and South Koreans, got the same, but only a smooth-bore weapon. In the USSR, in response to this, an 125-mm smooth-bore gun appeared, which has not been losing ground for many years and has only been continuously improved. In the West, they wrote about the need to create an 140-mm tank gun, in our country tanks were tested on which were 152-mm guns. The Americans used the 152-mm gun on the M60-2 tanks and the Sheridan tank, but this is not exactly “that”. After all, these are guns - launchers. And the main means of destruction in them was guided projectile, so in this case, these tanks "do not count."

An experimental tank on the Centurion chassis with an 180-mm gun.

The British armed themselves with one of their experienced tank 180-mm gun (caliber guns of the cruiser "Kirov"), but it is clear that the matter did not go beyond the experiments. However, tanks with the largest caliber (not experienced, but serial!) Still existed, and the guns on them stood in as many 165-mm. These are the so-called engineering tanks M728, created on the basis of tanks M60. They, in addition to special equipment, are armed with this large-caliber short-barreled weapon, firing a powerful high-explosive projectile, designed to destroy various obstacles.

So it would look like a T-90MS tank with a completely non-standard 145-mm cannon. As you can see, because of its dimensions, there is not so much room in the tower for the crew and the automatic loader.

What rests the problem of growth caliber tank guns? For the British, especially in weight! On their tanks there is a rifled gun with separate loading, and already today a 120-mm shell with a tungsten core for it weighs at the limit of the possible. The same is true for 140-mm projectiles, which are very large and heavy. For our 152-mm shells, an automatic loader may well be created (there is an experience!), But ... many shells cannot be loaded into it! And the question is: can we expect slow growth in the future, “step by step” of gauges - well, let's say, we will again have an 130-mm caliber, and in the West 127-mm, and then “everyone will calm down” on 135-mm . Or someone wants to get ahead again and then the predictions about super-powerful 140 and 152-mm guns will come true ?! 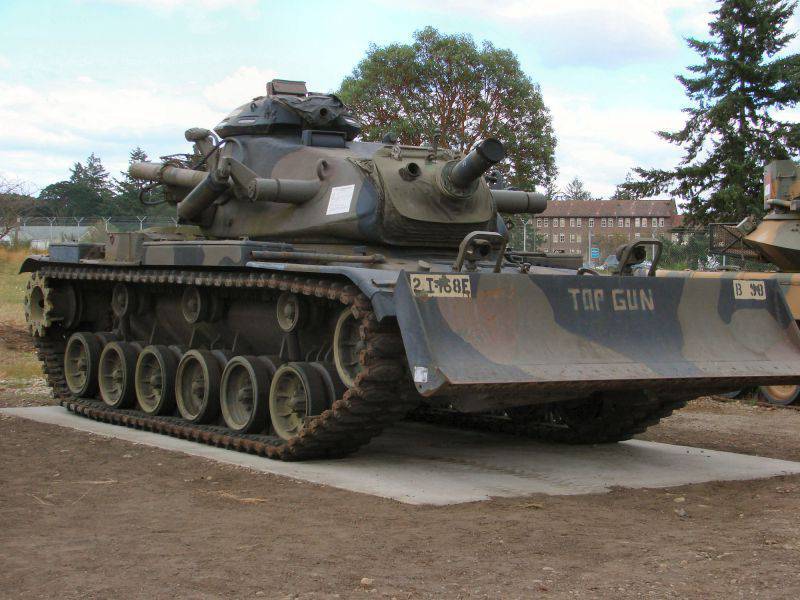 Ctrl Enter
Noticed oshЫbku Highlight text and press. Ctrl + Enter
We are
Wilhelm ArmorThe most machine-gun tanks of the world
81 comment
Information
Dear reader, to leave comments on the publication, you must to register.