Since the Third World War, the USA is already late 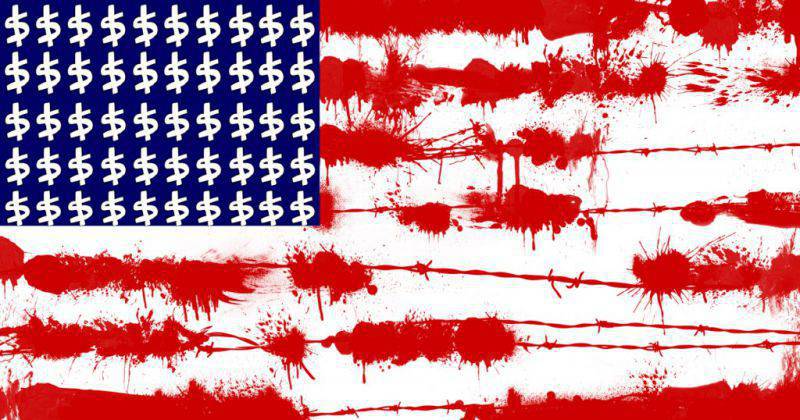 The war was needed by the United States to avoid the collapse of its own economy. But in a situation of market collapse, war will not help.

US earned good money on World War II, selling weapon to all countries of the world. The Soviet Union was sold exclusively for gold. And not a single bomb fell on the territory of the United States. Now the situation is quite different. Sowing chaos and instability around the world, the United States did get a retaliatory strike. What happened was what the Americans were most afraid of - the joint war between Russia and China against the dollar.

Pressure on China has sharply increased after May 9. In Washington, the Chinese leader Xi Jinping did not like the friendly talks in Moscow. There was a mess in Hong Kong that was quickly cooled. Maneuvers in the East China Sea, finally, accidents at chemical plants. The Chinese didn’t endure this and pulled the trigger of the First World Economic War. For which, in principle, prepared for a long time. At first, China devalued the yuan, which led to a collapse on the Shanghai Stock Exchange Shanghai Composite Index by 7,6%. Then China began to actively intervene in the foreign exchange market, using its reserves. For a short period, Beijing sold fantastic volumes of US bonds, and this affected the yield of bonds.

In just two weeks, China sold bonds for more than 100 billion dollars. August 24 has already been announced as Black Monday. One of the oldest among existing US stock indices, Dow Jones, has fallen by more than 200 points for four days. At the close of the stock exchange on Tuesday, 25 in August, Dow Jones was again in the red zone, setting a new anti-record. For the first time in my 119-year-old history The Dow Jones index rapidly dropped 1089 points to the 15.370 mark, which is a new anti-record for the entire existence of this index (the previous anti-record was recorded in 2008 year and amounted to 777 base points).

Since 19 August, the traditional synchronous movement of US stocks and bond yields has been disrupted. This way of life was maintained for almost 30 years, but that all changed in one day.

Russia and China get rid of US bonds for the second year. But slowly. For the period from December 2013, the volume of treasuries owned by Russia has decreased from $ 149,9 billion to $ 86 billion, as evidenced by the results of a study by the American Ministry of Finance and the Federal Reserve System. From the beginning of 2015, China has sold treasury bonds for $ 107 billion. And here is a breakthrough. For the last two weeks, as for the whole year.

Large volumes of US securities make the Chinese economy dependent on the United States. For the collapse of quotations beats on China itself. But the fact that this would have to be done was understood by everyone, so they got rid of the papers gradually. To minimize losses. At the end of June 2015, the volume of US Treasury securities on the balance of the People’s Bank of China is estimated at $ 1,271 trillion. But, losing the securities, China lost its influence on the United States. And China nevertheless decided to strike this blow. If securities are sold quickly, then they are worthless for others, but not for you. Therefore, China decided to no longer catch the financial wind that blows from Washington, but create the wind itself. Now that you have completed this step, you cannot stop. According to experts, maintaining a similar pace of sales will allow the People’s Bank of China to intervene for another 18 weeks.

Whether the US economy will withstand such a blow is unknown. More likely no than yes. Similar strikes against the US financial system have never been done. Therefore, it is obvious that it is too late to start a military conflict. According to experts, with each percentage of the markets falling, the amount of required injections grows by about 200 billion dollars. In ten days from August 19, the loss of capitalization of the American economy has already exceeded 1,6 trillion dollars. And the process is almost out of control. The dollar against the euro fell by 1,5% - to 1,12 dollar per euro. Gone up in oil prices. The Russian ruble went up too, having immediately won back 5 rubles from the dollar.

In this situation, the United States has to pay more attention to internal problems and curtail its external presence. Obama is almost multiplied by zero. It requires the immediate adoption of the budget and the next increase in the threshold of public debt. But this only contributes to the growth of distrust towards the United States. In the United States itself, mistrust is growing both towards Democrats and Republicans, and the ratings of the notorious Trump unexpectedly grow. I would not be surprised if Donald Trump becomes the next president of the United States, although it will be very out of the ordinary. This will destroy the entire political system in the United States. A small victorious war to save the Democratic rating in the elections, the United States will not succeed. And Ukraine is not the place where the Americans could win.

Poroshenko was not accidentally invited to Berlin. So that he leaves his military rhetoric, for in Moscow it was made clear that there will be no third Minsk, but there will be a surrender. Moreover, Moscow as the guarantor of the Minsk Agreements, which became a UN document with the light hand of Russia, in the event Kiev uses force now has the right to conduct peace enforcement operations like in Georgia in 2008.

And no one else will give money to Kiev. No one. The crisis. Money could be given by Russians and Chinese. But not this power and subject to real federalization, where the regions will receive real independence up to their own armed forces. Nobody has ever disarmed the winners yet. Therefore, there was talk of adopting a new Constitution, only the current Supreme Council is clearly not capable of this. A World War with guns and tanks will be gone. Black Monday August 24, 2015 has already become a kind of economic Pearl Harbor and is likely to go down in history as the beginning of the First World Economic War. And if the United States loses in this world economic war to Russia and China, in Ukraine everything will be Donbass. I often saw such inscriptions in Kiev on the walls of houses. They apparently wanted to give a negative meaning. And present as a threat. But time is the chief judge. And the meaning is sometimes reversed. Now it will be salvation.

We are in Yandex Zen
The golden vector of Chinese politics
"Black" gold "dragons" and the US Federal Reserve. Part III
65 comments
Information
Dear reader, to leave comments on the publication, you must to register.