As Zrada with Peremoga ganboy engaged

1 September 2015
35
What Ukrainians have learned to do is to promote show projects. Sometimes even I get the impression that Ukrainians sing better than Russians, Cossacks are all completely Zaporizhzhya. Well, and so on. Who from the famous Russian artists do not touch, Ukrainian roots are found. And in fact, if you look, the great ones are really piece, and more mediocrities. But untwisted. 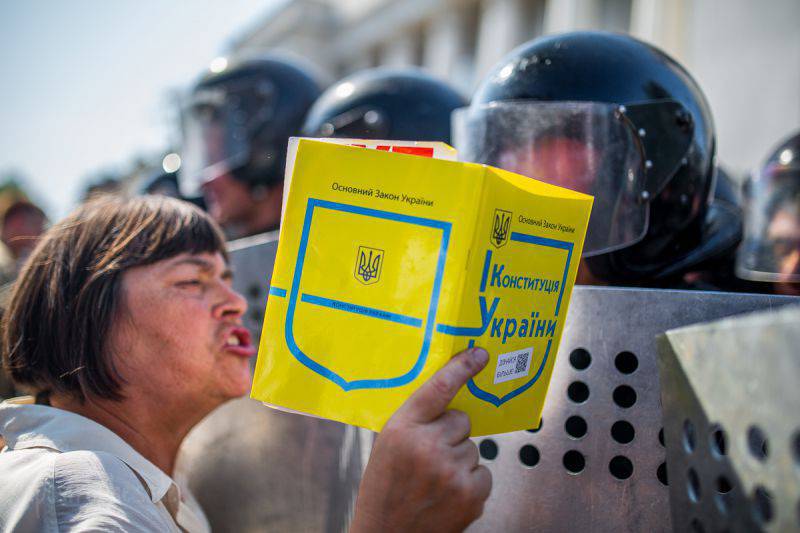 In the same way, according to the same laws of show business, they announced "historical“a meeting of the Rada of Ukraine on the last day of summer. What didn’t we know a few weeks before ... From traditional harassment and persuasion from politicians to Putin becoming an associate of Lyashko, Svoboda and others. Even Tymoshenko was in the“ Putin henchmen ” For some reason, it was Putin who became the main opponent of the decentralization of the Ukrainian government, and it seems like he didn’t say a year and a half about Russia's desire to preserve a united Ukraine.

Even President Poroshenko noted. Such intrigue let in every interview and just in the speeches at the meetings that I wanted to save the calendar right now from unnecessary, "in vain lived" days.

In short, I decided to watch this show. Not every time "historical" events happen. Not every time you can just “enter” the history like this ... More often, especially in Ukraine, you enter into something else. I confess, I haven’t prepared chips and beer. But in vain. It would be just right. But he looked, because of what is the whole performance. And what is the impetus or zrad coming Ukraine.

Well, firstly, the Ukrainian deputies, like ours, do not really understand everything from the first time. They are the laws that will take, read several times. It is called this - the first reading, the second ... and further down the bill. So far, everyone will not understand what and how. And today's reading is the first. In other words, so far no one and nothing has understood this future law.

And secondly, the law is really interesting. Directly revolutionary such a law. Purely Ukrainian poshiba. Especially for readers, I’ll open this one a bit more ...

According to the explanatory note to the draft law, the document provides for the amendment of certain provisions of the Constitution of Ukraine regarding the administrative and territorial structure. In particular, it is fixed that the territory of Ukraine is divided into communities. The community is the primary unit in the system of administrative and territorial structure of Ukraine.

Also, the draft law stipulates that the division of powers in the system of bodies of local self-government and their executive bodies of different levels is carried out according to the principle of subsidiarity, which corresponds to the European Charter of Local Self-Government.

The material and financial basis of local self-government is fixed. In particular, it is determined that such a basis is land, movable and immovable property, natural resources, other objects that are in the communal ownership of the territorial community; local taxes and fees, part of national taxes and other revenues of local budgets. At the same time, it is proposed to determine that the state ensures the commensurability of financial resources and the scope of authority of local governments, defined by the Constitution and laws of Ukraine.

“At the same time, decentralization does not mean a weakening of the central authority in such matters as defense, foreign policy, national security, the rule of law, respect for human rights and freedoms,” the explanatory note to the draft law emphasizes. That is why, in order to supervise the observance of the Constitution and the laws of Ukraine, local governments are invited to introduce the institution of prefects.

The project stipulates that the prefect appoints and dismisses the position on the proposal of the Cabinet of Ministers of Ukraine President of Ukraine ". (I quote the official message of the Rada.)

I think that readers, having read the text of the explanatory note, were a little taken aback. They think that the author is now exactly "gnawing and chewing." And they are mistaken. To be honest, I do not really understand this "restructuring". It turns out that the current rural head will become a communal head. And everyone who is now in the "heads", will sit on his neck already.

And the answer to the most important question about what is being offered to Donbass, I found the main developer of the new law, Pan Stepan Kubiva.

"With regard to the conditions of Donbass, the project only suggests the possibility of a specific order of implementation, I repeat, local self-government in separate administrative-territorial units of the Donetsk and Lugansk regions, which will be determined by a separate law, and does not provide a special status for Donbass."

In short, Donbass will not get anything. And these changes are purely cosmetic properties. For Europe, Pan Poroshenko is trying.

I repent, for the "concert" is not prepared. I lost it somehow from 90 to parliamentary shows. So I watched and listened without additional "pleasures."

On the "warm-up" was the ensemble of Pan Lyashko companions. The deputies, beautifully dressed up in the folk "embroidery", took their places on the tribune of the Rada. In the hands of different "popular" tools. Spoons, mugs, etc. It looked very colorful, I must admit. But all the time I wanted to wait for the bandurists and dancers to come out.

The ensemble began its performance at the same time as Speaker Rada Groisman. An interesting directorial find. Speech of the speaker about the opening of the meeting under the constant monotonous "Ganba". Probably, such a “background” was needed to enhance the “sensual” effect of the phrases of Pan Groysman. But this background had a sleeping effect on me.

And then all the performances in the same style. The only serious emphasis is made for Mr. Shushkevich, the son of the one who does not know. The old man "shook old". Slipped about the betrayal of Ukraine by Europe, compared Ukraine 2015 and Czechoslovakia 1939. He urged not to take the law so necessary for Russia.

Well, after the vote, when the law was passed in the first reading, the director's idea became clear. In the final, the choir performed with a traditional mass question: Even, did Ukraine not die? And the majority of deputies asked about it. Mass "choral" question as the apotheosis of "ganby" ... Impressed.

He sat and thought, why was there so much advertising? Why so much PR? The answer, whose ears stick out so that it is impossible not to stumble, does not suit me. Nonsense with the alleged solution of the problem of Donbass and the implementation of the Minsk agreements, as well as the exact same nonsense about the "Europeanization" of local self-government for the average person. To put it mildly, “shut the throats” of the patriots on both sides of the conflict. Let them digest.

The answer was found an hour and forty-five minutes after the meeting began. Or, 45 minutes after closing. This is anyone. And the answer is traditionally Ukrainian, bloody. One national guard has joined the “heavenly hundred” and more than 80 people with various injuries in hospitals and hospitals.

Poroshenko did not just come to the parliament to discuss such an important issue. It seems that the script was written with exactly the consequences that occurred. The authorities knew that the "atoshniki" would definitely come to the Rada. Even the presence or possible presence of grenades and other weapons counted. So the national guardsmen were set up according to the already “played” scenario. Only then it was "Golden Eagle".

It so happened that this event I saw live. Channel 112 broadcast blocking deputies in the parliament. Speeches of deputies, Tymoshenko’s tears about the fate of Ukraine and so on. Including the explosion. I was struck by the coherence of the actions of the guards. Calm Honestly, I did not expect such professionalism from them.

As a result, the arrests (at the moment more than 30 people), the strengthening of the National Guard soldiers APU. It seems to me Poroshenko made it clear to opponents that he does not intend to joke. And Yanukovych does not look like. He will not allow any ceremonies and other discussions. This means that all these "Tymoshenkos and Lyashka" can say anything, but the 300 votes will be on the next ballot. Or there won't be these very "lyashkov" ...

And for supporters of the new Maidan, the “demonstration” of the capabilities of the National Guard is intended. Poroshenko showed that all these "atoshniki" and "cyborgs" should quietly leave or die in the ATO zone. Their power is not afraid.

On the whole, there was a steady impression that the Ukrainian president had launched an offensive. Anyone who still hopes to change something in the country after the local elections, indicated their place. The soloists were and remain Poroshenko and the company. All the others are nothing more than dancers or background vocals. And the Ukrainian people-the usual wordless extras. From which someone will be lucky to "light up" on a close-up. The rest will be just a crowd ...

Ctrl Enter
Noticed oshЫbku Highlight text and press. Ctrl + Enter
We are
Results of the week. "Who you are lucky, in fact, and will carry a cock, and such a bird as you, I, too, will rush!"Results of the week. “You are already indebted to the sea: neither the bottom nor the coast”
35 comments
Information
Dear reader, to leave comments on the publication, you must to register.