August 31 2015
3
At the Luga training ground of the Leningrad Region, the tactical exercises of the motorized rifle, artillery brigades and army completed aviation Western Military District (ZVO). It is noted that motorized rifles arrived at the training ground located near St. Petersburg from the Pskov region. The press service of the western military district reports that the military practiced maneuvering defense to repel the forces of the advancing conditional enemy. According to the legend of the teachings, the conditional opponent had three times superiority in manpower.


To monitor the situation on the ground, unmanned aerial vehicles Orlan-10 were used.

From the press service of the ZVO:
The fire from self-propelled howitzers “Msta-S” and “Gvozdika” destroyed the command posts and suppressed the artillery batteries of the conditional enemy. Multiple launch rocket systems "Hurricane" carried out remote mining of the area and hit the advancing reserves.
In turn, the motorized rifle units repulsed the attack of the motorized infantry of the conditional enemy and completed its defeat with a counterattack supported by Mi-24 helicopters of the ZVO army aviation. 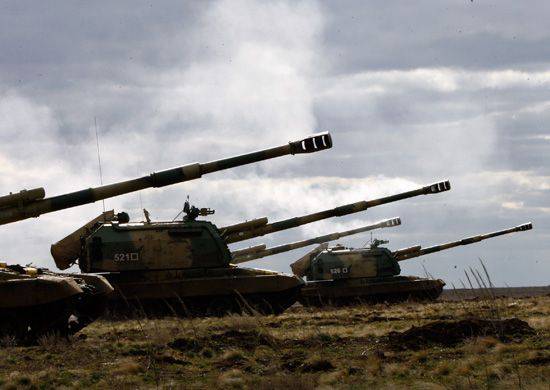 More than 1 thousand troops, dozens of units of military equipment, including aircraft: UAVs, Mi-8 helicopters and Mi-24 helicopters were involved in the exercise at the Luga proving ground.

The main task of the exercise was to improve the command skills of the officers and the coordination of the various branches of the military.

Ctrl Enter
Noticed oshЫbku Highlight text and press. Ctrl + Enter
We are
The action “Military service under the contract is your choice!” In Rostov-on-Don: future contract servicemen, exhibitions and “Russian Knights”Russian military personnel landed on the Baltic coast as part of the exercises ZVO
3 comments
Information
Dear reader, to leave comments on the publication, you must to register.