1 September 2015
65
The All-Russian Public Opinion Research Center published the data of the next poll devoted to the attitude of Russia and the United States, calling its survey as follows: "Russia and America: yesterday, today ... Tomorrow?" At the same time, VTsIOM immediately reports that the “perestroika” opinion of the citizens of our country, which basically defined the United States as a partner and even friendly state, almost completely gave way to a diametrically opposite view of the States.


VTsIOM experts note that the majority of the Russians surveyed have the United States associated with something extremely negative. People call the States a claimant for world domination, an aggressor and a major provocateur. At the same time, another “status” of the United States is called - it is a hostile state of hostility.

59% of respondents stated that they regard the current US authorities as extremely hostile towards Russia. For comparison, a year before the collapse of the USSR, 35% of the country's residents who participated in a similar survey had the same opinion.

When the respondents are representatives VCIOM asked what associations the phrase “United States of America” causes them; more than other survey participants answered: “Obama”. The second place in terms of popularity of the associations is “negative characteristics”, in the top three opinions-leaders - “aggressor and enemy number one” (according to 4,% of respondents presented exactly these options).

Among other answers to this question were the following: “evil”, “hatred”, “heartless, immoral people”, “fast food”, “world gendarme” and even “stupid Americans”. The answers in the style of “country of free people”, “rich country”, “military power”, “brands in the world” sounded less often.

The second question was the question of what, in the understanding of Russians, is best characterized by the United States? At the same time, VTsIOM presents an interesting comparison with the responses of the 1990 sample of the year. In the first place in the 2015 year - two answers "This is a country of high crime and moral decline" and "This is a country where there is no human warmth in relations between people." Both answers are for 15%. Only in third place is the answer of the Russians that the United States is a country with a high standard of living (12%), and that this is what should be perceived as their main characteristic.

In 1990, the top three characteristics of the United States looked like this.

This is a country with a high standard of living - 35%.

Almost three times the decline in those who believe that the main characteristic of the United States is a high standard of living, says, perhaps, that there is much more information about the States today than in 90. In 2015, it is well known that in America there are tens of millions of citizens who live below the poverty line, and this is true, and not at all “soviet propaganda”, as it was broadcast during the perestroika and early post-perestroika era.
This is a country where success depends on personal efforts - 20%.

In 2015, such an answer was given only to 7%, obviously realizing that the efforts of some (Bush or Clinton, for example) for some reason lead to success in the USA more often than the efforts of others ... Thesis about the “American dream” when someone that of the Americans began to collect Pepsi banks and earned his “first million,” which is perceived in Russia as a Hollywood tale.

This is a country of advanced science and technology (15%).

In 2015, this characteristic was appreciated by 7% of the surveyed citizens of the Russian Federation. Apparently, even here objective information did its job, since it became well known that “invited” Chinese, Russians, Indians, etc., increasingly work for American science and technology, and the scientific system has recently become the first turn into a kind of scout campaign for the "purchase" of talented young scientists and engineers in other countries.

As the third question of the sociological research, VTsIOM proposed to the respondents that:

How does the US government relate to Russia: friendly, not very friendly or hostile?

Only 3% of Russians in the 2015 year called the US attitude towards Russia friendly.

In the 1990 year, when it came to the attitude of the United States to the USSR, everything was completely different. So, the answer "friendly" gave 35% of respondents. The “hostile” rating was voiced by the entire 2% of respondents 25-year-old.

Representatives of the most "democratic" radio station of Russia - the radio station Ekho Moskvy - could not get past this poll and its results. On Ehovskom site A question has arisen as follows:

Which country is more immoral and soulless?

The very formulation of the question already attracts special attention. It turns out that "Echo" measures the immorality and lack of spirituality by whole countries ... This is the scale! ..

At the time of the preparation of the material, the survey was not yet closed, and 1836 people via the Internet and 247 took part in it by telephone. The “Echo” audience worked in a “planned mode”: The overwhelming majority of the respondents (83% - the Internet and 81% - the phone) about an hour and a half after the start of the survey believed that it was immoral and unconscious - Russia. (By the time of publication of the article on "IN", the result of the Echo poll could have changed somewhat). 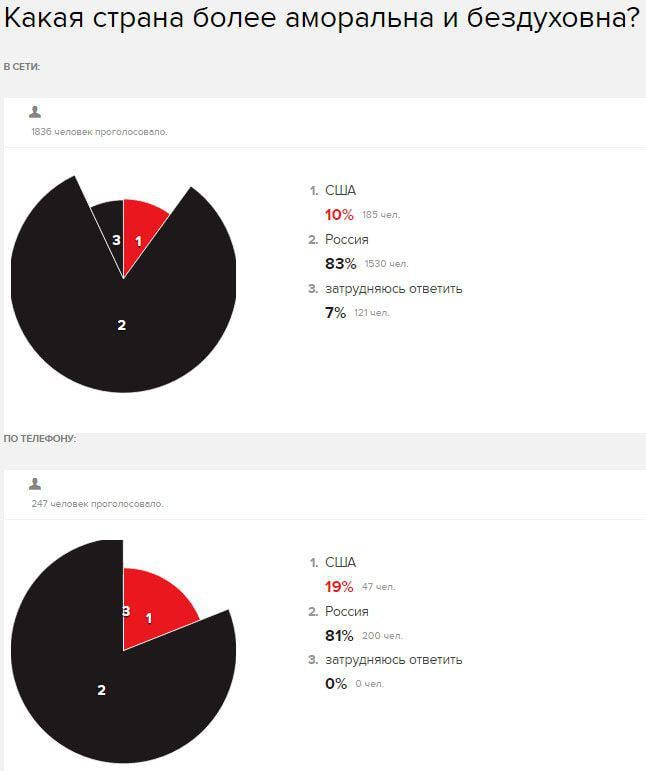 In general, everything is predictable both in relation to the results of the VTsIOM and in relation to the results of Echo. Both of these options show that statistics, how to say it more softly, are windy things. - It depends on who decided to use these statistics, for what specific purposes and what resources it has for this ... It turns out that in addition to hot, cold, sanctions and information wars, there are also “statistical” or “sociological” wars ...

We are in Yandex Zen
Situational analysis of the death of the MH17 flight (Malaysian Boeing 777), made on the basis of engineering analysis from 15.08.2014
Announcement: Poll "Evaluation of state-political figures - 2013"
65 comments
Information
Dear reader, to leave comments on the publication, you must to register.