1 September 2015
54
He wants, but can not - that is the leitmotif of the latest statements of Angela Merkel. Germany would like to stop the sanctions policy against Russia and even return to constructive relations, but the lack of “framework conditions” prevents it from doing so. Who drove the angel into the framework? .Fat Obama? Or Poroshenko himself?


Speaking in Vienna on the occasion of the 60 anniversary of the German-Austrian Chamber of Commerce, Angela Merkel announced with sadness that the European Union can not yet lift the sanctions against Russia.

With even greater sadness, Frau Chancellor reminded the crowd that she sees: the sanctions affected a number of companies. “Therefore, of course, we want to achieve such political framework conditions that would allow us to lift the sanctions,” the Chancellor quotes. "Deutsche Welle".

What hinders the achievement of “political framework conditions”?

Angela stressed that the German government wants to return to constructive relations with the Russians: "We want partnership relations with Russia, we have so many international problems."

But if you thought that the international problem of Germany and Russia is Ukraine, then you were mistaken.

Merkel immediately declared that Moscow could play an important role in resolving the conflict ... in Syria.

The statement was tough enough - quite in the spirit of the German Frau. She even refused Moscow common sense.

“We also want to include Russia, give it the opportunity to also participate in our negotiations so that it listens and finally follows the course of common sense, because without this it will not be possible to succeed,” Merkel quotes. Interfax - Ukraine.

The German Chancellor supported her stern speeches with data on her own monitoring of the situation in the Donbas. According to her, she monitors the situation in Ukraine and the information from the OSCE observers. The latter "report that they are not being carried out by the separatist agreement, drones are flying, military equipment is not being diverted."

So, let us add on our own, drones are flying, technology is around, hordes of separatists, and Moscow is not friendly with the mind. Uncertainties did not happen: the Russians are still to blame. That they cornered Angel, sorry, in the frame. Angela and the German business would like to lift the sanctions against Russia, but the Russians, who are not capable of thinking sensibly, do not allow the Germans to do this. 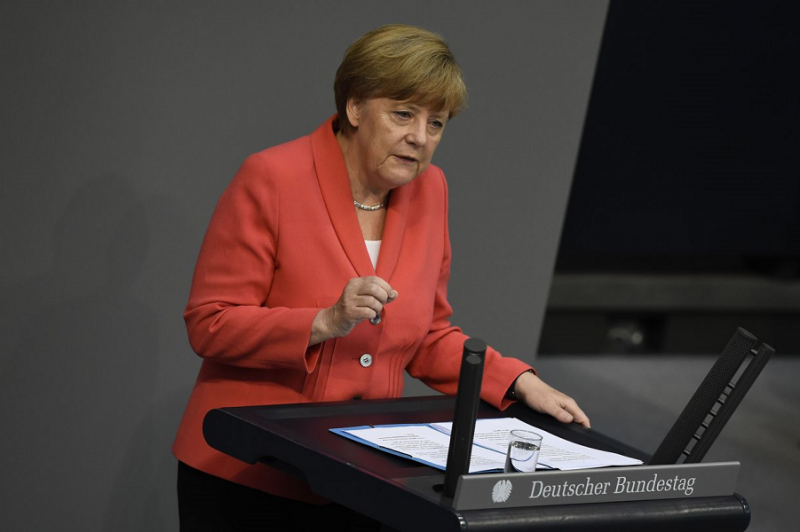 In fact, Angela and the suffering business do not allow this to be done by the overseas uncle Sam, for whom the disintegration of Ukraine, the everlasting civil war and the weakening of Russia there is like a sponge cake with jelly and meringue for a fat sweetie. Without losing anything from the sanctions against Russia, Washington weakens not only Russia and Ukraine, but also Europe, which considers not profits, but losses. Only one should be strong in the world - the world star-striped hegemon.

Therefore, one should not expect that the position of Angela Merkel will change after 1 September.

A few days ago, a regular meeting of the contact group on the settlement of the conflict in eastern Ukraine took place in Minsk. According to TASSNegotiations have shown that the parties to the conflict can, if they wish, agree.

However, progress was not achieved on key aspects of the negotiations. On the other hand, the advantage is that all the members of the contact group expressed their intention to achieve a cease-fire in the Donbas by 1 September. This was said after the talks, the special representative of the OSCE Chairman, Martin Saidik.

“The contact group considers it necessary to ensure a sustainable cease-fire on the line of contact for the first school week,” he noted.

Saidik added that everything must be done to ensure the safety of schools: "In this regard, the parties must exchange information about their exact location."

"This proposal received a response from all sides, and there is hope that we will be able to stop the shelling from September 1," Tass quoted the plenipotentiary of the Luhansk People's Republic, Vladislav Dane.

The plenipotentiary of the Donetsk People's Republic, Denis Pushilin, confirmed that this idea received full support.

Thus, to stop the warring parties from the shooting will help the beginning of the new school year.

It is difficult to judge how much the new suspension of fire in the conflict zone can contribute to the further negotiations of the parties in the format of the Norman Quartet and how the results of the upcoming talks will affect the sanctions policy of Germany, acting with an eye on Washington's decisions.

Probably not reflected in any way.

Even if the LNR and the DPR suddenly stop fighting, give up on Poroshenko and merge in peace with Ukraine within the framework of some kind of “Minsk agreements”, Angela Merkel will still not disable sanctions against Russia.

After all, Moscow has not one fault in front of Ukraine, but two. So says the West.

We should not forget about the speech of the German Chancellor from 10 in May 2015, which Vladimir Putin had to listen to. The day after the Victory Parade.

"The criminal annexation of Crimea, which violates international law, and the armed conflict in the east of Ukraine have seriously undermined our relations", - said that day Frau Merkel.

Therefore, it is clear that Russia will be cut off sanctions only when the “criminal” Moscow follows the “course of common sense”. What is the course, Angela made it clear 10 May: stop the conflict in the east of Ukraine and return the Crimea to the Ukrainians.

By the way, Angela is not original.

To summarize: following the “pacification” of the LNR and the DPR with Ukraine, which Moscow, Germany and the United States are supposed to miraculously organize, Germany and the United States are waiting for Putin to return to the Crimea happy Poroshenko. It is desirable that the Crimea at the time of reception was repaired, painted and landscaped, and its inhabitants would meet the liberators with flowers.

This is the culmination of the play.

But the outcome: Angela give the Nobel Peace Prize.

And after that, she thinks about the lifting of sanctions from Moscow.

Observed and commented on Oleg Chuvakin
- especially for topwar.ru
Ctrl Enter
Noticed oshЫbku Highlight text and press. Ctrl + Enter
We are
Project "ZZ". The case of Angela Merkel lives and winsResults of the week. "Of course, he is guilty, but he ... is not guilty ..."
54 comments
Information
Dear reader, to leave comments on the publication, you must to register.