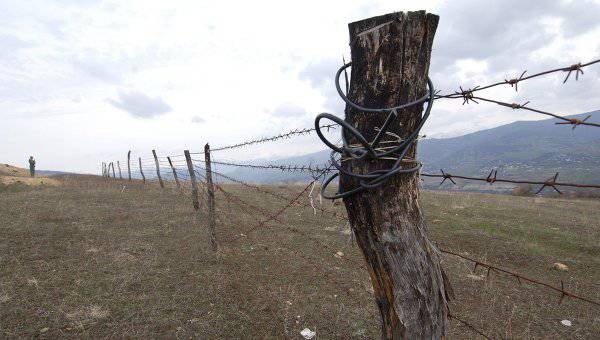 Decided to visit South Ossetia. I wanted it for a long time, and the case fell out now - in order to go completely to the void, I am not so much a journalist. And then it coincided that a friend here on a business trip and questions where and how to get settled, disappeared by themselves. In general, I decided - and went.


At the airport in Vladikavkaz, a taxi driver immediately approached me, and as if we had parted just yesterday and asked: “Are we going?”. Of course we are going, what questions could there be? It turned out that the taxi driver's name is George, he is 36 years old and that he has been taxing his entire adult life - he says that, by and large, there is nothing special to do in his native Beslan. He told me that there are a couple distilleries and some other bent enterprise. One of those very vodka factories, by the way, came upon us along the way and looked very modern from the outside. 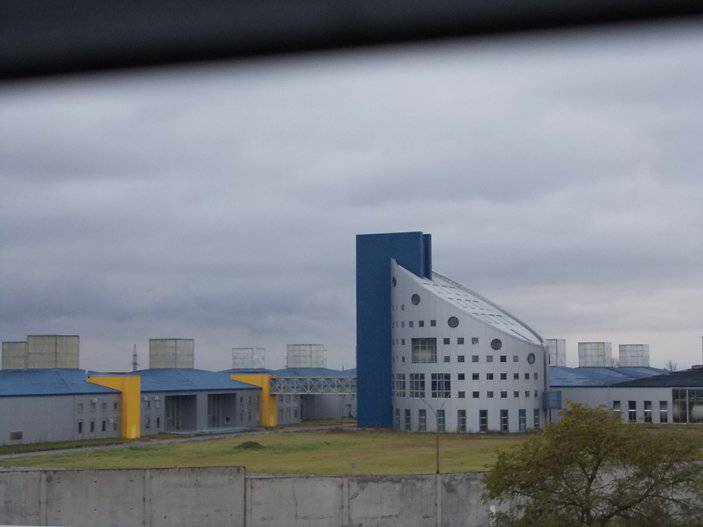 The fact that Vladikavkaz Airport is located in the very, tragically famous Beslan, for me, the man who first came to the Caucasus, turned out to be a small discovery. 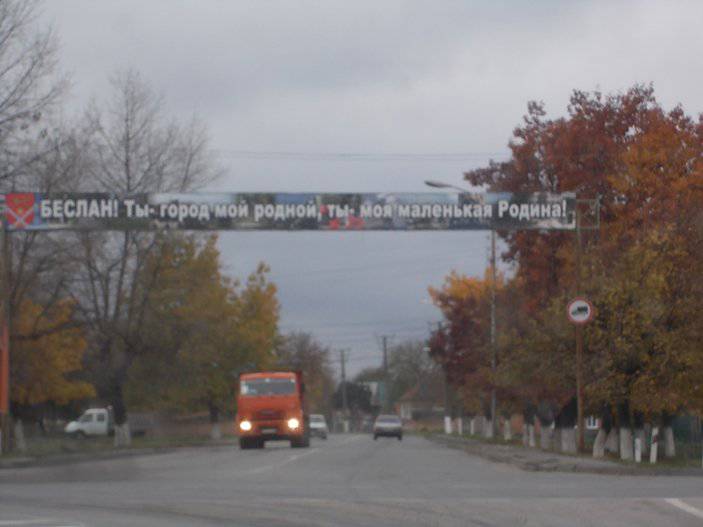 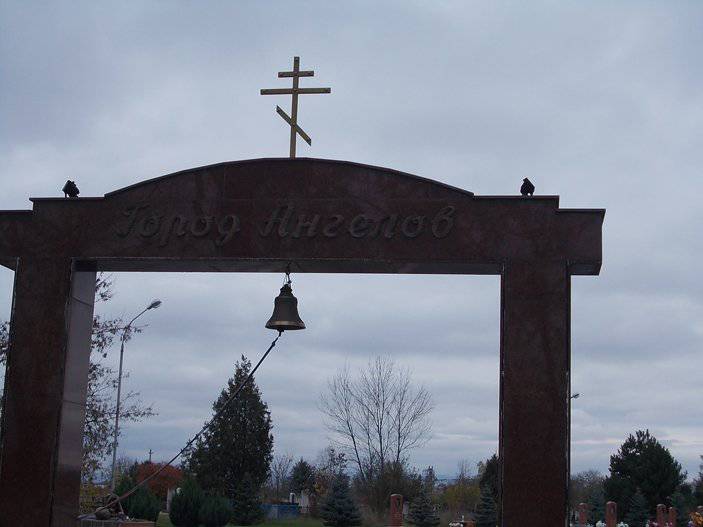 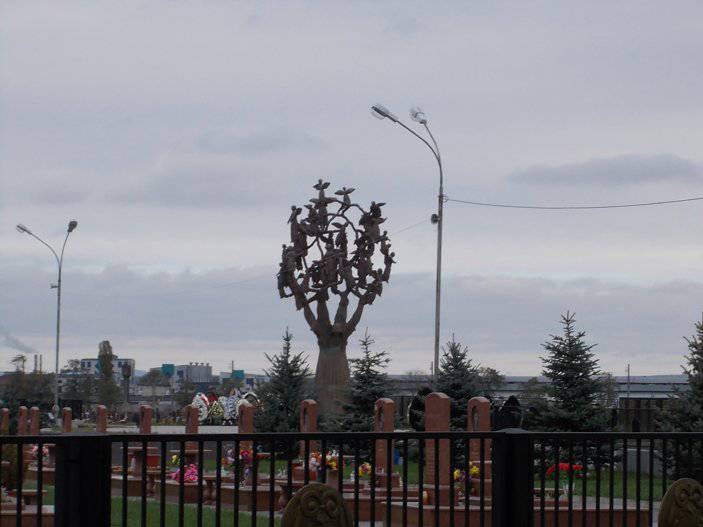 Traveling a distance of nearly 30 kilometers, to the outskirts of Vladikavkaz, costs 500 rubles. And the way I was later explained, I overpaid it. A trip from Vladikavkaz to Tskhinval, and this is 150 km along the mountain serpentine through two border posts - will cost one and a half thousand. In Tskhinval itself, I am not going by taxi - the Ossetians with the Russian name Igor are carrying it, managing not only to overtake the overloaded KAMAZ on turns, which take breath away from the plainsman, but also tell about Ossetia and Ossetians.

It turns out that the Ossetians, like us, have the most revered Holy - this is St. George the Victorious. On the way from Vladikavkaz to Tskhinval, a monument is struck that is made in such a way that it seems to have been carved into the rock. The sculptor managed to fit George the Victorious into the landscape in such a way that at first you didn’t even notice the rider breaking free from the rock. 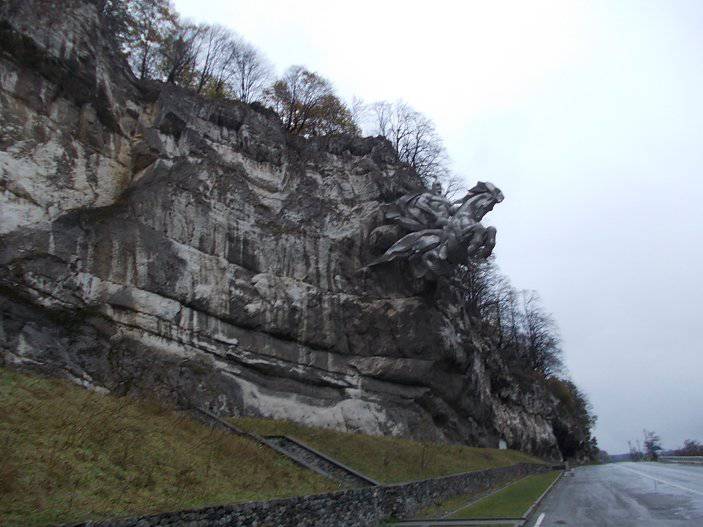 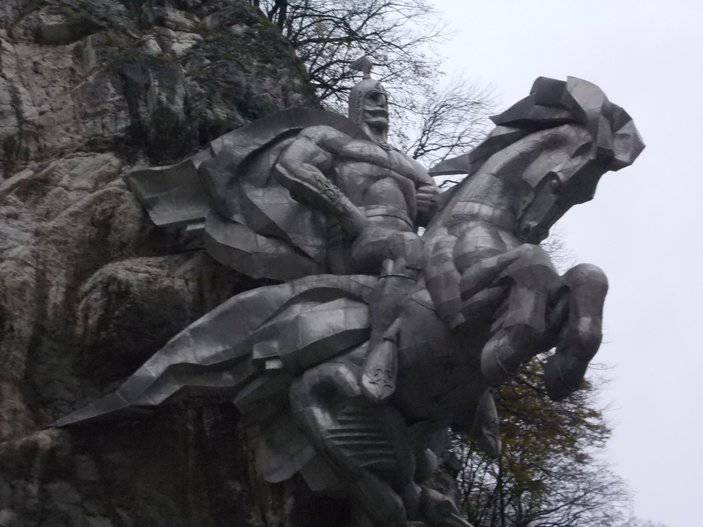 Then it was completely dark, and the road to Tskhinval turned into a continuous smoke break and talk about life. All the fun will begin after I sleep off after a forced march. Therefore, the continuation follows.

Immediately make a reservation: the reporter from me is inferior, because I do not know how to photograph. So do not expect high arts. For myself, I said that I want to understand these issues:

- How is post-war South Ossetia rebuilt?
- Is it possible to unite a divided people?
- Why is the cult of Joseph Stalin in Ossetia?
- Why Ossetians empire?

These are the topics that interest me. If you are interested in something especially - write - I will explore.

Much has been written about the Georgian-Ossetian war and about “peace enforcement”. Therefore, I am more interested in the consequences and how the war remained in the memory of the Ossetian people. And, of course, the way post-war Tskhinval looks like.

I was lucky with the guide. Bakhva Tadeev, the captain of “Alania” in 1995, when the Ossetians became the champions of Russia in football, and today the deputy minister of education, youth and sports takes me to the places of military operations. Tskhinval is in a terrible state. It seems that the war was over yesterday. 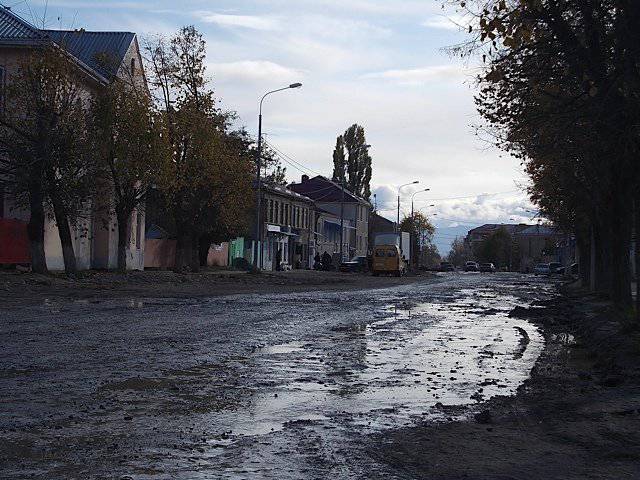 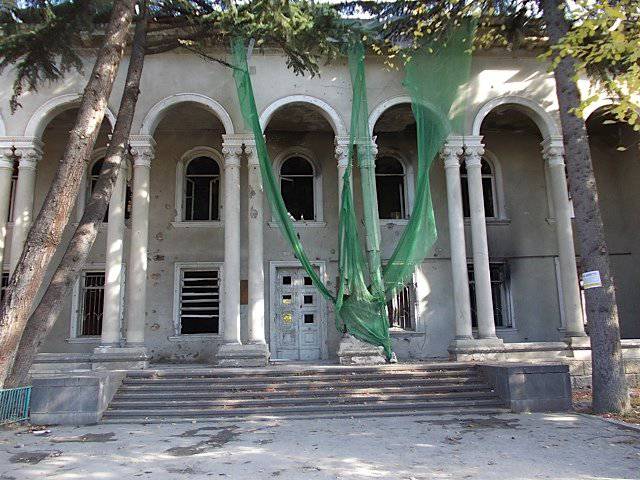 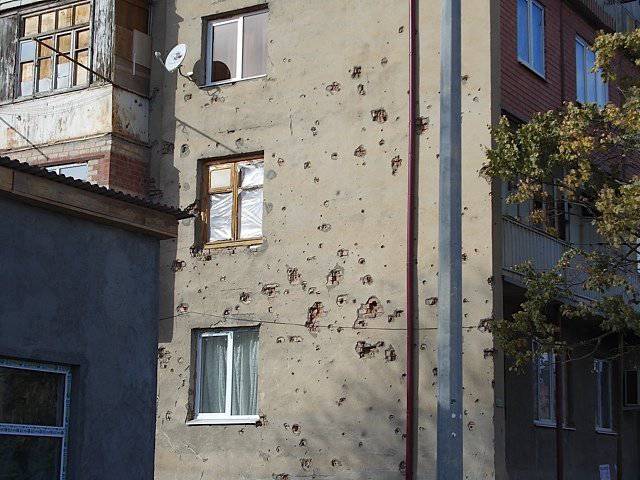 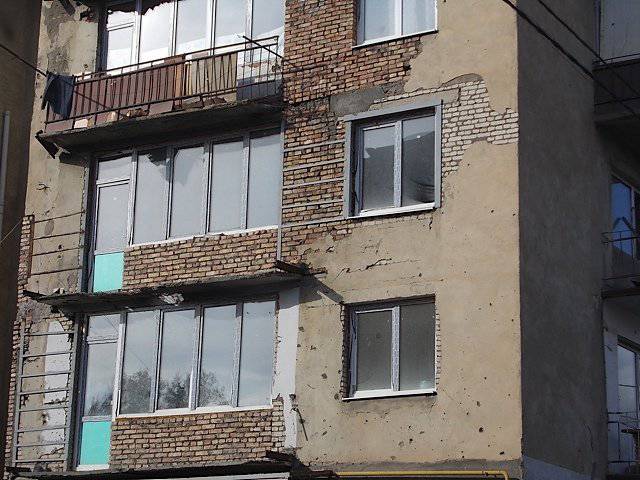 There is almost no asphalt in the city. It turns out that even after the war the city looked much better - the city authorities rummaged everything, ostensibly to replace communications, but no one seems to be going to finish the work. It is difficult to say what is the matter, but the situation in the Republic with financial discipline, to put it mildly, is catastrophic. Of the state budget of Russia allocated 6,8 billion rubles for the restoration of the republic. Today 1,2 billion is financed, but the government cannot account for them. To remedy the situation, the Prime Minister was sent from Chelyabinsk Brovtsev. But even this did not help. The republic restoration committee is practically not controlled by the government, and all funding goes through it. As a result, further tranches are frozen, Tskhinval looks like it was bombed only yesterday - after the rain, other than in rubber boots you will not pass, and the bosses will drive new foreign cars. The situation is painfully reminiscent history with the authorities of Transnistria: literally the other day, the son of the President of Transnistria, Oleg Smirnov, was summoned to the Investigative Committee of the Russian Federation in connection with the theft of a million rubles of Russian humanitarian aid by 180. Against the background of the poverty of ordinary Ossetians, this situation is doubly sad.

The Georgian army entered Tskhinval along the street of Fallen Heroes. This is one of the main streets, which ends at the station square. The only, normally restored house is the house on Vokzalnaya Square, which has become the main line of defense. 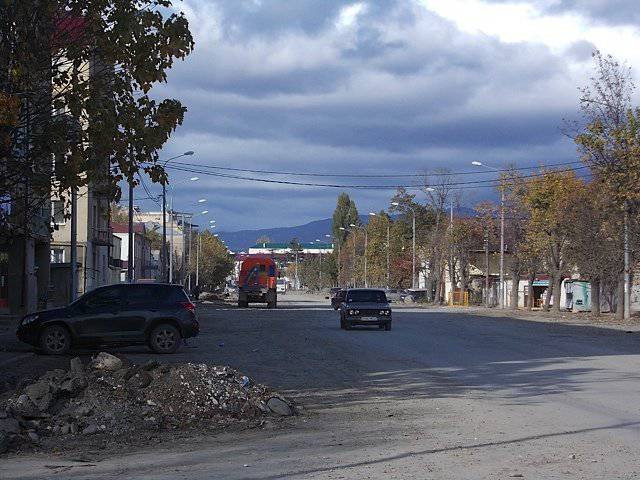 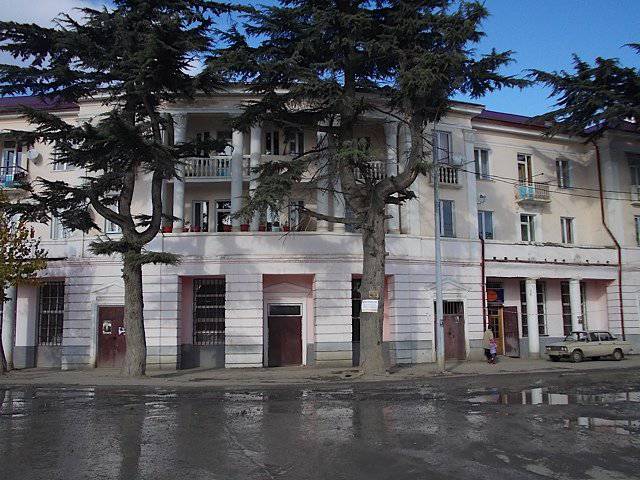 They held back here for three days Tanks the remains of peacekeepers and the Ossetian militia. The defense of this line was commanded by the current head of the republic's Ministry of Emergency Situations, a graduate of the Ryazan Airborne Forces School Anatoly Bibilov and Russian colonel Barankevich, who personally knocked out a Georgian tank.

The tower of one of the Georgian tanks, it seems, will forever remain in Tskhinval. The explosion was of such strength that the tower of the tank went into the sky with a candle and, knocking down the visor of the entrance, plunged into the concrete porch of a residential building. They didn’t clean the tower, but they don’t even monitor the cleanliness - piles of garbage and empty bottles are lying right in the tower. 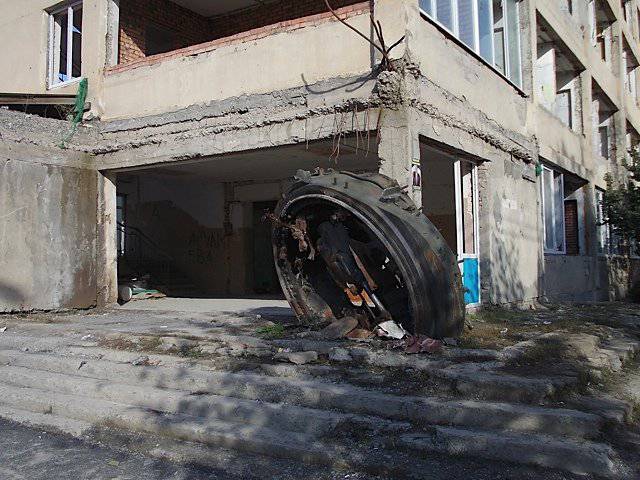 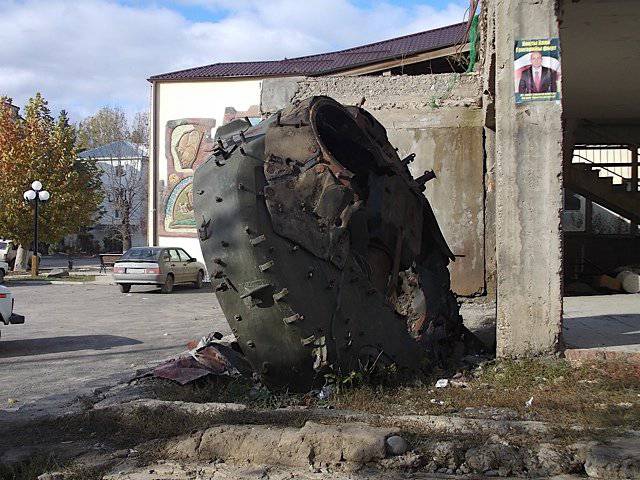 If military actions were taking place in the city, then on the outskirts of Tskhinval there were terrible events that were not very compatible with the concept of war. As soon as the Georgian military forces entered the city, the civilians began to flee the city en masse. We loaded our cars into families and just drove to places where there were no tanks. So, in the direction of the village of Khetagurovo, literally 3 kilometers from Tskhinval, the column of refugees in the car hit the Georgian tanks. I do not want to describe in detail what happened there - I am not a fan of naturalism. The bottom line is that the refugees' cars were simply crushed by tanks. Now on this place is a memorial from the remains of cars and in the middle is a tree of memory. 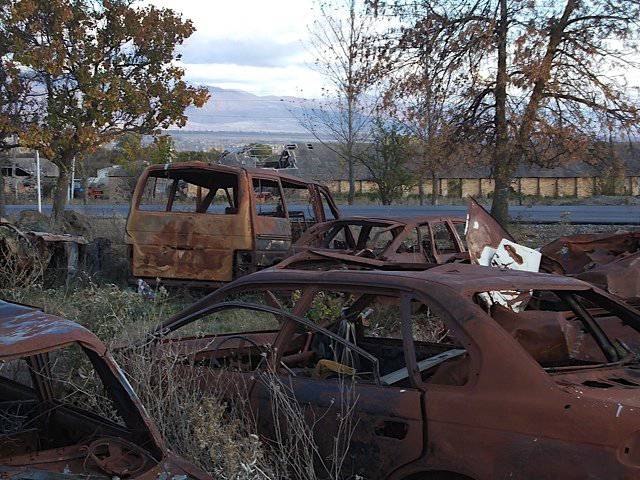 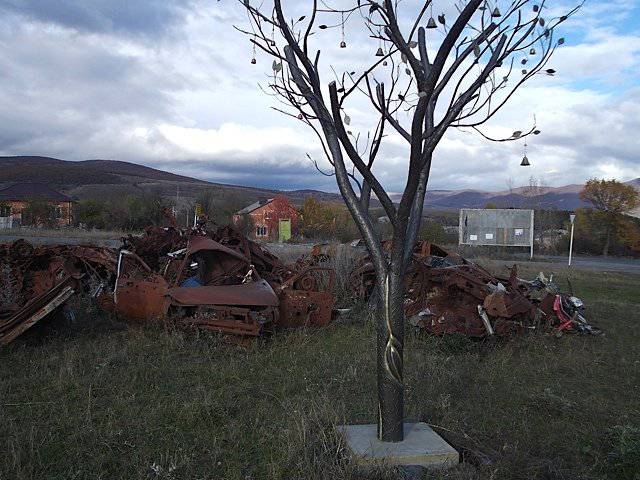 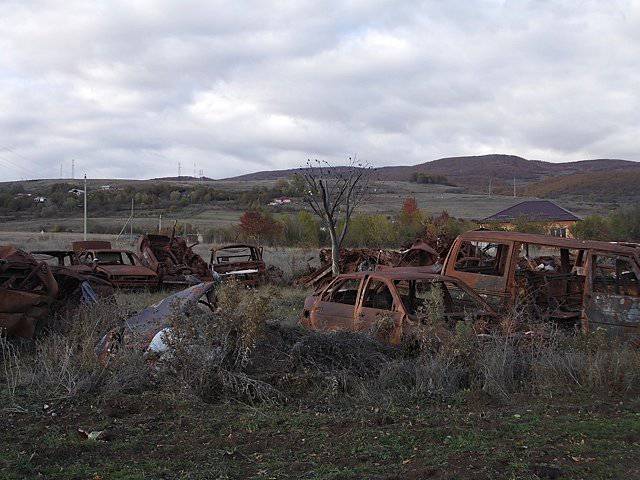 Here, next to Khetagurovo, is the common grave of Ossetian riot policemen, who were the first to meet tanks. Mostly this guys 1985-1988 year of birth. 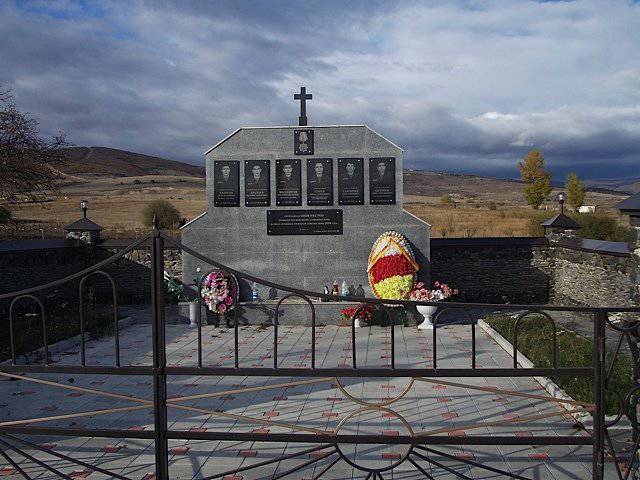 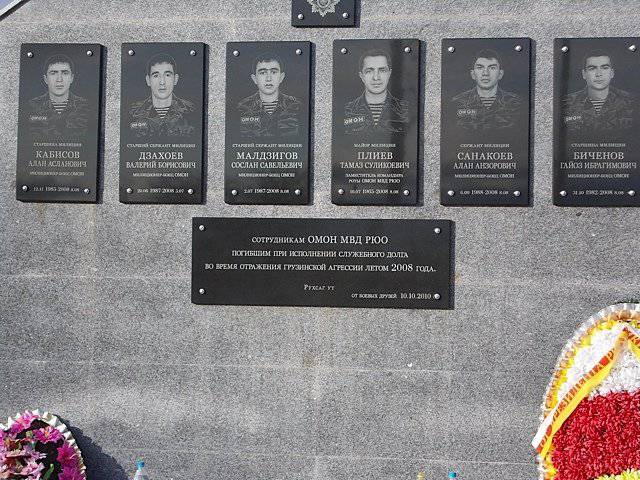 In addition to the traces of fighting, on the outskirts of Tskhinval you can see the ruins of Georgian villages. The fact is that in the period from 1992 to 2008, there were several Georgian villages on the main highway leading from Tskhinval towards North Ossetia. The route has always been a conflict zone, now blocking the road, then conflicts between residents began. When the 2008 war of the year began, Georgian villages became a sort of fifth column. It turned out that Georgian troops entered Tskhinval from the south, and on the northern exit from the city began Georgian villages. In a word, after 2008, there are no Georgian villages around Tskhinval. Houses are destroyed, in some places they were simply leveled with the foundation. It would seem more logical to occupy Georgian villages, placing refugees there. But as they explained to me that there would be no desire to return to the ruins only - if left at home, this could be a slowed down bomb of further conflict. It turns out that it is impossible to demolish these villages and to build something new in their place also fails. Today, these dead villages stand along the road, recalling the war. Which ended 3 a year ago, but looking at Tskhinval it seems that everything was just yesterday. 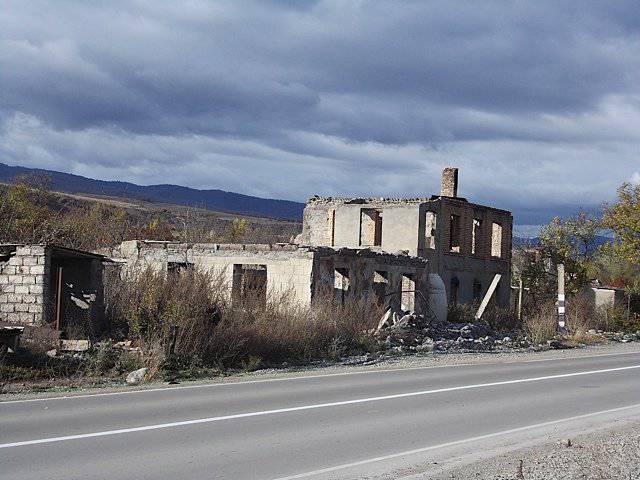 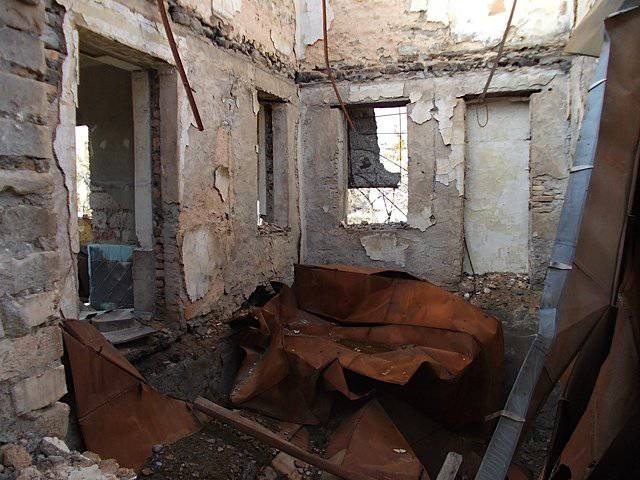 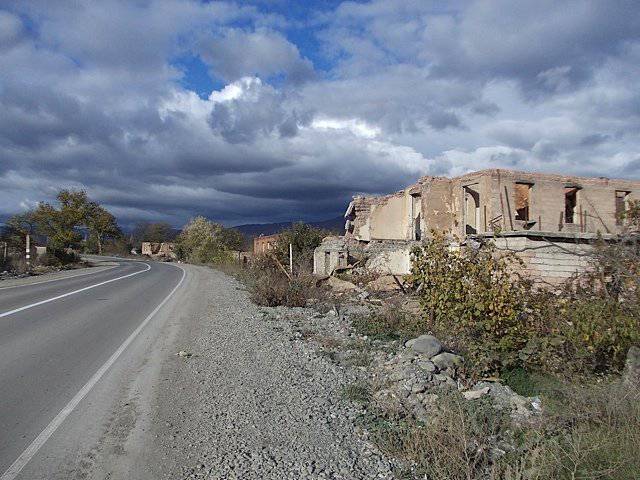