1 September 2015
79
Putin's Russia behaves like an opponent of the United States. NATO forces should focus on deterring the Russian military. One of the main threats to Washington is Moscow. The United States must hinder Russia's actions in terms of "national interests." About all told the US Secretary of Defense Ashton Carter. 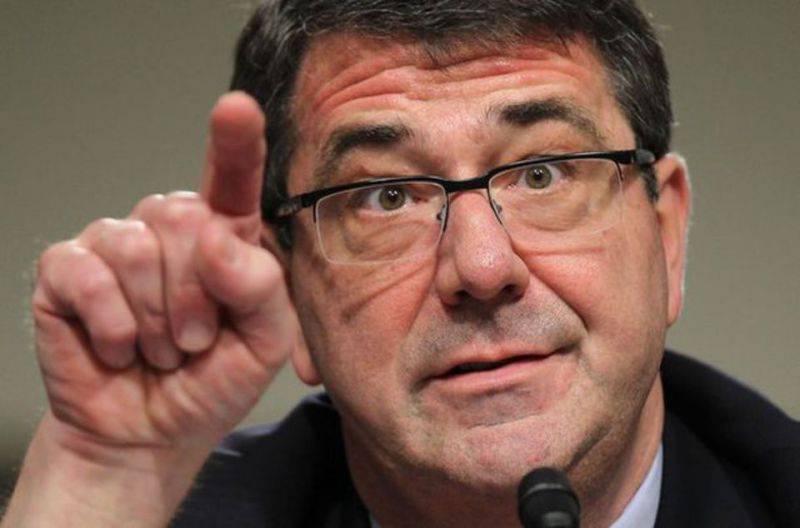 In the USA last year, lists of America’s external enemies came into vogue. We have written about this many times on “VO” and quoted Obama, various generals and admirals from the Pentagon, and therefore we will not repeat. We only recall that almost all these high-ranking Americans called the first enemy either Russia or the “Islamic State”. There was even a kind of dependency: if “IG” was designated as enemy number two, Russia would take the first place; if the Islamists were at the top of the list, Russia was placed at number two.

Speaking to California Marine Corpsmen, the head of the Pentagon voiced his own short list of US foreign enemies.

According to him, the main threats to the United States are the Islamic State and the Russian Federation.

First place Ashton Carter gave the "ugly phenomenon called" IG "with which we must fight and which we will win," notes RIA News".

The second largest threat the minister called the policy of Russia for the last year. Carter is ready to impede Putin’s threatening policy: “We must prevent it from the point of view of our national interests, and because we have important allies and partners in this part of the world, and we have important NATO commitments.”

A separate threat is the actions of the leadership of the Russian Federation in Ukraine. According to Carter, the Kremlin’s policy in Ukraine “leads the Russians in the wrong direction,” because wrong actions increase confrontation with other countries. “These two (threats) are bigger. We must both resist them, ”the chief Pentagonist remarked.

Ashton Carter spoke about the Russian threat not only at a speech in front of the Marine Corps in California. The minister gave an interview to the influential journal Foreign Affairs, where he noted that the Pentagon considers it necessary to focus on "deterring the Russian forces" and to aim at this North Atlantic Alliance.

“We support the aspiration of Ukraine to build its economy. We also help train and equip the Ukrainian army, - quotes Carter TASS. “We provide ongoing assistance in many areas at once.”

The minister noted that Washington and NATO are taking on a “deterrent role”: “In Ukraine, the situation is essentially a clash between the attractiveness of the European economic and political model and Russia's resistance to such developments in the neighboring territory, which it perceives as a threat ... Therefore, we are creating what I called the new rules of the game for NATO in order to once again assume a deterrent role through the strengthening of allies. ”

However, this is not about the war or the weapons of the Ukrainians. According to Carter, Washington and its allies focus on "economic and political measures." And the main ones on sanctions are not Americans at all, but their partners, because “the main lever is not the Americans, but the Europeans, because the volume of their trade with Russia is much more”.

The Pentagon considers it necessary to focus on the "containment of the Russian forces" and aim the North Atlantic alliance at this, Carter summed up.

“I described our approach to Russia as solid and balanced,” said Carter. - It is firm because we are developing opportunities in the military sphere, aimed directly at deterring the Russian forces. We have not done this for 25 years, but we are doing it now. ” “And we are helping non-NATO states, such as Ukraine, counteract Russian influence,” the head of the Pentagon said.

A few days earlier, Carter also spoke of Russia as an enemy.

20 August at a press conference, US Secretary of Defense stressed the concern that Washington is causing an escalation of violence in eastern Ukraine. Referring to the question of the US threat from Russia, Mr. Carter said that "Russia represents an existential threat to the United States simply because of the size of the nuclear arsenal it possesses."

But it was so before. BUT news "That ... for about a quarter of a century now, since the cold war ended, we do not consider Russia to be an adversary." “However, the minister cites "Voice of America"- under Vladimir Putin, Russia in many respects, I would say, in some very important relations, behaves like an adversary. Previously, this was not. "

Afghanistan is over, and now the North Atlantic Alliance has aimed at deterring "at its eastern frontiers": "If in the last decade or so, attention has been focused mainly on Afghanistan, now the alliance is more focused on restraining at its eastern frontiers and at strengthening countries bordering Russia, both members of NATO and other countries, to deter hybrid military operations. ” Speaking of such actions, he cited the example of the "green men" from Russia, operating on Ukrainian territory.

Further, the minister expressed the hope that Putin’s successor, or even Putin himself, would lead Russia into a bright future: “... under Vladimir Putin or one of his successors, the leadership will lead Russia ... not along the path of confrontation with the rest of the world and self-isolation they are moving now, but on the path of closer economic and political integration with the rest of the world. ”

It is not difficult to imagine, let us add, what Ashton sees this “integration” of Russia with the “rest of the world”.

First, a “successor” sits on the Kremlin throne, ready to dance to the tune of Washington.

Secondly, Russia does not encroach on any role in the world, except the role of a raw materials appendage of the West. Remaining as an appendage, it will “restrain” itself.

Fourth, Moscow is returning the Crimea and apologizes to Poroshenko for the temporary use of the peninsula. Ideally, it would be nice to pay Square and cash compensation. And maybe even some territories to throw. And to give the Germans Kaliningrad and the region so that they could feel the good Russian will. “Russia is a generous soul!” Have you heard? So, this introduction foreigners love very much.

Fifth, Putin’s successor reviews the causes and results of the short 2008 war, returns the “occupied territories” and endorses Georgia’s entry into NATO.

Sixth, applause: Poroshenko and Carter receive the Nobel Peace Prize in half.

Seventh, the name of Putin’s successor: Garry Kasparov. And Mikhail Khodorkovsky will become Prime Minister with him.

This is where full integration will come.

Rosneft is solemnly renamed Yukos, while the tireless Interpol is chasing after Sechin in London and Zurich. Berezovsky is suddenly resurrected in New Zealand ...

Americans even moved Russia in the list of enemies somewhere in third, and even fourth place. Count almost friends. This will be a real geopolitical achievement of the new president of Russia. Not that some kind of annexation of the Crimea!

We are in Yandex Zen
United States Marine Combined Training Center and Gender Neutral Positions
This is not “Putin’s Russia” - this is “Putin-Russia”
79 comments
Information
Dear reader, to leave comments on the publication, you must to register.