Crimea through the eyes of an inquisitive tourist

August 31 2015
125
One of my acquaintances, a man rather young and active, chose a place of his vacation for a long time. The fact is that this vacationer was not used to sit still. Classic vacation on the sandy “rookery” denies since childhood. In addition, it can not just look, but also to see. Not just listen, but hear. In general, to throw the idea of ​​traveling to the Crimea was easy. As soon as I learned about his decision to rest in the Crimea, I immediately offered to become my “misguided Cossack”. Just express your opinion about what and how is there now.


So please do not take the article as a deep analysis of the situation. These are just sketches of a Russian tourist from the Russian Crimea. So to speak, from the first person. 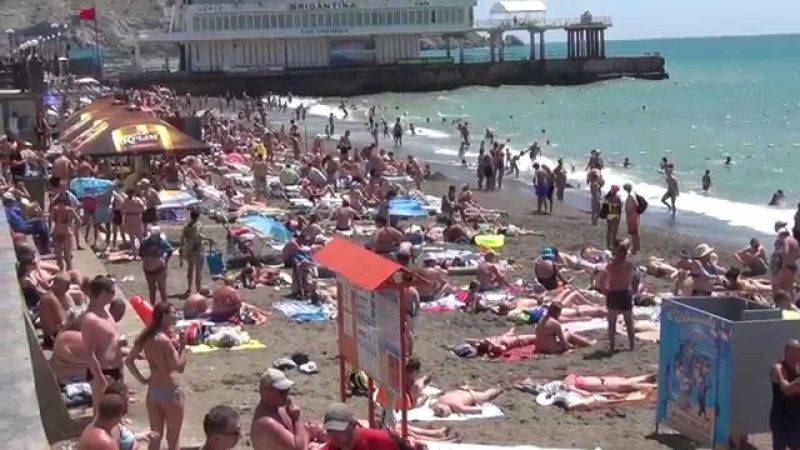 The decision to rest in the Crimea was not easy. Not because the peninsula is advertised on all pillars (but there’s an “iron argument” about belief in advertising: they do not advertise black caviar). Just too depressing impression left such a holiday a few years ago, even in the Ukrainian Crimea.

But having listened to the "iron arguments" of my friends (half, I note, in the Crimea, I have never been at all), I decided to try again. At one's own risk.

The path through the crossing was dismissed immediately. This is for those who have a lot of time and iron patience. I am not one of those, because the plane.

The first thing that struck was the number of aircraft in the Simferopol airport. As if from Moscow and did not fly. Constantly something lands or takes off. I asked the girl at check-in about the number of flights. For a hundred a day it turns out. Impressive.

The second "defeat" was inflicted by the Ukrainians. The real, classic "hohly" and "hohlushki", which fun lopatali Ukrainian still at the Moscow airport. And then also on the plane. Percent 20-25 passengers were citizens of Ukraine! Magical impression.

Here it is necessary to deviate from the story. According to the Ukrainian Border Guard, more than 100 thousands of Ukrainians arrived in Crimea this year. Total. But there is a small inaccuracy here.

The fact is that the Ukrainian border guard service takes into account only those who cross the border of Ukraine with the Crimea. Those who cross the border with Russia go on a different list. That's why they are not taken into account. After the cancellation of the railway communication, Ukrainians get to the peninsula by buses. The procedure, to put it mildly, is not easy and requires some financial costs. So those who have extra hryvnia prefer to travel through Moscow, St. Petersburg or Rostov. In short, through Russia.

Therefore, we cannot say what the actual number of Ukrainian citizens who came to Crimea this summer. One thing is clear - many times more than miserable 100 thousands.

Simferopol did not hit. An ordinary city. Large and not very interesting. Prices in stores and markets in Moscow. And the range too. I did not see the great “heaps” of local fruit. By the way, a young couple from Kiev, with whom we hung around the city, expressed much more emotion on this matter. According to them, such goods at such prices in Kiev you will not find ... A gang of robbers, not sellers. In Kiev, everything is two times cheaper. And Kiev is not cheap by Ukrainian standards. I don’t know if it’s true, but the guys didn’t make impressions of the Svidomo ...

An attempt to find a place in a more or less decent pension or sanatorium ended in complete failure. You what? We have everything up to October. The place can appear only if someone refuses the reservation. And so, sorry.

By the way, the couple decided the problem without any special “straining”. Do you want it? Pay such money for the room in this box? Let's go. We are here at one hostess we rent a room. Inexpensive and quite acceptable. And the room is only needed to spend the night ...

Did not want the Soviet unobtrusive service. Rest - so rest. And we rarely find “convenience in the yard” even at summer cottages.

In short, I found a car rental office and soon became an “autotourist” who moved along the coast of Crimea.

The car gives a feeling of freedom. And the opportunity to talk to people. Crimeans generally love to talk for a living.

I drove almost the entire coast. I looked. He talked. Findings?

The holiday season in Crimea passes ambiguously. To say that he failed, I would not. In all major cities, the picture with places in sanatoriums is about the same. They simply do not. But a little aside, where the "wild" vacationers have always rested, peace and quiet. There are almost no people. And if there is, it is most often Ukrainians. The Russian tourist has lost the habit of "wildness." Does not want to live in "klopovniki" and "nesting boxes." Yes, and used to eat already in normal cafes and restaurants, and not in the "pie".

By the way, it was interesting to look at the Crimean military grouping. Judging by our media and the Ukrainian media in particular, the military should be the sea. And all sorts of police, too. Still, the Crimea is, in the opinion of Ukraine, a disputed territory. So, the paradox. I did not see the military there. Throughout the way, no "polite person." Sailors have. But which port they are not? And the rest did not see. Probably located away from the coast.

The same picture with the police. Even a traffic cop saw three or four times in all the time. No police! Or not visible. And the order, according to local Aborigines, has become more.

Communicated with the Crimean Tatars. Not specifically, but it happened. Cafe for them - it is something! Not that you will lick fingers, the main thing is not to accidentally eat a fork. After eating, he began to ask, naturally. Many have left? No, not many. Most of the members of the Islamic organization. The name did not remember. They also said that it is prohibited in Russia, but allowed in Ukraine. That left away from sin. But only one. The rest live. And all these political "quirks" to them deeply on the drum. Also, attention, like religious issues. Most Muslims are the same as Russians are Orthodox. More tradition and respect for the faith of elders than real faith.

Another struck indifference of local authorities to tourists. No, everyone understands that tourists are money. And they talk with pleasure about the desire to have these same tourists in their villages. Only here the coast is removed from the trash. Organize a decent service too.

Due to the large number of contacts, I developed a kind of rating of “satisfaction” of the Crimeans with the state of affairs. Again, no claims on 100 percent hit by statistics. Pure opinion of one person.

Really happy state employees. Especially the military, security forces and those who receive a "state" salary. For them, the return to Russia was just a gift of God. They felt like people. Needed by the country, needed by all. And now not the poor.

Oddly enough, happy and retired. Especially when you consider that most of the military. Pensions are not comparable in Russia and Ukraine.

Happy and businessmen. Order has become more. "Wild West" less. Problems, however, increased. Ukraine, through its laws, has “wound up” many connections. It is necessary to "spin". Search for new suppliers, establish new contacts. By the way, Ukrainian goods in the markets and in stores became two times less than before. But there appeared a lot of Kuban, Rostov and generally Russian goods. So the locals say.

The only "unfortunate" Crimea - those who lived and trying to continue to live at the expense of "wild" tourism. Owners of the very "klopovnikov" on the coast. Small traders who did business at the expense of "savages." Here for them really came the "black" times. Spoiled Russians do not want to spend money on such an unassuming vacation. And the calculation of the large influx of tourists was not justified. There was an influx. And not because people do not want to go to the Crimea. Just because there is no opportunity to go. The ferry and airport operate at the limit. And this limit has already been clearly reached.

One feels how the Crimea "chokes" from the absence of a bridge. Or a tunnel. At least something that would provide normal transport links to the mainland. The problem needs to be solved. And solve as quickly as possible.

Well, and "ukroservice" too. We have become accustomed, if not to Turkish “all inclusive,” then at least to the level of the Krasnodar Territory. No, such a nostalgic visit to “the good old Soviet times” is, of course, amusing. But not in terms of good rest.

But in general I liked it. Positive such feelings. But next year I will not go there. It’s too early to talk about the new tourist "Mecca" of Russia. Too much is still "Ukrainian" in the work of the authorities, and in relation to tourists, and in creating conditions for recreation. The only thing that instantly "Russified" is prices. Only with all the breadth of the Russian soul, I do not type money, but earn. And not a goon. I can spend this money on vacation. Only now it is desirable that the owners of the "hotels" on the coast learn the same truth. Money needs to be earned. And do not collect it is not clear why.

Apparently, I will wait for five or six years. And try again. Then it will be possible to judge more objectively.

Here is a story about a Russian tourist Russian Crimea. The story may be subjective, controversial, but it is. And the opinion of one person, one small part of a multimillion-dollar army of tourists, should be taken into account when preparing for the next season. Crimea should become a truly favorite vacation spot for many Russians. Should from the subsidized "outcast" turn into a prosperous land. How did this happen, for example, in Sochi.

Ctrl Enter
Noticed oshЫbku Highlight text and press. Ctrl + Enter
We are
About Stalin and KhrushchevWhat you didn't want to know about England
125 comments
Information
Dear reader, to leave comments on the publication, you must to register.