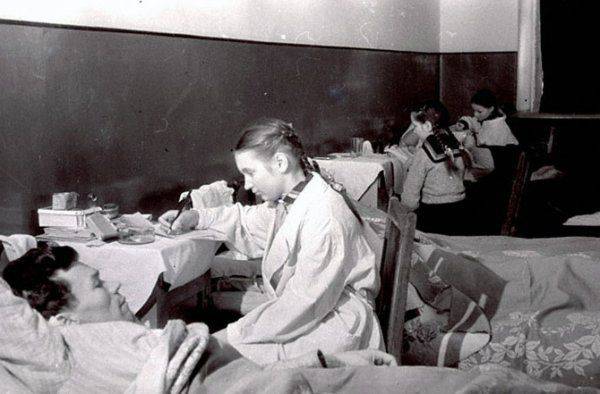 On the eve of September 1, parents of today's first graders have a hard time. They complain about the bustle of shopping, but some try to "shove" their beloved children to the right teacher. What happened in the 1942-1943 school year? How did the children live then? What they were doing? And it seems to me that many of our problems are a trifle and a husk in comparison with the military childhood.

Tamara Petrovna Gorevaya (during the war - a schoolgirl from the Khosta village secondary school) recalled: “After school, I regularly ran to the hospital. I read letters from home and wrote answers to the blind. I fed wounded people who did not have arms and seriously ill patients from a spoon. I pulled out rags thread and made tampons instead of cotton wool. "

I.V. Shirokov, who had studied in the war years in high school in the village of Khost, recalled: "At school we staged a performance and then performed in hospitals. Once I had to play the role of Hitler, because no one wanted to perform it, but I was obliged to be the head of the class. I put on an English jacket left after the Civil War, drew fascist attributes, made a mustache with soot, respectively, combed his hair and tucked the biggest cook knife by his belt. My classmate portrayed Russia. We played the fight scene with her. Of course, Russia won We composed this performance ourselves. We also staged performances based on the works of A.P. Chekhov “The Malefactor” and “Surgery.” The wounded really liked our productions. ”

The most actively carried out patronage work with local hospitals, pupils of school No. XXUMX of the city of Sochi. They initiated the celebration of the New Year in them. Pupils prepared in advance for this holiday. They bought small gifts for soldiers (nuts, prunes, tangerines, apples, paper, envelopes, pencils). Sewed pouches, handkerchiefs. Prepared greetings. The guys bought small Christmas trees and collected Christmas decorations. December 8 was divided into two groups: the youngest (31-1 classes) and the senior (7-8 classes) - and under the guidance of class leaders and pioneers, they decorated the Christmas trees in the wards.

The largest Christmas tree was installed by high school students in the dining room. And on January 1 1943, schoolchildren performed before the wounded with New Year's greetings, a concert of amateur performances, and distributed gifts. "With tears of joy, the fighters and commanders were greeted by such children's care for them," the archival school documents say.

The wounded of this hospital wrote a letter to the editors of the city’s Sochi newspaper with words of thanks to their young chiefs, which, in particular, said: “Each of us has a warmer heart at the thought that after studying children prepared funny songs, poems, stories for us about the military affairs of the front-line soldiers. Children’s gifts are very touching, but dear to each of us. Young patriots can show love to the defenders of the Motherland even in small things. "

Schoolchildren were welcome guests in any ward, the wounded warmly spoke of their little chefs, who brought revival to a strict hospital life, they were looked forward to, they were remembered, even after they left the hospital.

Meetings with children have become a form of psychological rehabilitation for people crippled by war. The wounded had positive images associated with the house, family, and own children, with whom communication could have been lost. Emotions received smoothed the severity of pain from wounds, dulled the severity of personal experiences, had a stimulating effect, there was a desire to return to the system, including for the sake of the peaceful life of children, both their own and those with whom they brought the soldiers' trails.

In her report on the 1943-1944 school year, the head of the public education department of the Stalin district of the city of Taganrog stated: "When the hospitals opened, the students collected (in the courtyards) dishes, bedding, pillows, beds, etc.. The children prepared wounded wards for the arrival, they tried to give them a cozy look — they carried portraits, slogans, flowers. Constantly visiting the wounded, they willingly carried out their requests: to read, to go to the bazaar. In the spring, they were in a hurry to grow onions and radishes in order to carry them to the soldiers. "

A resident of the village Hosta M.V. Ivanova, in her memoirs, emphasized that “teenagers were on duty at night at the bedside of seriously ill patients. On stretchers from the hospital they helped medical personnel to carry the wounded to the shores of the Black Sea, there they untied bandages, bathed them in healing sea water, washed bandages and again, on steep slopes, lifted them in the fingers were numb, tired shoulders and hands of half-starved teenagers from an unbearable burden, but they courageously assisted the defenders of the Motherland. "

What led the children, what made and motivated them to give their last strength, free time, given that they themselves were starving and needed help? Let us again turn to the story of the wartime I.V. Shirokov, in which the perception by the bulk of the rising generation of the country of their role in helping the front can be traced. “In his spare time,” he notes, “the adolescents visited the wounded with great enthusiasm, the schoolgirl girls helped the nurses to do the dressings, read the newspapers. And we collected moss in the boxwood grove for hospitals, as there were not enough cotton wool and bandages, and 100 grams of moss 400 absorbed grams of pus, and no other substance in the world possesses such properties. They collected the fruits of wild pears and apples, dried them for the wounded and for sending them to the front. Everything for Victory "has become our way of life."

It is indisputable that patronage of hospitals by schoolchildren was an organized process within the framework of the public-state movement of assistance to the front, which was under special control of party and Soviet organs of all levels. And, perhaps, a large percentage of adolescents perceived their participation in it as a pioneer or Komsomol task. The administration of education authorities, especially in such cities as Sochi, Kislovodsk, Yessentuki, which became the leading bases for the placement of hospitals in southern Russia during the war years, declared patronage of them one of the priority areas of out-of-class and extra-curricular work.

At the same time, behind the ideological and formal shell of the patronage movement, there is also an emotional-psychological layer. Nearly every schoolchildren, some of the close ones fought at the front and risked their lives. The children of the war noted that “if it was bad, they remembered their fathers:“ We are warm, and how is he there? ”In this connection, helping the wounded, communicating with them was one of the main emotional threads that connected the rear with the front, and on a subconscious level - children with loved ones. After all, the children lacked parental warmth, the wounded, who had many unspent fatherly feelings, to some extent filled the young souls with those necessary emotions characteristic of parent-child relationships.

Employees of the Department of National Education of the Stavropol Territory in 1944 noted that "direct communication and friendship with front-line soldiers exerts a very good influence on students, disciplines them, and teaches them to be more thoughtful about their studies and their duties."

Ctrl Enter
Noticed oshЫbku Highlight text and press. Ctrl + Enter
We are
Taganrog underground. Anti-Hitler resistance did not stop the whole occupationMy grandfather's front-line letters (part 2)
13 comments
Information
Dear reader, to leave comments on the publication, you must to register.