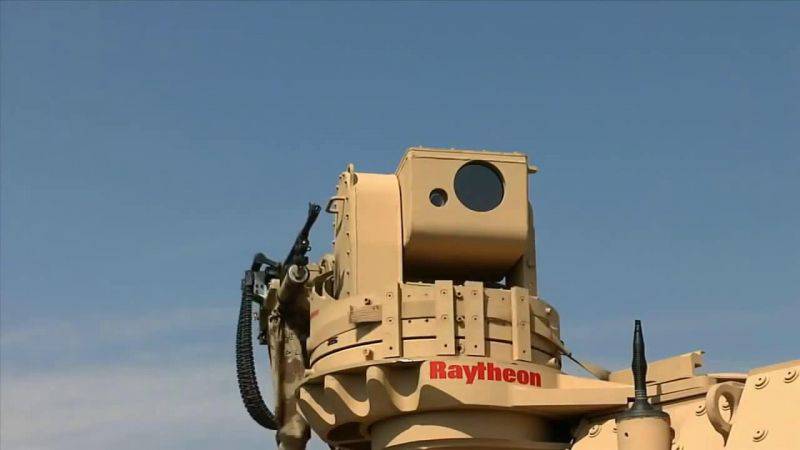 The modular Battleguard touch unit connects to an infrared front-view system, resulting in a complete system with optional integration of weapon systems


Operations in Afghanistan and Iraq have revealed many problems with light armored vehicles. Crews had to regularly act independently on open terrain or in urban conditions, while they had to be able to inflict damage on almost any type of enemy, from fighters hiding behind trees or buildings to opponents protected by fortifications or armor. This variety of operational conditions today requires an increased level of situational awareness, better protection of personnel and high mortality using various weapons. As a result, infantry fighting vehicles and armored personnel carriers, in order to increase their mortality and survivability, are increasingly equipped with new and more powerful weapons systems and sensor systems that allow them to carry out operations without the support of the main combat tanks.

In particular, they need optical-electronic and infrared (OE / IR) systems, which would allow quickly and effectively carry out the search, tracking and identification of enemy targets. At the same time, precise fire control is necessary for its armament and a high level of near situational awareness. These elements are perfectly integrated into a customizable and easily upgraded compact system that can be easily installed on any machine.

However, most of the crews of existing armored combat vehicles (BBM) still monitor and target the target through periscopes, using technological principles that have been in 600 for years. Periscope “windows” protruding above the armor were reduced in size and over time received excellent protection, but this is a double-edged sword, as this, in fact, limits their flexibility.

However, the periscopes were equipped with thermal imagers and received laser range finders, image stabilization and fire control system (SLA), which made it possible to increase the accuracy of the fire and fire in motion in almost any conditions.

Despite the simplicity of the concept, vehicle periscopes remain complex systems with many mechanical and optical parts. Their installation requires drilling large-diameter holes in the armor, they take the vital space in the claustrophobic case, and the modernization is limited to the architecture, volume and parameters of their optical parts.

The appearance of the OE / IR systems on the towers, which are already widely used on military aircraft and ships, promises to change the quality of the review conducted from the inside of armored vehicles. This approach, called the “armor system”, consists of installing compact turrets or stations that provide digital perception instead of direct optical observation.

These systems, as a rule, are completely stabilized, are connected to the displays and controls of the crew inside the machine by means of a fiber-optic cable and not a bulky optical chain. Refusal from periscopes not only frees the developer from the limitations of the hull structure and internal ergonomics, but also allows you to freely place external systems that can optimize the viewing sector and expand the functionality of sensors and transmitters, removing previously existing obstacles to building an integrated vision system.

These stations are modular and can be configured with almost any type of sensor or laser systems available on the market, including missile guidance systems, such as a radio or laser beam. The process of modernization and maintenance of these systems is, in general, more comprehensible and less complicated, since modularity and a higher level of standardization of the seats simplify the integration of sensors of different sizes, while the maintenance is carried out with less intervention in the fixed structure of the machine body.

The electronics and processors are completely enclosed in an optical-electronic sensor unit, which saves space in the machine body. In most cases, the digital output of sensors required for the use of fiber optics also simplifies integration with other sensors, weapons systems and SLA, as well as the transfer of images and video. A large degree of freedom in placing the sensors makes it possible to increase their capabilities in detecting and tracking several targets and to obtain search and impact capabilities by working together with the gunner’s sight or the second viewing station.

An important aspect of the electronic nature of sensors in these systems is the ability to use electronic signal processing to improve image quality and implement functions such as automatic target detection and tracking of several targets, as well as other processing methods that will become available in the future.

Some of the systems placed above the armor are able to track targets and simultaneously scan around the car (a full panoramic view in near real time), which increases the level of situational awareness.

Of course, not everything is so smooth, there are several flaws in the systems introduced. For example, a higher silhouette compared with the periscope makes them an attractive target for enemy fire. Today, the highest level of protection of remote systems corresponds to the STANAG 4569 2 level, which does not protect against weapons caliber over 7,62-mm. Of course, users can install multiple stations to increase redundancy, or add armor to the tower, but this leads to an increase in mass and may impair the mobility of the system.

Car crews can also see a problem in the absence of an optical day channel. They say that the optical channel is definitely preferable to a digital camera, as it generally offers a higher resolution and more direct human-machine interface than displays.

Remote systems are currently only beginning to emerge on the market, but their list will definitely expand significantly soon.

The newest position on this list is the L-3 Wescam MX-GCS, presented at IDEX 2015. The two-axis stabilized sighting system is designed for medium- and large-caliber weapons mounted on machines from 20 mm to 120 mm. The basic set of devices includes a high-resolution daytime camera, a cooled mid-wave thermal imager and an eye-safe laser range finder. 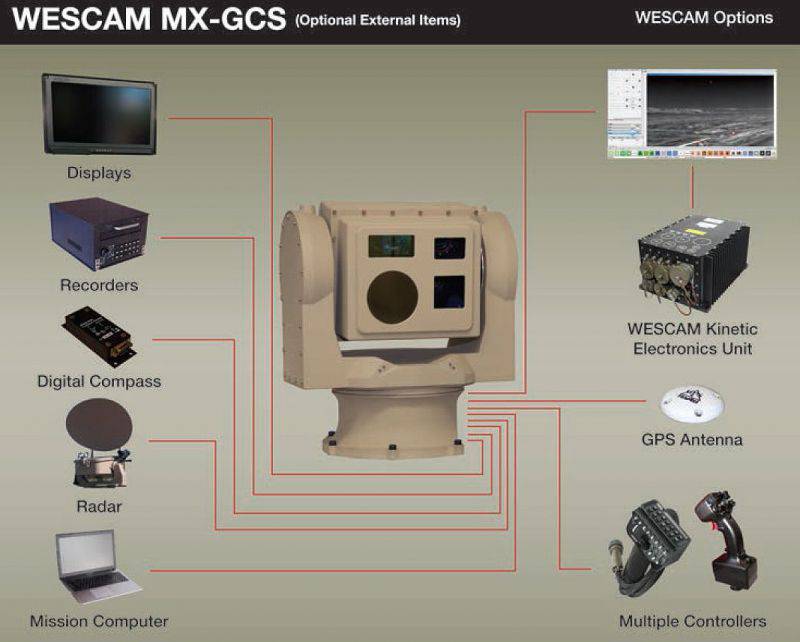 Optional devices include a long-range optical pointer, a laser illuminator / pointer, a cooled / uncooled thermal imager, a laser designator and a short-wave imager.

The station has a double configuration for the shooter and the commander, which allows you to use the search and strike mode or conduct firing of weapons independently of each other. As stated in the company L-3 Wescam, the latter function is unique, it increases the combat survivability in case of damage or failure of the main aiming system. The MX-GCS system is still being finalized, but it has already been tested with 30-mm and 105-mm guns.

The universal advanced panoramic sight Paseo from Sagem Defense Securite enhances the survivability and combat capabilities of the BMP and MBT by reducing the target detection time, increasing situational awareness and fire efficiency. The basic configuration includes a mid-wave imager with continuous zoom, a high-resolution daytime color camera, and a laser rangefinder safe for the eyes.

In order to expand the range of tasks performed, Sagem offers a number of options, including a cooled long-wave imager, a ballistic computer, a direction control system, panoramic tracking in scan mode, automatic tracking, and a laser pointer or a laser beam emitter. These options transform the Paseo from an observation observation station into an actual fire guidance and control system, which can be installed on any machine armed with a cannon and / or rockets. The system, which is divided between the commander and the shooter, was shown on the Cockerill 3000 tower at IDEX 2015.

From the very beginning, the aimed stabilized optoelectronic system SEOSS (Stabilized Electro-Optical Sighting System) from the Rheinmetall company was created as a compact, stabilized, digital fire control system for BBM and MBT. It consists of a third-generation 640x512 thermal imager (at the customer’s option, working either in the mid-IR region of the spectrum or in the long-wave IR region of the spectrum), daytime CCD camera, laser range finder, inertial sensor and tracking video device. Rheinmetall claims that SEOSS is already installed on the Piranha IIIC of the Spanish Marine Corps and can be installed and integrated into all types of combat vehicles. The system continues to be offered as part of the MBT Revolution modular upgrade kit. 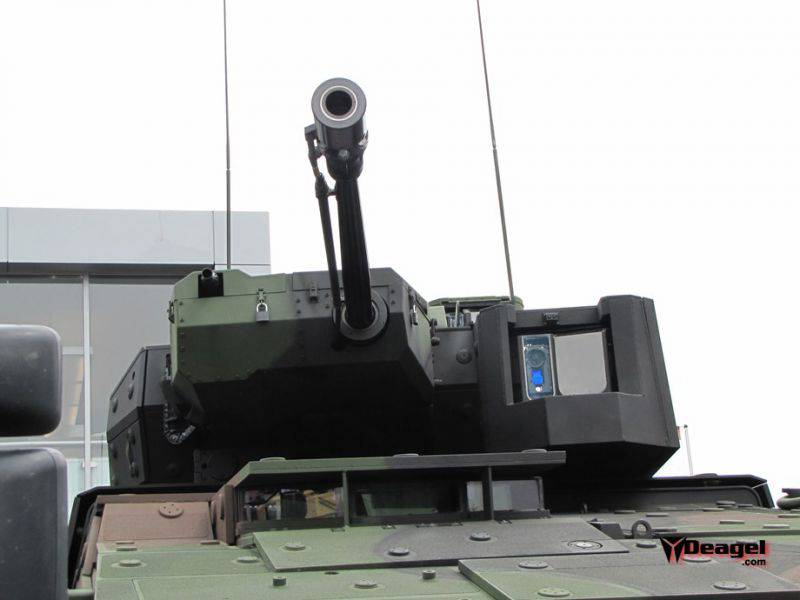 The system is available in two versions: SEOSS Panoramic, which operates as an independent commander fire monitoring and control system with angles in azimuth 360 ° and a viewing sector in elevation from -15 ° to + 17 °, and SEOSS Sector - an arrow system with a viewing sector ± 7,5 ° on each side of the aiming line.

The day / night commander target targeting and surveillance system COAPS (Commander's Open Architecture Panoramic Sight) from the Israeli company Elbit Systems is a two-axis stabilized sight with additional fire control functions for fixed and mobile platforms. It is synchronized with the main sight of the shooter, which allows you to work in search and impact mode. The structure of the COAPS includes a thermal imager (medium and long wavelengths are offered with a resolution of 640x512 pixels) with continuous zoom, a daytime color CCD camera and a laser rangefinder safe for eyes. 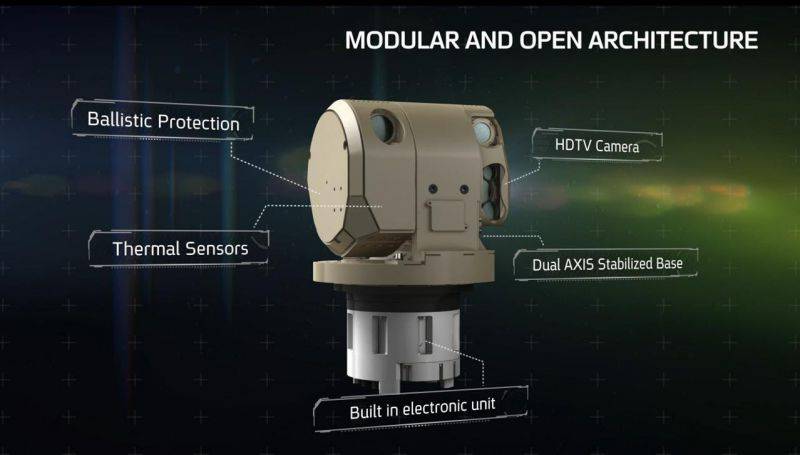 Raytheon’s independent BattleGuard modular system not only has the full functionality of the commander’s sight, but can also accept various lethal and non-lethal weapons.

It ensures early detection of threats and increases crew protection and machine survivability due to the full-length review on the 360 ° battlefield by a second-generation cooled long-wave thermal imager and a daytime color camera with a built-in rangefinder. The system is capable of accompanying several targets simultaneously, aiming guns and missiles at targets, and can also operate in automatic targeting mode and hitting targets using external target designation commands from onboard and remote sensors.

Battleguard was installed and demonstrated on the Bradley M2 / M3 BMP, the system design allows it to be installed on a wide range of combat vehicles, ranging from MBT to BMP and BTR.

The current list of rendered systems ends with the newest system Janus RSTA (Reconnaissance, Surveillance and Target Acquisition) from Selex ES. The passive thermal imaging system with panoramic capabilities, designed for round-the-clock work, complements or replaces the commander's sight on the BBM. 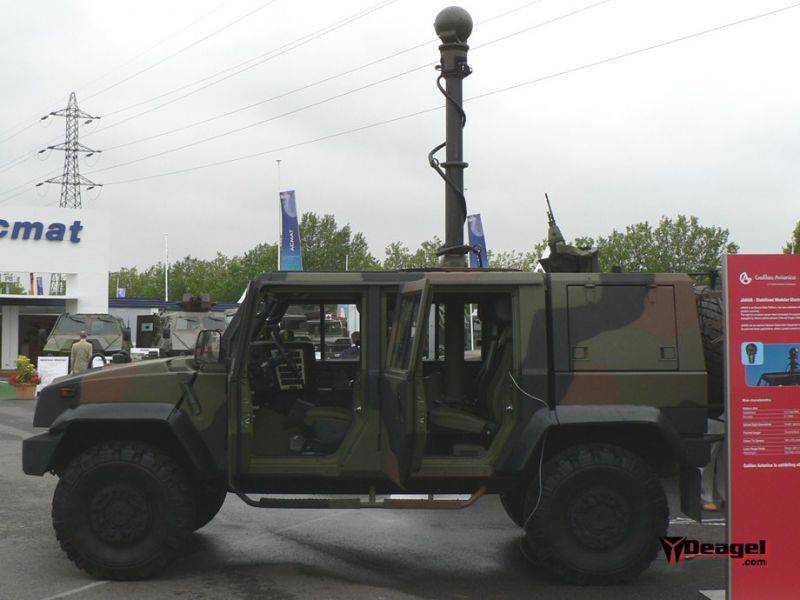 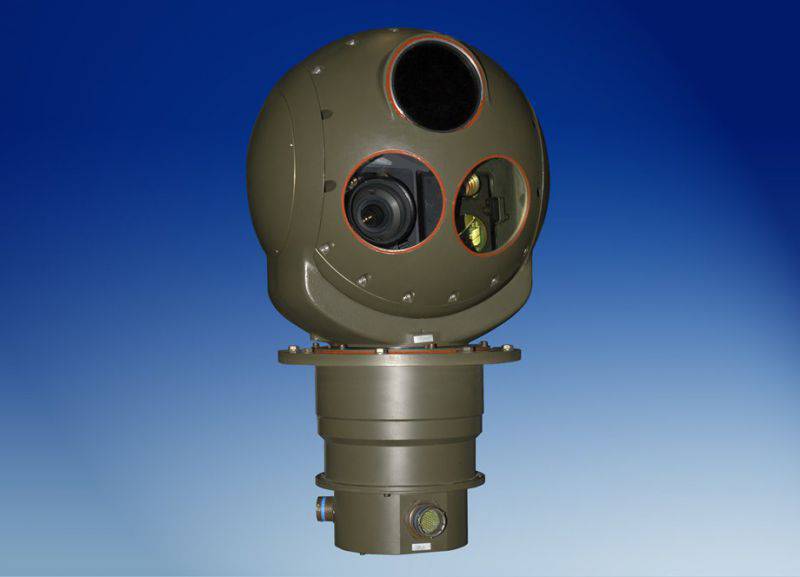 Janus consists of a third-generation thermal imager with a full-format video converter matrix, a Superhad color CCD camera with continuous zoom and a laser rangefinder. Above Janus station on LMV car

Janus is a panoramic sensor unit consisting of a mid-wave thermal imager with a matrix of 640x512 pixels and a CCD camera with continuous zoom with an optional rangefinder. The system has a tracking device, and it can synchronize with the main gun when working in search and impact mode.

The Janus system was selected for installation on the Italian multi-purpose BBM Freccia. 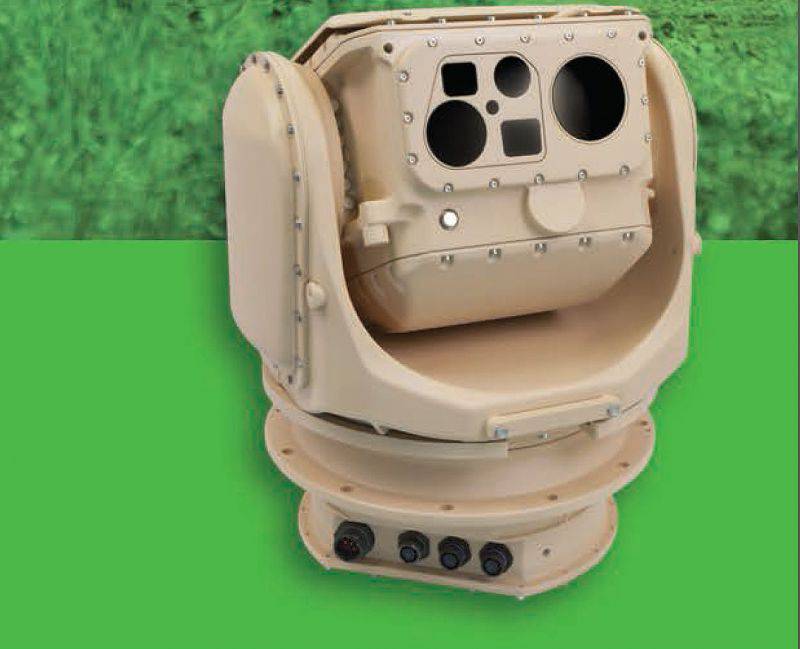 Sagem Paseo is available in land and sea.

Based on the defense spending forecast, it is expected that the global market for search-tracking systems and fire control systems for ground vehicles will reach 42 billions of dollars in the 2015 year and up to 2024 will increase by 0,9% per year. 16,8 billion dollars (40%) of this multi-billion dollar market in the future may be taken out of the system.

The removed systems will initially find application in the BMP segment (the volume of which is of the order of 12,5 billion dollars), and later can penetrate the MBT market. A general analysis of the world market shows that the greatest opportunities are likely to appear on the American continent with the largest share of the United States, while Eastern Europe (including the Russian Federation), developing modern armored forces, will take the second place.

Western and Central Asia, the Middle East and Western Europe will also contribute, although much of the combat vehicles in these regions have been relatively recently purchased or upgraded.

Ctrl Enter
Noticed oshЫbku Highlight text and press. Ctrl + Enter
We are
Overview of armored transporters and infantry fighting vehicles (Part of 1)Remote-controlled turret BattleGuard passed the test
13 comments
Information
Dear reader, to leave comments on the publication, you must to register.