3 September 2015
3
After the outbreak of the First World War, the Russian military began to receive a large number of letters with proposals concerning the creation of new military and special equipment. The most daring ideas were offered by military and civilian specialists, as well as by simple enthusiasts. Among the authors of the original ideas was Ensign Vonlyarlyarsky. He did not offer a unique project with unprecedented potential, but he was still able to interest specialists.


Ensign Vonlyarlyarsky offered an interesting project of a promising armored car that could complement the fleet of existing army vehicles. As conceived by the author, the new armored vehicle should have a body of an unusual curved shape. Apparently, in this way it was planned to significantly improve the performance of body protection without increasing the mass of the entire machine. Indeed, a large number of armored cars of that time had protection in the form of even armor plates mounted vertically or at a slight angle. The concept of rational booking angles was then absent, but there were already some considerations on this subject.

Armored vehicles with machine guns, conceived by Ensign Vonlyarlyarsky, was of great interest. However, to determine the actual capabilities of the machine, it was necessary to build and test a prototype. The prototype was built by the workshop of the Armor Department of the High Automotive School. Specialists of the department made an armored body of an unusual shape and installed it on one of the available chassis. 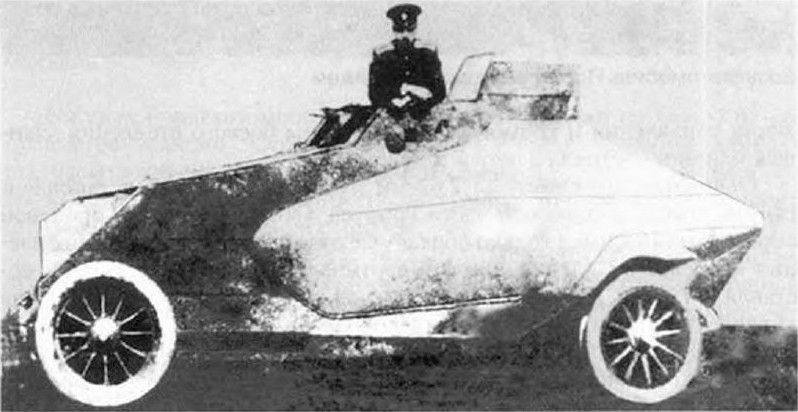 It is known that the chassis of the French company Renault became the basis for the prototype of the new armored car. According to some reports, these were French-made Renault armored vehicle units, supplied in accordance with the 1914 contract of the year. According to other sources, the chassis was borrowed from a certain car of an unidentified model. Anyway, all the extra parts were removed from the base chassis, in the place of which a new armored hull was placed.

According to reports, the Renault chassis was equipped with an HP 40 engine. French production. The mechanical transmission transmitted torque only to the rear wheels. Both axles were mounted on leaf springs. Used wheels with knitting needles. The front axle had control mechanisms and was equipped with single-wheel wheels. On the rear axle were provided dual.

The main objective of the new project was to increase the level of protection of the crew, which affected the design and shape of the armored corps. At the same time, the layout of its internal volumes was standard for such equipment of the First World War. In front of the hull housed the engine, behind which was located the control post with the driver's workplace. All the hull feed was given to the fighting compartment with a rotating turret and a machine gun in the embrasure.

The engine compartment of the hull and the front of the habitable volume were made of straight sheets of armor. On the frame they mounted large sides, between which an inclined roof of the hood was provided. The front of the engine compartment, apparently, was closed with a panel with blinds. Behind the top of the hood sheet was a frontal hull detail with two inspection hatches.

During the First World War, the vast majority of armored vehicles entered the battle, moving in reverse. In this case, the crew was reliably protected from the bullets of the enemy, and the arrows could successfully carry out the task. The armored car of the Vonlyarlyarsky design should also have been attacked “backwards”. Such a feature of its use was one of the main reasons for the appearance of an unusual armored corps.

In order to increase the level of protection of the crew when firing from behind, as well as to maintain an acceptable weight, the fighting compartment of the new armored car had an unusual curved hull. The middle and aft parts of the hull were assembled from several curved parts. Thus, the curved sides of the fighting compartment were connected to the straight panels of the engine compartment and the control compartment, and the hull stern had a shape that was close to conical. Due to such a complex form, it was probably planned to provide an increased level of protection. In fact, it was an early unusual application of rational booking angles.

A cylindrical tower was located on the straight roof of the building. It planned to install one of two machine guns "Maxim". The second machine gun was supposed to be in the embrasure of one of the feed parts. Thus, when reversing a car, both machine guns could effectively fire at targets on the battlefield.

The crew of a prospective armored car was supposed to consist of three or four people. The driver and the commander (if the latter was provided for by the project) were located in the control compartment, in the fighting compartment - two arrows. One had to manage the tower weapons, the second - fodder. To observe the environment in the frontal section of the control room there were two inspection hatches with flaps. The shooters should use the existing embrasures. To get inside the car in the roof of the case, above the driver’s workplace, a hatch was provided. There is no reliable information about other hatches or doors.

The exact parameters of the resulting armored vehicle are unknown. Apparently, its length did not exceed 4,5-5 m, the width and height fit into 2-2,5 m, and the combat weight did not exceed 2,5-3 t. At the same time, it was possible to speak of a relatively high level of protection for the crew and internal units. Driving characteristics of the built prototype could also be quite good. However, the cross-country ability of the vehicle was worsened by the wheel formula 4х2.

It should be noted that speed, power reserve, parameters of obstacles to be overcome and other characteristics of mobility could be improved by using a different chassis. In addition, we should not forget that the first prototype of an armored car of the design of Ensign Vonlyarlyarsky was probably built to test the original proposal for the hull construction. 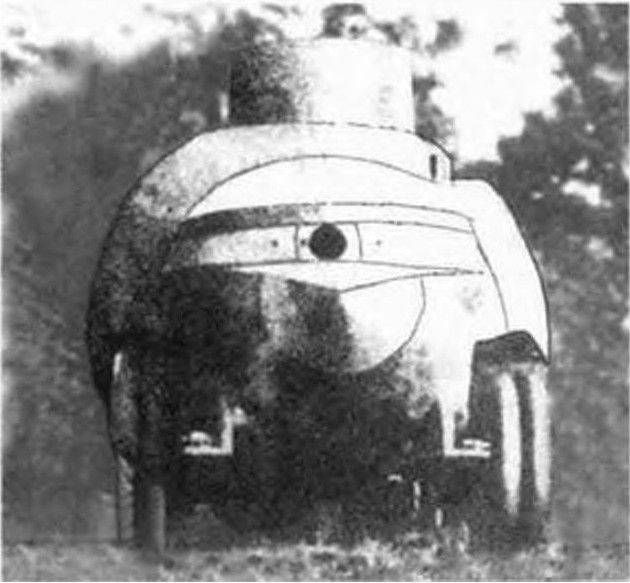 The assembly of the first armored vehicle of the new model was carried out in March 1915 by specialists of the High Automotive School. Apparently, during the manufacture of curved parts, the specialists had to face certain difficulties, since the technologies that existed at that time imposed certain restrictions on the design of new products. However, the task was completed, and in the spring of an experienced armored car came to the test.

Details of the test are unknown. It can be assumed that the armored vehicle successfully overcame the test tracks, and also showed good performance of protection and firepower. In general, the project was recognized as successful. According to the test results, a preliminary decision was made to assemble several new armored cars.

It was assumed that before the end of 1915, the Izhora plant would manufacture two armored hulls of the original design and install them on the existing chassis. In this case, the army could count on at least three armored vehicles of the Vonlyarlyarsky design, which had rather high characteristics. We can not exclude the fact that the military made plans for the construction of such equipment on 1916 and subsequent years.

However, the prototype armored car remained the only machine of its type. With all its advantages, the project of ensign Vonlyarlyarsky had one serious drawback. Because of the main features of the design, primarily because of the complex shape of the body parts, the armored car was extremely expensive. The construction of just one prototype cost the military department 5900 rubles - much more expensive than any other armored car of that time.

With all the advantages, the prospective armored car had a fatal drawback in the form of the complexity of manufacturing the hull and, as a consequence, the overall high cost of production. The technologies of that time did not allow simply and at minimal cost to master the production of curved parts for enclosures. The military could not afford not only the massive construction of such equipment, but also the release of several additional samples. As a result, it was decided to completely abandon the project proposed by Vonlyarlyarsky.

The fate of the only armored car is unknown. Most likely, the hull was dismantled and sent to melted down. Chassis brand "Renault", in turn, used for its intended purpose. All the project documentation was sent to the archive and was never returned to it. The project of ensign Vonlyarlyarsky was too brave for his time. Nevertheless, the idea of ​​equipping military equipment with curved armor details later found its application in some other areas.