August 29 2015
49
Director of the Center for Analysis of Strategies and Technologies, Executive Director of the Union of Russian Gunsmiths Ruslan Pukhov gave an interview to the newspaper Novye Izvestia Sergei Putilova. We publish the text of the interview in our blog. 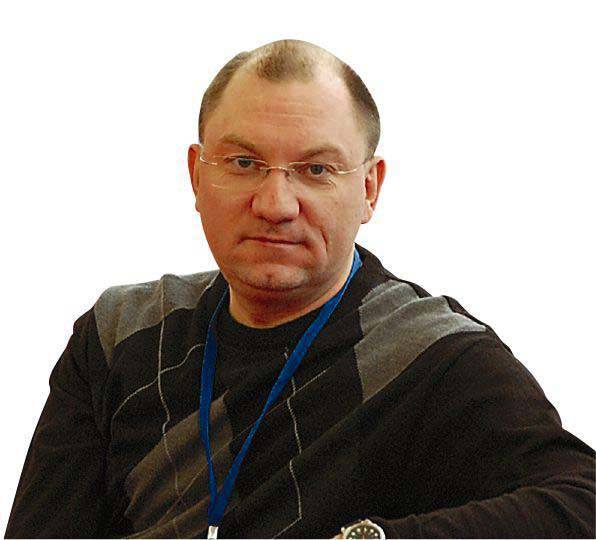 According to the Stockholm Peace Research Institute (SIPRI), Russia retains the second place in the world ranking of arms dealers after the United States. It can be said that the production and sale weapons for export remain among the few effectively working sectors in the severe crisis of the Russian economy. However, at the same time, the Russian defense industry has many problems associated with Western sanctions, the breakdown of cooperative ties with Ukraine, a scandalous history with Mistrals. The achievements and problems of the “NI” industry were discussed with a member of the public council of the Ministry of Defense of the Russian Federation, the executive director of the Union of Russian gunsmiths, the head of the Center for Analysis of Strategies and Technologies Ruslan PUHOV.

- Is it possible to say that Russia is strengthening its position in the global arms market, as follows from authoritative international ratings?

- No, I believe that, given the imminent saturation of the Algerian market, the difficult economic situation in Venezuela, the tightening of the competitive environment in India and Vietnam, Russian arms exports are expected to stagnate or even drop in sales. In the coming years, France will strengthen its position in the market, which, after a ten-year hiatus, returned to the military market. aviation technicians selling their Rafale fighters to Egypt and Qatar this year. I think in the near future it will be France that will become the second world exporter of arms, pushing our country aside. A relatively new notable player in this market, South Korea, is rapidly increasing sales. Israeli sales are steadily growing, Turkey shows great ambitions. So it’s becoming increasingly difficult to sell weapons - competition is really growing, and these are not words on duty.

- But after all, for now we are in the second place of honor after the undisputed world leader - America?

- Nominally, Russian arms exports have been growing steadily since the 1999 of the year, and in recent years have exceeded 15 billions of dollars. Although it is usually said that Russia ranks second in terms of arms supplies, in reality this is not always the case. Periodically, the UK jumps to the figure of eight billion pounds, and thus arithmetically pushes Russia into third place. But the question is whether the UK can be considered an autonomous subject of the world arms market. The fact is that up to half of British exports go to the American market, and British corporations are very closely integrated with the Americans. In addition, British exports include participation in international European programs, for example, in the production of the Eurofighter / Typhoon fighter. So methodologically Russia really, probably, takes the second place. However, one must keep in mind that the marked increase in the volume of Russian arms exports is nominal figures. And if we take into account dollar inflation, especially accelerated in the past few years, with the beginning of the famous quantitative easing of the Fed, it is likely that our military exports will stagnate somewhere from 2012 – 2013.

- And how to treat this: as a loss of competitive positions?

- Well no. This is perfectly normal: no arms exporter, with the possible exception of Israel, has grown as long and stable as Russia. All other suppliers had very strong fluctuations in supply volumes. The slowdown in the growth of Russian exports is associated with increased competition in our main - “anchor” - Indian market. In addition, somewhere since the mid-2000s, China has sharply reduced purchases, whose defense industry itself is capable of meeting most of the needs of its army. Although with the beginning of the new decade, Chinese purchases began to grow again.

- Where are Russian weapons going at all and is the circle of its customers changing?

- The main buyers of our weapons in the past few years have been India, Algeria, Vietnam, Venezuela, Iraq and China. If we talk about recent developments in this area, then we should note the sudden appearance among the major buyers of Iraq, and last year this country even came in second place in terms of supply after India. In addition, there is clearly growing demand from African countries that have never practiced major arms purchases before. But now such states as Uganda, Cameroon, Angola, are buying weapons from Russia for hundreds of millions of dollars.

- How did Western sanctions, including a ban on the delivery of dual-use technologies to Russia, affect arms exports? And did the gap in cooperative ties with Ukraine affect him?

“I don’t know the specific cases of the breakdown of export contracts due to the suspension of cooperation with Ukraine, but theoretically they could be in the segments of aviation weapons, helicopter engineering and shipbuilding. But it seems to me that the Ukrainian embargo does not extend in most cases to export transactions, but concerns only the production of weapons and military equipment in the interests of the Russian law enforcement agencies. The same applies to the impact of Western sanctions on our arms market.

- How can you assess the scandalous situation with the “Mistrals” - who in the end won, and who lost?

- In my opinion, both sides lost. I have always been a supporter of the acquisition of the “Mistral” by the Russian Navy, although I agree with the opinion of some of my colleagues that these ships are not a priority compared to the purchases of patrol ships, minesweepers and submarines. Nevertheless, I am convinced that a balanced fleet must have in its composition the means of long-distance projection of force. However, the loss of Russia as a result of the cancellation of the transaction is less than the French costs. In the end, Russia received its money back: according to my French sources, the refund amount was 1,168 billion dollars. The experience of cooperation with the French shipbuilders also gained. At the same time, we avoided the risks associated with the operation of these ships. For example, no one imagined the full cost of such exploitation. And in the current economic situation, this is not an idle question. France suffered serious financial and image losses. In addition to the already returned funds, the French will have to spend money on maintaining in a normal state both Mistral. The French Navy does not need these ships, and selling them for export will be very difficult.

- How is our military-technical cooperation with Syria, Iran and other regimes that have difficult relations with the West?

- It is clear that after three years of civil war, Syria, almost already destroyed as a state, does not have the resources to purchase expensive aircraft platforms and new air defense systems. For this reason, even the transfer of already contracted and partially paid armaments - the MiG-29M and S-300PMU fighters did not take place. I think that now the Syrians are most in need of ammunition, ammunition, light and small arms, communications equipment and drones. I believe that in some of these segments cooperation between Russia and Syria takes place. As for Iran, then, as is known, an embargo of the UN Security Council on the supply of arms operates against this country. The question of resuming the project to sell our anti-aircraft missile systems to Iran, which are not subject to the UN embargo, is currently being discussed. Probably, in the near future the corresponding contract will be concluded. As for the prospects of military-technical cooperation between Russia and Iran after the lifting of UN restrictions, I am afraid that Beijing, not Moscow, will become Tehran’s preferred partner in this area.

Ctrl Enter
Noticed oshЫbku Highlight text and press. Ctrl + Enter
We are
What we lost with MistralList of destroyed the largest and most high-tech enterprises
49 comments
Information
Dear reader, to leave comments on the publication, you must to register.