The newest Chinese tank ZTZ-99A2 against the Russian T-90MS: which is better?

August 29 2015
117
At a military parade in Beijing dedicated to the 70th anniversary of the Victory in World War II, the armed forces of China will present their latest tank, known as the ZTZ-99A2. For the first time, information that Chinese engineers are working on a deep modernization of their main combat tank ZTZ-99, appeared back in 2007. Actually, there was no information. Just according to the old Chinese tradition, the leak of one single photograph was organized, on which this combat vehicle was depicted. True, as it now turns out, most of the equipment on it was in the form of layouts.


Then, in order to keep the interest in the car unabated, the Chinese military several times organized leaks of photographic materials. From them it was possible to understand that the tank is being actively tested. It was expected that the upgraded ZTZ-99 will demonstrate 1 on October 2009, when China celebrated 60 on the anniversary of the founding of the people's republic. But, to the chagrin of military experts, the newest tank did not appear. 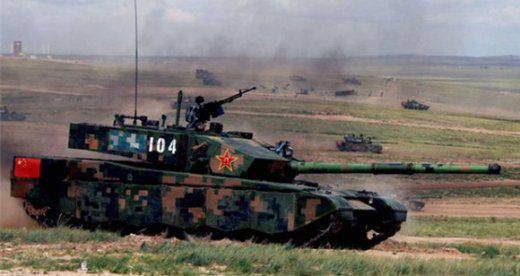 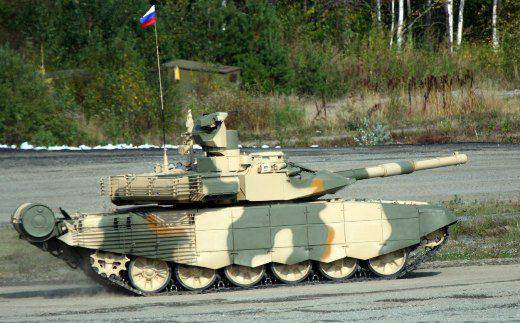 T-90MS
Deliveries of new tanks began, apparently, in the summer of 2007. Then for the first time a whole train was noticed. As it became known later, the elite 112-I mechanized division of the 38-th army of the Beijing military district became one of the units where these combat vehicles were sent in the first place.

In the 2014 year, these previously secret tanks were demonstrated at the exercises of the Shanghai Cooperation Organization "2014 Peace Mission" at the training ground in the autonomous region of Inner Mongolia, China. The technique was introduced into the training battles of the above-mentioned 112-th mechanized division.

As is usually the case with the Chinese, there is practically no official data on the ZTZ-99A2, it is known that almost all of its design was modified on the new tank. Radical refinement has undergone the tower. The machine has received more powerful multi-layered armor. It is believed that the applied dynamic protection is capable of much more effectively reducing the effect of tandem warheads of anti-tank missiles. In addition, the “reactive armor” is installed more rationally, the uncovered zones on the tower and on the hull are much smaller. 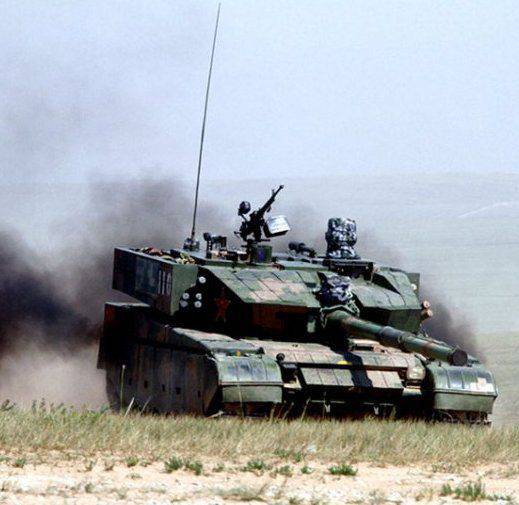 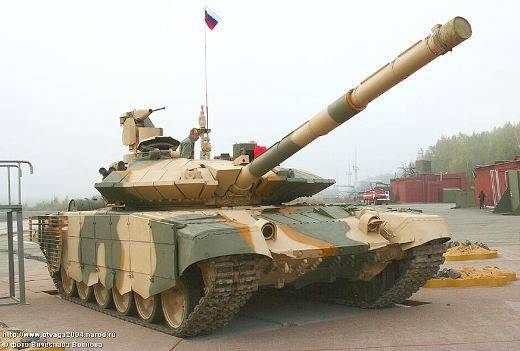 The rapid development of Chinese electronics affected the quality of the sights, they were also refined, the thermal imaging channel appeared in the commander's panoramic sight. The laser complex of active countermeasures was also significantly upgraded. Chinese designers had to improve the characteristics of mobility and firepower.

The gun of the tank remained the same: it is a clone of the Soviet 125-mm gun, although there were reports of the development of 140-mm guns.

The engine was used 1500-strong diesel, however, given that the tank "got better", according to some sources, up to 58 tons, the mobility characteristics remained at the level of foreign cars of the third generation. The maximum speed is estimated at 70-75 kilometers per hour.

The tank has an information management system, new means of communication and navigation.

If to compare the newest Chinese tank with the Russian T-90MS, then, according to the available data, both cars are about equivalent. For example, if we talk about the characteristics of protection, the machine from the Middle Kingdom is very weak, in contrast to Nizhny Tagil, covered from the sides. To understand this, just look at the photo. Apparently, the Chinese designers very much hope for the capabilities of the laser complex of active counteraction, but he has a lot of restrictions in work, and he cannot fight with sub-caliber ammunition.

According to military experts, the capabilities of sighting systems in tanks, at least, are equivalent. Nothing new, superior sight "Pine-U" was created. True, the Russian car still has an understudy-sight, which the Chinese do not have. Also on the T-90MS mounted video cameras that allow for a circular review of the area. ZTZ-99A2 is not yet equipped with such a system. The Chinese do not have remote-controlled machine gun installations. Moreover, such a system is present on the export tank VT-4. Probably, it is still “raw”, and therefore it was not put on a PLA machine.

The armament of the tanks is also about the same: modifications of the Soviet 2А46. The Chinese have repeatedly stated the gigantic success in the development and production of new projectiles, but even Western experts are skeptical of such information. Their ammunition is approximately Russian. The same applies to guided weapons: the Chinese have bought from Russia a license for the ATNG 9М119 “Reflex”.

According to some information, the version of the upgraded T-90 tank can have a completely new gun, the 2-82, similar to the Armata standing on the T-14, then our tank will get a significant lead in firepower.

Many are surprised by the significantly increased mass of the Chinese tank. It's all about the not quite rationally designed engine-transmission compartment (MTO), where you had to implant an engine that is much larger than the Russian B-92С2F. And, unlike the Chelyabinsk engine, the engine is still placed along the hull, as in Western tanks. As a result, it turned out to be disproportionately long and weighted. True, there is one advantage: the power unit and transmission are made in the form of a monoblock, which greatly facilitates the replacement.

Judging by official data, the Chinese tank surpasses the Russian one in maximum speed. But, according to some data, the superiority of ZTZ-99A2 is minimal, since the machines have almost the same power density. And, there were reports that at the T-90MS test sites it was easy to accelerate to 70 kilometers per hour.

True, in contrast to the tank from Nizhny Tagil, the Chinese car is being mass-produced, while we still think whether it is worth buying the upgraded T-90, waiting for the appearance of “Armata” in the troops.

Ctrl Enter
Noticed oshЫbku Highlight text and press. Ctrl + Enter
We are
Tank T-90MS: Analysis of the main characteristics and possible ways to further improve the combat qualitiesThe best main battle tanks of the world 2012 of the year
117 comments
Information
Dear reader, to leave comments on the publication, you must to register.