"Bastion": a reliable guard of the sea coast 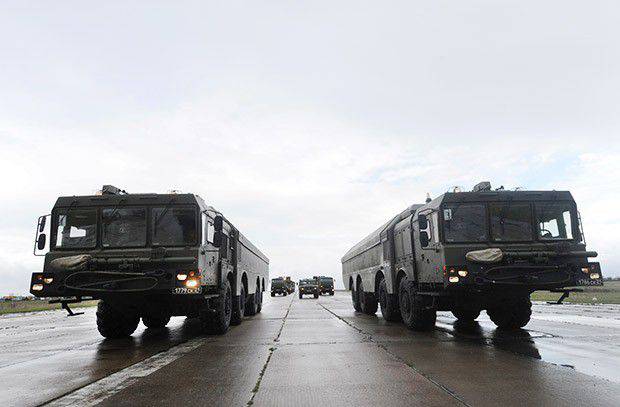 In March, 2014, the coastal missile system "Bastion" became the "shield" of the Crimea, forcing the squadron of NATO warships to move away from the coast of the peninsula

After the demonstration of the television documentary “Crimea. Way to the Homeland ”, many even skeptical Russian viewers became more proud to talk about our weapons. And the reason was the phrase of Vladimir Putin about a certain weapon that scared NATO warships. According to the president, it was the Bastion coastal missile system. Putin explained that "so far no one has such weapons" and "this is perhaps the most efficient coastal complex in the world today." After the complex was transferred from the mainland and deployed in the United States for space exploration in the Crimea, the group of NATO warships in the Black Sea sharply went away from Russian shores.

According to media reports, the movement of the Bastion launcher was recorded on the night from 8 to 9 in March in Sevastopol. One of the reasons for this was the ultimatum of US Secretary of State John Kerry, made the day before to Russia. It allowed the possibility of increasing NATO military forces and non-diplomatic actions of the American side. The appearance of "Bastion" in the Crimea became a "cold shower" and noticeably restrained Washington’s belligerent fervor.

The American side was well aware of the coastal missile system "Bastion", deployed on the Russian Black Sea coast long before the events in the Crimea. Therefore, only a suicide could give an order to NATO ships to pass the Straits of the Black Sea, go to the shores of the Crimea and begin an operation to "force" Moscow to something. The Bastion cruise missile is capable of hitting a target at a distance of 500 km. In other words, having started from the region of Sevastopol, to fly over the Black Sea, to “get” a target near the coast of Turkey and make a hole in its side the size of a tram car. For comparison: the distance between Sevastopol and Istanbul in a straight line is slightly more than 552 km.

What is this "miracle weapon" that has become a reliable missile "shield" for the Crimea?

The operational-tactical anti-ship missile system “Bastion” with the “Onyx” missile (“Yakhont” - export version) was developed on the basis of a government decree (from 27.08.1981) at the NPO Mashinostroeniya (Reutov) under the direction of the general designer Herbert Efremov to replace the Redut and Frontier. The complex is universal on the carrier and can be placed on submarines, surface ships and boats, airplanes and ground launchers.

The ground version (from the TsKB Titan) of a self-propelled launcher (SPU) suggested placing three unified anti-ship missiles (RCC) in transport-launch containers (TLC) on the MAZ-543 chassis. From 2008, the main version was the SPU K-340P (Tekhnosoyuzproekt LLC, Belarus) on the MZKT-7930 Astrolog chassis with two TPKs that were based on the ground when fired. The general concept of the application of the complex remained unchanged.

The 3М55 Onyx (Yakhont) supersonic unified anti-ship missile has a trans-horizon shooting range and a variable flight profile, operates on the principle of shot-and-forget, unified on carriers and barely noticeable for modern radar reconnaissance equipment.

After successful state tests in the area of ​​Cape Iron Horn (Taman) in 2010, the complex entered service with the Russian army. Onyx (Yakhont) missiles are produced by Strela (Orenburg). 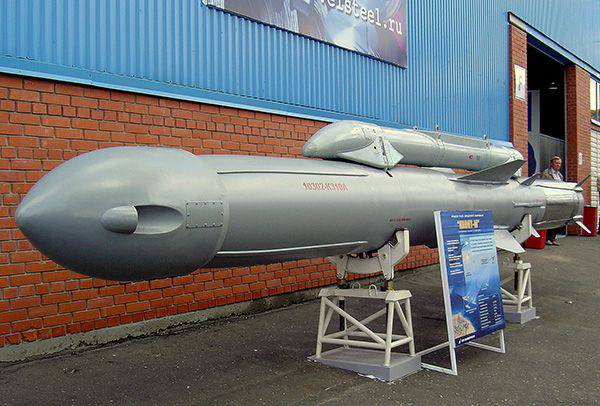 "Bastion" (3K55, according to NATO classification - SSC-5 Stooge, Russian "puppet") - coastal missile system (BRK) with anti-ship missile "Yakhont" / "Onyx". It is designed to defeat surface ships of various classes and types, operating independently and as part of groups (formations, convoys), including carrier-based, as well as ground-based radio contrast targets under conditions of intense fire and electronic countermeasures of the enemy. Created in mobile ("Bastion-P", K-300P) and stationary ("Bastion-C", K-300С, mine placement) options.

The standard composition of the battery of the BRT Bastion-P battery with K-310 Onyx / Yakhont: 4 SPU K-340P (2 TPK with RCC, crew of 3 person), 1 – 2 combat control vehicle (crew of 5 person), combat duty support vehicle and 4 K-342P transport and charging vehicles (TZM). The Bastion complex can be completed with a self-propelled radar station for over-the-horizon detection of airborne and surface targets of the Monolith-B type. The complex also includes maintenance facilities and training facilities.

The main element of the "Bastion" BRK is the universal high-precision cruise anti-ship missile "Onyx" P-800 (3М55, according to the classification of the United States, NATO - SS-N-26, Strobile, Russian "conifer cone") of medium range. Provides defeat surface and ground targets in the conditions of active fire and electronic countermeasures of the enemy. It has a normal aerodynamic scheme with the placement of the starting engine in the combustion chamber of the main engine. With a starting mass of 3000 – 3100 kg and a length of 8 m, the speed of the rocket when flying at height and at the surface reaches M = 2,6 (750 m / s) and M = 2, respectively. The maximum target destruction range is 450 – 500, up to 300 and 120 km, with altitude (up to 14 km), combined and low-altitude flight trajectory, respectively. At the final segment (about 40 km), the flight altitude is 10 – 15 m. Ready to launch - 2 minutes after power on. The rocket goes into service in an airtight TPC with a designated shelf life until the combat use of 10 years and the interregional maintenance period of 3.

The jam-resistant active-passive radar homing head with a mass of 85 kg detects a target at a distance of up to 75 km and directs a missile upon it during a wave of up to 7 points. The mass of the warhead PKR "Onyx" / "Yakhont" - 300 / 200 kg. The rocket is made using the stealth technology, unified for various carriers, has a trans-horizontal firing range of the “shot-and-forget” principle and operates in a wide altitude range at supersonic flight speeds. The PKR control system provides the evasion of enemy fire weapons, the independent distribution and classification of targets, as well as the choice of attack tactics of the intended target.

The coastal missile system "Bastion-P" protects the coast with a length of more than 600 km. Ammunition is determined by the number of SPU. The launch interval for rockets with one SPU is 2,5 seconds. The transfer of BRK from the traveling position and back is no more than 5 minutes. The autonomous combat duty is 24 hours, with additional funds up to 30 days. Guaranteed service life - 10 years.

In October, 2013 of the year, the Bastion DRC with Onyx anti-ship missiles after the march (100 km) to the firing positions area struck a surface target - a metal tank with a volume of about 0,25 cube. m at a distance of several tens of kilometers from the coast. In September, 2014, a free-drifting small-sized target, was destroyed during exercises in the Crimea by the complex.

According to experts, the combat part of the Onyx missile is designed to defeat surface targets such as the American cruiser Tikondenrog with a displacement of 10 thousand tons. And US experts rightly consider the Bastion BRK a serious threat not only for their cruisers, but also for aircraft carriers.

Currently, the Bastion DBK are the Russian Federation, Vietnam and Syria. In the Russian army, three complexes are in service with the 11th separate coastal missile and artillery brigade of the Black Sea Fleet. These complexes are quite enough to cover not only the Crimean, but the entire Russian Black Sea coast. Earlier, Admiral Viktor Chirkov said that in the period until 2020, our coastal troops fleet should receive about 20 new coastal missile systems such as "Bastion" and "Ball". According to some reports, the deployment of the "Bastion" was planned on the Kuril Islands. It is very likely that a certain amount of Bastion DBK will be located on the long Russian coast in the Arctic, due to the growing role and importance of this region for the Russian Federation.

The first foreign buyer of the Russian BRT Bastion-P was Vietnam, which today has two complexes. The proceeds from this contract funds allowed to complete the necessary work at the final stage of the complex.

Syria became the second foreign owner of this formidable defensive weapon. The first and second Bastion-P battery packs Syrians received in August 2010 and June 2011, respectively. And in July, the Syrian Bastion was tested for the first time at a joint exercise of the Navy and coastal defense forces by 2012 for the first time. These complexes have become one of the reasons for the cautious actions of Western warships in this area of ​​the Mediterranean, not risking a close approach to the Syrian coast.

According to media reports, in 2013, Israel launched an air strike on the Syrian port of Latakia. The reason for this was the desire to destroy the arsenal of anti-ship missiles "Yakhont". Subsequently, Benjamin Netanyahu indirectly confirmed this. He stated that "he will not allow radical groups to get modern weapons from the arsenals of the Syrian army." According to janes.com, The Wall Street Journal and other American media, after this attack, part of the Yakhont anti-ship missile was disassembled and delivered to Lebanon to protect this country from Israeli attacks aviation.

It is known that currently negotiations are underway to sell the coastal missile system "Bastion-P" with the anti-ship missile complex "Yakhont" to Venezuela. It is not excluded that in the near future this complex will become a subject of negotiations with some other countries of Southeast Asia. This is due to the active build-up of naval forces in the region and the resulting increased attention to the defense of the sea coast.