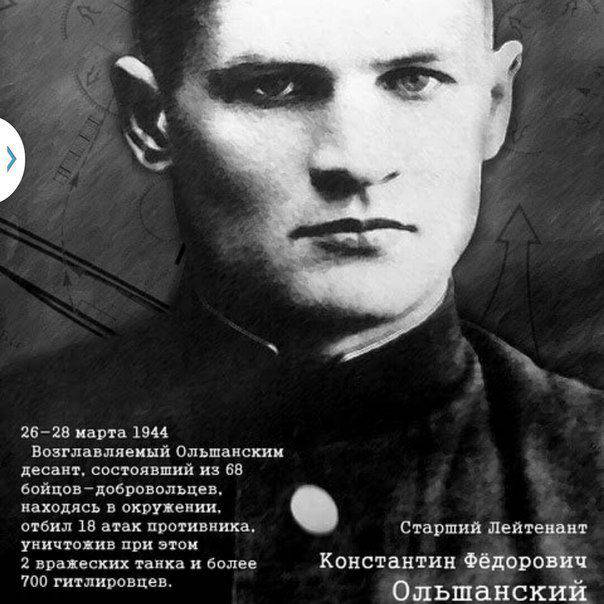 In the postwar years, and even until the collapse of the Soviet Union, there was no man in Nikolaev who would not know about the feat of landing under the command of Senior Lieutenant Konstantin Olshansky. The fallen paratroopers were buried in the central square of the city, and a memorial was erected here in their honor. It was the only landing in stories of the war, to all without exception the participants of which Stalin ordered to assign the title of Heroes of the Soviet Union. Historical research was devoted to the names of olshans who called streets, educational institutions, ships, their exploits.

March 1944 The troops of the 3 of the Ukrainian Front conducted the Bereznegovato-Snigirevskaya operation and came close to Nikolaev. The occupants built a deeply echeloned defense crossing the peninsula between Ingul and the Bug estuary, which was held along the eastern outskirts of the city. In Nikolaev, besides the usual units of the Wehrmacht, there were SS troops and battalions of the “Vlasovites”. 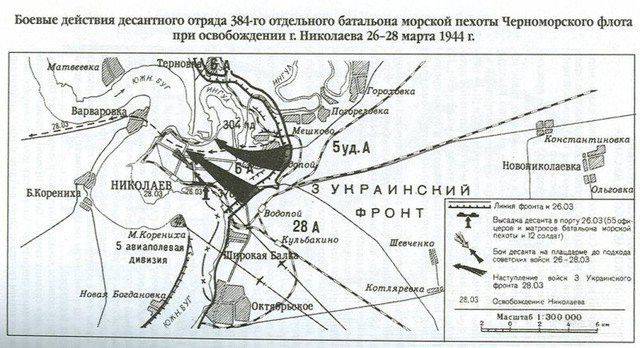 In conditions of spring thaw it was difficult to concentrate troops around the city. Therefore, the command of the 28 Army, advancing from the Epiphany, decided to land in the rear of the enemy - in the seaport area - landing forces, which had a double task: first, a sudden strike on the enemy to cause panic and confusion, and, secondly , disrupt the plans for the destruction of port buildings and structures.

The detachment was formed from 55 volunteer sailors 384-th separate battalion of marines, 10 sappers, 2 signalmen mobile radio station commander 28-th army and fisherman-guide from Epiphany. Commander of the landing was a cavalier of the Order of Alexander Nevsky, senior lieutenant KF Olshansky.

On the night of March 26, paratroopers from the Epiphany on the Bugsky estuary in the direction of Mykolayiv were paratroopers on 68 fishing boats. They secretly landed half a kilometer east of the port elevator, removed the sentries, cleared the elevator and equipped the defenses near the road leading from town to port. The main stronghold was located in the two-story Zagotzerno office. Several people lay in the trenches near the railway embankment. The rest are located in a small office building elevator and in a stone barn. 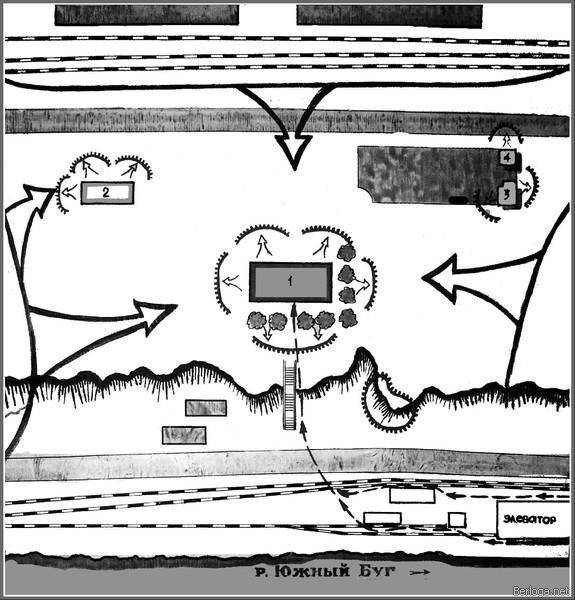 The first fire contact with the Nazis occurred in the early morning of March 26. A heavily wounded German soldier was captured, but he soon passed away. A little later, the second group of Nazis approached the barn where the paratroopers ’detachment was located under the command of the foreman of the 2 article KV Bochkovich’s article, which was completely destroyed. The fascists, deciding that there was a group of underground fighters in the building, launched a frontal attack, but came under crossfire from the division of K.V.Bochkovich and the group of foremen of 1 article Y.Ye. Forces to the battalion, the Germans launched a new offensive, covering the paratroopers' defense from three sides. Suddenly, the main forces of the detachment hit the enemy from the Zagotzerno office. The enemy ran in panic, leaving the first tens of dead on the battlefield.

The fascists pulled up four guns to the positions and the next attack began after artillery preparation. Marines suffered the first serious losses. But this attack of the enemy was repelled. The fourth attack of the enemy was accompanied by intense shelling of the positions of paratroopers from guns and six-barreled rocket mortars. The second floor of the building was destroyed. The detachment commander KF Olshansky was seriously wounded. The trenches near the railway and the elevator office were completely destroyed. Only one Y.Lisitsyn managed to get to the main forces.

And then the Germans rolled out one of the guns for direct fire and began to beat on a separate fortification, from where machine gunner GD Dermanovsky, with accurate fire, shot the Nazis. The injured fighter killed a German officer with a knife and then blew himself up and a soldier rushing towards him with a grenade.

The Germans continued the offensive with the support of two tanks. Flamethrowers, incendiary shells and smoke bombs were used against the paratroopers. The invaders tried to smoke them from the basement of the main defense point. Senior calculation PTR M.K.Khakimov direct hit incapacitated an enemy gun. It exploded and rolled over. Then he knocked out one of the tanks. The second tank was stopped by a seriously wounded Red Navy officer V.V. Khodyrev. An explosion left his hand in the left hand; he received several shrapnel wounds. Having regained consciousness, V.V. Khodyrev grabbed a bunch of grenades with his good hand and threw himself under the tank. The explosion disabled the tank, but the Red Navy himself immediately fell dead.

At the critical moment of the battle, KF Olshansky called the fire on himself. Three times Soviet artillery bombarded the battlefield, preventing the Nazis from approaching the besieged house. Twice the position of the Nazis bombed a group of Soviet attack aircraft. Soon, communication with the sailors' radio station was lost.

The detachment hoped for the advance of the front-line units, but it was delayed. KF Olshansky decides to send for the front line with the report the foreman of X. YUM. Having barely recovered from the concussion, he changes into a uniform, shot from a dead German. The paratrooper managed to cross the front line, but suddenly he hit a mine. The explosion tore his foot off his left foot. Overcoming the pain, he tied up the wound with pieces of his vest and wire. In the half-forgetting of the icy water of the estuary, Lisitsyn made his way to his own.

To help the Olshansky command, on the night of March 27, they attempted to send a landing of a hundred men, but due to the lack of floating facilities, the undertaking fell through. March 27 enemy attacks on the positions of paratroopers resumed. The enemy again used flamethrowers and smoke bombs. The events of this day are difficult to recover. Each of the survivors of suffocation and wounds periodically fainted. The enemies offered to surrender, promising to save lives, to provide food and treatment. The sailors responded to these proposals with accurate fire. In the evening, the commander of the detachment, KF Olshansky, was killed by a submachine gunner.

On the night of 27 on 28 March, twelve landing parties survived. Most of them were seriously injured, contused, poisoned by smoke. The fascists did not dare to approach the ruins of the Zagotzerno office. They gathered their wounded and retreated into the night. No one else attacked the paratroopers: the enemy was leaving the city to avoid being surrounded.

Subsequently, a special commission investigated the actions of the paratroopers. In accordance with her conclusions at the detachment's position, the enemy threw 3 infantry battalions, two medium tanks, four 75-millimeter guns, two multi-barreled mortars, flamethrowers. For two days, the olshansy repulsed the enemy's 18 attacks, disabling German soldiers and officers around 700. Their actions upset the enemy defenses, accelerated his expulsion from Nikolaev.

The events behind the scenes are also interesting. On the eve of Nikolayev, there was a rumor that the Nazis had thrown grain in the building of the porto-elevator. On the morning of March 26, half-starved townspeople reached the elevator. They were stopped by the sounds of gunfire and explosions, crazy bullets that flew hundreds of meters around. Smoke billowed up above the elevator. A rumor was born in the city, as if German soldiers had rebelled. Then, when it became clear that a landing force had landed in the rear of the enemy, the townspeople attempted to help them. A little-known fact: during the analysis of debris in the battlefield was found the corpse of a woman with a can. Apparently, during the break between the attacks, she tried to bring the wounded paratroopers water.

Meanwhile, among the fascists began to panic. The paratroopers thwarted the plans of hijacking the working-age population of Nikolaev to Germany, prevented the explosion of a number of mined objects, such as a porto-elevator, the building of the third polyclinic, and several others. The Germans hastily retreated to the Varvarovsky Bridge, so as not to get surrounded. And when the forward detachments of the 28 motorcycle battalion of intelligence blocked the bridge in March, the situation of the remaining invaders in the city became hopeless. Some of them, in despair, rushed into the crossfire of the scouts, others tried to cross the estuary, others to surrender in mass.

One of the detachments of the same motorcycle battalion was the first to make its way to the place of the battle of the landing of Olshansky. The scouts saw a terrible picture: smoking ruins, broken German equipment and hundreds of Nazi corpses, which were littered with approaches to the fortifications of the landing force. In their hands they carried the surviving Olshans.

From 68 paratroopers survived 12, all - from the battalion of marines. Three soon died from their injuries, two more died in battles in August 1944. Six of the surviving paratroopers in March 1964 g. he was awarded the title of honorary citizens of Nikolaev. Unfortunately, none of them have left. The latest in 1995 g. Nikolaev resident Nikita Andreevich Grebenyuk died.

That, in short, is the story of the landing. And those who wish to learn about this heroic page in the history of Nikolaev, can visit the people's museum of military glory of the olshantse sailors, which, with the help of the Nikolaev seaport, was opened in 1964. The museum exposition, carefully preserved for many decades, convincingly tells about the unforgettable events of March 1944. 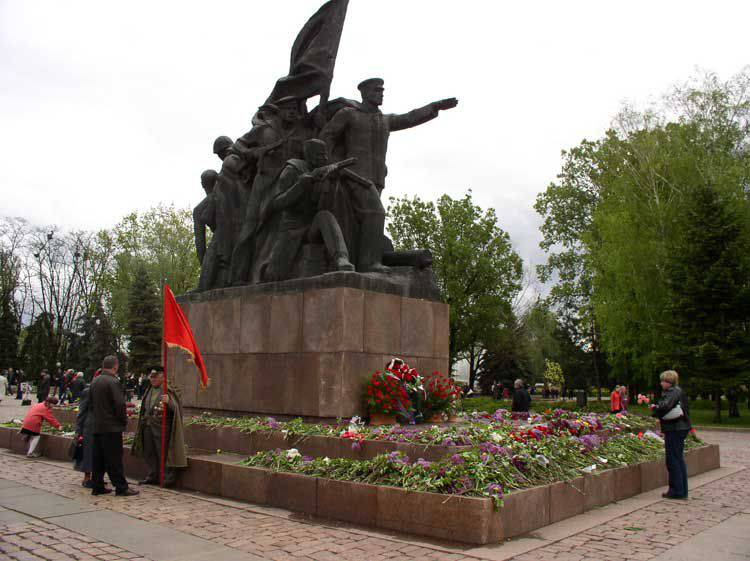 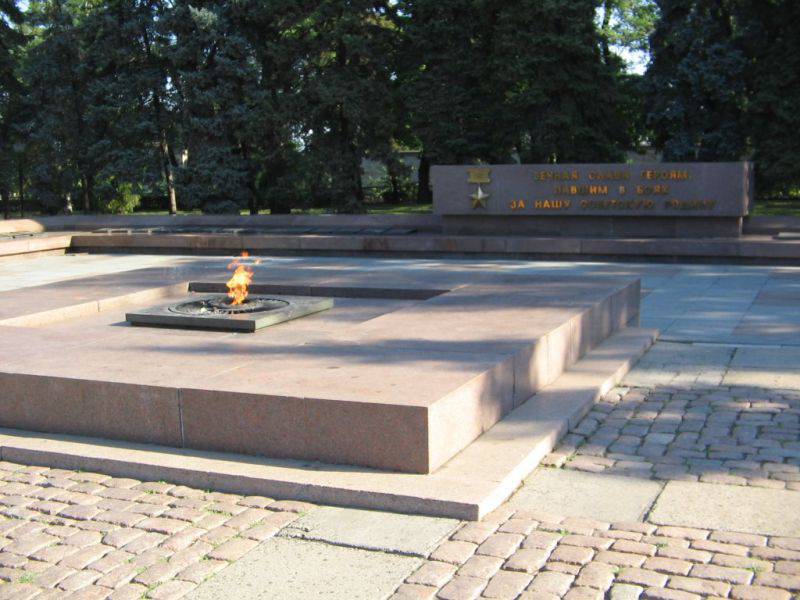 Ctrl Enter
Noticed oshЫbku Highlight text and press. Ctrl + Enter
We are
Myths of the Great Patriotic. Did Stalin have prostration in the first days of the war?Trophy armored vehicles Wehrmacht. France
15 comments
Information
Dear reader, to leave comments on the publication, you must to register.