Patterns of dealing with the Islamists


On the eve of the opening of the MAKS-2015 salon, Rosoboronexport signed a contract for the supply of four Mi-35 attack helicopters to the armed forces of Pakistan. According to a military diplomatic source, rotorcraft are designed for counter-terrorist operations.

From the 1945 year to the present, numerous wars and armed conflicts have had a significant impact on the formation of the market for helicopters, which today play an important role in the fight against terrorist organizations. To ensure the fighting required the aircraft, capable of promptly redeploy military units and equipment, as well as provide direct support to the landing force on the battlefield.

The first helicopters designed to carry out these tasks took part in the Korean 1950 – 1953 war. One of the symbols of American aggression in Vietnam was UH-1 “Huey”. These machines were used against the partisans and showed themselves well in difficult climatic conditions. Subsequently, the role of helicopters in conflicts where fighting was conducted against the rebels, only increased.

In South Asia, one of the countries that is constantly faced with the need to use helicopters in the conduct of counter-terrorism actions is Pakistan.

However helicopter combat park aviation Pakistan is limited. Currently, the army aviation has 35 AH-1F “Cobra” aircraft, which are distributed between the three squadrons of the 404th aviation group.

The modernized "Cobra" is already poorly suited to perform modern tasks. In addition to the limited payload, the range of weapons that the AH-1F can use is extremely limited and consists of the M20 197-mm automatic gun, the 70-mm Hydra (Hydra) automatic missile and the TOW ATGM (TOW). One of the major drawbacks of AH-1F in the conduct of counter-terrorist actions is the relatively weak booking, which provides effective protection only from bullets of caliber 7,62 caliber. 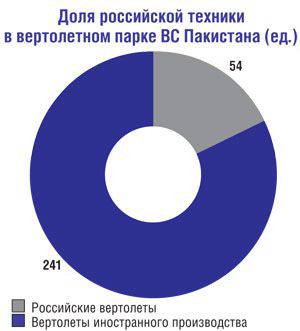 However, later Pakistan faced significant problems when trying to get contracts for the purchase of new combat helicopters. The United States for several reasons (including political) refused to supply AH-64D / E and AH-1Z. Turkey is having trouble developing T-129. Thus, the focus was on the products of Russian and Chinese helicopter builders. In the autumn of 2014, it became aware of the consultations between Russia and Pakistan on the Mi-35M combat helicopters.

The head of Rostec, Sergey Chemezov, in particular, announced the lifting of the Russian embargo on the export of weapons and military equipment to Pakistan and negotiations on the sale of a batch of helicopters to this country. Later, the Russian Foreign Ministry clarified that this was about the delivery of Mi-35, since Pakistan has a fleet of Mi-17 vehicles previously transferred to it by the United States as an aid in the fight against militants.

For a number of parameters, the Mi-35M compares favorably with competitors. The design of the helicopter, capable of transporting reconnaissance and sabotage group and support it with fire, was tested during the Soviet period in the Afghan war. Then the Mi-24 and its modifications successfully carried out anti-insurgent missions. The Mi-35M is distinguished by a wide range of weapons used, which include universal cannon containers UPK-23 (with 23-mm guns GSH-23L), NAR units of the C-8 or C-13 type of a millimeter caliber 80 and 122, respectively, anti-tank missile complexes, respectively Sturm-B or Attack. The use of night vision goggles OVN-1 "bevel" allows you to confidently fly a helicopter in the dark. Reservations protects against bullets caliber 7,62 – 12,7 millimeter. Thus, the Mi-35M will significantly enhance the capabilities of Pakistan's army aviation to fight the Islamists.

At the same time, the experience of operating the Mi-24 in Afghanistan clearly showed that booking helicopters of this type does not provide adequate protection against rebel air defense systems. The cockpit and the vital components of the attack helicopter must be protected from the impact of large-caliber bullets, and therefore the Pakistan Defense Ministry also showed interest in the Russian Night Helicopter Mi-28HE.

The Pakistani side is taking concrete steps to acquire Russian helicopter technology for use in counterterrorism operations. Speaking on Radio Pakistan in November 2014, Russian Ambassador Alexei Dedov announced from a political point of view that the sale of Mi-35M helicopters to Pakistan. Their exact number, which is discussed during the negotiations, the diplomat did not name. 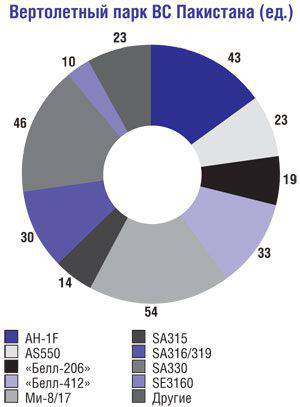 One of the official representatives of Islamabad, commenting on the statement of the Russian ambassador, said that it was about the possibility of acquiring up to 20 machines. It is assumed that the ground forces of Pakistan have chosen Russian helicopters because of the already gained positive experience of their use, in particular the Mi-8 / 17.

Islamabad is interested in acquiring new Mi-28HE. At the beginning of December 2014 of the year at the 8 International Armaments Exhibition in Karachi, IDEAS 2014 (8th International Defense Exhibition and Seminar), the Russian delegation held special technical presentations Mi-28НЭ for the Ministry of Defense of Pakistan. According to the results of IDEAS 2014, the Minister of Defense Industry of the country Rana Tanvir Hussein confirmed that negotiations were underway on the acquisition of an unspecified number of Mi-28HE drums. During the exhibition, one of the sources said that Russia had offered Pakistan four Mi-28HEs in order to support a possible deal to sell the Mi-35M. “These helicopters can be transferred to Pakistan as part of Russia's support for Islamabad’s anti-terrorist actions,” the source informed then.

Deliveries of the Russian helicopter technology will significantly strengthen the combat potential of the country's army aviation. Despite approval by the US State Department of selling 15 AH-1Z to Pakistan, the firm contract is not currently signed. And the option of supplying Pakistan with American AH-64D / E is currently not even being considered.

Thus, it is Russian Mi-35М and Mi-28НЭ helicopters that are the best choice for Islamabad. The successful operation of the Night Hunter in Iraq has shown its ability to perform combat missions in hot and dry climatic conditions. Mi-24, on the basis of which Mi-35M was created, became a symbol of the Afghan war and showed itself in it from the positive side. Both helicopters can carry weapons that are at least as good as those installed on the AH-1Z.

The Soviet / Russian NAR C-8 and C-13 have repeatedly proved their advantage over the unguided version of the American Hydra missile, in particular in terms of the effectiveness of the impact of a high-explosive fragmentation warhead. The use of ATGM will allow the destruction of fortified firing points and the infrastructure of the rebels. Both helicopters are equipped with effective gun armament - 23-mm GSH-23L and 30-mm 2A42, respectively.

Experts believe that the acquisition by Islamabad of the Russian military helicopter technology will significantly complicate the actions of Islamist terrorist groups, including Al-Qaeda and the Islamic State.