2 September 2015
17
The events in Ferguson, Missouri, which began after a police officer shot black Michael Brown, show once again that the famous "melting pot" of the American nation is not working too effectively. And if the same black person feels today in the States as “one hundred percent American,” it is not a fact that the same white American considers him to be his “equal”. So, what happened in Ferguson should not surprise anyone! In the words of the Minister of the Interior and the gendarmes chief (1911 - 1912) A. A. Makarov (1857 - 1919): “So it was, and so it will be!” Well, how did they have it, tell the events of “red July 1919 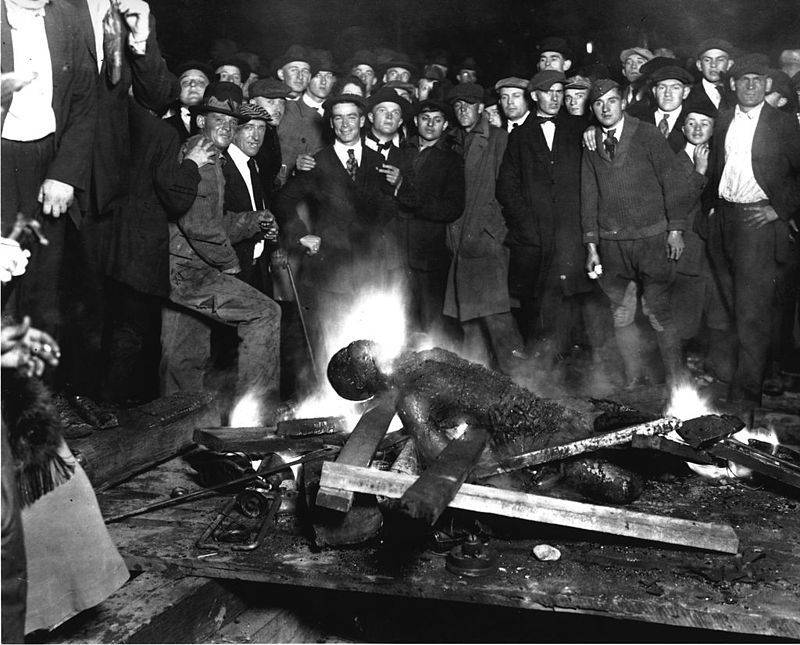 The Burning of Crowded Will Brown.

The First World War ended and American soldiers, returning home from Europe, faced the problem of housing and work. But first of all these problems were felt by the African-American soldiers. Having gone with the whites all the war, they expected to be able to fully enjoy the rights of citizenship, which had to defend in the fight, defending their homeland. But it was not there! It’s one thing the “front-line brotherhood” of the whites and blacks in the trenches and the other is the relationship in peacetime. “Black does the black work, white does the white!” At that time it was an axiom of American existence.

The reason was not only in the end of the “front-line brotherhood”. These are, above all, economic reasons. The call to the front of a huge number of workers, and besides, the flow of immigrants from Europe has dried up. The industrial North and the farms of the Midwest of America experienced a severe labor shortage. And the owners of the factories of the North had to recruit workers in the South. As a result, a significant outflow of labor migrated from the South to the North. By 1919, there were more than half a million such migrants. This was the beginning of the “great migration”. Blacks occupied white jobs. In some cities they were hired as strikebreakers (the 1917 strike was a vivid example). All this led to an increase in the hostility of the white population. And then there is the rapid demobilization of the military, which gave a sharp increase in cheap labor in the cities. But, alas, no one wanted to deal with their employment. As, however, did not do and control the prices of goods. The result - unemployment, inflation and increased competition for places in the workplace. And then there are negros, ready to work at half price. What else could they do? Families need to be fed! Not surprisingly, in the spring and summer of 1919, racial riots broke out in 22 American cities and towns. The most massive and bloody occurred in Chicago.

On Sunday, July 27, several white bathers attacked young black Americans who swam on Lake Michigan near one of the “white beaches”. As a result, an African American boy died. And so it began ... In the five days were pogroms, during which victims were 23 15 Negro and white, more than 500 injured, many citizens homeless. 2 August, the Chicago Defender newspaper published an article about the beating of "unknowns of a black woman and her child." After that, events began to develop with the speed of a hurricane. Every hour, murders and arsons were committed in the city; many of the wounded did not survive from the 500. The victims lay on every street.

I had to enter into the city 4000 soldiers of the Eighth Regiment of the National Guard. The city’s funeral homes refused to accept the dead whites. White funeral bureaus did not accept black ones. The patrols did not pick up the corpses, because they did not know where to take them. One of the Chicago newspapers wrote that "every hour patrol cars with wounded men arrive at the hospitals." But the "ambulance carriage" was not enough. In the course went trucks, carts, hearses. “It is enough to be out of your area so that your brains flow out onto the dirty sidewalk,” another newspaper lamented. An unknown black man, a young woman and a three-month-old baby were found dead on the street, at the intersection of 47 Street and Wentworth Avenue. The woman tried to get into the car when the crowd grabbed her, cut her with knives, and the baby hit her head on a telegraph pole. All this time there were several policemen in the crowd, but they made no attempt to save this family. In the afternoon, all traffic south of 22 Street and north of 55 Street, west of Cottage Grove Avenue and east of Wentworth Avenue, was stopped. Large groups of whites gathered in this zone. Black people met them with sticks and stones. Even the mounted police could not do anything. The climax of the unrest was the night battle between the whites, the police and the blacks. Crowds of people rushed into the Negro neighborhoods. They shot not only blacks, but also the police. African-Americans, capturing white cars, drove around the streets and fired at rare white passers-by.

Early in the morning, a thirteen-year-old black boy stood on the porch of the house and was shot dead by a white man who tried to leave, but ran into a crowd of blacks ...

In 8 hours, over fifty policemen, horsemen and footmen, attempted to disperse the crowd, opened fire point-blank at African Americans. The wounded were taken to nearby hospitals. Total unrest lasted 13 days. The most active were immigrants from Ireland, since their territory had a common border with the Negro ghetto.

Knoxville (Tennessee). The cause of the riot is the suspicion of the murder of a white race woman by mulatto Maurice Mayes. Then the angry crowd rushed to search for the suspect. With a powerful charge of dynamite, they demolished the doors of the city prison and stormed it. Unable to find the right person for them, the rioters freed white prisoners from the 16 cells and captured weapon. Then the crowd went to the ghetto, where there was a shootout of whites with blacks. The riots lasted all day. Riot suppressed with the help of soldiers of the National Guard.

End of September. Unrest among the white population of Omaha, Nebraska. A huge crowd of "white" demanded that the police issue a black W. Brown. The reason is the same - suspicion of rape of a negro white woman. An attempt by police to disperse the crowd with water cannons did not lead to anything. The courthouse was burned down by a mob, and Lynch’s trial took place over Brown. Weapons captured during the riot, used against the police. Seven were injured during the shootout. Events began to develop rapidly and took a dangerous turn. Mayor E. Smith was captured. Miraculously, the police saved him, otherwise the gallows would be waiting for him. The riot was put down the next day.

The last riot occurred in the city of Elayne (Arkansas). The result of the unrest is the death of 200 blacks. Negroes were accused of trying to create a “socialist” trade union and the threat of a massacre for whites. As a result, 12 black sentenced to death.

The reaction of the newspapers was lightning: articles began to be published with sentimental headlines: “Negres seized in the Arkansas Riots admitted to a widespread conspiracy”, “For today, the slaughter of whites was planned”. FBI agents conducted an investigation and found out that there was no “black conspiracy”.

In the light of past events, the National Association for the Advancement of Colored People decides to send a protest to President Wilson, saying: “... shame for the mobs of attackers, including soldiers, sailors, marines who attacked innocent and innocent Negroes in the US capital. Uniformed men attacked Negroes on the streets of the city, and also pulled them out of the trams to beat them. Crowds, reportedly ... purposefully attacked any passing blacks ... The effect of such unrest in the capital will be an increase in cruelty and the danger of outbreaks of unrest elsewhere. The National Association for the Advancement of Colored People urges you, as President and Commander-in-Chief of the Armed Forces, to make a statement condemning the violence of the crowd and to ensure the implementation of such military laws as the situation requires.

“The National Association for the Advancement of Colored People asks you how long the Federal Government, with the assistance of your administration, intends to tolerate anarchy in the United States?”

And here is the statistics. During the summer-autumn period of 1919, 38 riots were revealed. As a result, 43 Negro suffered lynching. 16 was sentenced to be hanged, the rest were shot. The US government then took a passive policy toward racial riots.

Well, the term “red summer” was introduced by the Negro activist and writer D. Johnson. The secretary of the National Association for the Advancement of Colored People, he opened many local branches of this association in the USA, organized peaceful protests against racism.

Ctrl Enter
Noticed oshЫbku Highlight text and press. Ctrl + Enter
We are
Father toldThe hunt for the Blackbird
17 comments
Information
Dear reader, to leave comments on the publication, you must to register.