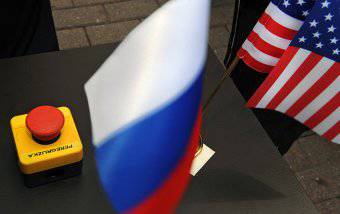 Many people have a picture when the American delegation at the first stage of the current President Obama’s rule showed off at the meeting with the delegation from Russia the famous red button on a yellow stand with the inscription PEREGRUZKA. I remember how they tried to explain to the Americans that it would be nevertheless necessary to write PEREZAGRUZKA, but the very essence of the seeming warming of Russian-American relations, despite the mistake, was obvious. All news issues on both sides of the ocean reported that the powers had finally embarked on a compromise path. Most analysts claimed that from this moment, they say, the great friendship of the Russian and American peoples will begin. Someone even began to recall words such as “Perestroika” and “The End of the Cold War”. The light of joint anti-terrorism measures, the lightning-fast adoption of Russia in the WTO, and almost the abolition of visas between states have come to light.


However, time passed. Barack Obama was gradually “bronzed” under the influence of his “friends”, supporters from Congress, and the spirit of anti-democratic semi-barbaric Russia began to hover along the corridors and cabinets of the White House in Washington.

And what about the situation with this reload-reload today? Without ashes of ash on the head, it can be said that this phenomenon is in a state of deep coma, from which only the most, as they say, “enthusiasts” are going to withdraw it. Literally the other day, Russian Foreign Minister Lavrov said that in many areas the negotiations between Moscow and Washington had reached a real dead end. In particular, Lavrov mentioned the situation with the deployment of missile defense, the trial of Viktor Bout, as well as the so-called “Magnitsky list”.

In turn, the American side, represented by Congressman John Beiner, reports that, in fact, there can be no talk of any further RESETTING, since a person who “nostalgues” the USSR times is going to return to the imperious post in Russia. Michael McFaul, the ideological inspirer of the RELOADED, decided to switch to a broken rail, saying that it was time for Russia to think again about how to return to democratic ideals. At the same time, the Americans seem to be uncomprehendingly shrugging their shoulders when they hear about Russia's retaliatory step about the very “Magnitsky list”. Recall that Russia also created a list of "undesirable" persons with American citizenship to visit our country. Victoria Nuland, representing the US Department of State, expressed the view that this move of Moscow to her personally, like the entire American people, is completely incomprehensible and “looks completely baseless”.

In general, the time is with us and with their pre-election, so the current authorities need to somehow maintain their reputation. And how to support the Americans, if no “reloading” movements, in addition to resolving the issue of importing “Bush’s legs”, are, in fact, not accepted. Well, of course, declare that in Russia there is a complete absence of any kind of democracy. Moreover, this move is proven and still allows you to keep the average American citizen in fear of Russia. Although, after the “democratic exploits” that the American authorities in Afghanistan, Iraq, Egypt and Libya demonstrated, soon and within the States themselves, those who firmly believe in the American “democratic ideals” will remain very little.

The presidents themselves now seem to have the wrong time to return to the ideas of the RESET. Moreover, most likely, both chapters (ours for sure) will change their imperious status. Is it really worthwhile in this situation to talk again about some illusive ideas of creating partnerships? So it turns out that the Russian-American PEREZAGRUZKA sat all wheels in a large quagmire. Will the power come in 2012? ..

We are in Yandex Zen
And what about our WTO?
WTO is marking time. Russia will push?
22 comments
Information
Dear reader, to leave comments on the publication, you must to register.