After World War II, France always had large and well-trained special forces of the Navy and retained “proper” capabilities in the field of delivery vehicles for combat swimmers (SDV) in the Cold War era. Reducing defense budgets and desert operations have contributed to the loss of these capabilities, but the situation for the famous Nageurs de Combat combat swimmers is changing for the better. The French were the first in the development of technology and the adoption of the Swimmer Delivery Vehicle (SDV), their fleet was the first to operate removable dry dock Dry Deck Shelter (DDS). A wide step back was taken when they were removed from the squad. fleet the last submarine of the Agosta class in 2001 and with it ended the world-famous capabilities of the French SDV. SDV devices (the French term PSM), which these submarines operated, were also decommissioned.


Instead, Commando Hubert (French special forces are akin to US Navy special forces) and DGSE (equivalent to the CIA) began to use the impressive, but inherently more limited, single-seat Stidd DPD. A lot of good things can be said about Stidd, but at another time. Simply, it is a qualitative leap in comparison with previous underwater vehicles for transporting divers Diver Propulsion Vehicle (DPV) and can tow a second swimmer, but still not the same features as the SDV.

In the future, with the adoption of nuclear submarines of the Barracuda class, the French fleet will receive SDV vehicles. From the outset, the Barracuda was designed to transport a dry DDS docking station behind the conning tower. It will be larger than the previous French DDS shelters and from it swimmers will be able to directly get into the submarine hull, is a huge advantage in terms of operation.

The new SDV for Commando Hubert is the SWUV (Special Warfare Underwater Vehicle — an underwater vehicle for special warfare) from the ECA. The company has some experience in this area, as it previously supplied SDV vehicles to the French forces. The new SWUV unit has a length of about 8,5 meters and carries six people, which makes it the largest and most functional compared to the previous French vehicles.

The French contribution to the post-war technology of special forces is often underestimated in other countries. As a rule, invisible to the outside world, in the community of special forces of the Western Navy, Commando Hubert created particularly strong ties and had a two-way exchange of ideas and tactics. So adherents of the American and British special forces should take a closer look at the French special forces.

Among the pioneers was the famous Jacques Cousteau, who played a large role in the development and promotion of scuba gear (invented after the regenerative oxygen system), and later in the 50-s of submersibles. He enjoyed international fame and is remembered for many things related to the underwater world and diving, but his organization GERS (a group of researchers of underwater depths), who developed the military version of single-place underwater tugs called Tracteur, is perhaps less well known. The French inventor Dimitri Rebikoff, who developed his own line of underwater scooters, which are generally known as the Pegasus family, is less well known to Jacques Cousteau’s contemporary. Rebikoff's projects had a significantly stronger impact on combat swimmers than Cousteau’s projects. Following Rebikoff and Cousteau, at the end of the 60s, inventor Jean Hawa developed a wide range of SDV devices. Shortly after the start of work, having switched to secret military developments, Khava could no longer have the fame that Cousteau and Rebikoff had.

When the time came to equip Commando Hubert swimmers, the official state organization GERS naturally gained an advantage. The first underwater vehicles used by Commando Hubert were the TSM (Tracteur Sous-Marins). These GERS development vehicles had basic navigation and carried a large detachable anti-ship mine on the nose. 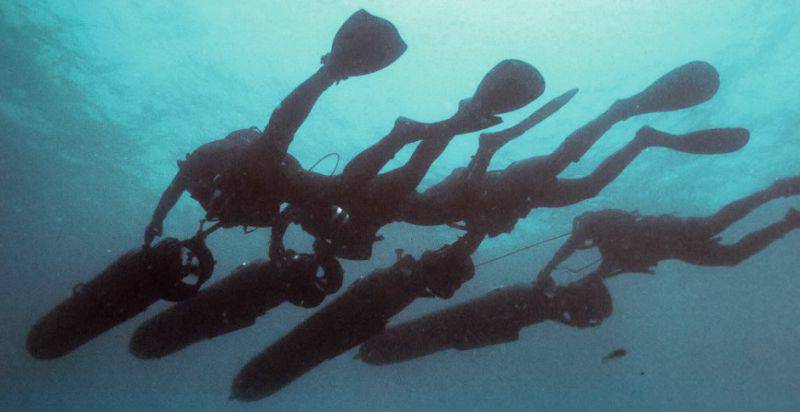 TSM devices in action. The difficulty of maintaining order of battle and navigating in the dark can be easily imagined.

The limitations of solo swimmers were obvious, and the next project was a two-seater vessel with seating positions. The PSM (Propulsor-Sous-marins) Vostock combat swimmers delivery vehicle was a unique French project, although it strongly resembled the Italian Cos.Mo.S CE2F Chariot. The streamlined hull was made of fiberglass, two swimmers sat in the cabin closer to the bow. With a hint of perspective, a transparent plexiglass screen and a cockpit lantern were installed, but they limited visibility ahead. When diving at night or in troubled waters, the forward view deteriorated further.

One of the factors hindering the operation of Vostock was that the French submarines were not adapted for the transport of these devices. It was a time when, among other major fleets, only the American fleet and Italians (top secret!) Had SDV attachment systems. The middle fleets sought to simply tie them outside, but there were serious limitations. Therefore, the French and invented a removable hangar, which could at a time when the submarine remained submerged, flooded and dried. The French called it the “suitcase”, but today this system is known as the DDS (Dry Deck Shelter) dry docking station. The French are ten years ahead of the American fleet in this area. The first docking stations were small and not so complex compared to their later American counterparts, but they were the first.

The first prototype of the DDS, the middle of 70's

Submarine class Agosta with DDS and typical SDV (highlighted for chopping). Note that swimmers had to exit the main gateway (also highlighted) and swim back in order to enter the DDS

Vostock and TSM have served side by side for many years. Meanwhile, the SDV technology developed and the device became obsolete. And now, the previous Vostock models have been replaced by the Vostock-NG.

In the end, the Vostock-NG vehicles were also outdated, the submarines of the Agosta class, which could transport it, were written off, and these possibilities gradually "disappeared". The current SDV unit is American-made Stidd-DPD.

The new SWUV project is much larger compared to the previous ones and significantly longer than the SDV Mk.VIII, which makes it too large for existing DDS docking stations: 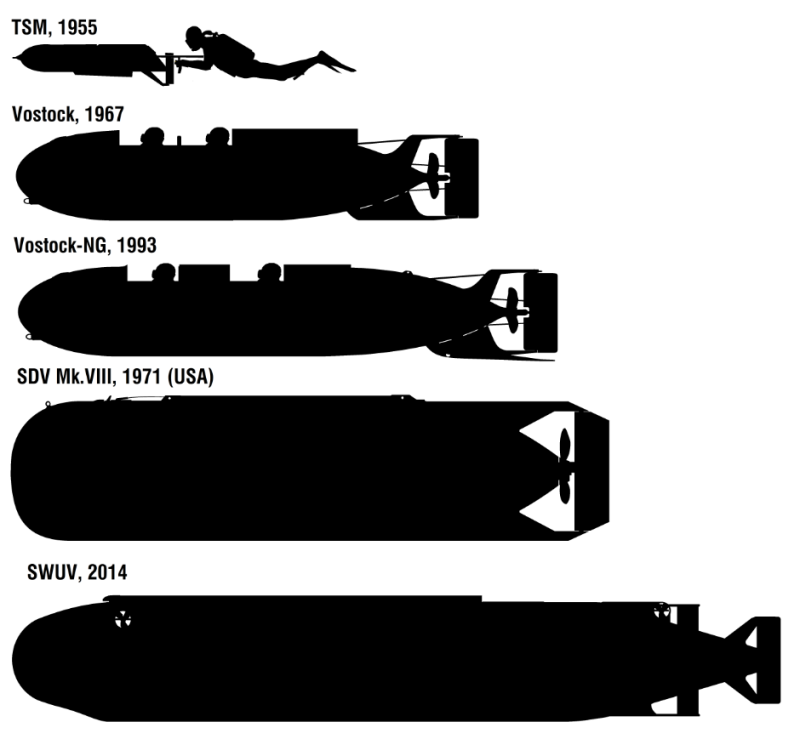 In order to meet the new requirements, several French companies have begun work on creating next-generation devices. The basic specification issued by him is quite understandable: a six-eight-position wet-type underwater vehicle with a sonar, resembling the American model SDV Mk.VIII. A total of three projects were presented, and all of them were strikingly similar to each other and the American apparatus Mk.VIII

Alcen Group is advertising its eight-person project. Mark the black hole on the side of the bow, which is a horizontal thruster, and the folding mast: 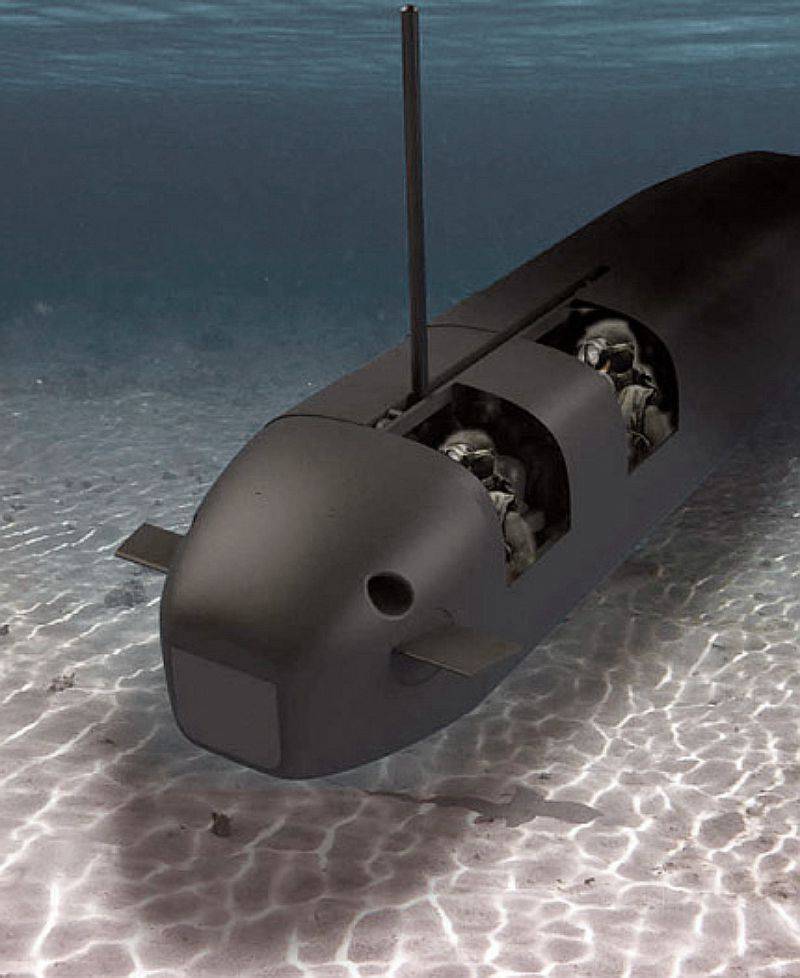 The shipbuilding company DCNS showed an export version of its submarine SMX-Ocean, which, in essence, is a diesel-electric version of the nuclear submarine Barracuda. Its operational flexibility is particularly noted, in particular, the presence of a docking station for working with underwater vehicles. Its SDV is also, by and large, similar to two other projects. Again, you can note the holes on the sides and top in the bow for thruster. 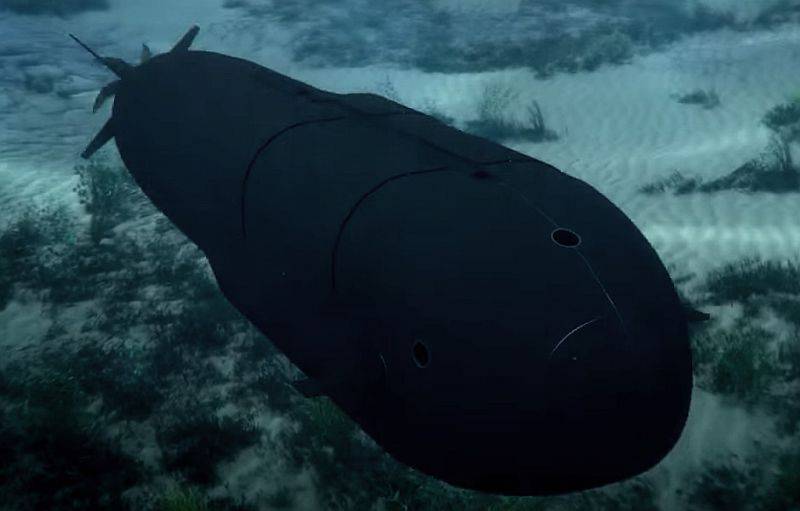 * Holes in the stern may indicate a diesel engine

You can also see the box below and behind the docking station on DCNS flyers. It can be used to store equipment and as a siding for swimmers: 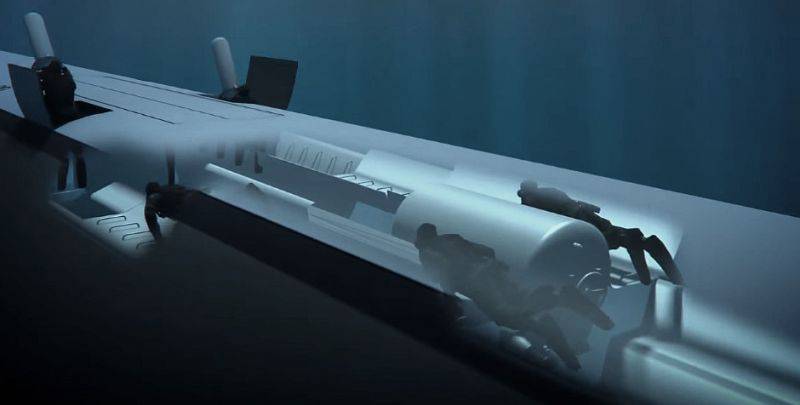 A promising device for the delivery of combat swimmers SWUV