Kyrgyzstan is facing a new revolution? 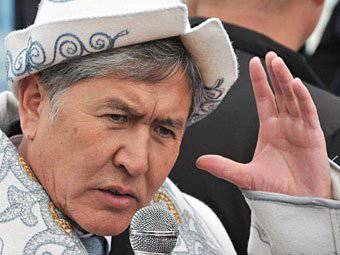 October 30 in Kyrgyzstan held presidential elections. As expected, the winner was the head of the Kyrgyz government, Almaz Atambayev, who received about 63% of the vote. Former Secretary of State Adakhan Madumarov and former head of the Emergencies Ministry Kamchibek Tashiev shared the second and third places among themselves, for which 14,7% and 14,3% of voters voted. In total, 16 people claimed the post of head of Kyrgyzstan.


According to the opposition, the elections were accompanied by numerous violations by the authorities. For example, many of the citizens who were going to vote did not find their names in the electoral lists. The main opponents of Atambayev, Kamchibek Tashiyev and Adakhan Madumarov, who enjoy support in the south of the state, have already reported that they do not recognize the defeats and demanded that the official election results be immediately reviewed. One of them even threatened that otherwise the authorities would be “punished” by the Kyrgyz people.

The current presidential election is the first since a coup d'état took place in the country, which the winners called the “revolution” (“The Great April Revolution”). Then the capital of Kyrgyzstan was captured by the rebels, and the legitimate president of the republic Kurmanbek Bakiyev fled from Bishkek, and then from the republic. Currently he is in political emigration in the Republic of Belarus.

After the “revolution”, a full-fledged president has not been in the country for quite a long time. First, a “provisional government” operated in Kyrgyzstan, which de facto appropriated the powers of the highest authority, and then a “provisional president” appeared - Roza Otunbayeva.

The head of the Kyrgyz opposition Ata-Zhurt party, Kamchybek Tashiev, made a statement saying that his party did not recognize the results of the presidential elections held in Kyrgyzstan, and called on the government to cancel them.

According to Tashiev, “hundreds of thousands” of various offenses took place during the elections. The chairman of the opposition party also called the elections held in Kyrgyzstan the most unfair in stories countries and added that if the central government does not cancel their results, it will "be severely punished" by the people.

In addition, the election of the Kyrgyz president was not held in accordance with international standards, Nursun Memekan, an observer from PACE, said earlier. In her opinion, during the voting, problems were discovered when compiling voter lists.

Even during the elections, six candidates, including Adakhan Madumarov, held an urgent press conference at which they accused Almaz Atambayev of using the administrative resource. But Atambayev’s headquarters retorted this accusation by saying that the Ata-Zhurt party of Kamchybek Tashiev is part of the ruling coalition, and this party also has its own administrative resource in the south.

There is an opinion that these elections can become a pretext for the final collapse of the country on a territorial basis - to the north and south, to cause a new social explosion, ethnic conflicts. The split is visible by voting: in the north, the majority voted for Atambayev, and in the south for Madumarov. Atambayev’s victory was predetermined by a higher activity in the voting of the northerners.

Interestingly, observers from the Russian Federation, former post-Soviet integration structures recognized the elections to meet international standards. And the observers from the OSCE, the PACE and representatives of a number of Western non-governmental organizations do not respond. Immediately it becomes very clear who in Kyrgyzstan needs peace, and who needs chaos and instability.

We are in Yandex Zen
Alexander Knyazev: Kyrgyzstan has already passed the “Afghanization” stage, Somalia’s prospects ahead
Vladimir Churov: On Observance of Citizens' Rights in the USA
4 comments
Information
Dear reader, to leave comments on the publication, you must to register.