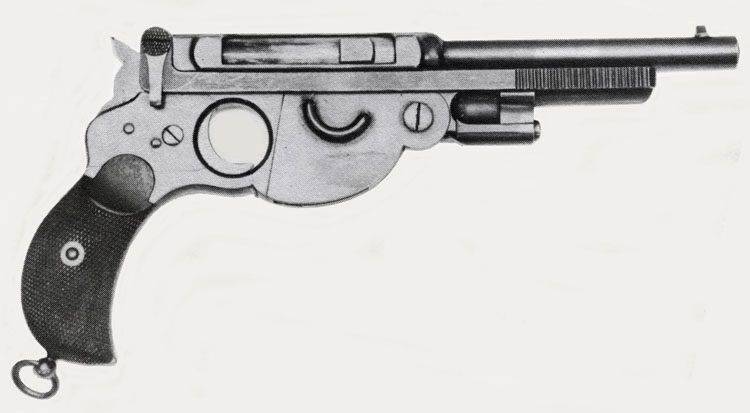 Theodor Bergmann (Theodor Bergmann) was born 21 in May 1850 into the family of an innkeeper and brewer in Spessartdorf. After graduating from a vocational school, at an early age he began working at a local manufacture for the production of plates and fell in love with the metalworking industry. Natural technical ability, diligence and entrepreneurial talent allowed him to quickly build a career. Bergmann made his way from the designer of the enterprise to the manager, co-owner, and later became the owner of a large metal-working enterprise. The company Bergmann produced household items, plates for kitchens, bicycles, pneumatic weapon and even the car "Orient Express".

As an entrepreneur and engineer, Theodor Bergmann constantly monitored new directions of technical progress that could bring profit to his enterprise. At the end of the 19 century, many gunsmiths began active development of automatic weapons, including self-loading pistols. Bergmann became interested in the idea of ​​setting up the production of such weapons. 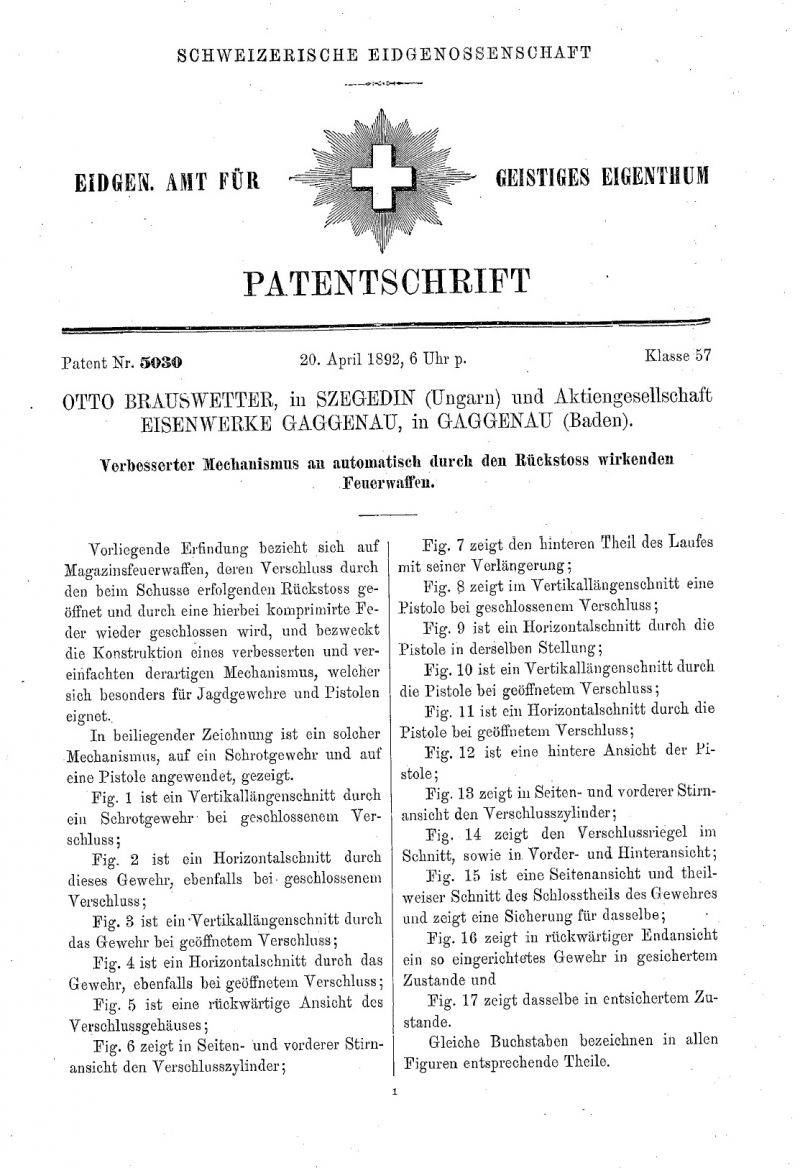 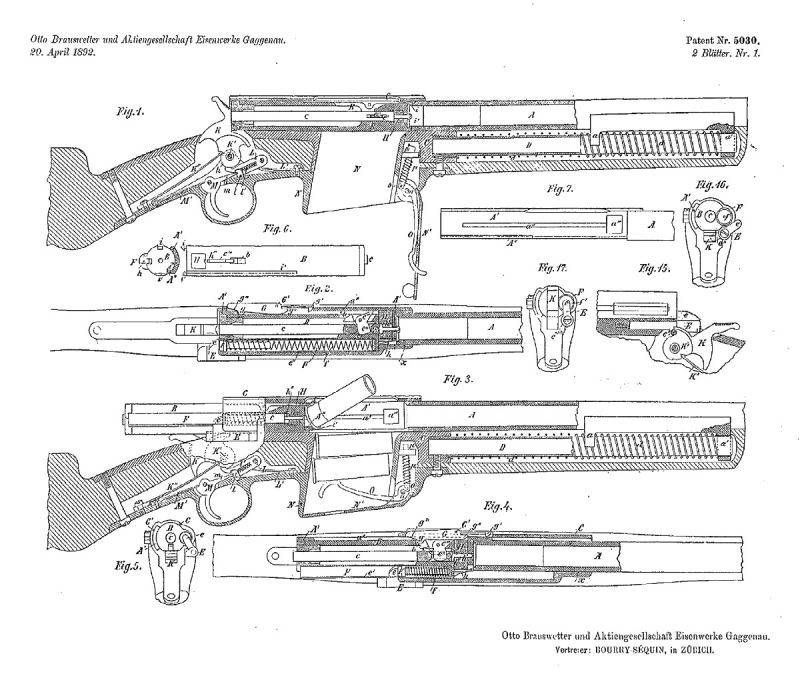 Many researchers have missed the fact that the patent described the construction of not only a pistol, but also a long-barreled self-loading magazine weapon. Here is one of the pages of the graphic part of patent 5030 No. 20 of April 1892. 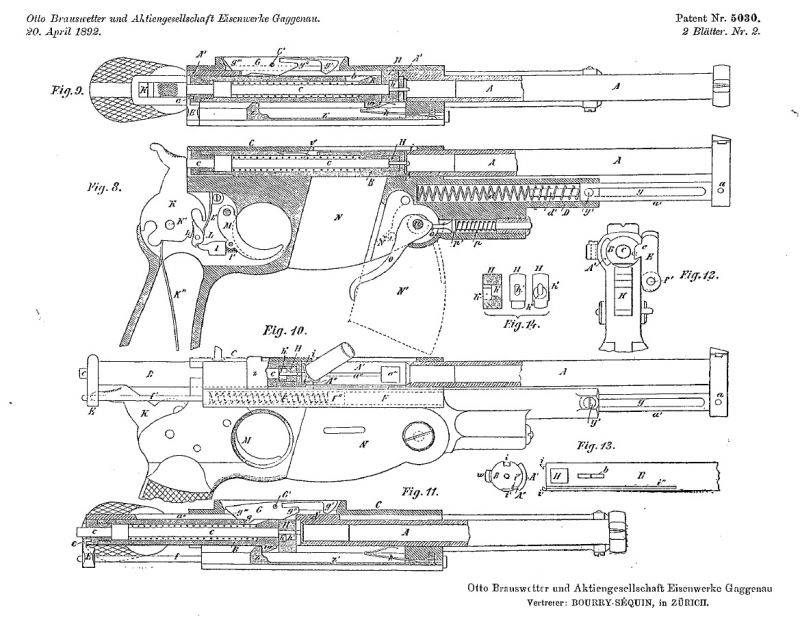 However, Bergmann, first of all, drew attention to the part of the patent describing the construction of a self-loading pistol. He considered it quite promising and acquired the rights to this patent. Around this time, Bergmann hires Louis Schmeisser as a designer, who gives great promise. It was thanks to Louis Schmeisser that Bergmann’s arms business was successfully and rapidly developing. 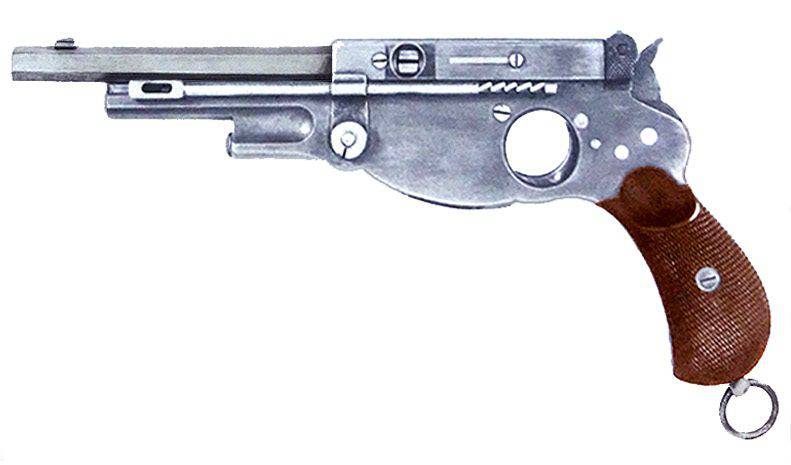 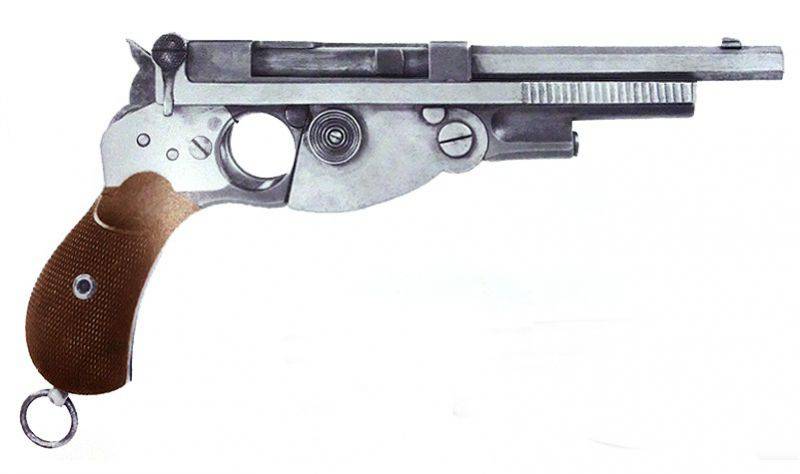 The trigger mechanism of a single action pistol with an open trigger. The cartridges were placed in front of the trigger guard in a special store with a side opening lid. The button for opening the store and the lid itself were located on the right side of the frame. The gun used cartridges caliber 7,5 mm from the Swiss revolver M1882. 5 magazine capacity. The total length of the gun 280 mm, barrel length 135 mm, weight 980 grams. 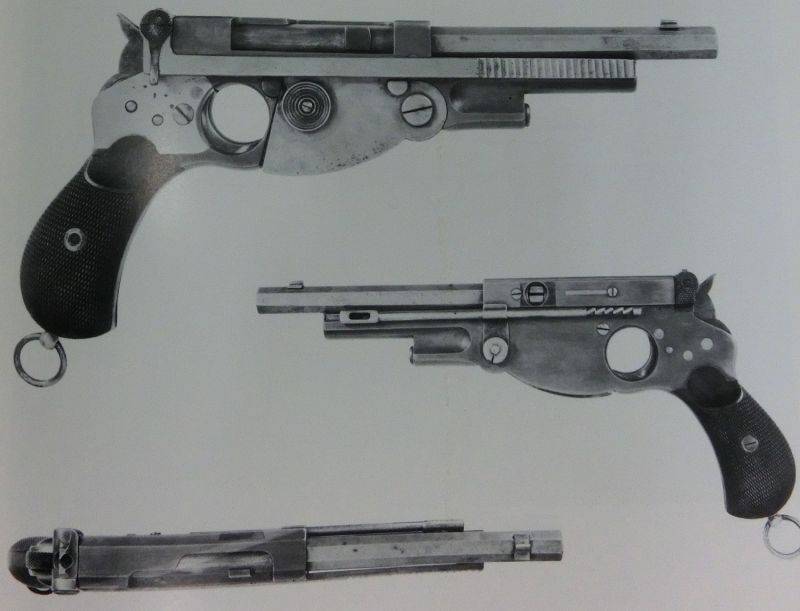 In 1993, the gun was tested in the Swiss Army. The results of the army tests were unsatisfactory. There were delays and distortions when shooting, the automation worked unstably. The gun model 1893, and has remained an experimental model. Despite the first setbacks, Theodor Bergmann did not abandon the idea of ​​creating a pistol and Louis Schmeiser continued to work on the design of the weapon. The basic technical concept of building pistols by Bergmann and the distinctive recognizable appearance came from the 1893 model of the year. Unfortunately, the guns of the 1893 model of the year were probably not preserved, since neither the literature nor the weapon auction sites could find pictures of these weapons. 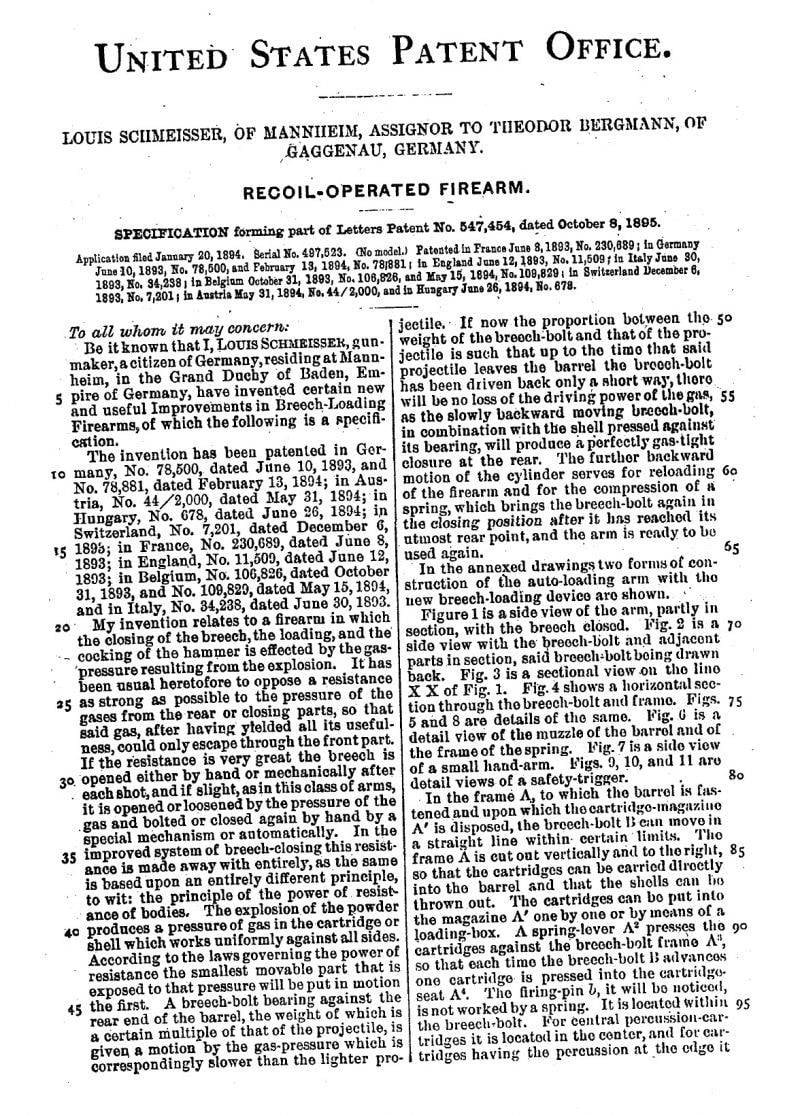 Having taken into account the main drawbacks of the 1893 model pistol of the year, Louis Schmeiser set about modernizing the weapon. He received several patents for gun improvements, including the German patent 1893 of the year and the American patent number 547,454 of October 8 of 1895. Firstly, Schmeiser abandoned the unreliable locking system of the semi-free shutter and applied simple automation using the recoil of the free shutter. This led not only to an increase in the reliability of the weapon, but also to a decrease in the complexity of the pistol and the cost of its manufacture. 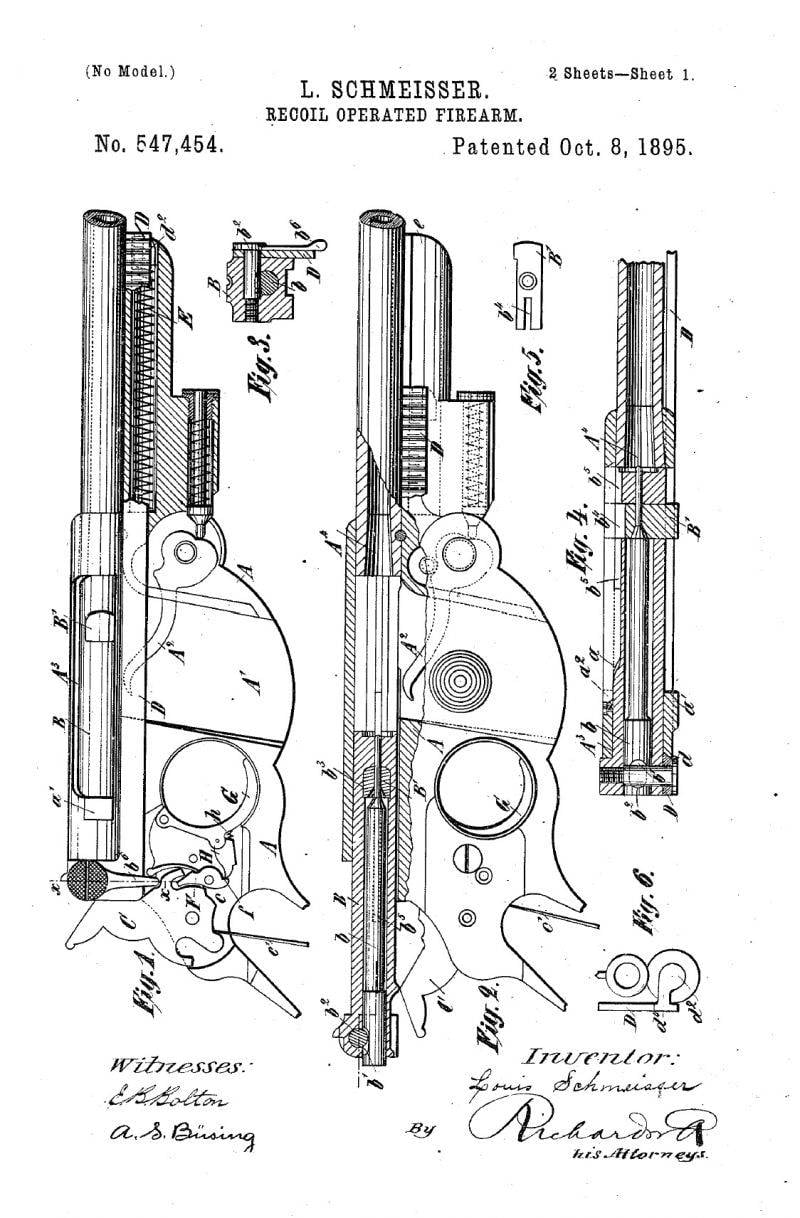 The gun was named Bergmann model No. XXUMX or Bergmann No. XXUMX (Bergmann No. XXUMX, model 1). Starting with this model, Bergmann uses sequence numbers in the marking of his subsequent pistols. One of the main distinguishing features of the 1 model gun of the year is the location of the return spring under the barrel. This spring is shown on the graphic part of the patent. 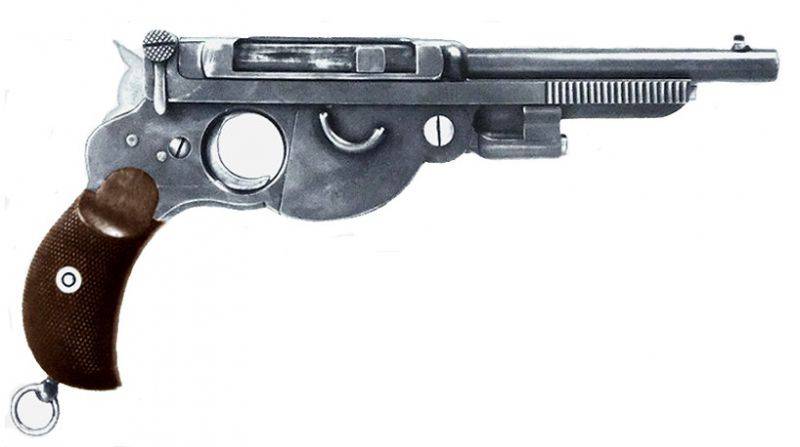 Another characteristic feature of the Bergmann pistol No.1 is the absence of an extractor, which also substantially simplified the design of the pistol. Bergmann №1 is a rare example of a self-loading weapon, in which the extraction mechanism works only due to the pressure of powder gases on the bottom of the liner. The removed sleeve hits the reflector's tooth and flies out of the frame of the gun. 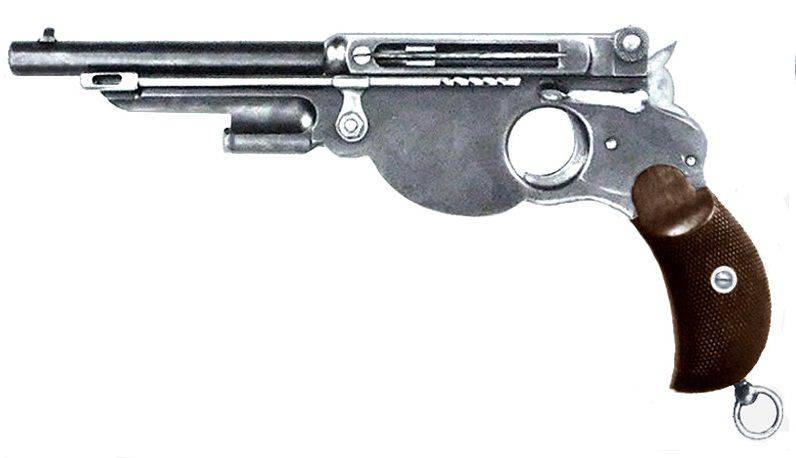 On the left side of the frame was also placed a ramrod, which, if absolutely necessary, could be used for extracting sleeves or cartridges from the barrel chamber. 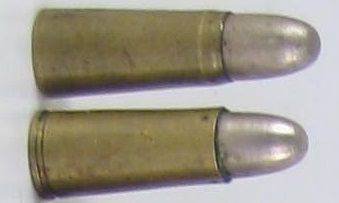 The absence of an extraction mechanism from the early Bergman pistols led to the creation of cartridges with a conical sleeve, which had neither groove nor edge. The photograph shows the early-release 5 mm ammunition Bergmann without flange and groove (top) and later release (bottom). The use of a free gate forced to look for a weaker cartridge, to ensure the reliability of the mechanisms of weapons. Creating a gun without an extractor, in order to reduce friction when removing the liner, it was necessary to make a sleeve of a conical shape. 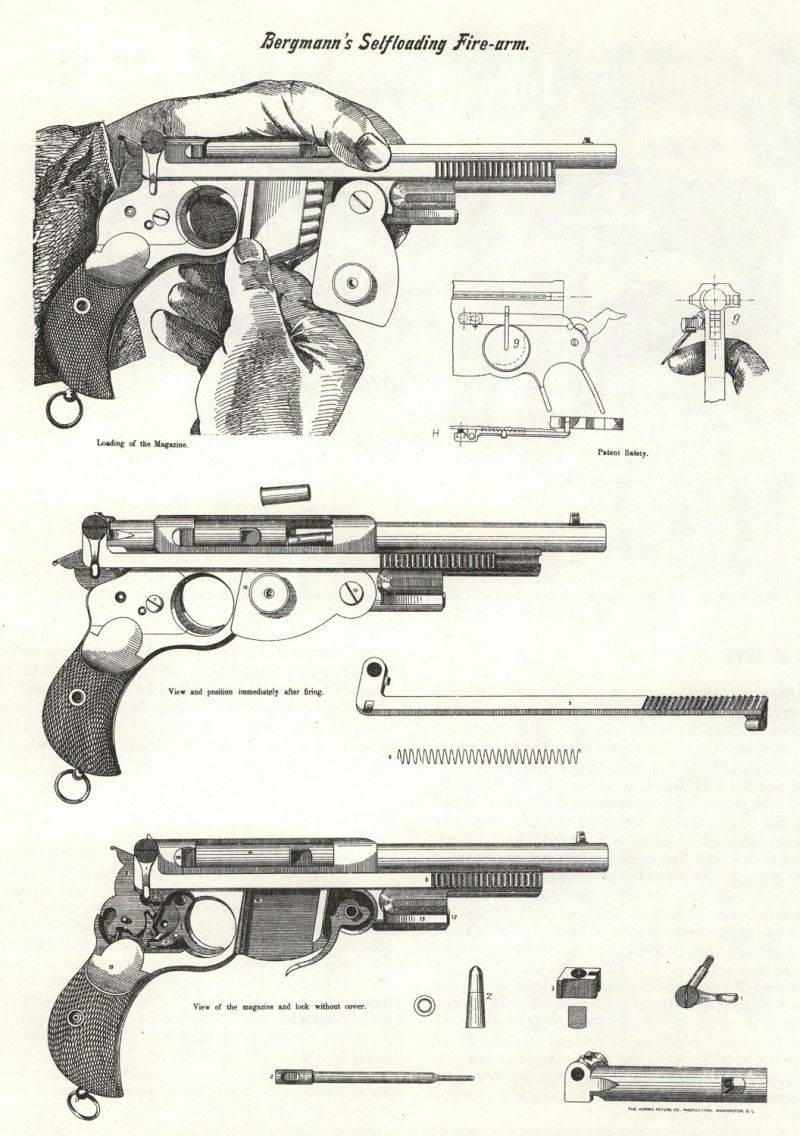 The power supply of the Bergman pistol No.1, like its predecessor, was carried out by cartridges from a fixed box-case store loading, located in front of the trigger. To load the pistol, the magazine cover was folded down and a five-cartridge cartridge was installed in the groove in the frame (into the magazine), after which the cover was returned to its original position. 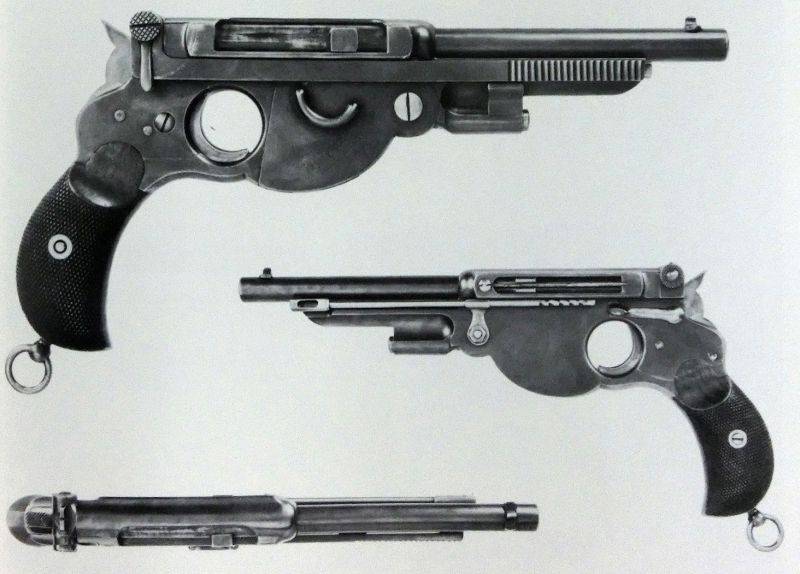 Theodore Bergmann did not leave attempts to get a military order and his gun model 1894 of the year (Bergmann №1 / 1894) was also sent for tests to the Swiss army. The caliber of a military pistol 7,5 mm, its total length was 280 mm, barrel length 136 mm, weight 1030 grams. 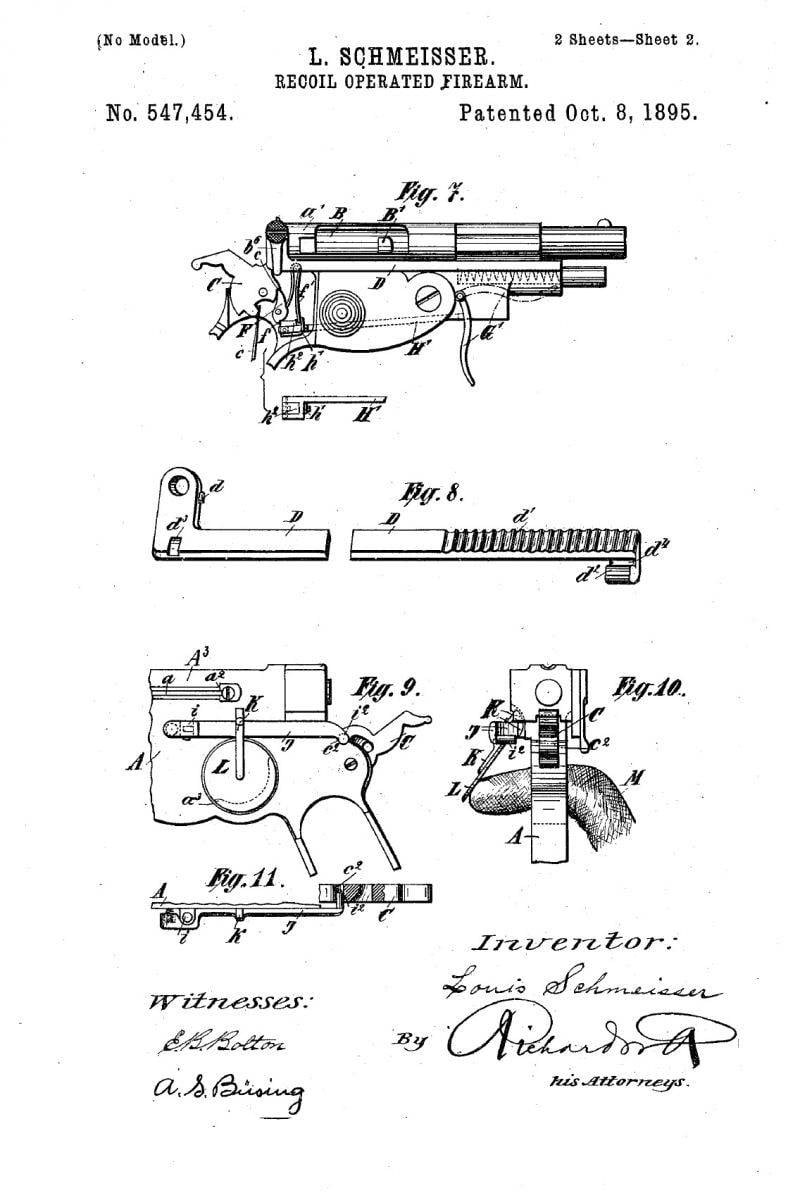 The graphic part of patent No. 547,454 from October 08 of 1895 of the year also shows the construction of a compact pistol without a trigger guard and with a folding trigger. Researchers say that starting from the first model of the pistol, Bergmann and Schmeiser, in addition to the 7,5 mm caliber revolver cartridge, use cartridges of their 5 mm caliber Bergmann, 6,5 mm Bergmann and Bergmann 8 mm. 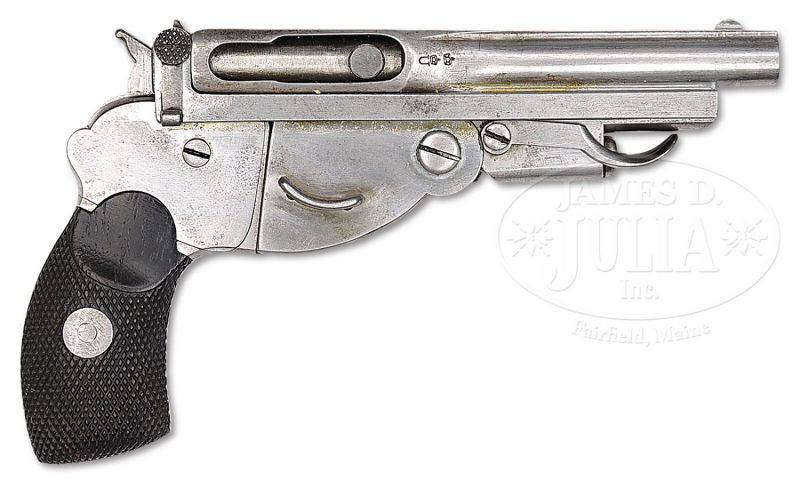 The significant difference in size between military pistols and pocket 5 mm pistols shows that Bergman was interested in receiving not only military orders, but also the promotion of his weapons in the civilian arms market. A pocket pistol store was placed immediately after the handle, and a folding trigger moved forward in front of the store. 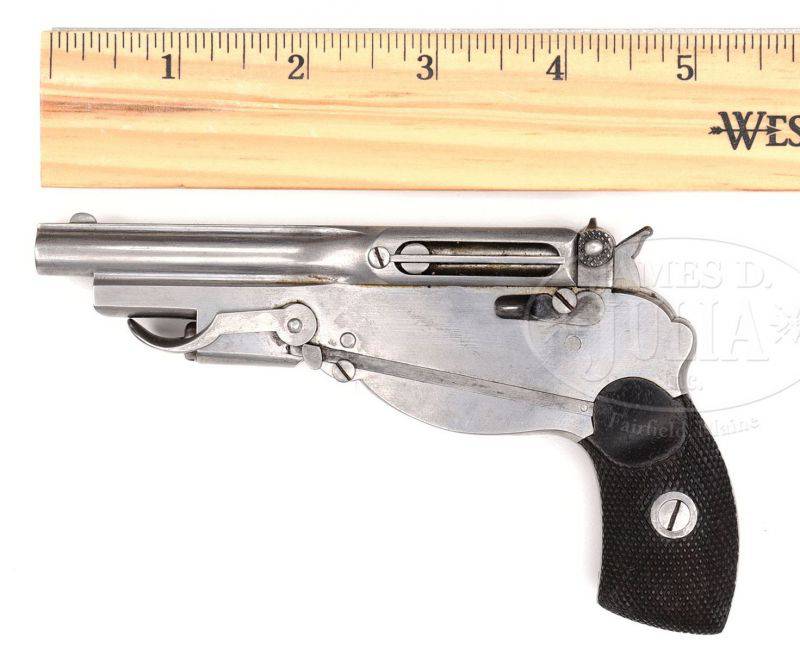 The sights of the Bergmann pistol, the 1894 model, are simple and consist of a fixed semi-circular front sight and a slotted rear sight.

The number of issued pistols Bergmann №1 both military and civilian options remained extremely small. Given their small serial numbers, it can be assumed that no more than a hundred of them were released. Some researchers have suggested that the 1894 model of the year was merely an experimental model.