October 31 2011
10
Not so long ago in Norway, in one of the gods forgotten places, on the Spitsbergen archipelago, the world's largest granary was discovered. This granary, informally called the Doomsday Storehouse, is located near the small village of Longyearbyen, 1100 km from the North Pole. The repository is built in a rock at an altitude of 130 meters above sea level. Construction of the facility began in the middle of 2006, and already in February 2008, the repository was officially opened. The Doomsday Granary is designed to save the seeds of the most important plants from around the world from possible catastrophes, such as nuclear war, rising sea levels, the fall of an asteroid. The full official name of this project is Svalbard International Seed Vault.


The Doomsday repository was built with funds from the Rockefeller, Bill Gates and several other global financial giants, and Norway was the initiator of the creation. The cost of the project was about 9,6 million dollars, which is not so much for today. At the same time, the depot, recessed to 120 meters into the rock, has double doors with anti-explosion protection, two hermetic vestibules with airlock chambers, motion sensors and reinforced concrete walls 1-meter thick that can withstand a nuclear warhead or earthquake.

Inside the store, the temperature is kept constant at –18 degrees Celsius, and the seeds are kept wrapped in aluminum foil. In the event that refrigeration units that are capable of operating on local coal also fail, the indoor temperature with the seeds will not rise above -3 degrees Celsius, since the storage is located in northern latitudes, just 1000 kilometers from the North Pole. The granary is able to accommodate around 4,5 million species of seeds of terrestrial plants, and there will be enough seed reserves to fully restore one endangered or extinct species. 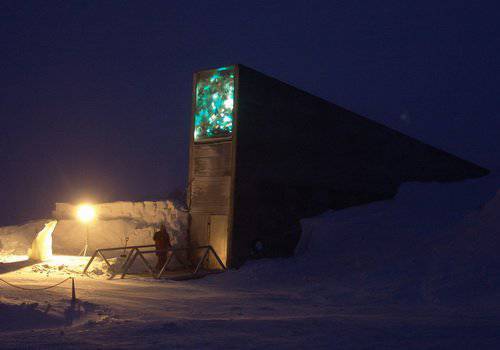 The designers of the Doomsday repository looked into the distant future and modeled the planet’s climate change 200 years ahead. They chose such a land area on the Spitsbergen archipelago, which even in the case of melting ice caps at the North and South Poles will be above sea level. Also, this area is characterized by very low tectonic activity. Preservation will be facilitated by the remoteness of the object from a large civilization, and the permafrost will help preserve the collected material even in case of failure of refrigeration equipment. Currently, the repository already contains about 500 000 plant seed samples from around the world. By the time the store is completely full, it will become the largest genetic seed bank in the world.

In total, according to the UN, there are about 1 400 plant seed banks in the world, the largest of which are located in the USA, China, Russia, Japan, India, South Korea, Germany and Canada (as they decrease). All of them contain about 6,5 million species of seeds (of which only 1,5 million are unique). At the same time, the repository on the Svalbard archipelago is intended for the entire world community. The diversity of the Earth’s flora, stored in the repository, will become the property of future generations, regardless of any emergencies and weather.

Today, the preservation of plant genetic diversity has a huge role for food production for future generations of earthlings and is a significant contribution to the fight against poverty and hunger in developing countries. The origin of most of the plants is associated with developing countries, and it is the developing countries that have a rather urgent need for the further development of agriculture and ensuring food security. 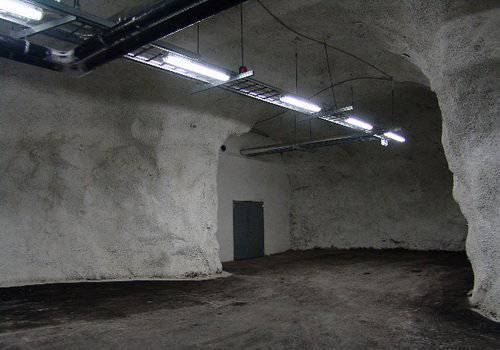 The global granary, built in the thickness of the rock in permafrost on the island of Svalbard (the Norwegian name of Spitsbergen), aims to store duplicates of different varieties of seeds from genetic seed banks scattered around the world. Today, many of these banks are located in developing countries. In the event that as a result of wars, natural disasters, or simply lack of funds, these seeds are lost, the unique collection will be restored with the help of seeds stored in the global granary.

Today, the loss of species biological diversity is one of the main threats to sustainable development and the environment. The variety of plants used for food production is under constant pressure. Due to the loss of this diversity, an irreparable loss of our capabilities aimed at food production, cultivation of plants that will be adapted to new plant diseases, climatic changes, and the needs of a growing population may occur.

This official announcement is located on the website of the Ministry of Agriculture and Food of Norway.

Facts about the Doomsday Vault

The Doomsday repository on the Svalbard archipelago is not a genetic bank - it is a guarantee repository. Here, on behalf of various genetic banks, duplicate seeds of different varieties are stored. Duplicates can only be taken from here if the seeds stored in the original funds are lost for any reason. The party that deposited the seeds retains ownership of them. Neither the Norwegian authorities nor the global granary on Svalbard will have the right to admit anyone to the vault funds without the permission of the depositing party. The main users of the repository will be breeders and scientists. 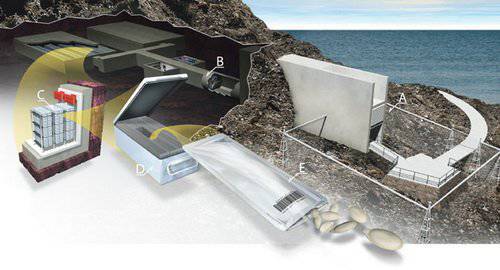 The granary at Svalbard is designed to store 4,5 million of different types of seeds, with each type being represented by a sample of 500 seeds. Thus, the maximum capacity of the granary will be 2,25 billion individual seeds. This granary will be able to accommodate all the unique types of seeds stored in genetic banks around the world, as well as samples of new seeds that will be created in the future. Once completed, it will become the largest global seed fund.

Storage priority is given to the seeds of plants that are used by mankind for the manufacture of food and sustainable agriculture. This is of particular importance for developing countries in which food safety is an important national task. If you look at this problem in historical In retrospect, we will see that more than 7 plant species were included in the human diet as important components of its nutrition. In modern agriculture, only 000 species are used, and only 150 species of plants act as the main source of plant foods used today. In this case, only rice varieties in the world, there are about 12 thousand.

In the granary, the seeds will be stored at a constant temperature of -18 degrees Celsius, packed in sealed bags and folded in special sealed boxes. Seeds will be placed on special racks located inside the vault. The limited access of oxygen and low temperature slow down the metabolism and aging of plant seeds. In turn, the permafrost is a guarantee that the seeds will be able to maintain their germination even if the power supply system of the storage facility fails.

Svalbard is a unique place in many ways. Geological and climatic conditions are ideal for such an underground cold storage. Permafrost is able to guarantee that the temperature inside will never rise above -3 degrees Celsius. The natural sandstone of the island is characterized by a low radiation background and stable structure. In terms of placement, this granary surpasses all the genetic banks of the world. In addition, there is a well-developed infrastructure, a reliable power supply system and regular flights to the mainland. In the foreseeable future, even the melting of permafrost will not harm the repository. 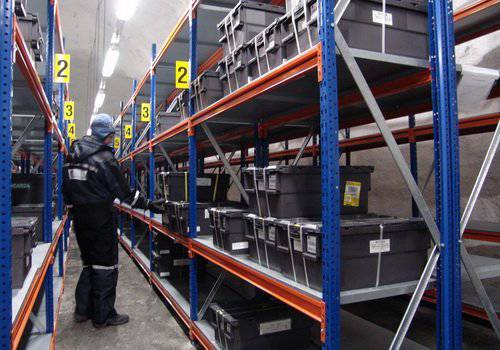 The need for the preservation of such a large variety of seeds is that different plant varieties have different properties that are not always possible to see the usual look. This, first of all, is about genetically determined abilities to adapt to different soil and climate, resistance to diseases, differences in nutritional properties and taste. If in the future we need to use properties that were inherent in one or another unique plant, we will need assurances that this plant will still be found.

The shelf life of seeds depends on the particular variety. For example, pea seeds are able to maintain their germination only for 20-30 years, while, for example, seeds of certain types of grain and sunflower are able to survive for many decades and even centuries. However, they all gradually lose their germination and die. In order to prevent this, some of the seeds will be taken from specially stored samples and planted in the soil. So they germinate and give the necessary seeds again, which will be placed in the place of the old ones. Observing this cycle, they can be stored almost forever.

We are in Yandex Zen
Vault 404: Ukraine in anticipation of a technogenic apocalypse
List of destroyed the largest and most high-tech enterprises
10 comments
Information
Dear reader, to leave comments on the publication, you must to register.