Self-defense with a knife: the main aspects of the use of a heavy knife. Cold weapons from the point of view of the law 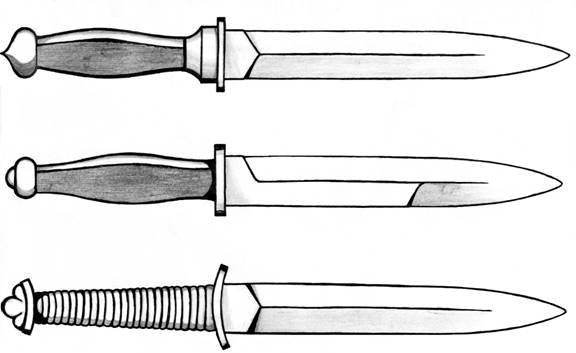 
Heavy knives are weaponwhich may be handy in a rare case, but still there is such a probability. A heavy knife means long and heavy hunting knives, combat knives, kitchen chopping knives are close to this group, and you can add machete knives to it. This knife is able to cut the chicken in half with one blow with one blow.

It is clear that on the street such a knife may not be at hand, but it can be at home, in an apartment, on a camping trip, and on any trip to nature.

The rules for its use are basically the same as with a light knife: we must remember that this is the last line of defense, apply only in case of emergency, when your life or the lives of your loved ones are at risk. You can not intimidate the enemy with a knife, almost always the threat of a knife will be perceived as a signal to start the fight.

Using. This is basically a chopping weapon, you can cut an enemy with a heavy knife or, along with a cut, break a bone. In many ways, its use is similar to the use of an ax, if you chopped wood, trees, branches, etc., you can also "cut down" the enemy. A skilled fighter can also use it for strikes of “brass type” - the knife is heavy, and with its handle you can inflict serious damage.

Protection from punches and kicks. When an opponent attempts to kick you, take a step back and strike at the swing with a swing. If the strike is successful, the enemy will be no longer up to you. To repel punches, you need to chop the hands and forearms.

Blows to arms, shoulders, neck, head. By hitting the opponent’s arm with a heavy knife (perhaps it will be with a weapon), you have good chances of hurting a limb or breaking it. This fact already inclines the outcome of the fight in your favor. Further depends on the nature of the battle, if there is no need to kill the enemy, you can leave the battlefield. In a more serious fight, successfully attacking a limb, you can continue and strike at the shoulder, neck or head. So, the outcome of the battle can decide a blow to the clavicle. The blows to the neck, head, especially with a heavy knife, are justified only in the case when you or you are killed (badly wounded). So, having damaged the carotid artery, you will surely kill a person, only immediate medical assistance will save him.

Cold weapons from the point of view of the law

What is a "cold weapon" in terms of the legislation of the Russian Federation? What knives can get a simple citizen of Russia? What is the responsibility of the laws of Russia for the illegal carrying of weapons, recognized cold?

According to the “Weapons Act” of November 13, 1996, cold weapons are weapons that are designed to hit a target with the help of a person’s muscular strength in direct contact with the target (Article 1 of the Weapons Act). Cold weapons include sabers, swords, daggers, knives, Finnish knives, dirks, stilettos, brass knuckles and other items that are specifically designed or adapted to hit a living target. Melee weapons may be piercing, piercing, slashing, crushing, etc.

Cold arms do not include products that are certified as household, household or industrial products (such as penknives, kitchen knives, shoemakers, garden knives, fish knives, etc.) Although they are structurally similar to weapons (also Art. 1). In a particular case (in the course of the investigation), the problem of recognizing an object as a cold weapon is solved with the help of a forensic examination.

What cold weapons are entitled to have Russian citizens. Citizens of the Russian Federation who have permission to store and carry hunting firearms, automatically receive the right to purchase hunting cold bladed weapons (article 13 of the above-mentioned law). When purchasing cold weapons in a hunting (hunting membership) ticket of a citizen of Russia, the seller makes an entry. And permission to carry this weapon is permission to carry firearms.

Some citizens of the Russian Federation also have the right to purchase cold bladed weapons, which are intended to be worn with the Cossack uniform, as well as with the national costumes of the peoples of Russia - these are checkers, sabers, daggers and knives (Art. 3). Therefore, if you sign up for the Cossacks or you are a representative of the people who have cold weapons - this is part of the national costume, then the checkers you found, the daggers, etc., should not cause any complaints to you (apparently, it’s time for the Russians to prove the knife is part of our national costume, as it was about a century ago). The specificity of national costumes is determined by the Government of Russia. The storage and carrying of such cold arms requires a license (Art. 13 of the Law on Weapons).

Thus, if a citizen of Russia is not a hunter, a Cossack, or a representative of a people whose dagger and a saber are part of a national costume, he cannot have and carry any cold arms.

What cold weapons is prohibited. On Russian territory, the law prohibits trafficking as a civilian or service weapon of brass knuckles, tassels, shurikens (these are Japanese concealment weapons of concealed carrying, such as needles, asterisks, etc., of similar objects), Article 6 of the Law “On Weapons”. According to the same article, the circulation of cold bladed weapons and knives, in which blades and blades longer than 90 mm are forbidden, is prohibited on the territory of Russia. As well as weapons and knives, the blades of which are automatically advanced by pressing a button, a lever, etc., and are fixed by them; knives and weapons, in which the blade is advanced by gravity or accelerated movement, plus automatically fixed.

Responsibility of Russian citizens for illegal possession or carrying cold weapons. Before the advent of 8 in December 2003 of the Federal Law of the Russian Federation N 162-FZ, illegal possession of cold weapons was subject to criminal liability under Article 222 Part 4 of the Criminal Code of Russia (for carrying cold weapons could be obtained up to 2 years, plus a fine). Currently, it is only possible to bring to administrative responsibility for wearing and violating the rules of keeping cold weapons in accordance with Part X of Art. 2 of the RF Code of Administrative Offenses (CAO). Responsibility is to pay a fine in the amount of 20.8 to 500 rubles. And it is possible that a weapon should be withdrawn. This means that the cold arms will be withdrawn from the citizen and sold in the prescribed manner by the internal affairs bodies, and the proceeds, minus the costs of sale, will be returned to the former owner of the weapon.

Amendments to the legislation on carrying cold weapons. Currently, part of the 4, Art. 222, of the Criminal Code of Russia establishes criminal responsibility only for the illegal sale of cold weapons (mandatory work for 180-240 hours, or correctional work for 1-2 of the year, or arrest for 3-6 months, or imprisonment to 2 years with a fine of 80 thousand rubles). In addition, there is criminal liability for the illegal manufacture of cold arms (including throwing) - h. 4, Art. 223 of the Criminal Code of Russia.
Russian combat knife. Andrey Kochergin

Andrei Kochergin - head of the center of applied research, master of sports of the USSR, master of sports of Russia on pistol shooting Makarova, international instructor in applied hand-to-hand combat, Sihan 5 –d military karate "Koi no takinobori ryu" ("Koi No Takinobori Ryu"). Country Russia. Genre: Tutorial. Moscow seminar 2004 of the year. The film tells about new teaching materials in training and the use of a combat knife. The main strategic idea of ​​these developments was to increase the effectiveness of actions in real combat, due to the correctly chosen tactics of the power method of striking and tough attitude towards the enemy.

We are in Yandex Zen
My humble experience (survival instruction)
Self-defense with a knife: the basic rules for the use of a light knife
13 comments
Information
Dear reader, to leave comments on the publication, you must to register.