August 12 2015
4
Already by the beginning of 1941, the Italian army suffered significant losses in North Africa. During the battles with the enemy, a large number of vehicles of various classes were lost, which led to the need for the urgent construction of new machines that were to be fought in the near future. By mobilizing industry, it was possible to partially solve the problem of shortage of equipment. Thus, the companies Ansaldo and Lancia were ordered to develop a promising armored car, later to receive the designation Lince.


In 1941, the Italian Defense Ministry initiated the development of several types of new armored vehicles, to which all major military enterprises were involved. Among others, Lancia and Ansaldo received orders. The first was to quickly create a new chassis, which was planned to be used as the basis for a promising armored car. Specialists of Ansaldo, in turn, had to build an armored car on the basis of the new chassis.

The company "Lancia", according to the technical requirements, was to create and submit a four-wheel drive four-wheel chassis with a gasoline engine. For use as a base for an armored car, such a machine had to have a loading capacity of several tons, as well as high mobility and terrain characteristics. For example, it was required to equip the chassis with an independent suspension, providing the ability to move over rough terrain. 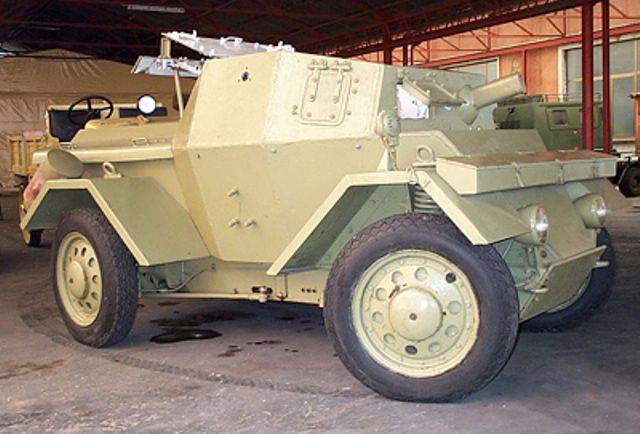 Due to various technical, technological and organizational reasons, the development of the chassis has been delayed. Because of this, the construction of a prototype of a new armored car was started only at the end of the summer (according to other data, at the beginning of autumn) 1942 of the year. However, the engineers at Lancia coped with their task. Tests of the chassis and the experienced armored car showed that the presented development fully complies with the requirements and can be used as a basis for armored vehicles.

The armored corps, weapons and instrument equipment of the new armored car, named Lince (“Lynx”), was created by Ansaldo. Probably due to delays in the development of the chassis in the new project, an original and non-standard approach was used. In the creation of armored cars of the time, there was a kind of "tradition": the designers took the finished chassis and installed a new original armored hull on it. In the case of "Trot" did the opposite. The chassis was designed from scratch, and the body was a modified version of the existing design.

During the fighting in North Africa, the Italian military managed to seize a number of enemy armored vehicles. Among these trophies was the British armored car Daimler Scout Car (Daimler Dingo), which was carefully studied and checked on the Italian test sites. Based on the results of this study, it was decided to use British developments in the new project. Because of this, the body of the armored car Lince was actually a slightly revised unit of the British Dingo. In this case, the design of the hull made some changes related to the characteristics of the used chassis and the available technologies. Copying the design of the armored hull made it possible to speed up the development and at the same time ensure relatively high protection performance. 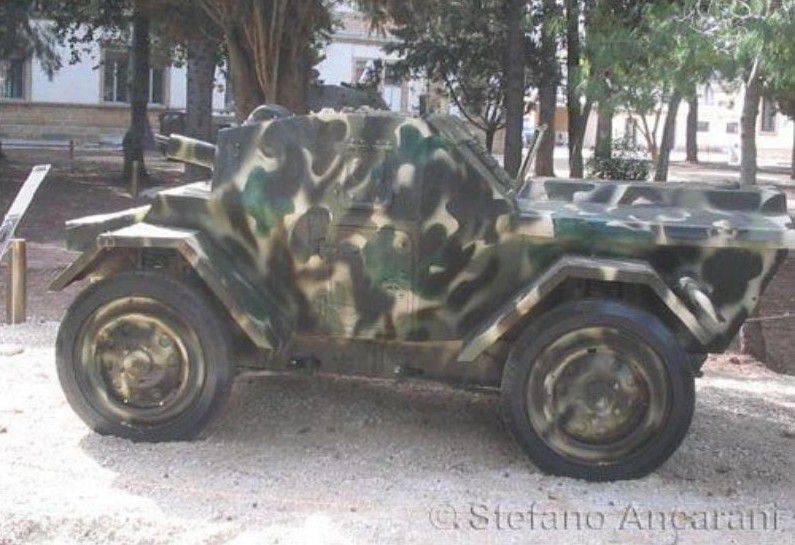 The basis for the Lince armored car was the original chassis with the wheel formula 4x4 and independent spring suspension on all wheels. At the rear of the frame was mounted gasoline engine with power 60 hp A mechanical transmission was connected to the engine, transmitting torque to all four driving wheels. The new chassis did not differ in high performance, but by reducing the size and combat weight of the armored car it was possible to ensure good performance indicators of speed and maneuverability.

The “Lynx” armored car received an armored hull, which was a slightly reworked version of the protection of the British machine Daimler Dingo. When developing both machines, it was planned to reduce to the required minimum the dimensions and weight of the structure. At the same time, however, managed to provide effective bulletproof protection. The body was assembled on the basis of a metal frame. The frontal parts had a thickness of 14 mm, the rest of the body was assembled from 8,5-mm sheets. The Dingo trophy machine had a welded body, but Italian specialists had to use riveted joints.

To ensure the most dense layout of internal volumes, the body had a specific shape. Thus, it was proposed to assemble the frontal part of the hull from several sheets forming a characteristic angular box. The lower and middle frontal parts were located at an angle to each other and to the vertical. The upper frontal part was mounted strictly horizontally. Inside the front of the case, the driver’s pedals and some of the steering gear parts were located. 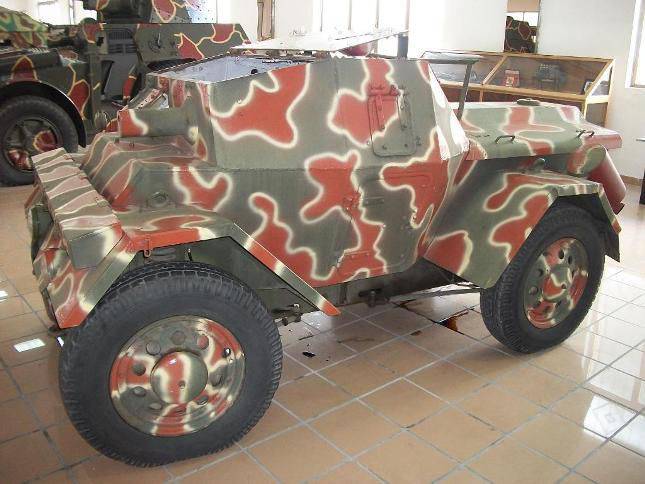 With a horizontal frontal part, a vertical sheet was mated with a driver's access hatch and a ball mount for a machine gun. In a combat situation, the hatch was closed with an armored locker with a slit. The control panel was carried out from inside the case. The main body of the fighting compartment of the vehicle had an octagonal structure in the plan. It was proposed to collect from several trapezoid bronelistov installed at different angles to each other. In this case, the lower sheets were mounted with the collapse outward, and the top were tilted inward. The roof of the fighting compartment was made of several sheets, one of which could lean back and served as a hatch.

The chassis frame did not have a separate reservation. Above all the wheels were provided large wings, partially protecting them from shelling. On the front sheet of the case was attached oblong box for the transport of property. On the rear surface of the rear wings placed two engine muffler. To facilitate the loading of armored cars onto railway platforms or transport ships on wings, rings for crane hooks were provided. 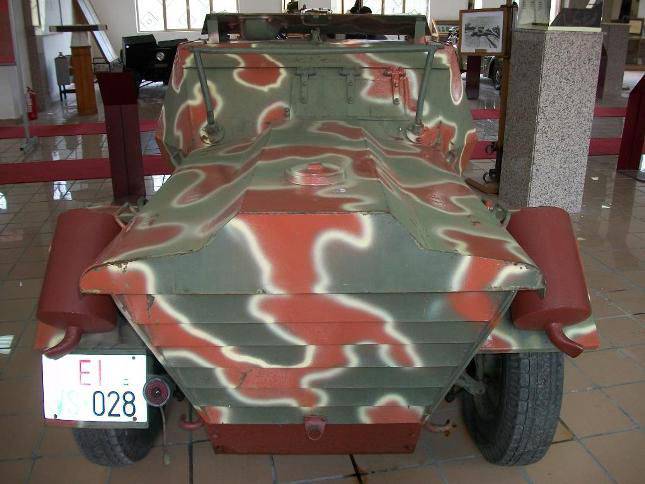 The crew of the armored car Lancia Lince consisted of only two people, located in the total habitable volume. To the right of the axis of the car was the driver's seat and control post. Due to the tight layout of the units, the driver’s workplace was quite close. Thus, the steering axle was directly below the horizontal frontal part, because of which he blocked part of the inspection hatch. It was suggested to follow the road through the inspection hatch in the front hull sheet or through a slot in its lid. To improve visibility in a camping environment, one could open a small square hatch in the right cheekbone of the hull. There was a similar hatch on the left side. The driver's workplace had one interesting feature: the seat back was mounted on the front wall of the fuel tank, located inside the crew compartment.

The commander, who served as the shooter, was located to the left of the driver. At his disposal was a machine gun Breda Mod.38 8 caliber mm. The machine gun was mounted in a spherical installation of the front sheet and allowed to fire within a relatively small sector. If necessary weapon could be removed from this installation and used as a wearable light machine gun.

Get into the car followed through a large hatch in the roof of the crew compartment. In addition, in the sides of the hull there were relatively small hatches used in the maintenance of the machine. In the upper stern of the fighting compartment provided a wide hatch for observation or for firing. 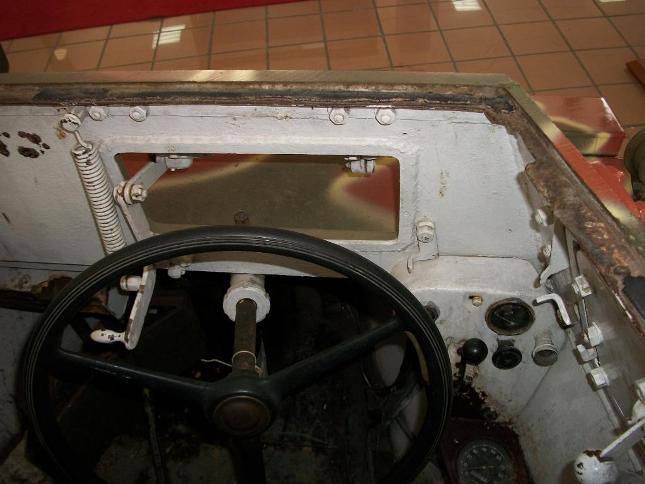 Due to the most dense layout of the units and the borrowing of British ideas, Italian experts were able to create a fairly lightweight and compact armored car. The “Lynx” length did not exceed 3,2 m, the width was 1,75 m. The height on the roof of the hull was only 1,65 m. per ton.

Due to some difficulties in building an experienced chassis, the assembly of the prototype armored car Lancia Lince was delayed. The first model of an armored car was built only in November 1942 of the year, and soon it was presented to the customer. During the tests, the experimental machine showed good performance. High power density allowed to accelerate on the highway to 85 km / h, and the fuel tank was enough for 350 km of the way.

Used armor defended the crew and internal units of the machine from small arms bullets and artillery shell fragments. At the same time, the armored car had insufficient armament. The presence of only one machine gun rifle caliber did not provide acceptable firepower and combat effectiveness. However, reinforcement of armaments was impossible due to the limitations imposed by the hull structure. The installation of a more powerful machine gun required serious reworking of the frontal part of the hull, and the option to modernize the armored car by installing a turret with weapons was completely excluded. 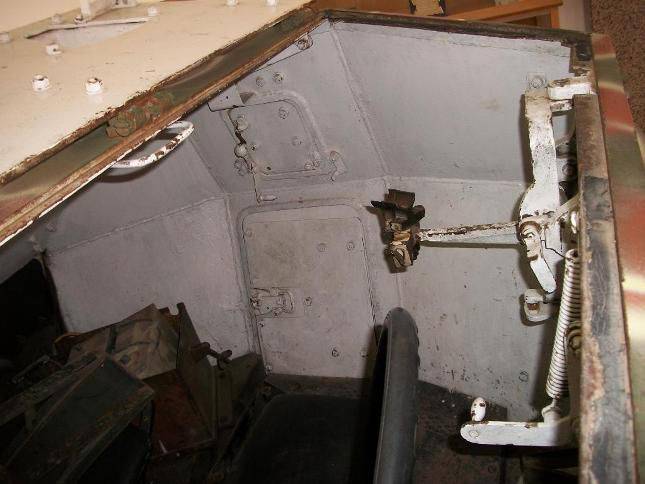 Workplace commander with a machine gun. Photo by Warwheels.net

Despite all the shortcomings, the Italian military well appreciated the new project and began to plan the mass production of new technology with its subsequent operation. According to some data, by the time the tests began, it was decided to abandon the supply of new armored vehicles to the units directly involved in the battles. This technique was planned to be used for reconnaissance and patrolling in the rear.

The massive construction of Lancia Lince serial armored cars made it possible to compensate for the loss of equipment, which increased further during the development of the project. The first production Lynx rolled off the assembly line at the start of the 1943 of the year. Prior to the capitulation of the Kingdom of Italy in September, the companies Lancia and Ansaldo managed to build at least a new type of 250-260 machines. A part of this technology was handed over to the military.

After the surrender, the overwhelming majority of new armored vehicles passed to the Italian social republic. In addition, some of the cars were transferred to Germany. In the German divisions, Italian-made machines were designated as Panzerspähwagen (Pz.Sp.Wg.) Lince 202 (I). Due to their low combat qualities, armored cars were used only in police units and were mainly used for patrols. Often, machine-gun armored vehicles were involved in the fight against partisans. 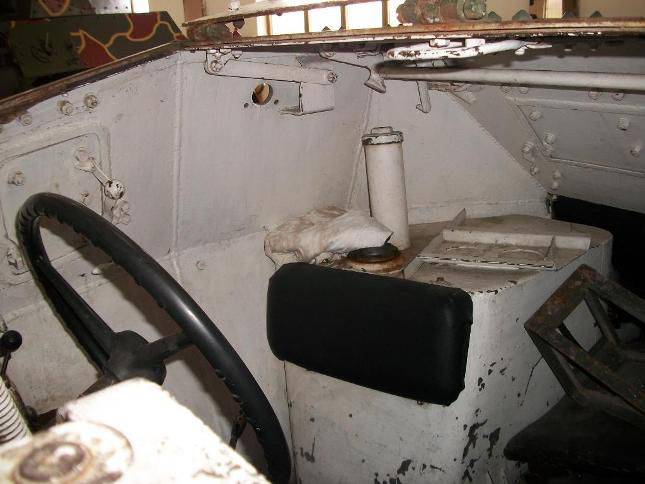 After the end of the war in Europe, all the remaining armored vehicles Lancia Lince were returned to Italy. After repair and restoration, they were handed over to the police, the Carabinieri Corps and some other structures. Due to the relatively calm military and political situation on the continent, this technique was used only in various exercises and was never used in real battles. Service armored "Lynx" lasted until the mid-fifties. By this time, almost all the armored vehicles had exhausted their resources and were written off as useless.

Almost all Lince armored cars were destroyed in battle or stripped of metal. Nevertheless, several cars managed to live up to our time. Now they are exhibits of museums in Rome, Lecce and Turin.