Attack of the dead. To the 100 anniversary of the feat of defenders of the fortress Osovets 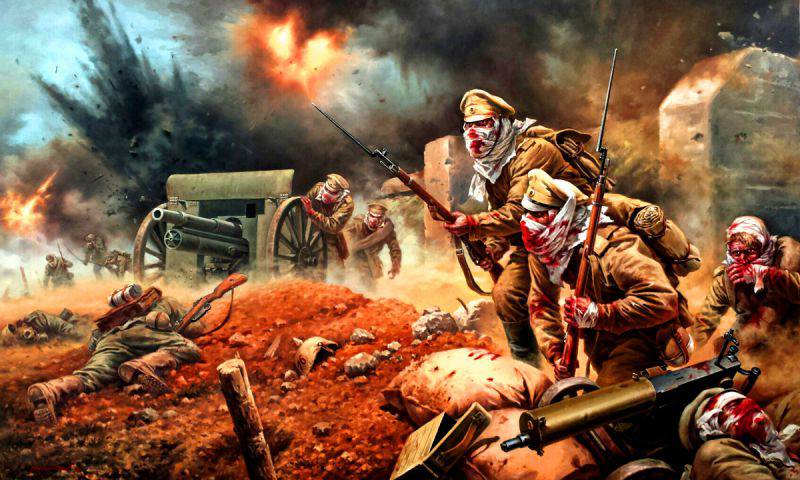 6 August marks the 100 anniversary of the famous "Attack of the Dead" - an event unique to stories Wars: a counter-attack of the 13 Company of the 226 of the Zemlyansky Regiment, which survived the German gas attack during the assault of the Osovets 6 August (24 of July) 1915 by the German troops. How it was?

It was the second year of the war. The situation on the Eastern Front was not in favor of Russia. 1 May 1915, after the gas attack at Gorlitsa, the Germans managed to break through the Russian positions, and a large-scale offensive by the German and Austrian forces began. As a result, the Kingdom of Poland, Lithuania, Galicia, a part of Latvia and Belarus were abandoned. Only by the captives, the imperial army of Russia lost 1,5 a million people, and the total losses in 1915 a year totaled about 3 millions killed, wounded and prisoners.

However, was the great retreat of 1915 of the year a shameful flight? Not.

The prominent military historian A. Kersnovsky writes about the same Gorlitsky breakthrough: “At dawn on April 4, the 4th Austro-Hungarian and XI-th German armies attacked the 9th and 10th corps on the Danube and at the Gorlitsa. A thousand guns — up to 19-inch caliber inclusive — flooded our shallow trenches at the front of the 12 versts with a fire-sea, after which Mackensen’s infantry and Archduke Joseph Ferdinand rushed to the assault. Against each of our corps was for the army, against each of our brigades - by corps, against each of our regiments - by division. Encouraged by the silence of our artillery, the enemy considered all our forces obliterated. But from the crushed trenches, piles of people half-poured with the earth rose - the remnants of an exsanguinated, but not crushed, regiments of 35, 42, 31 and 61 divisions. It seemed that the Zorndorf fusiliers rose from their graves. With their iron chest, they sprung a blow and prevented the catastrophe of all Russian armed forces. ” 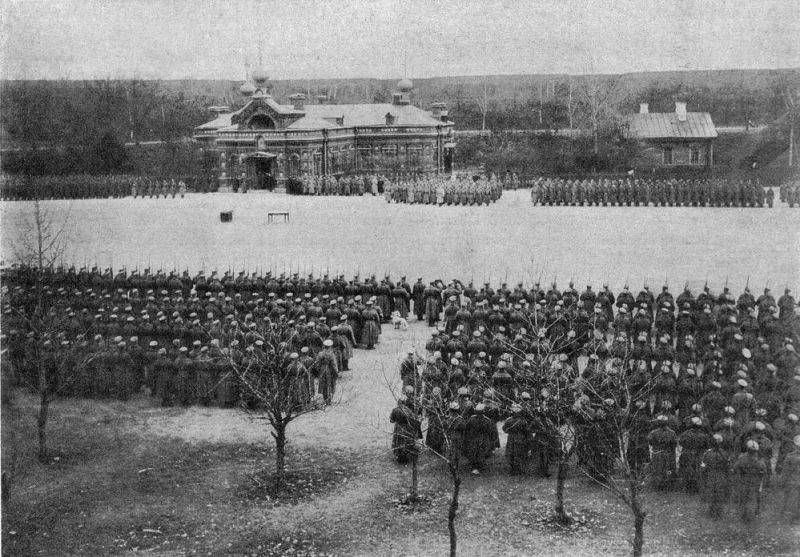 Garrison of the Osovets Fortress

The Russian army was retreating because it experienced shell and gun hunger. For the most part, Russian industrialists are liberal cheers-patriots who shouted “Give the Dardanelles!” In 1914 and demanding to provide the public with power for the victorious end of the war, were unable to cope with weapons and shell deficiency. At the breakthrough site, the Germans concentrated up to a million shells. Russian artillery could respond to one hundred German shots with only ten. The plan to saturate the Russian army with artillery was foiled: instead of 1500 guns, it received ... 88.

A poorly armed, technically illiterate compared to a German, a Russian soldier did what he could, saving the country, redeeming the authorities' mistakes, laziness and self-interest of the rear men with his personal courage and blood. Without shells and cartridges, retreating, the Russian soldiers inflicted heavy blows on the German and Austrian troops, whose cumulative losses for 1915 a year totaled about 1200 thousand people.

In the history of the retreat of 1915, the glorious page is the defense of the Osovets fortress. She was only 23 kilometers from the border with East Prussia. According to the participant of the defense of Osovets S. Khmelkov, the main task of the fortress was “to block the enemy’s nearest and most convenient way to Bialystok ... to force the enemy to lose time or to conduct a long siege, or to search for workarounds.” And Bialystok is the road to Vilna (Vilnius), Grodno, Minsk and Brest, that is, the gate to Russia. The first attacks of the Germans followed already in September 1914 of the year, and from February 1915 of the year began systematic assaults, which fought off during the 190 days, despite the monstrous German technical power. 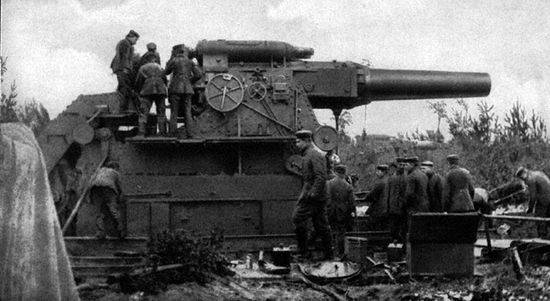 They delivered the famous "Big Bertha" - siege guns of 420-millimeter-caliber, 800-kilogram shells which broke through two-meter steel and concrete floors. The funnel from such an explosion was 5 meters deep and 15 in diameter. Under Osovets brought four "Big Bertha" and 64 other powerful siege weapons - a total of 17 batteries. The most terrible shelling was at the beginning of the siege. “February's opponent 25 opened fire on the fortress, brought it to 27 and February 28 to a hurricane, and so continued to smash the fortress to March 3,” S. Khmelkov recalled. According to his calculations, this week a horrendous shelling of 200 – 250 thousands of heavy shells was fired at the fortress. And in total during the siege - up to 400 thousands. “The view of the fortress was frightening, the whole fortress was shrouded in smoke, through which in one or another place huge fiery tongues burst from the explosion of shells; pillars of earth, water, and whole trees flew upward; the earth shook, and it seemed that nothing could withstand such a hurricane of fire. The impression was such that not a single person would leave the whole of this hurricane of fire and iron. ”

And yet the fortress stood. Defenders were asked to hold at least 48 hours. They survived 190 days, while losing two Berthas. It was especially important to keep Osovets during the Great Offensive, in order to prevent Mackensen’s legions from slamming Russian troops in a Polish sack. 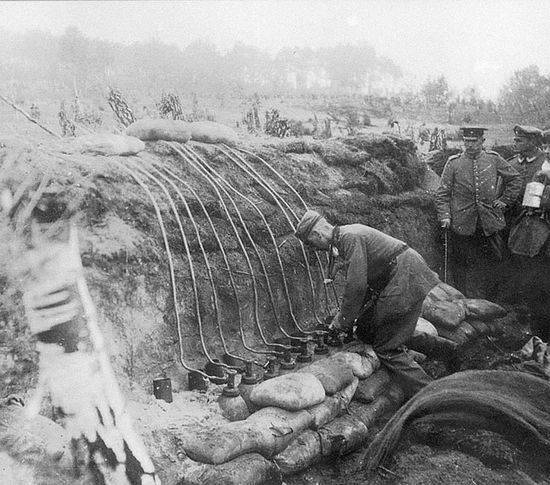 Seeing that the artillery was not doing its job, the Germans began to prepare a gas attack. Note that the poisonous substances were banned at one time by the Hague Convention, which the Germans, however, cynically despised, like much more, based on the slogan: "Germany is above all." National and racial exaltation paved the way for the inhuman technology of the First and Second World Wars. German gas attacks of the First World War are the forerunners of gas chambers. The personality of the “father” of the German chemical weapon Fritz Gaber is characteristic. He loved from a safe place to watch the torment of poisoned enemy soldiers. It is significant that his wife committed suicide after the German gas attack at Ypres.

The first gas attack on the Russian front in winter 1915 of the year was unsuccessful: the temperature was too low. Subsequently, gases (primarily chlorine) became reliable allies of the Germans, including near Osovets in August 1915 of the year. 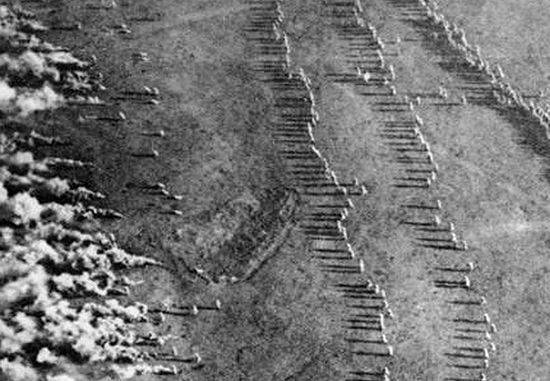 The Germans prepared the gas attack carefully, patiently waiting for the right wind. Deployed 30 gas batteries, several thousand cylinders. And on August 6 in the morning 4 a dark green mist of a mixture of chlorine and bromine flowed into Russian positions, reaching them in 5 – 10 minutes. The gas wave 12 – 15 meters in height and width 8 km penetrated to a depth of 20 km. Gas masks from the defenders of the fortress was not.

“Everything alive in the open air on the bridgehead of the fortress was poisoned to death,” the defense participant recalled. - All greens in the fortress and in the immediate area along the path of gas movement were destroyed, the leaves on the trees turned yellow, curled and fell off, the grass turned black and lay down on the ground, flower petals flew around. All copper objects on the fortress bridgehead — parts of guns and shells, washstands, tanks, etc. — were covered with a thick green layer of chlorine oxide; food items stored without hermetic closures — meat, oil, lard, vegetables — turned out to be poisoned and unsuitable for consumption. ” 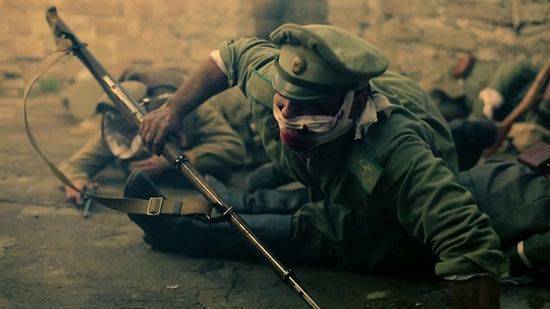 Attack of the dead. Reconstruction

German artillery re-opened a massive fire, followed by a fire shaft and a gas cloud to attack the Russian advanced positions moved 14 landwehr battalions - and this is no less than 7 thousands of infantrymen. Their goal was to take the strategically important Sosno position. They were promised that they would meet no one except the dead.

Aleksey Lepeshkin, a participant in the defense of Osovtsa, recalls: “We did not have gas masks, so the gases caused terrible injuries and chemical burns. During breathing, wheezing and bloody foam escaped from the lungs. The skin on the hands and faces blistered. The rags with which we wrapped the faces did not help. However, the Russian artillery began to act, sending a projectile behind the projectile from the green chlorine cloud towards the Prussians. Then the head of 2's defense department of Osovets Svechnikov, shaking from a terrible cough, croaked: “My friends, do not die to us, like Prussians-cockroaches, from injury. Show them to remember forever! ”

And those who survived the terrible gas attack rose, including the 13 company, which lost half of the squad. It was headed by Second Lieutenant Vladimir Karpovich Kotlinsky. The “living dead” walked towards the Germans, with faces wrapped in rags. Shouting "Hurray!" Was not strong. The fighters were shaking from coughing, many were coughing up blood and lung pieces. But went. 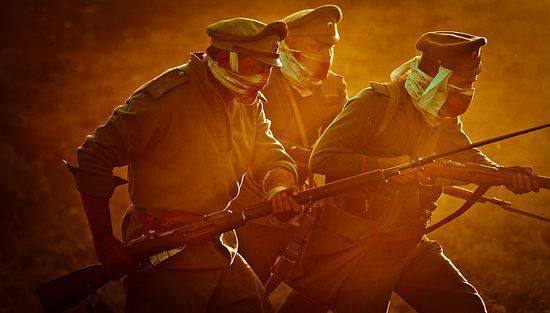 Attack of the dead. Reconstruction

One of the eyewitnesses told the Russkoye Slovo newspaper: “I cannot describe the bitterness and rabies with which our soldiers marched on the German poisoners. Strong rifle and machine-gun fire, densely torn shrapnel could not stop the onslaught of angry soldiers. Exhausted, poisoned, they fled for the sole purpose of crushing the Germans. There were no backward, no one was in a hurry. There were no separate heroes here, companies went as one person, animated by only one goal, one thought: to die, but to take revenge on mean-spirited poisoners. ” 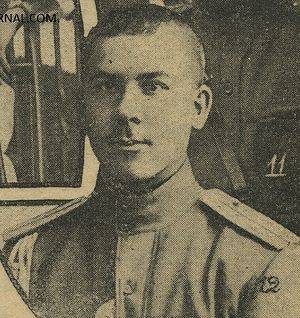 The diary of the 226 battlefield of the Zemlyansky regiment states: “Coming closer to the enemy’s steps on 400, lieutenant Kotlinsky, led by his company, rushed to the attack. With a bayonet strike, he knocked the Germans from the position they occupied, forcing them to flee in disarray ... Without stopping, the 13 Company continued to pursue the fleeing enemy, knocked him out of the trenches of the 1 and 2 sections of the Sosninsky positions with bayonets. They reopened the last one, returning our anti-assault gun and machine guns captured by the enemy. At the end of this dashing attack, Lieutenant Kotlinsky was mortally wounded and transferred command of the 13 Company to Second Lieutenant 2 of the Osovetsky Sapper Company, Strezheminsky, who completed and ended the cause so well-started by Second Lieutenant Kotlinsky. ”

Kotlinsky died in the evening of the same day, the Highest order from 26 September 1916, he was posthumously awarded the Order of St. George 4-th degree.

By the end of August, the retention of Osovets lost all meaning: the front rolled far to the east. The fortress was properly evacuated: the enemy was left not so much the guns - not a single shell, patron or even a tin can was taken by the Germans. The guns at night were pulled down the Grodno highway along 50 soldiers. On the night of August 24, Russian sappers blew up the remnants of the fortifications and left. And only 25 August Germans ventured to enter the ruins.

Unfortunately, Russian soldiers and officers of the First World War are often blamed for lack of heroism and sacrifice, considering the Second Patriotic War through the 1917 prism of the year - the collapse of power and the army, “treason, cowardice and deceit”. We see that it is not.

The defense of Osovets is comparable to the heroic defense of the Brest Fortress and Sevastopol during the Great Patriotic War. Because in the initial period of the First World War, the Russian soldier went into battle with a clear consciousness, for which he was going, “For Faith, Tsar, and Fatherland.” He walked with faith in God and a cross on his chest, girded with a sash with the inscription "Alive in Help of the Most High", putting his soul "for his friends."

And although this consciousness has clouded as a result of the February 1917 rear insurgency, it, albeit in a slightly modified form, was revived after many sufferings in the terrible and glorious years of the Great Patriotic War.