Belarusian Special Forces take the exam on the marsh picks

October 29 2011
5
The krapovy beret is a uniform headdress of units and subunits of special-purpose internal troops in a number of states on the territory of the former USSR - Russia, Belarus, Kazakhstan, Uzbekistan and Ukraine, and earlier - the internal troops of the USSR Ministry of Internal Affairs. It is a subject of pride and a sign of exceptional valor special forces.
The right to wear a krapovogo beret have military personnel (w / cf) special-purpose units (SPN) with sufficient professional, physical and moral qualities, successfully passed qualification tests. In addition, the maroon beret can be awarded for courage and bravery shown in the performance of military duty during combat operations and special operations, as well as for special merits in the development of units and special-purpose units. 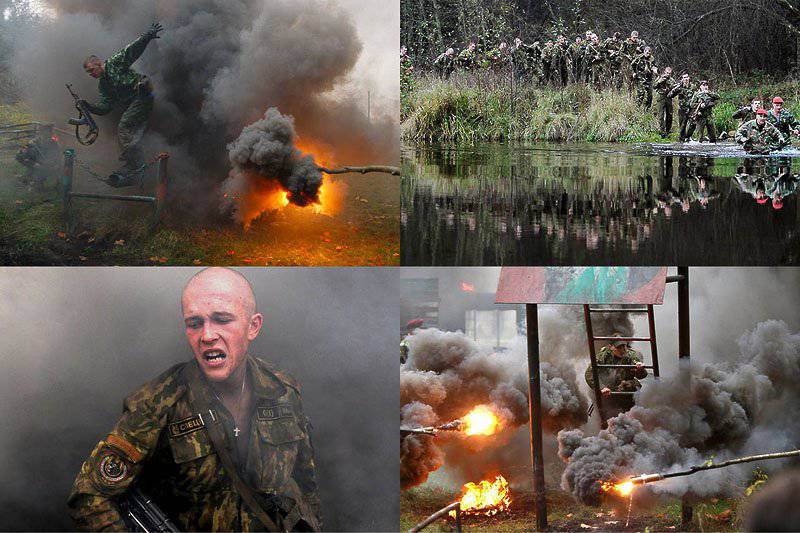 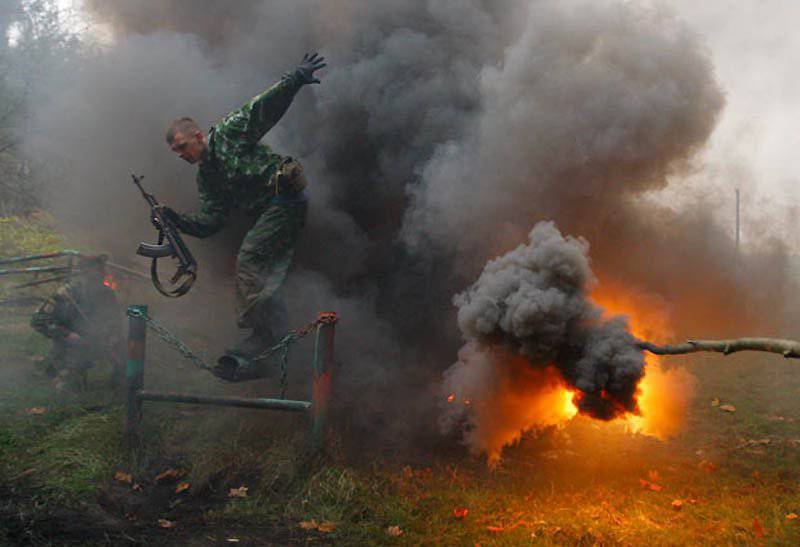 1. A fighter of the special units of the Ministry of Internal Affairs of Belarus is balancing on the tube during an event on checking the combat readiness near the village of Volovshchina. (Sergei Grits)
The purpose of tests on the marsh beret - The purpose of the tests - To identify soldiers with the highest individual training for the neutralization of armed criminals, the release of hostages and other tasks in critical situations and under extraordinary circumstances, as well as the creation of an incentive for the education of high moral qualities of soldiers. 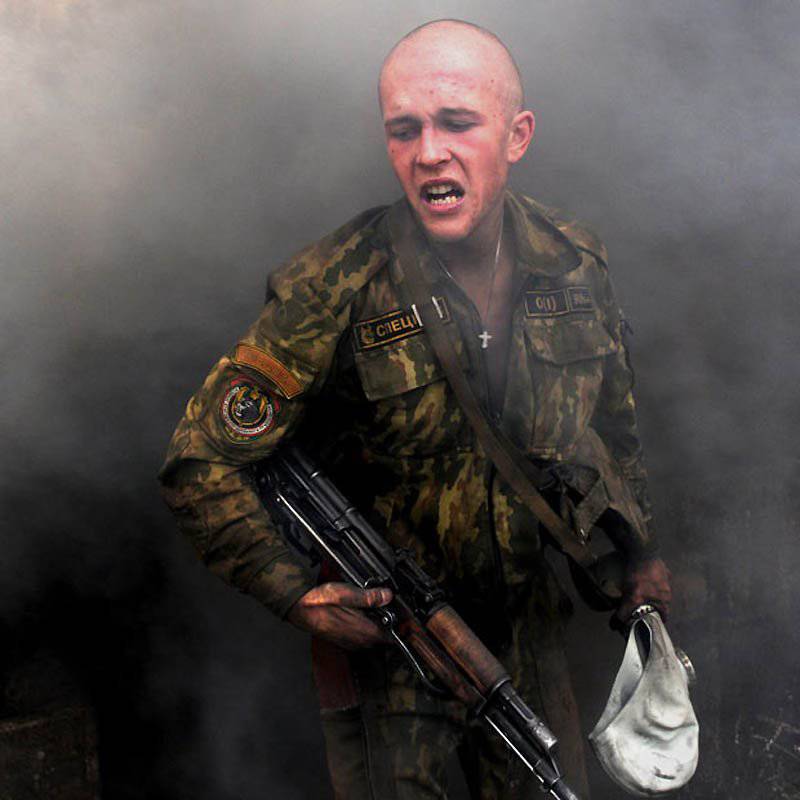 2. The fighter of the special units of the Ministry of Internal Affairs of Belarus is in the smoke during the exam on the maroon beret - a symbol of courage and professionalism. (VIKTOR DRACHEV / AFP / Getty Images)
The preliminary stage of testing is the final test for the period of training under the program of special-purpose units. The overall assessment for the check should not be lower than “good”, and for special fire, special physical and tactical training of the internal troops - “excellent”. Testing includes - running 3 thousands of meters; pull-up (according to the NFP-87); Cooper's test (not to be confused with 12 min. running) - 4 × 10 (push up from the floor, crouching, crouching, abdominal exercise, jumping out of crouching) is performed in seven repetitions. Testing takes place 1-2 the day before qualification tests. 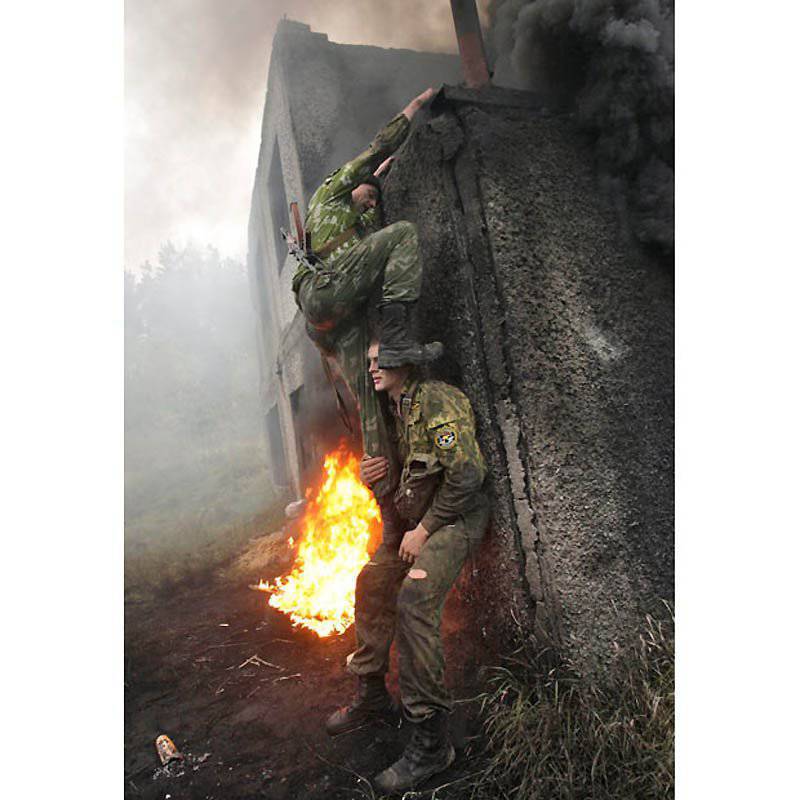 3. A special forces soldier of the Ministry of Internal Affairs of Belarus helps a comrade to climb an obstacle. (EPA / TATYANA ZENKOVICH)
The main tests are carried out on the same day and include a forced march of at least 10 km, followed by overcoming the obstacles in the SPP (special obstacle course) under extreme conditions, testing training on storming high-rise buildings, acrobatics and hand-to-hand combat. 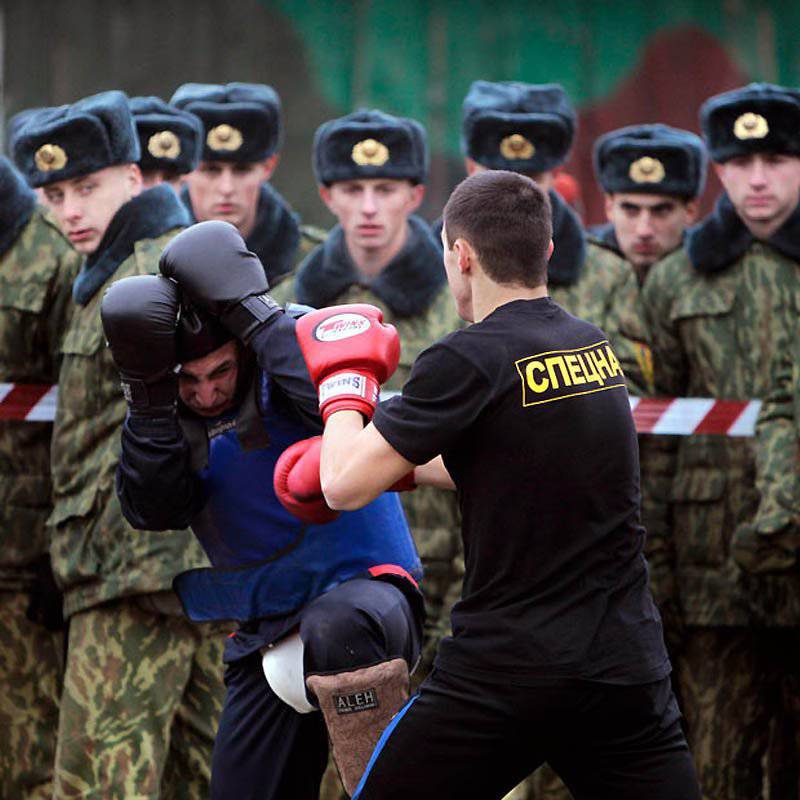 4. Test of melee combat skills. (REUTERS / Vasily Fedosenko)
If there are 3 comments, the soldier is removed from further tests. In addition, the decision of the doctor on the test - the most important thing. 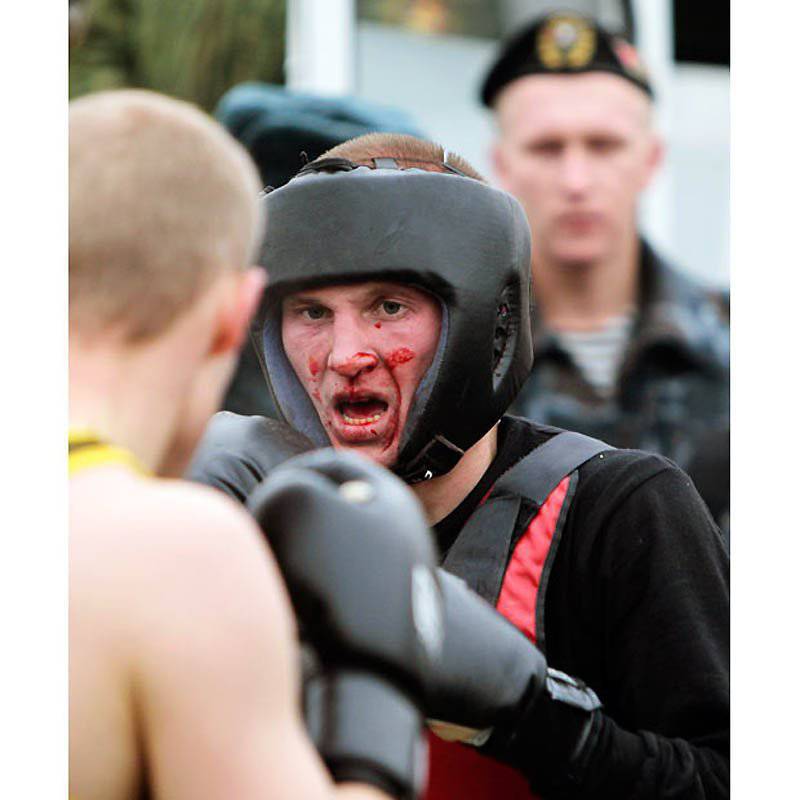 5. Sparring during the verification of the skill of hand-to-hand combat of the special forces of the Ministry of Internal Affairs of Belarus. (REUTERS / Vasily Fedosenko)
To pass the test of all participants is impossible. Only 2-3% of all participants take up 20 and 30 tests. The test will vary and become more complex, last until this number is reached, the 12-kilometer cross can grow into the 15-kilometer, and so on. 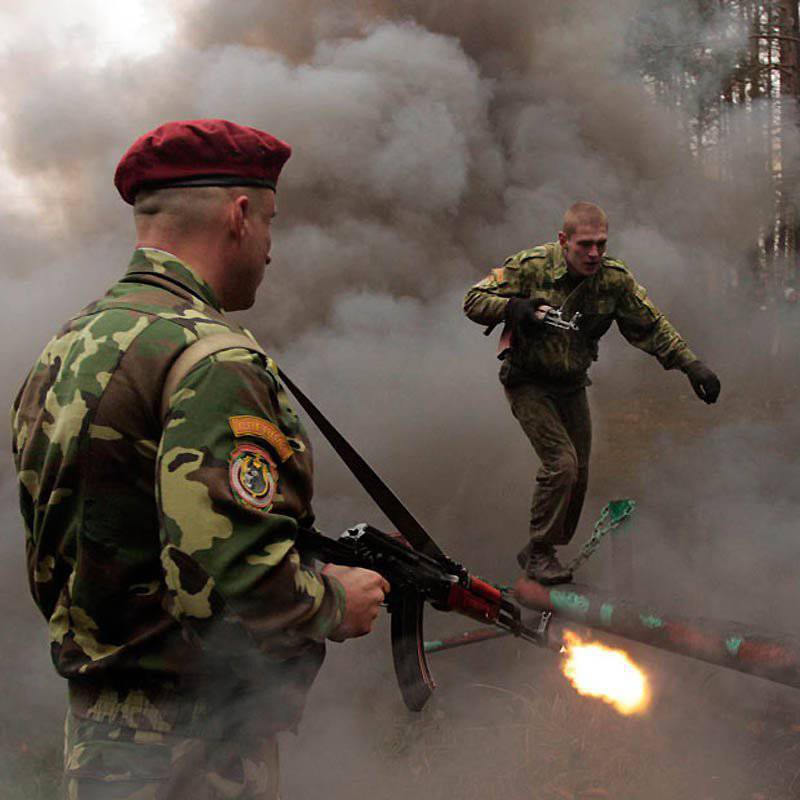 6. The employee must balance on the tube, despite the fact that the officer shoots a machine gun at his feet. (REUTERS / Vasily Fedosenko)
After performing acrobatic elements, the subjects show sets of special exercises. 3 melee complex and 1 with weapons. 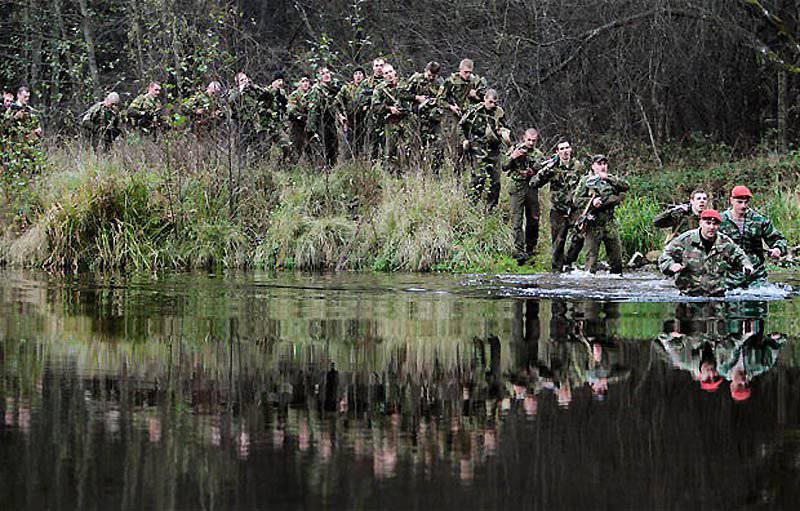 7. Fighters cross the lake near the village Volovshchina. (REUTERS / Vasily Fedosenko)
The traditions of the Special Forces of the Internal Troops in most post-Soviet states not only retained their high status, but also developed into a real cult. The handing of the blood beret following the results of the qualification tests for the best fighters takes place in the special forces of the Interior Troops of Belarus, Kazakhstan, Uzbekistan, Ukraine 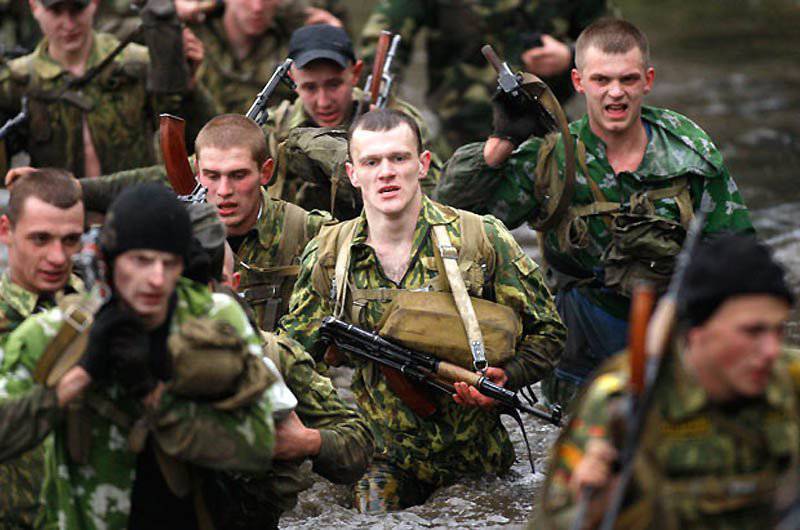 8. Fighters with equipment cross the lake. (Sergei Grits / AP)
In different countries, tests for the right to wear a krapovogo beret are held in accordance with local conditions and traditions. The order of implementation may vary, but the meaning of the tests is the same for all - the fighter must go through a series of physical and psychological stresses on the verge of the possibility of human strength. Common to all countries is a full-distance long-distance march, shooting from a regular weapon, hand-to-hand combat. 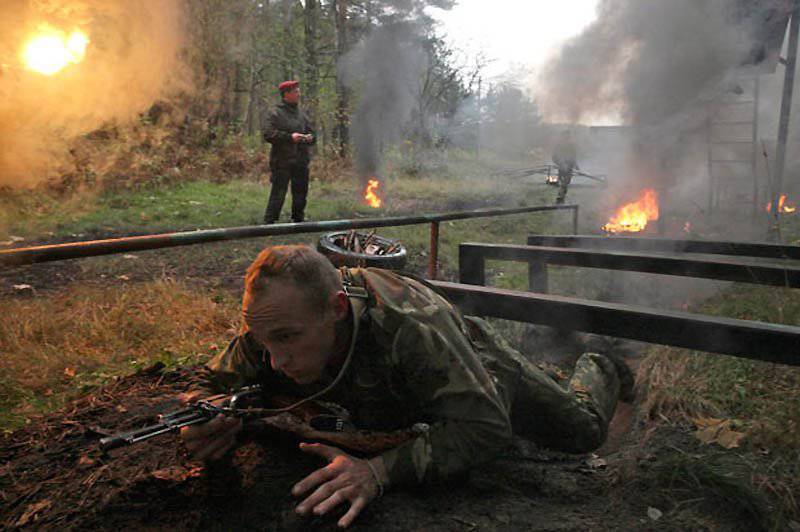 9. Special Forces overcomes the obstacle course. (EPA / TATYANA ZENKOVICH)
The handing of the blood beret is carried out with the general construction of a military unit (participants of examination tests) in a solemn atmosphere. 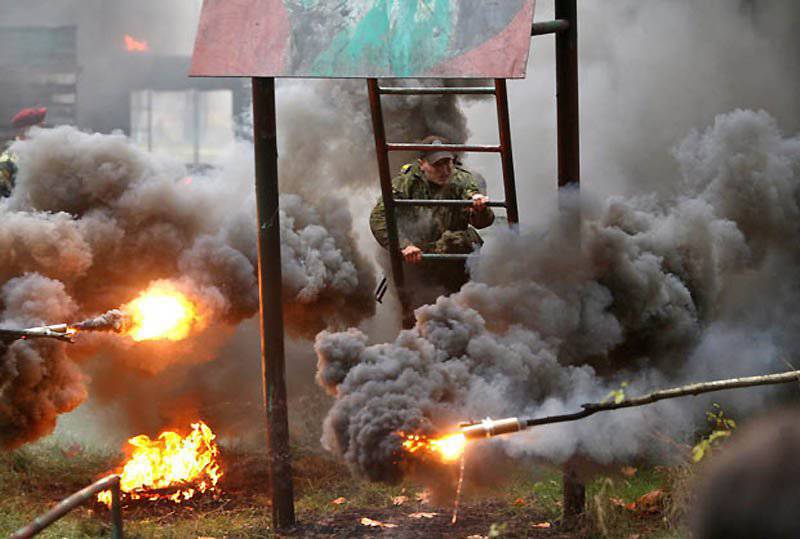 10. Special Forces overcomes the obstacle course. (EPA / TATYANA ZENKOVICH)
From this point on, the soldier has the right to wear a maroon beret with casual and formal dress. In the “Special Notes” military ticket column, as a rule, a corresponding entry is made and sealed with the official seal of the part. Later issued a certificate with an identification number confirming the right to wear krapovogo beret. 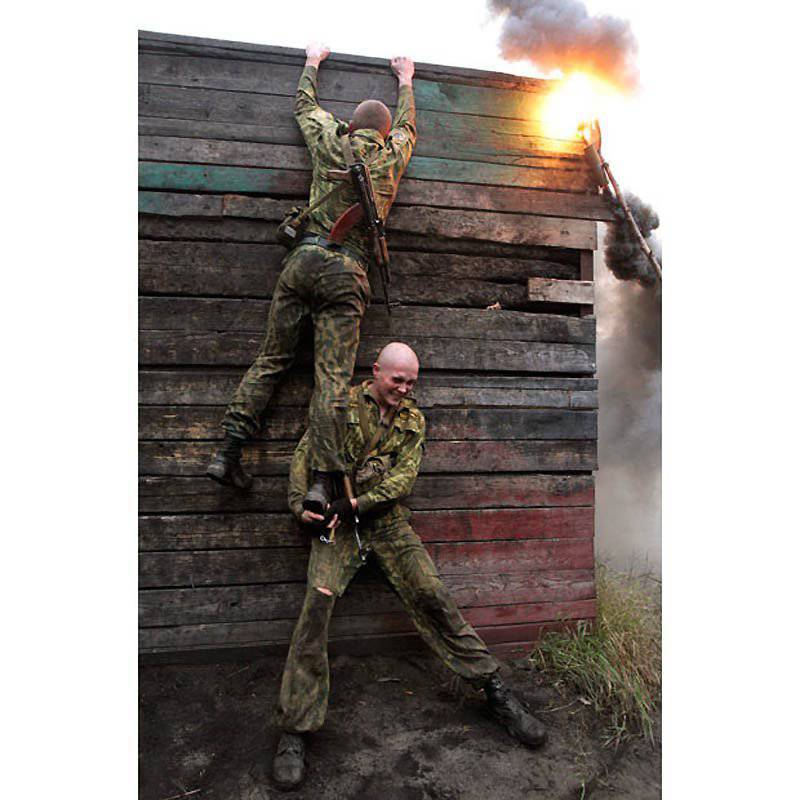 11. A special forces soldier of the Ministry of Internal Affairs of Belarus helps a comrade to climb an obstacle. (REUTERS / Vasily Fedosenko)
For acts that discredit the title in / SL. units of Special Forces, a soldier may be deprived of the right to wear a maroon beret. 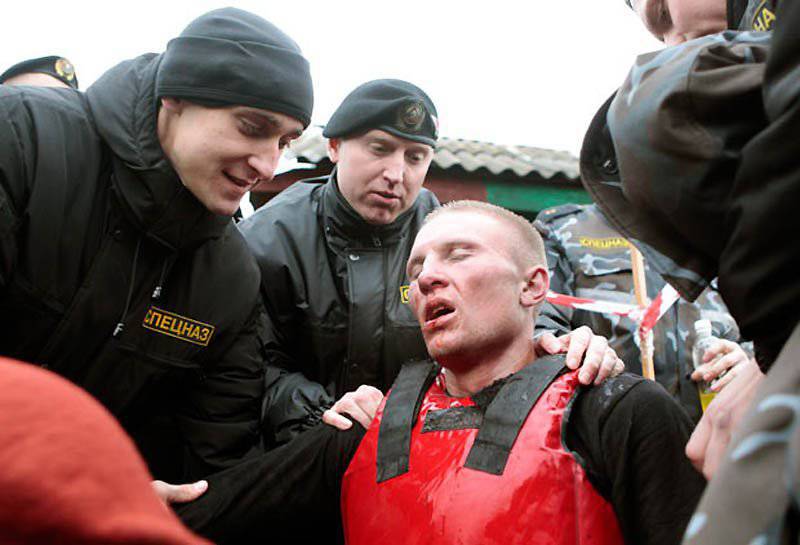 12. The soldiers congratulate the comrade who passed the test of hand-to-hand combat. (REUTERS / Vasily Fedosenko)
Krapovyy does not give his owner any privileges over the rest of the military (no salary increase, no promotion, no other special treatment). 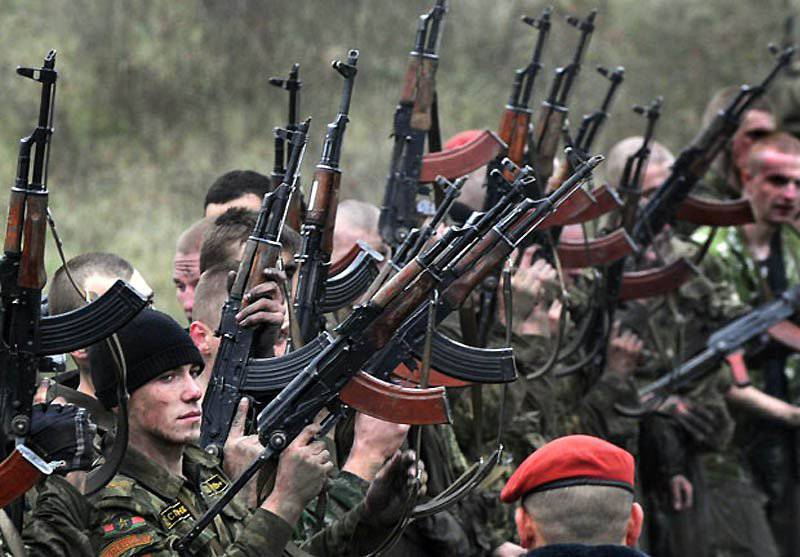 13. Belarusian commandos check the weapon during the exam on the maroon beret. (VIKTOR DRACHEV / AFP / Getty Images)
No matter how worn it is, it is not replaced with a new one - the “toughness” consists in taking (as well as the form) as faded as possible. No one, except the owner of a beret or another “rat”, even through carelessness can touch a spotted beret. This offense is strictly punished.
Ctrl Enter