Against whom is Iran deploying bayonets? 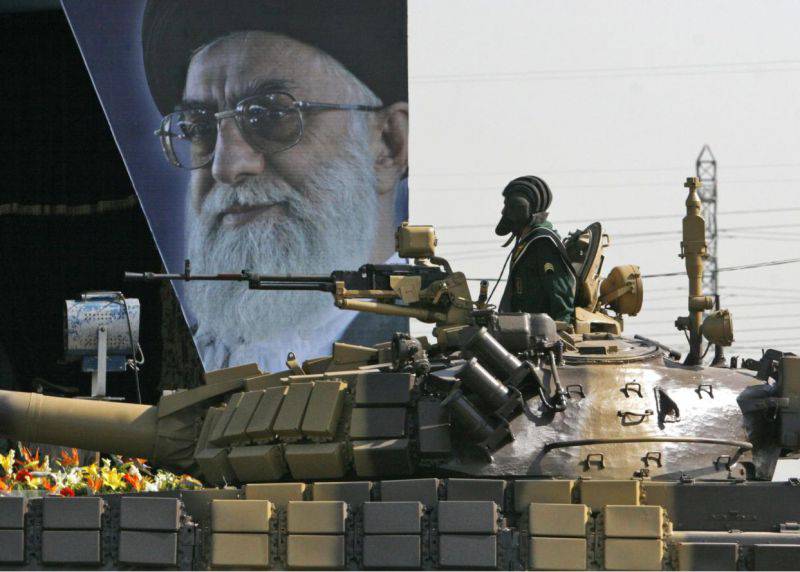 The agreement on Iran’s nuclear program has not yet managed to change the balance of forces in the Middle East, as the Muslim world began irreversible processes. Israel is preparing for the worst, once again considering the option of a preventive strike on the Islamic republic. Prime Minister Benjamin Netanyahu promises to defend himself by all available means. The head of the Cabinet does not intend to abide by the terms of the Vienna Agreement, “since Iran is still seeking to destroy the Jewish state,” the Daily Signal policy, published under the auspices of the American neoconservatives from the Heritage Foundation, quotes. If the rhetoric is postponed for a while, the situation is in favor of Tel Aviv, which by 2017 promises to build a gas pipeline from the Leviathan field to western Turkey. Tehran went on the offensive. Foreign Minister Javad Zarif calls on Israelis to follow Iran’s example and abandon nuclear arsenals. "Iran in the matter of preserving the nuclear non-proliferation regime weapons in the Middle East has always acted consistently. Despite the support of this initiative by some of our friends from the Arab countries, Israel continues to develop nuclear technology, ”Zarif wrote in an article for the British Guardian.

James Carafano, vice president of the Heritage Foundation for Security and Foreign Policy, supports Netanyahu, motivating the logic of a preemptive strike with the slogans of the Iranian street, which chants - "Death to Israel!", "A world without America!". As an example, Carafano is building dubious historical analogies, comparing the leadership of the Islamic Republic of Iran with Hitler, "who unveiled his plans to achieve world domination in 1925." “Israel cannot deal with Iran in conditions of regional isolation. Hamas threatens the security of the Jewish state from Gaza, and the Shiite Hezbollah from Lebanon. As for the chaos on the Sinai Peninsula, it is capable of destabilizing Egypt and Jordan, which will be facilitated by the militants of the “Islamic state,” Carafano said on the pages of the Daily Signal.

The United States is trying to reduce passions in Arab countries that are preparing for a confrontation with Tehran. For this purpose, Secretary of State John Kerry went on a Middle Eastern tour, which will end on August 8 with a visit to the Persian Gulf monarchies. It clarifies the channel France 24, Kerry arrived in Egypt 1 August, where he discussed the possibility of "strategic dialogue" with his colleague Sameh Shukri. Moreover, the trip took place amid the suspension (last March) of annual military aid to Cairo in the amount of $ 1,3 billion. The official report of the US State Department is limited to general phrases: “The parties will discuss the political situation in the region, as well as the state of human rights, which is important part in the regular dialogue between Washington and Cairo. " Americans can not stand aside, especially after July 30, the Crown Prince of Saudi Arabia, Mohammed bin Salman visited Cairo, where he signed with the President of Egypt Abdel Fattah al-Sisi a pact on strengthening military and economic cooperation between the two countries. The German Algemeiner has already outlined the anti-Iran orientation of the document, and the Egyptian pro-government publication Al-Ahram announced its details: “Countries are focusing on the development of military cooperation, including the creation of joint armed forces. The “Cairo Declaration” also implies investment in the electric power industry and transport. ” It is possible that the White House decided to enlist the support of the Arab Republic at the time when Turkey embarked on the path of military confrontation with the Kurds and the "Islamic State." Strangely enough, America has no ally left in the Muslim world who would not fight on the territory of a neighboring state.

Turkey’s hostilities against Iraqi and Syrian Kurds threaten Tehran’s position in the European direction. Proof of this is the July 27 explosion of the Iran-Turkey gas pipeline in the eastern province of Agri; The sabotage occurred inside Turkish territory, 15 kilometers from the border with the Islamic Republic, Reuters specifies, citing Energy Minister Taner Yildiz. At stake are large deliveries of “blue fuel” - 10 billion cubic meters of gas annually. For Ankara, natural gas is of strategic importance: with the help of this raw material, the country's economy satisfies about 50% of the need for electricity. Iran for Turkey is the number two supplier after Russia. The total volume of deliveries to the republic is 40 billion cubic meters annually. The shadow of suspicion immediately fell on the Kurdistan Workers' Party, which in 1990's repeatedly undermined the pipeline. Hard times have also come for the Trans-Anatolian Gas Pipeline Project (TANAP). London and Baku become hostages of the military battles of Ankara and the Kurds. Great Britain and Azerbaijan can no longer remain above the clash, and preventive diplomacy is becoming a thing of the past: the bombing of northern Iraq and northern Syria is casus belli for local and Turkish Kurds. Iran is nervous. Major General Hassan Firuzabadi, Chief of the General Staff of the Islamic Republic of Iran, warns Ankara, criticizing the attacks on the Kurds, who, he said, had previously restrained the attack of the Islamic State on the Turkish border. "The governments of Turkey, Saudi Arabia and Qatar should not count on an alliance with the Islamic State." Terrorists want to dominate the entire Islamic world. Therefore, Ankara, Riyadh and Doha are not exceptions, ”the Lebanese satellite television channel Al-Manar, close to the Shiite Hezbollah, quotes the military.

From a tactical point of view, the Kurdish issue is even more important for Tehran than for Ankara. Moreover, during the Second World War, Kurdish statehood already functioned on the territory of modern Iran - the Mehabad Republic, which was suppressed in December 1946, after the withdrawal of the Soviet Army. More than 10 million Kurds live in Iran, which are compactly settled on the border with Iraq and Turkey, which, in a negative scenario, could block the gas transportation infrastructure that connects the economies of the two states. The Kurds are unlikely to forget Iran: in their biography in English and French, the President of Iraqi Kurdistan, Masoud Barzani, does not indicate the birthplace of Iran, but the Mehabad Republic. History often obeys symbols. Let us now turn to the defense theme.

Iran is arming. Who will help him?

The nuclear deal with Iran, among other things, opens up new opportunities for global aircraft manufacturing companies. Due to the sanctions and the long-time US ban on the supply of aircraft and spare parts to them, Iran’s fleet is very outdated - most aircraft are older than 25 in years. Accidents and air crashes because of this in recent years have not been uncommon. Now, Tehran intends to radically update its fleet by purchasing 400 aircraft for about 10 years, highlighting, according to some sources, $ 20 billion.

In connection with the opening of such a new large sales market, the question arises, what can Russian aircraft manufacturers rely on? I must say that rumors and statements about the sale to Iran of a certain number of short-range Sukhoi Superjet-100 (SSJ-100) aircraft appeared almost immediately. For example, Russian Transport Minister Maxim Sokolov said on July 15 that the parties are in talks to sell the SSJ-100. At the same time, statements from the Iranian side are more contradictory: the secretary of the association of national airlines, Magsud Asadi Samani, said that Iran would not buy Russian planes, due to several crash of Tupolev’s planes. Moreover, literally the next day, the head of the Civil aviation Iranian Muhammad Hada Karmi expressed hope that Iran will strengthen the air fleet including Russian-made cars. At the same time, negotiations were already underway with the two largest players in the world of civilian aircraft manufacturing - Boeing and Airbus.

The fight for the Iranian market has already begun. All means are used: misinformation, competition in the size of kickbacks and other behind-the-scenes “charms” of such deals. What can Russia offer to Iran? Unfortunately, very little, or rather one single model - the very same Sukhoi Superjet-100, the only civil aircraft developed from scratch in modern Russia. The share of imported components in the aircraft is about 50%. The characteristics of the aircraft are quite good, but the reputation of the plane crash that occurred during a demonstration flight over Indonesia has somewhat ruined its reputation. The plane crashed into the mountain due to crew error and improper tuning of the radar at the airport escort. However, in the 2014, 34 produced such machines, which is a huge number for the domestic post-Soviet civil aircraft industry. Already ordered about another 130 aircraft of this type. To reach a payback, “Sukhoy” needs to build 60 planes per year. Therefore, it is necessary to achieve a major contract with Iran with all the forces and means - there is an opportunity to almost double the portfolio of orders.

A promising medium-range MC-21 project is still far from being ready to seriously discuss overseas contracts for this aircraft (the start of serial production is 2020 year). And there is really nothing more - only the medium-haul Tu-204, produced by 1-2 units per year on obsolete facilities.

Despite the technical problems, Russia can help the cause, and civil aviation can pave the way for future military supplies. It's time to stock up on technology. Iran risks getting a new front line (inside the country), which is secretly generated by Turkey, striking attacks on Iraqi and Syrian Kurds. To this should be added the forced alliance of Israel with the Arabs - Saudi Arabia and Egypt. Blocks are defined, the figures are placed. The final stage of the "Arab Spring" is knocking on the door.