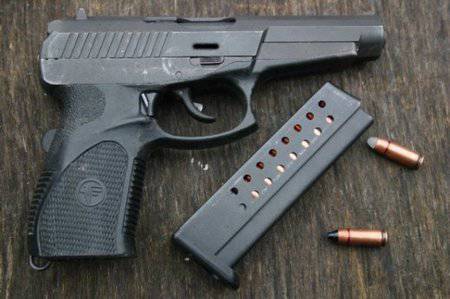 At the beginning of the 90 of the last century, our Ministry of Defense announced a competition to develop a promising pistol, which should replace the Stechkin automatic pistol. Several design bureaus (TsNIITochmash, Izhmeh, Tula TsKIB, etc.) took part in the competition, which was called “Grach”. In the original terms of reference of the competition there were no requirements for a particular cartridge. However, the new gun was supposed to be more powerful than the APS and PM. In 1993, the mission was adjusted - ammunition for the perspective pistol was assigned to the cartridge 9x19 Parabellum. After this event, one of the developments of Klimovskiy TsNIITochmash came out of the competition.


The fact is that the Klimovsk designers, under the leadership of P. Serdyukov and I. Belyaev, worked directly on two pistols. One of them was made under the cartridge Parabellum, and the second - under a completely new ammunition 9x21 РГ054. Also, the pistols had a different design of automation, although in the appearance of both samples you can notice some similar details.

The pistol chambered for 9х21, which had the nickname “Gyurza”, was withdrawn from the participation in the “Grach” competition, but the work on it was not stopped. The fact is that the original version of the cartridge 9х21 had a bullet with a steel core - this was the way Klimov’s engineers went, fulfilling the order of the Defense Ministry for a more powerful weapon. But the military preferred another cartridge, and in the special services and in the Ministry of Internal Affairs they became interested in new weapons. It is understandable - in the courtyard of the gangster 90-e, the villains are increasingly wearing bulletproof vests, and the bullets of a Makarov pistol are no longer terrible for them. So the “cartridge-pistol” complex, capable of penetrating third-class body armor, would be very useful. 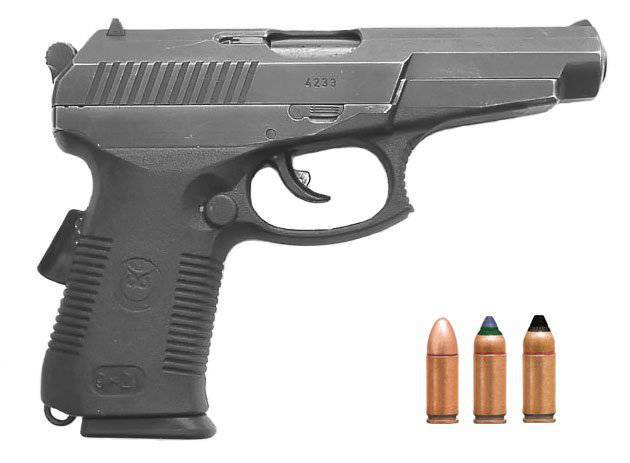 And already in 1996, the “Vector” CP-1 pistol and several ammunition went into service with the FSB: armor-piercing SP-10, SP-11 with a shell (bimetal sheath), SP-12 with an expansive and SP-13 with an armor-piercing tracer bullet. At the same time, an export version of the WG055C Gyurza pistol was created. It differs from “for domestic consumption” pistols by marking in English, a slightly neater finish and a snake on the side surface of the bolt. After the "Vector" was adopted by the special services, the military became interested in them again. As a result, with the 2000, the special units of the Ministry of Defense began to receive a new pistol, but with a number of design changes called SPS (Serdyukov self-loading pistol).

The design of the gun mixed. For example, the frame is partially metal, partially polyamide with reinforcement. The upper (metal) part of the frame, to which almost all parts of the gun are attached, is tightly pressed into the plastic (handle and trigger bracket). The use of plastic allowed, while maintaining the size and combat qualities, to reduce the weight of the pistol: about 1200 grams with a loaded magazine.

Automation "Vector" of all versions is based on the use of recoil energy in the short course of the trunk. The latter is rigidly locked by a larva swinging vertically. Threaded barrel, length 120 mm. The recoil spring, as on a number of other domestic pistols, is placed around the barrel. One end of it rests on the casing of the shutter, and the other in a special holding stop. This emphasis is a patented invention of designers TSNIITochmash. The trigger mechanism "Vector" is made on a double action system, the trigger is open. A characteristic feature of this particular pistol is that in order to fire from the pick-up unit it is necessary to set the trigger in an intermediate position - a kind of additional fuse.

Two full fuses, both automatic. One is located on the back surface of the handle and blocks the sear, and the other on the trigger - locks it. It should be noted that the two fuses are the subject of dispute. It is believed that the fuse on the handle - an anachronism. However, according to others, an extra security system does not hurt. At the same time, some shooters note a slight pull force, which with automatic fuses can lead to an accident. Another controversial point is that for the production of a shot from the “Vector” it is necessary to correctly take it in hand, which in the conditions of battle may require more time and cost an arrow of health or life. Therefore, some users tape tightly fix the fuse on the handle in the recessed position.

The gun feed comes from a double-row box magazine for 18 cartridges. According to the old technical tradition, the store is located in the hand. The latch fixing the magazine is located on the handle behind the trigger guard on both sides.

For aiming the gun has an open unregulated sight. On the rear sight and the front sight there are white dots.

Pistol "Vector" is available in several versions. It:
- WG055. Several prototypes were produced and a batch of 50 units for the Federal Guard Service.
- WG055C. Export version of the gun. It has a different plastic handle, drawing with a snake on the side and a little other contours of the handle.

- CP-1 "Vector". Serial modification for special services. The first version of the gun, on which the outer part of the trigger guard is not rounded, but with a protrusion for the finger, which provides a more comfortable grip with two hands. On the pistols of some lots, the front part of the staples received notches. СР-1 is produced at two enterprises: at TsNIITochmash and at the Mayak Kirovsky plant. Pistols of factories differ only in appearance: the manufacturer’s logos on the side surfaces of the handle. Klimov pistols can be identified by stylized images of an owl, and Kirov pistols by the sign "√" inscribed in a circle.

- CP-1M. The new modification of the pistol received a fuse on the handle of a larger size, and, consequently, the likelihood of its shortening due to various circumstances decreases. The store latch button is slightly modified. But the most important innovation of the CP-1M is the slide lag. Moreover, Klimov engineers provided for automatic removal from delay and filing of the cartridge after replacing the store.

We are in Yandex Zen
Brief history of pistol-carbines. Part of 5. Stechkin automatic pistol (APS)
9 XX21 cartridges and weapons for them (Article II)
10 comments
Information
Dear reader, to leave comments on the publication, you must to register.