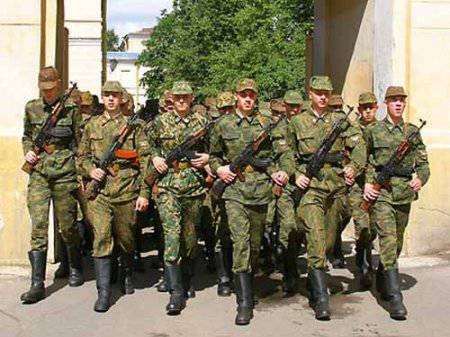 In the near future, the RF Ministry of Defense intends to carry out a number of reforms. So, it is planned to work out the issue of creating a military police in the Russian army. Currently, the department is studying foreign experience in this area.

“We are working on this issue, but, unfortunately, the design that could suit us has not yet been found, - quotes RIA“News“Statement by the head of the Russian military department Anatoly Serdyukov at a meeting with representatives of public organizations. "But we are studying the experience of foreign countries where such structures have been created and function effectively."

“First of all, we must understand what the military police will look like. Only after that it will be possible to start creating it, ”the Minister of Defense noted.

In addition, it is planned to purchase armor for cars and light armored vehicles from Germany. “When purchasing new military equipment, the RF Ministry of Defense will proceed from the need to ensure the protection of personnel,” Serdyukov said.

“We forced KamAZ and other Russian companies to establish contacts with foreign companies. They have already begun to contact in order to purchase light armor and use it in reconnaissance vehicles, armored personnel carriers, infantry fighting vehicles and other vehicles, ”the Defense Minister noted.

Currently, we are already talking about the purchase of light armor from one of the German companies. “We will not buy Russian vehicles and armored vehicles in the form in which they are,” Serdyukov said. "But we want the Russian industry to modernize its production and start creating what we really need and dictated by the time."

Changes are expected for Russian servicemen under the contract. Serdyukov said that they should receive a salary commensurate with the officer's. Family contractors, in turn, must live in apartments.

“We need to motivate the contractor so that he does not quit after the first contract in 3 years, and military service becomes a profession for him,” said the head of the ministry. - I believe that a contract soldier is the same serviceman as an officer, therefore his social security must be brought in line with the officer's.

“The budget that we have to provide contract service now does not allow us to recruit those we want into the army. And no one wants to come to the conditions that we now offer. We don’t want to recruit just anyone, because contractors have to work on complex and expensive equipment, ”said Serdyukov.

“Therefore, we will proceed from the assumption that we will not be able to afford 150 thousand contractors. There will be 90-100 thousand of them, but they will receive salaries at the level of officers, "the minister said. As a result, as it is assumed, the Ministry of Defense will be able to attract such contractors to the army, "which are necessary."

For conscripts, in turn, it is planned to introduce a five-day working week with two days off. At the same time, civilian organizations will prepare food for the military, clean up the territory and premises.

“We want to create a mode of work in which 5 days a week a soldier will intensively engage in physical training, combat training, mastering the entrusted weapons and technology, and Saturday and Sunday will be days off for him, "- said the minister.

“Of course, if a serviceman violates the rules of military service or poorly performs his duties, he may be deprived of dismissals for a while,” added Serdyukov.

For those who serve in remote military units, the "accumulated" days off can be used as additional leave. “We also want to change the current daily routine in the army, making the rise at 7 am, and the lights out at 23 pm (with the previous 6 and 22 hours, respectively). In addition, with increased physical exertion on servicemen, it is planned to introduce an additional hour of afternoon rest in all units, ”the minister said.

“In addition, revising the training programs taking into account the transition to a one-year term of service, we came to the conclusion that it is necessary to relieve the soldiers from performing functions that are not inherent to them,” the minister said. "These functions should be taken over by civic organizations."
Ctrl Enter
Noticed oshЫbku Highlight text and press. Ctrl + Enter
Military Reviewin Yandex News
Military Reviewin Yandex Zen
12 comments
Ad