August 2 2015
268
Russian President Vladimir Putin agreed to the proposal of the head of the Ministry of Agriculture Alexander Tkachev to destroy on the spot imported products from the sanctions list. Despite the fact that the ban on the import of certain food products from the EU, USA, Australia, Canada and Norway is valid from 7 August 2014, and is extended for another year from 6 August 2015, prohibited products continue to be imported into the country. 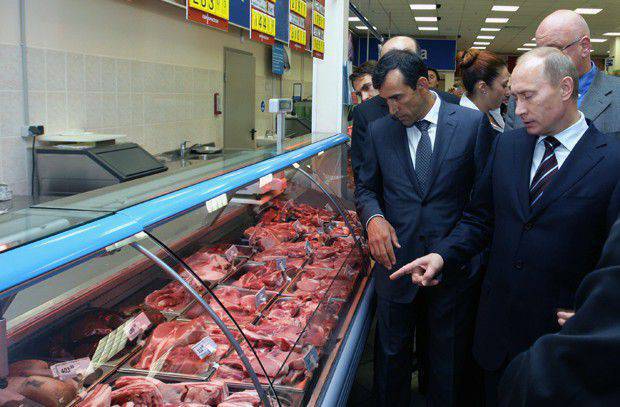 According to Deputy Prime Minister Arkady Dvorkovich, in recent months, several hundred attempts to import sanctions food products into Russia have been revealed. To cope with this problem, 24 July, the Minister of Agriculture of the Russian Federation Alexander Tkachev suggested to the president to make a decision on the destruction of such goods on the spot. In response, Vladimir Putin said: “I ask the administration and the government to work it out with lawyers and propose appropriate solutions.” Tkachev's proposal was also supported by the head of government, Dmitry Medvedev.

The desire to annoy the foreign "partners" is understandable. But in conditions when the overwhelming majority of the Russian population barely makes ends meet (according to November 2014, 15,7 million people live below the poverty line in Russia), products falling under the sanctions - beef, chicken, pork, dairy products, live, chilled and frozen fish and crustaceans, nuts, fruits and vegetables - could benefit people.

For example, a member of the Council for the Development of Civil Society and Human Rights under the President of the Russian Federation, Yevgeny Bobrov, offered to give banned products to the poor, including refugees from Ukraine.

In Russia, there are now more than 42 million pensioners. More than 65% of them do not have other sources of income other than pensions. The minimum pension in Russia is 6 thousand rubles.

There are more 1000 nursing homes and more 1500 orphanages in the country.

According to Pavel Astakhov, the ombudsman for the President of the Russian Federation for the Rights of the Child, at the beginning of 2015 in Russia there were more than 88 thousands of orphans. According to the Prosecutor General's Office, we have 1,5 – 2 million street and street children.

From 1 on April 2014, Russia, from Ukraine, according to the FMS of the Russian Federation, more than 800 thousands of citizens of Ukraine entered and did not leave, many of them are refugees.

Of course, the distribution of food will require some costs from the state. But after all, a lot of forces and means will also be needed for “destruction on the spot”.

“Costs will appear in both cases,” Yevgeny Bobrov told Russian Planet. - Technique, regulations, overexposure in warehouses. But one thing is just to destroy, and another thing is to give to people who need it. It’s not for nothing that I said about Ukrainian refugees: their maintenance requires six and a half billion rubles. In addition, do we have few social organizations? And then, the destruction of products is a process that requires very strict control. Otherwise, no one will simply ever know what the fate of a batch of sanctions goods actually was. And who will control and will we at least know something about it? In my opinion, this decision is pure populism for people who misunderstand patriotic values. ”

Whether it is right to call such measures populism is a moot point, for the popularity of the decision made by the people may turn out to be doubtful. But the idea to feed the poor for free is not just beautiful, it is also very Russian in essence. It’s not for nothing that in Russia, those who treat things insufficiently carefully say: “Well, how is it possible - neither to yourself, nor to people!”

And what a decent lesson we could give to the whole world. In fact: there is a war of sanctions, there are accusations everywhere, threats of new sanctions. And imagine, suddenly a message appears in this sea of ​​negativity that in Russia sanctions products feed the hungry and needy for free. Maybe it's not too late to change your mind?