Serdyukov as an alarming symptom 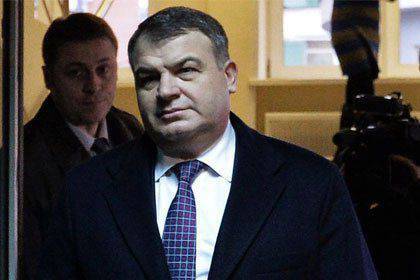 Having “forgiven” the ex-minister of defense and openly “pampering” him, the current government critically risks, the expert complains.

We have almost forgotten about Serdyukov, but it seems that his attitude is absolutely not sad.

Moreover, about such a fabulous finale for an extremely unpleasant stories Anatoly Eduardovich could only dream two years ago.

Everything could have turned out differently - and he would have riveted the stools for the army barracks somewhere on the border of the Arctic Circle. But no. Fate, which obviously had considerable powers, decided otherwise.

And now the amazing documentary evidence obtained by journalists of the newspaper Gazeta sees the light, according to which our eagle became the owner of the 50% share of a large commercial company in July of this year, as well as the owner of diamond square meters in the most expensive area of ​​the most expensive city in Russia.

In particular, the same apartment went into the possession of the ex-minister, where, until the morning of 8 in May of this year, the most glamorous prisoner in Russian history, Yevgeny Vasilyeva, languished.

The intrigue, however, is whether she will return to these walls after hers, as lawyers, short-term lodgings, "wang" out? And in what capacity? However, let's leave these predictions to ladies' magazines.

We can only admire the refined turns in the fate of the official, who, as it happened, was only the military investigators who spoiled the mood most of all, and then through ignorance.

In a conversation with a KM.RU columnist, Andrei Savelyev, a political scientist and leader of the Great Russia party, noted that the blatant impunity of the former defense minister is a “time bomb” for the government itself:

- I think that in our power already, figuratively speaking, that organ of feeling has been extinguished, which is responsible for its self-preservation. So cynical behavior of Serdyukov, who literally throughout the world was convicted of treason, says a lot about the critically unhealthy situation that has developed in power.

If Serdyukov is allowed to betray his Fatherland painlessly, elude the court and ultimately remain a major owner and entrepreneur, then it turns out that the state itself, as such, does not. Some kind of power exists, but this is no longer a state power. And there is no law: there is enough to become an “especially approximate” official — and no law will already apply to you. The main thing is not to go beyond certain agreed frames, to take "according to rank."

Serdyukov didn’t go beyond the limits assigned to him and didn’t leave; Yes, only the people, including those represented by honest security officials, turned out to be too vigilant and demanding - they had to play a whole long play with interrogations and a “solo exit” of the heroine Vasilyeva, to which all attention turned out to be.

But I dare to assure you: the people still did not buy into this snag, and did not forget about Serdyukov, as much as our authorities would not like to think otherwise. The authorities are pleased to think that the story of Oboronservis and other machinations of the former leadership of the Ministry of Defense is closed, but this hope is just evidence of the complete extinction of all self-preservation reflexes. And for any living organism it is inevitably fraught with death.

It is unfortunate that in the Kremlin they frankly underestimate the extreme danger of not even just finding Serdyukov free, but of the fact that he also feels so free at will. After all, the security officials look at all this, one part of which has drawn from this whole story for themselves that if Serdyukov is possible, then it is possible for them, and the other that those who allow such lawlessness need not be protected from righteous national anger.

In fact, the power now “with a light hand” repeats almost exactly the same picture that took shape at the end of 80's under Gorbachev. But what this eventually led us all remember. Do they remember this in the Kremlin?