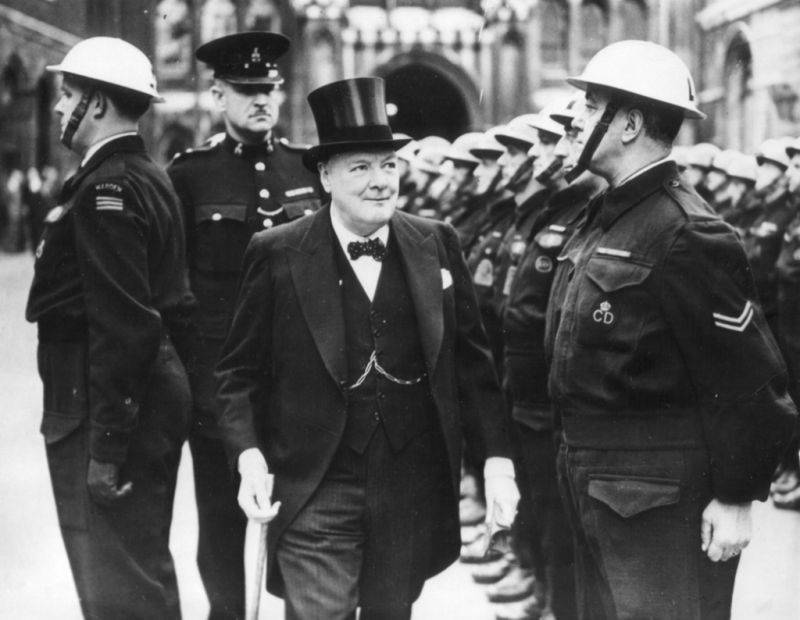 In the international situation that accompanies the 70 anniversary of the victory over German Nazism and Japanese militarism, it is impossible not to recall that the great union of the USSR, the USA and Great Britain, which decisively ensured this victory, collapsed amazingly quickly. Within a few months, the joint struggle with the common enemy gave way to the Cold War, with the beginning of which the former allies began to look at each other through the slot of the sight.

“Strikingly fast” is, however, only in the opinion of contemporaries of the Great Victory, who did not know about the secrets of big politics. In fact, the preparation of the West for the confrontation with the USSR began at the height of the Second World War. This was targeted, in particular, by the “Rankin” plan developed by the Allied forces headquarters in 1943 and which, after the landing of the Anglo-American troops in Western Europe, started to collapse the eastern front of the Germans under the blows of the Red Army, to the west and with its help stop the advance of the Soviet troops in Germany. Or the intention of Winston Churchill to unleash a war against the USSR under the plan of an emergency operation “Unthinkable”. Or the second birth of the Rankin plan in the summer of 1945: the joint intention of the Anglo-Americans to use unarmed units of the Wehrmacht in the event of a military clash with the Red Army.

The Soviet side was absolutely right, declaring at one of the meetings of the Control Council for the Administration of Germany that история knows few examples of such treachery and betrayal of allied obligations. Field Marshal B. Montgomery, who was part of the Control Council of the United Kingdom, initially tried to dismiss the accusation voiced by Marshal of the Soviet Union GK Zhukov, but then was forced to confirm the existence of the Planking Plan. He did this after Churchill, at one of the election rallies, said: yes, an order to collect German weapon and to prepare the units of the Wehrmacht, who had surrendered earlier in captivity, for possible joint actions against the Red Army, he really gave.

As for G. Truman, who replaced F. Roosevelt as president, he, like Churchill, found it possible to take a harsh tone towards the Soviet ally, without waiting for the end of the war. Arrived in April 1945 in the USA, Commissar for Foreign Affairs V.M. Molotov, he expressed sharp reproaches in the absence of progress in solving the Polish question. As a measure of pressure, Truman chose the threat of cessation of lend-lease supplies (why not economic sanctions of the 2014 – 2015 model?).

The US ambassador to Moscow, A. Harriman, who was present at the meeting later recalled: “I regretted that Truman was so tough about the matter. His behavior gave Molotov reason to tell Stalin that they were departing from Roosevelt’s policies. ” Harriman softened his assessment of the situation: the change of landmarks had become a fait accompli by that moment. Political thought in Washington increasingly revolved around the idea of ​​a collision with the USSR. In a memorandum drawn up in mid-May 1945, Acting Secretary of State J. Grew called for "immediately tightening" American policy towards the Soviet Union along all lines. He argued that "it is much better and safer to have a collision before Russia can carry out reconstruction work and develop its huge potential of military, economic and territorial power."

Proponents of a policy from a position of strength especially intensified after testing in the US and their practical use of nuclear weapons over Japan in August of 1945. What kind of allied solidarity could there be, if during the very days of the Potsdam Conference, the secret document “Strategic map of some industrial regions of Russia and Manchuria” was prepared for the head of the American nuclear weapons program, which listed 15 of the largest cities of the Soviet Union, starting with Moscow, as the primary targets for the bombing. The appendix gave a calculation of the number of atomic bombs required for the destruction of each of these cities, taking into account the experience of Hiroshima and Nagasaki. For example, for the defeat of Moscow and Leningrad, according to the authors of the document, six atomic bombs were required, the same type as the one that was dropped on Hiroshima.

By the beginning of 1946, the concept of preventive atomic warfare, which would preempt the transformation of the USSR into a nuclear power, was justified in the USA. Its development was directly related to the highly respected and well-informed military and political figures - US Air Force commander General H. Arnold, Brigadier General F. Everest, representing the Air Force in the Joint Military Planning Committee, commander aviation General K. Spaats, deputy commander of army aviation, one of the authors of the plan for the "carpet" bombing of Germany during the war, General A. Iker and others.

In January, 1946, speaking at the atomic energy commission set up by Truman, General L. Groves stated that he sees only two alternative behaviors for the United States if they want to maintain a monopoly on nuclear weapons: “Or we should have no inappropriate interpretations a realistic and binding for all international agreement ensuring the prohibition of atomic weapons, or we and our reliable allies should have exclusive superiority in this area. ” This meant that if the Soviet Union rejected the US-proposed plan for international control of atomic weapons, the United States was prepared to launch a preemptive strike against Soviet nuclear research centers in order to guarantee its “exclusive superiority” once and for all. General Groves proposed to act as follows: to present an ultimatum to Moscow demanding an end to scientific research and the production of nuclear weapons, and in case of refusing to accept the ultimatum, to deliver a crushing nuclear strike against the USSR.

The most detailed substantiation of a preventive nuclear war was given by a political analyst from Harvard University, J. Burnham, who suggested that it should be assumed that the Third World War had already begun. And if so, then the atomic bombing of the USSR should be considered as a new phase of military operations, as justified as the bombing of Hiroshima and Nagasaki.

All such ideas are vividly reflected in US National Security Council Directive No. 20 / 1 of 18 in August 1948. “US Objectives for Russia”, which predetermined America’s confrontation with the Soviet Union for several decades.

The text of the directive read: “The government is compelled, in the interests of the current political war, to outline even now, in peacetime, more definite and warlike goals towards Russia than was necessary towards Germany and Japan before the start of hostilities with them ...”

The main goals of the war of the West against the USSR were clearly formulated: “... a) to minimize the power and influence of Moscow; b) to carry out fundamental changes in the theory and practice of foreign policy, which the government in power in Russia adheres to ... "" This is, first of all, about that, "the directive emphasized," to make and keep the Soviet Union weak in political , militarily and psychologically compared with external forces beyond its control. ”

Of great importance is the recognition of the compilers of directive No. 20 / 1 in that their claims to control over the policy of the Soviet Union and its territory in the event of occupation of the USSR are not ideological, but geopolitical in nature: “What goals should we pursue in relation to any non-communist government? that may arise on part or all of Russian territory as a result of the events of the war? .. We must create automatic guarantees that ensure that even a non-communist and nominally friendly regime : a) did not have great military power; b) economically strongly depended on the outside world ... "

So, Washington was thinking about how “to carry out fundamental changes in the theory and practice of foreign policy, which the government in power in Russia adheres to ...” seven decades ago. Is that the political heirs of Truman and Dulles trying to solve this problem today? Yes, the task is the same: do not allow Russia to become strong. You can’t refuse observation of the head of the Russian Foreign Ministry, S. Lavrov, who said last November: The West does not hide the fact that the goal of anti-Russian sanctions is a change of political regime in Russia.

Do not think that this is a reaction to the Crimea and the Donbass. This manifestation of the desire, inherent in Western civilization, if it allows Russia to exist, then only as a state "weak politically, militarily and psychologically."