August 3 2015
38
Recently, former German Foreign Minister Yoshka Fischer accused Angela Merkel of transforming "European Germany" into "German Europe." Fisher often criticizes the Bundeskanzlerin. This time, Merkel got from a retired politician for the hard pressure of Greece, whose debt crisis the German government decided to use solely in German interests. And here is a new example of such a policy - the German tank builder KMW absorbs the French company Nexter. 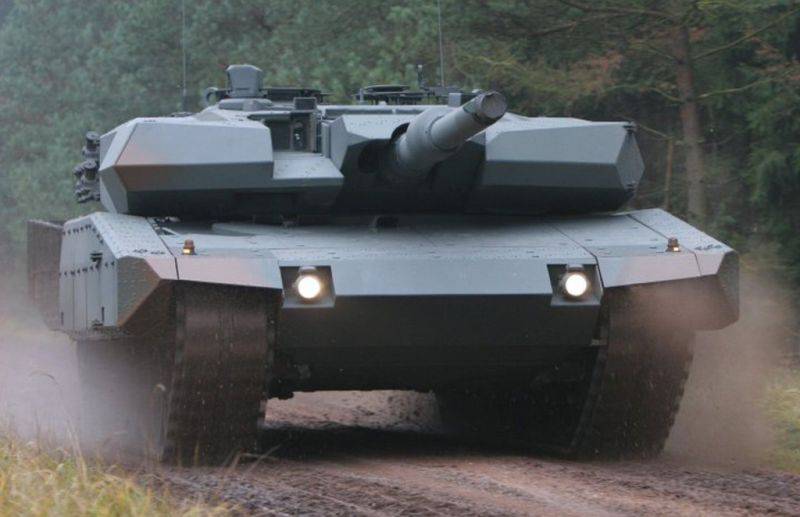 In fact, the combined company of tank builders will have over six thousand employees, its turnover will be about two billion euros. However, before the Airbus with its fifty-thousand-strong team and sales revenue for 40 billion euros, the new group clearly does not hold out. But the main thing is not even that. Airbus is owned by the European Aerospace and Defense Concern (EADS). This is a public company. Its shares are traded on European exchanges. The company’s assets include French, German, Spanish, British, and even Russian (state Vnesheconombank - 5,02%) capital. The production itself is located in several countries, which makes the project truly European.

The tank builders have a different layout. French Nexter is a pure state enterprise. It produces military ammunition and weapon. Among other things - Leclerc tanks and infantry fighting vehicles VBCI. The German concern Krauss-Maffei Wegmann (KMW) owns the Bode family and the industrial concern Siemens AG. He does a lot of things - he designs, develops and produces military equipment, in particular, tracked and wheeled armored vehicles. The most famous among them are Puma infantry fighting vehicles, PzH 2000 self-propelled artillery mounts and, of course, Leopard tanks.

Both companies are strictly national. Moreover, originally it was about the unification of KMW with another German concern Rheinmetall - one of the largest manufacturers of military equipment and weapons in Europe. Then the choice fell on the French. German tank builders have a long-standing relationship with them. In the distant seventies of the last century there was even a joint Franco-German program for the development of a unified tank based on the Leopard. In the 1979 year, at the initiative of the French, it was turned off. They say they attended to Paris, which will remain without their own development.

The French “Leclerc” made by the mid-eighties. In it, the design motifs of the Leopard were noticeably visible, except that the power plant was taken Finnish - with similar German characteristics. Further modifications brought the French tank closer to the German one, but Leclerc could not stand the competition in the arms market.

In addition to its own armed forces, the United Arab Emirates military bought a batch of French tanks, which provided financial assistance in the development and production of Leclerc. Here, perhaps, that's all.

Leopard has a different история. He embarked on seventeen countries of the world. It affected not only the possibilities of the German tank, but also German industrialists. Unlike the stingy French, the Germans did not disdain even bribes while promoting their products.

In the winter of last year, for example, a scandal broke out. Greek media published the full transcript of the interrogation of local entrepreneur Dimitris Papachrist. He called the prosecutor's office the names of German businessmen who bribed Greek officials or were aware of corruption schemes for the supply of weapons.

According to Papahrist, he “gave a bribe in the amount of 750 thousand euros to the former deputy head of the armaments department of the Greek Defense Ministry of Greece, Antonis Kantas. In exchange for this amount, he should not have interfered with the contract for the supply of the Greek army 24 systems PzH 2000. ” As Der Spiegel magazine later wrote, the Munich prosecutor’s office began a preliminary investigation into possible corruption when KMW sold heavy armored vehicles to Athens. This was also the result of Kantas’s recognition of accepting a bribe when he bought 170 Leopard 2 tanks.

The Munich prosecutor's office was not particularly in a hurry. She carried out actual investigative actions (the seizure of documents at KMW headquarters) only in the late fall. That thing is over. Scandal slowly hushed.

Be that as it may, the French with the production of "Leclerc" exhausted in 2010 year. The Germans continue to issue "Leopard" for specific contracts in small batches. Until now, KMW competed fiercely with Nexter. So, in April 2013, the German concern defeated the French by winning the contract for the supply of Leopard-62 tanks to QNUMX.

The crisis in Ukraine spurred demand for Krauss-Maffei Wegmann tanks. Reporting agency Reuters refers to the statement of the head of KMW Frank Haun. “The reason was the guaranteed Ukrainian crisis,” the agency quotes the words of a German industrialist. “More applications for supplies came from Eastern Europe and Scandinavia.” And although Juan refused to disclose details related to the new orders of the concern, it became known that demand increased mainly for the main battle tank Leopard-2.

Tank for all of Europe

Why did KMW decide to merge with Nexter? There are several reasons for this. Firstly, the Russian Armata, which was released for the festive parade, encouraged not only the design ideas of European tank builders, but also the ambitions of politicians and industrialists. Until now, attempts by Europeans to develop a joint tank and to begin its production have failed. Now Krauss-Maffei Wegmann has taken the lead. This, in particular, confirms the news agency DPA. It calls the goal of the unification: the standardization of European weapons.

Secondly, in the current situation, KMW has the sense to eliminate its main rival on the continent. Especially since Nexter is not doing well. However, the French are able to delay the forces and funds to create a new generation of combat vehicles. Therefore, instead of combining the German concerns, the Franco-German version of the merger appeared. It will eliminate the competition of new design developments.

Will the French win from this? At least, it was announced that the merger of concerns would not lead to job cuts, and this is already a plus for the crisis French economy. However, the main prize of the agreement will go to the German Krauss-Maffei Wegmann.

On the eve of the deal, German politicians became concerned with the "excessive influence of the French side in the new enterprise." Arnold Rainer, the authorized representative of the SPD in the Bundestag on defense issues, spoke directly about this.

In the Ministry of Economics of Germany, the doubters calmed down. They stressed that "an alliance with foreign partners does not relieve German manufacturers of their obligation to adhere to strict standards in force in the German defense industry." In other words, the new concern will operate according to the German rules, and the talk that the merger of companies "will allow them to expand the range and strengthen their positions in regional markets" is nothing more than a figure of speech designed for the French. A tank for Europe will be created under the leadership of the Germans and on German conditions, which was confirmed in the German economic department.

All of this organically fits into the current Chancellor’s policies, which Yoshka Fisher defined as a course towards “German Europe”. Now EU officials are actively promoting the idea of ​​creating a united army on the continent in return for NATO. It will not happen tomorrow, but it is necessary to prepare. So the Germans were quick to take over the development and production of the main battle tank, rightly counting on the dependence of the new army on those who would equip and arm it. That is from Germany.