October 28 2011
4
After the United States and the USSR developed the first nuclear bombs, the development of this type of weapon went in two directions. The first of these was “weighting” - increasing the power and creating new delivery vehicles, which eventually led to the emergence of strategic ballistic missiles and charges, whose destructive abilities are beyond common sense. The second way, which is already half-forgotten today, is to reduce the size and power of nuclear devices. In the United States, this path was crowned with the creation of a system called the "Davy Croquet" and fired with small nuclear shells.


The only possible delivery vehicle for the first nuclear bombs developed in the USA and the USSR in the 40s of the XNUMXth century was heavy bomber aviation. Meanwhile, the military dreamed of getting a nuclear weaponthat could be applied in the field, without the use of heavy aircraft. For this, the dimensions of the bombs had to be significantly reduced. Already at the end of the 1950s, significant progress was noted in this area. The first nuclear weapons, which managed to be placed inside the artillery shell, appeared.

At the same time, the first nuclear guns were rather cumbersome and cumbersome in order to use them with sufficient effectiveness during combat operations. Instead of dragging the huge artillery systems that were needed to launch tonnage shells into combat positions, it was much easier to use conventional bombers. However, by the beginning of the 1960-s, the size of nuclear charges was reduced so that they could shoot from ordinary field howitzers. It was then that nuclear weapons became a full-fledged part of the tactical type of weapons. 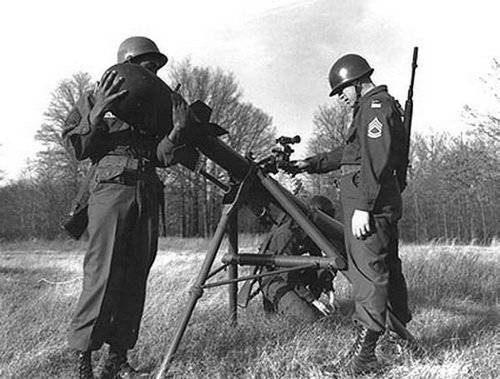 The limit of minimization and simplicity of the nuclear artillery systems ever developed was the recoilless Davy Crockett cannon created in the US in 1961. This development was based on a primitive recoilless cannon that fired projectiles based on the W-54 nuclear munition. The use of recoilless layout significantly reduced the firing range, while allowing you to completely get rid of recoil, making the gun stable, speedy and quite easy to use.

"Davy Crockett" (an American politician and military leader who lived in the 19th century and became a folklore hero) is an ultimatum of the tendency of the ground forces to be saturated with tactical nuclear weapons. In fact, it was a battalion-level tactical nuclear weapon. According to 2, such guns were included in the composition of motorized infantry and airborne battalions. This weapon system consisted of two launchers - M28 and M29 and the M388 nad-caliber projectile. The projectile had a caliber of 279 mm and a weight of about 34 kg, its adjustable power ranged from 0,01 to 0,25 kilotons. The projectile could be used in both installations. The main damaging factor of this nuclear weapon was penetrating radiation.

The M28 and M29 launchers differed in caliber. The first had a caliber 120 mm., The second - 155 mm, and they also differed in weight - 49 and 180 kg. and the firing range - 2 km and 4 km, respectively. Easier installation - М28 - was intended primarily for arming the airborne units. At the same time, an externally attractive system had a number of unrecoverable flaws. In particular, low shooting accuracy (dispersion when shooting from M29 to the maximum range reached about 300 meters), an insufficient range, and, as a result, a high probability of hitting own troops. This was the reason that the system, which was put into service in the 1961 year, lasted in the army of all 10 years and was removed from service in the 1971 year.

In appearance, the installation shells most resembled an oblong melon with small stabilizers. With 78 sizes on 28 cm and weight per kilogram 34, the projectile was too large to fit inside the barrel. Therefore, it was attached to the end of the metal rod extending into the trunk. 120-mm installation allowed to throw such a “melon” on 2 km, and 155-mm analogue on 4 km. At the same time, the system was easily installed on any mobile chassis, including an army jeep. If necessary, the crew could quickly dismantle the gun from the machine and put it on a tripod.

Under the main barrel of the recoilless gun was fastened 37-mm gun, which serves as the sighting. It was necessary to calculate the trajectory of the shot (after all, you don’t shoot at nuclear weapons). Of course, the variation in firing over long distances could exceed 200 meters, but this was compensated for by the power of the charge and penetrating radiation. Immediately after the shot, the crew was supposed to hide in the nearest folds of the terrain or in pre-dug trenches in order to protect themselves from the damaging factors of a nearby nuclear explosion. The bomb was detonated using a timer, which had to be set before the shot in such a way that the tactical ammunition would explode even in the air, above the target. This significantly increased the damaging ability.

Less than one minute after the shot, the projectile was undermined over the affected area. Today, little is known about the internal structure of this projectile, but, most likely, it contained a piece of plutonium in a beryllium shell 12-kg. During detonation, a special blasting charge, using carefully calculated shock waves, created a cavity in the center of the plutonium charge and pressed the radioactive material, triggering a nuclear reaction. Beryllium coating increased the effectiveness of weapons, reflecting the production of neutrons back into the work area, which allowed them to split as many nuclei as possible. Such an increasing chain reaction made it possible to generate colossal energy.

Each person within a radius of 400 meters from the epicenter of the explosion of a given charge, almost inevitably perished. Those who were within a radius of 150 meters received such a dose of radiation that they died within minutes or hours, even if they were undercover tank armor. People at a distance of 300 meters from the epicenter experienced nausea and temporary weakness, which quickly passed, but this was a deceptive phenomenon, in a few days they would die a painful death. Those who were lucky enough to be at a distance of more than 400 meters received better chances of survival, but many of them would require intensive treatment, and someone could not get rid of the wounds received. People who were more than 500 meters from the epicenter would be lucky to avoid most of the damaging factors of the explosion, but subsequent mutations in their DNA could eventually lead to the development of cancer. 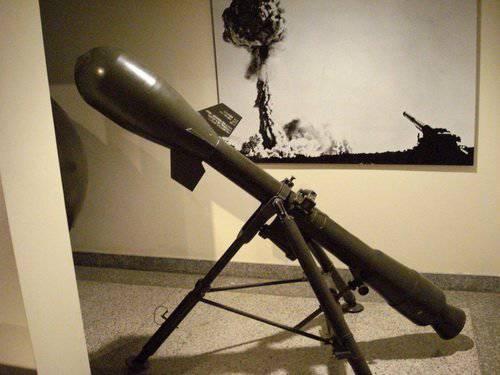 The timers that equipped the shells of the recoilless Devi Crockett guns made it possible to carry out a blast even at a distance of 300 meters from the launch point, in which case the gun itself was also killed. But such an application was considered only as a last resort. The approaching troops of the Warsaw Pact member countries were planned to meet at a distance of 1,5 km, which excluded the possibility of destruction of the weapon’s calculation by radiation. Even if the inaccuracy of the installation led to insignificant losses among enemy troops, radioactive contamination of the area would make it impassable for at least 48 hours, which would give the armed forces of NATO a mobilization and regrouping time.

The main purpose of the "Davy Crockett" was the opposition to Soviet tank columns, which, according to Western strategists, could attack Western Europe at the beginning of World War III. Special combat groups were equipped with these recoilless weapons, which were on duty at the borders of the Warsaw bloc countries in the period from 61 to 71 years of the last century. In total, around 2 000 of such guns were deployed throughout Europe. However, at the beginning of the 1970s, the parties came to the conclusion that full-scale hostilities between them were apparently impossible, and small nuclear charges quickly lost their meaning. All this led to the decline of the "Davy Crockett", for the conduct of wars in the third world countries, conventional weapons were quite enough.

In addition to the fact that the "Davy Crockett" was the most miniature nuclear device created in the United States, it became the last nuclear charge that was tested in the atmosphere. A pilot experimental launch of 1962 of the year, conducted in the Nevada desert, confirmed the effectiveness of the idea embedded in it. With the destructive power of 20 tons in TNT equivalent and the size of a melon, it would be extremely difficult for anyone to circumvent this ammunition in terms of the destruction efficiency per 1 cubic centimeter of volume. Moreover, even such a small ammunition could launch such a chain reaction, which could lead to the complete disappearance of humanity.