What can be considered the very, very first tank?

August 3 2015
7
From the course of cultural studies it is known that every phenomenon, including in the field of technology, is in its development five (yes, as many as five!) Stages. The first is the birth, when nobody else seriously looks at the subject. The second is when a phenomenon or object is already sufficiently known, but is, so to speak, in the process of development. The third stage - innovation dominates and becomes commonplace - “oh, who did not know this!” The fourth stage - it becomes obsolete, dies out and is replaced by something new. Fifth, it exists on the periphery of social development.


And so, based on this point of view, is it possible to consider that the war chariots of the ancient eras, be they the chariots of the ancient Egyptians, Assyrians, Chinese, and peoples of the “Steppe Corridor” - these are the forerunners of modern tanks? Most likely, it’s impossible and that’s why. Even in cases where the horses of these chariots had protective blankets, the protection of the warriors on these chariots remained individual, not group!

A war elephant is an “antiquity tank,” yes or no? And again the same problem: an elephant in armor, but his “crew” was often located openly, although descriptions of the “bound towers” ​​on the backs of war elephants are known. That is, it is most likely, all the same, the BTR, and, in addition, also the BTR without a roof. After all, the collective weapons the warriors on the elephants, too, was not. They were armed with spears, throwing disks, muskets (in the army at Aurengzeb), bows, but they could not even afford a small cannon, because the elephants were afraid of loud noises. 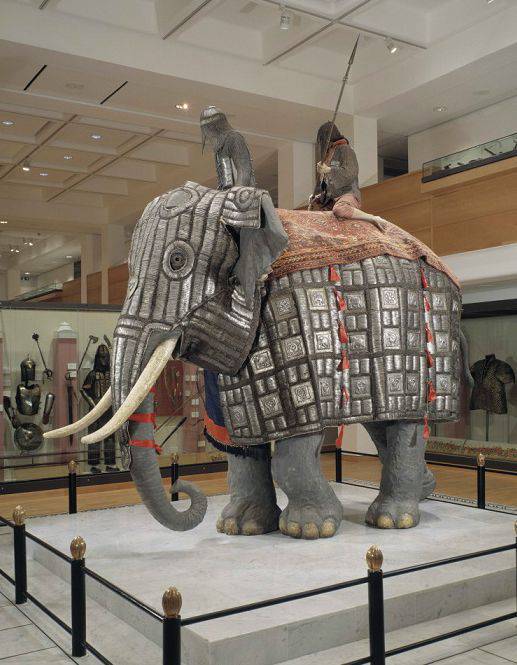 The Great Mogul War Elephant from the British Weapons Museum in Leeds.

There is a point of view that the prehistory of the tank begins in the XIV century, since we have reached the drawings of an engineer from Sienna called Mariano to Jacopo (aka Mariano Taccola), depicting a strange construction called “Fighting Unicorn”. The device was a kind of dome that covered a small group of warriors, but they had to carry it on themselves. The collective weapon was the horn of this monster intended for the ram of the enemy troops, but it was unknown what the means of observation were on it. 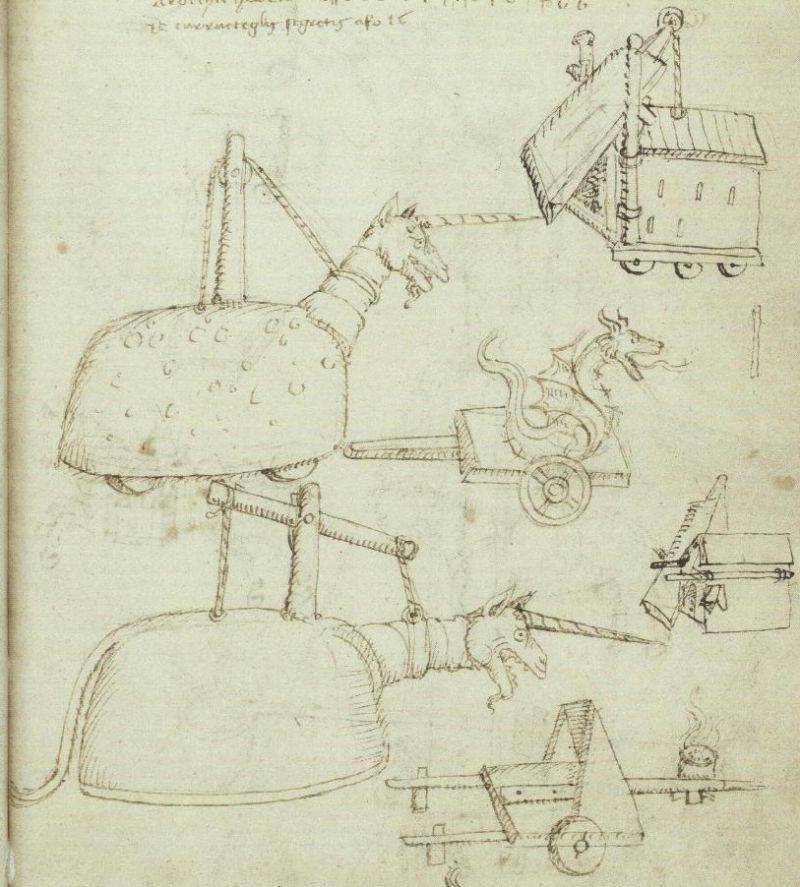 As can be seen from the image of his car in the figure, one version had wheels, but the other one was worn by the “fighters”. And the horn could be raised and lowered. Probably it was provided for security.

In 1456, wooden war chariots appeared in the Scottish army, set in motion by a pair of horses inside them. But ... there was a problem with the roads. And it is clear that the power of the living engine was also insufficient and the inventors understood this. Could try to use the wind. And it is not surprising that the idea of ​​a wind turbine was the basis for several projects of combat vehicles at once. In 1472, one such project was proposed by Italian Valturio, but Simon Stevin (the Netherlands), without further ado from the evil one, came up with a small sailing ship (1599) on wheels. I must say that the project Valturio turned out more interesting: on the sides of his wagon, he proposed to arrange the wings, like a mill. The wind had to rotate them, and they would set the cart in motion through gears. Needless to say, if such a machine had been built, it would certainly have made an incredible impression on contemporaries, but how would it drive around the uneven battlefield is a question. 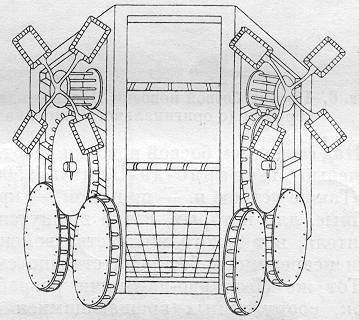 Well, it is not known to anyone that the great Italian artist, scientist and engineer Leonardo da Vinci worked (1500) on the creation of the battle carriage. “I will also arrange,” he wrote, “covered wagons, safe and unapproachable, for which, when they crash with their artillery into the ranks of the enemy, there is not such a multitude of troops that they would not break. And the infantry will be able to follow them safely and unhindered. ” This text has become a textbook, but what is interesting is that, according to the drawings that had been preserved, they started to make this car, it turned out that one gear wheel was missing there, and it would not go without it. That is, either Leonardo did it specifically, or simply misunderstood something. Leonardo da Vinci also designed wooden equestrian equipment, armed with rotating sickles. In some, the horse was in front, in some - in the back, but this, of course, was by no means tanks.

There is a curious hypothesis expressed already today that the “tank” of Leonardo actually had a muscular drive because it was not designed to move around the battlefield, but had to play the role of a mobile tower on the walls of the fortress. In this case, the wall played the role of a “highway”, along which, guided by parapets, it had to roll back and forth and come to the aid of the attacked section. However, Leonardo himself said nothing about it ... 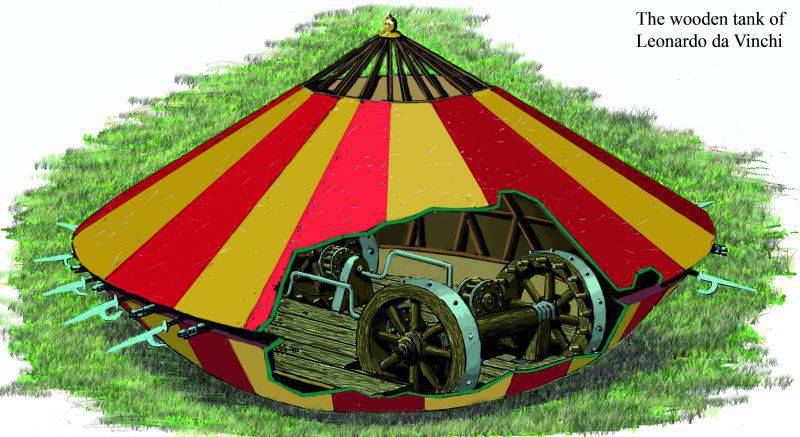 Tank Leonardo, modern reconstruction based on the drawings of the great master that have come down to us.

In 1558, Holypuer (Germany) proposed a draft of a mobile fortress, armed with artillery, which he called the “walking-city”. However, nothing new, in fact, his project did not contain, since our Russian "walking-cities" and the Hussite "Wagenburg" were similar too. The latter, however, could only participate in a field battle as a stationary fortification (this is sort of like a tank tower, removed from the chassis and buried in the ground as a long-term firing point), but they could move from place to place and have collective weapons and collective means of protection. 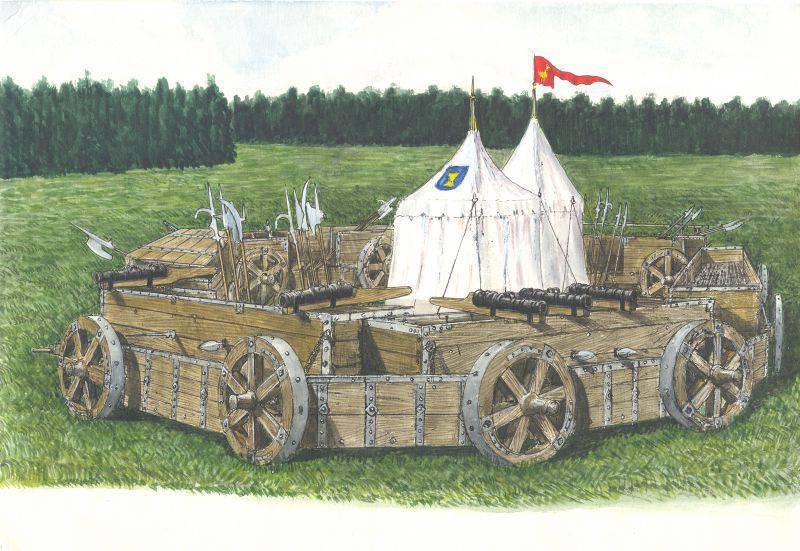 [/ Center]
The camp of the Hussites.

In 1588, the Italian Augustino Ramelli went the furthest - he offered a wagon, protected and armed with guns, which could cross the moats filled with water. It was equipped with paddle wheels on both sides of the hull for movement in water - an amazing engineering solution for that time. But whoever would rotate these wheels ... 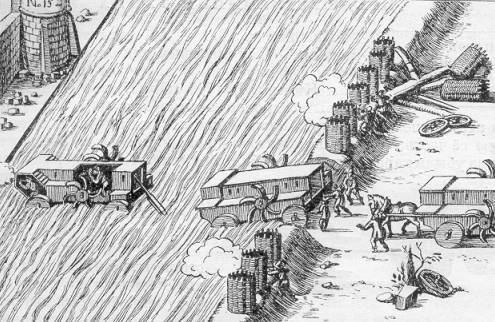 Probably, then there were other proposals, until finally Voltaire himself offered his “tank” to Catherine II. In August, the 1769 of the year between him and the Russian ruler began, so to speak, a “creative correspondence” from the content of which it can be concluded that Voltaire, considering that because in the upcoming Russia war with Turkey, the Russian troops would have to act on the plains an improved type of war chariots! He even sent her drawings of his cars, and she seemed to be instructed to build them. But what happened next about it история he is silent, but there is no information about the actions of Voltaire’s “tanks” in battles. There is no information about them in the subsequent letters of Catherine to Voltaire.

By the way, military engineer Nicola Joseph Cugnot (1725 - 1804) in 1771 built three steam vehicles, one of which was intended for the transport of guns. Voltaire probably knew about the testing of these machines in Paris. And it would be enough to combine these two inventions of Voltaire and Cuño in order to get at least something remotely similar to a tank. But that never happened.

But the Japanese after the Meiji Revolution created their own "mechanism", considered a prototype of the tank, although it was still on horseback. It was an armored tower with embrasures, which could be removed from the chassis and used as a bunker. However, firing through the embrasures was possible on the go. So there is armor (collective protection), although here all the weapons are also individual. So this is no tank! 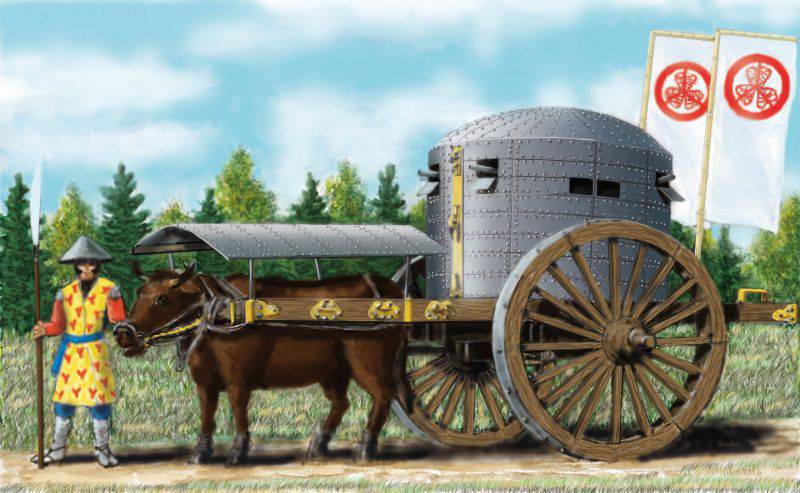 "Agami gurum" is the "divine machine" of the Japanese.

And again, Frederick Simms' car is a “car,” a BA, but in this case, too, the tank and the palm will remain for “Little Willie”, even if it didn’t get to the front!