July 31 2015
50
The political campaign against President Poroshenko has every chance of being crowned with success. A coalition of ultranationalist forces was formed, including the Right Sector, the radical Lyashko, the “Fatherland” of Tymoshenko and others, smaller, who no longer hide their goal - the displacement of Poroshenko. Kolomoisky with his “Dill” returned to the Kiev proscenium, which means that the new coup has financial support. 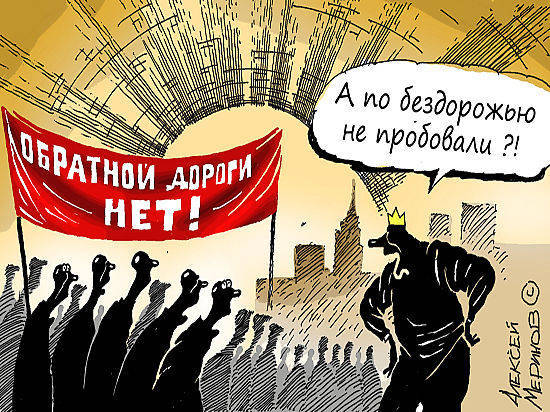 The very fact of the creation of the anti-poroshenko coalition suggests that President Petro Poroshenko has lost the support of Washington. And the US ambassador Jeffrey Payette will look through her hands at the preparation of a new coup, is already looking. Moreover, Jeffrey distanced himself from the new revolutionaries: in Mukachevo, he said about the so-called “Right Sector”. It seems to be not very imagining what kind of organization ... It seems that the United States is preparing to say that they have nothing to do with the upcoming events, and are not responsible for their consequences, they will again be called "unforeseen".

The Right Sector puts the most far-reaching goals: it talks about the continuation of the “Ukrainian revolution” through organizing a referendum to “destroy the system of internal occupation” under the slogans “Down with the power of traitors!” And “Ukraine above all!” The success of the nationalist revolution will lead to the establishment of a frank neo-Nazi regime in part of the territory of the former Ukraine: the world has heard these slogans in Nazi Germany. And the final goal is the same - to start a war with Russia.

Other, more respectable Neo-Nazi Bandera forces, such as Batkivshchyna, are formally less radical, and hope to use the Right Sector, as in the February Revolution, as a ram. But their final goals coincide. How they share power after Poroshenko’s dismissal is important, of course, but not essential.

Basically, the new Bandera power will be frankly neo-Nazi in its essence, although it will continue to reject the accusations of “Nazism” publicly and continue the current policy of “they themselves are burning and killing”.

It is also important that with the departure of Poroshenko, the Minsk diplomatic epic will end, on which the truce in the former Ukraine was kept. “Minsk-2” is apparently a feature beyond which the support for the integrity of Russia’s Bandera Krajina ends: “Minsk-3” will not.

Sergei Lavrov has already warned: "We will not allow the revision of the Minsk agreements." Russia cannot afford to recognize the new change of government in Kiev, which will be openly Bandera-fascist, which will make it impossible for the Minsk process to continue.

Recently, during a visit to Slovenia, Prime Minister Dmitry Medvedev confirmed the “integrity of Ukraine with regard to the decision on the Crimea,” that is, within the framework of the Minsk agreements. And right there he compared Ukraine with Yugoslavia, which “few people remember already” among young people. That is, he admits that beyond the Minsk line, the further disintegration of Ukraine may begin.

It is also important that, according to Medvedev, “Russia has managed to stabilize the situation in the economy, to adapt it to the new conditions.” That is, to adapt the economy to Western sanctions, reorienting to eastern markets. This means that Russia is ready for a new phase of post-Crimean relations with the West. After all that has been experienced, Russia is unlikely to return to Western markets in the same volume.

On 25 October, local elections are scheduled for Banderia, roughly speaking, after three months. This is a significant period for the preparation of a new coup, which, in case of success, can be called the “Bandera revolution”. We should not forget that the leader of the “Right Sector” Dmitry Yarosh is an ideological revolutionary and fascist, he is the author of the work “Ukrainian revolution”, so he can, under certain circumstances, get out of control of his American curators.

On the other hand, Yarosh is not at all alone in his revolutionary-fascist struggle. This is what says, for example, Andrei Tarasenko, deputy. head of the PS on socio-political work: "We are nationalists, and we need not separate posts, but all ..."

External managers of Banderia forget, although, perhaps, and vice versa, they expect that every coup, or revolution, contains a spontaneous, irrational element that can break free, and then uncontrollable revolutionary elements spill over into the country. That is, the "controlled chaos" of democracy can always be translated into the "uncontrollable chaos" of revolution. Allegedly, it is always “unforeseen”, according to statements by Western politicians: the element de pulled out ... But it can really break out in the former Ukraine.

The revolutionaries and revolutionaries hope, of course, for their victory, but the revolution of the “Right Sector” can end with the closure of the Ukraine project. This is what its functionaries say: “It will not work to hold a referendum, we will create our CEC, we will vote by region”. This is the way, in general, to the proclamation of the "Republic of Galicia" ...