July 31 2015
45
No, and do not argue, the funniest phrase I've heard over the past year (where every KVN and Petrosyans are!) Is the phrase Poroshenko’s usurper on the “celebration of the death” of Vladimir the Red Sun.

Agree, the phrase "And we have shone the light of reason" from the director of the Ukrainian madhouse - this is epic. 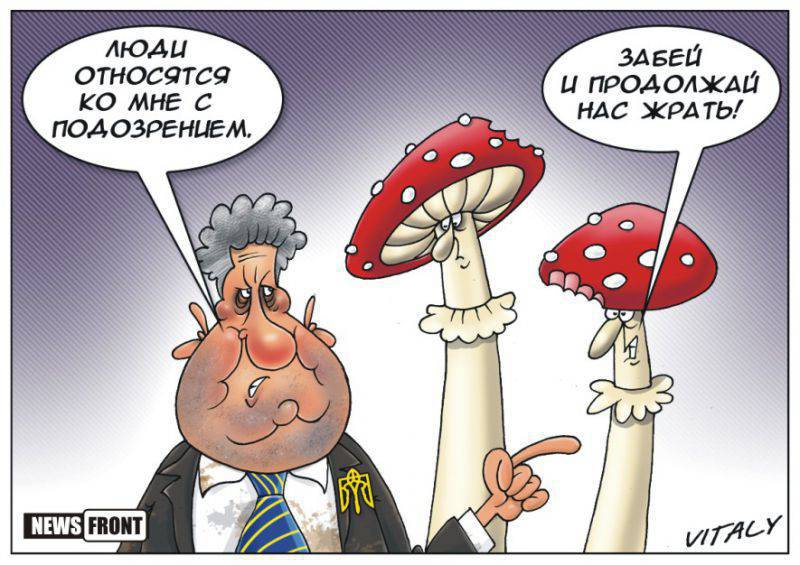 But what the hell is the director? So, Zits-chairman Hryunt under the present vicar - Jeffrey Payette. The whole essence of the Ukrainian nationalists and “non-zalezhnikov” a few years ago was issued by Mr. Rybachuk, saying that “if Karl XII had won the Battle of Poltava, then we would live near Sweden”.

Oh, this is a Galician sado-maso, a slave dreaming of a master of stricter. Of the Russian bad owners, they are equal to the Ukrainians, the brothers believed. Here are the Swedes, the Germans or the Americans - this is another matter. You can drop voluptuously to the master's boot and lick, lick, lick ...

And now Poroshenko's impostor, the “president of the world”, kneeling and throwing a crocodile tear, asks the gamers of the gamers to send him 1240 “Dzhevelinov”. Although Wikipedia tells us that, most likely, such a number of them does not exist in nature (in the US Army there are only 950 units in service, and in other countries there are orders of magnitude smaller, in a couple dozen).

And even if they had given them, then their further fate was predictable - half of them would be sold to Iraq by ISIS militants, the second half would have been seized by the militia of New Russia. As it was with the widely advertised SAU 2C7 "Peony", three of which were restored from the warehouses of the Armed Forces of Ukraine, after which one was destroyed and two were taken as trophies under Debaltseve.
However, we are about the "light of reason shone." Just tell me in which madhouse you can talk about Russian aggression and at the same time ask for urgent supplies of electricity from Russia (such as an “aggressor”), because they themselves have no coal (and this is the middle of summer!) And, moreover, imbeciles from “volunteer »Battalions shot large thermal power plants?

Or in which madhouse praising Hitler Bandera as Georgy Tuk can simultaneously say "We have reached Berlin, and we will reach Rostov"? Your ancestors in Berlin could only be as Ostarbeiters or saboteurs in the Abwehr intelligence schools! On the last days of the pratsyuvaty guards in concentration camps ...

So why all this "shone the light of the mind"? And to celebrate (!) The death of Prince Vladimir, the Baptist of Russia. At this celebration, Pan Poroshenko, who not long ago was shouting hysterically "Orthodox Bitch," talked about the historical deed of Vladimir.

And long and tastelessly talked about the "European choice" of Prince Vladimir. He himself understands what nonsense carries, but can not abandon his official mythology. Ukraine is not going to take in the EU. Ukraine does not give a visa-free regime. Ukrainians do not even give a visa to the EU. Nobody needs Ukraine in the EU. Ukraine did not receive any benefit from European integration, only losses. But, as the well-known meme says, “You can’t just give up the illusion of European integration.”

And, when we two years ago directly warned: there will be no EU membership, there will be no visa-free regime, there will be no increase in wealth, there will be no Western investments, the eurolomics are not listened and continued to ride. However, they still obediently continue to eat this foul, ahem, guano.
Poroshenko, a “beacon of reason”, spoke about Vladimir's European Christian values. But Europe (that part of it that the Piglet sings about) is Catholic! And during these centuries, she has repeatedly sent her crusades to the Orthodox world, beginning with 1147, continuing with the Northern campaigns and never, by and large, ending her attempts to conquer and enslave the Orthodox world.

Poroshenko mumbled something about the fact that "Vladimir is a Ukrainian prince." Did Vladimir know about this? Is there any mention of Ukraine of that period? Is there at least one chronicle "Vladimir, Prince of Ukraine"? No such in storiesand never was.

You, mankurts, have no family, no tribe, no history. Everything you invent, everything you lie. And nothing is built on a lie, from a lie everything just collapses. You have neither history nor spirituality.

But you, Valtsman, you will never even pronounce the name of Bogdan Khmelnitsky. Because Zinoviy Bogdan Khmelnitsky, a Russian colonel (as he himself wrote “hereditary Russian szlachtich”), such “European integrators” like you hung on the nearest aspens.

And bequeathed "Forever with Russia." And you, mankurts, the ancestors' covenants sold for American cookies.

Prince Vladimir was Russian. You would, Pocia, even read the history, for a change! Vladimir was the prince of Novgorod, and Kiev took the force. However, as the Novgorod princes did it before and after it.

You are not a tree, you have no roots. You are a projection of delirium on the water, and your crazy mythology is crumbling, falling apart in the same way. One has only to blow the slightest breeze ...
Orthodox you writhe yourself. To Vladimir wriggle. And who are you? Dummies are hypocritical, but sui puppet occupational administration.

I will tell you what you are "Orthodox." Roman Nikolaev, an Orthodox priest who was shot by your Nazi geeks, died in Kiev today in Kiev.

Today in Kiev, the 64-year-old nun of the Kiev Ascension Florovsky Convent Alevtina is murdered. She was found killed with traces of violence: her arms tied, all her ribs broken, all the internal organs injured.

Here you are "peacemakers", "legitimate authorities", "Orthodox" and "patriots".

"Shone the light of the mind"? Yes, darker for several centuries was not!