Project "ZZ". America is saddened by the poverty of the Russian people and the oppression of Chubais

July 29 2015
107
Russia cooperated with the West to reach a nuclear agreement with Iran, but the deal brought oil prices down. At the same time, a weak domestic demand for gas and a reduction in the export market hit the raw materials economy of Russia. Citizens of the country suffer from a falling ruble exchange rate. The American Interest thought about what will happen after Putin’s departure, and The New York Times is worried about the fate of Chubais: it is oppressed by the siloviki in Russia.

The article by Nick Cunningham ("The Christian Science Monitor") talks about "serious economic and financial threats" for Russia. The Kremlin probably thought that the difficulties were left behind in the spring, when oil prices began to rise, but the market went down again. And this does not bode well for the country, the browser believes.

Russia faced a massive financial crisis: low oil prices are combined with Western sanctions. A country that gets about 50% of its budgetary revenues from the sale of oil and gas, a sudden collapse of oil prices could plunge the bottom of the crisis.

Russia decided to cooperate with the West in a “nuclear deal with Iran,” the author writes. However, the deal "contributed to the fall in oil prices," since markets are now expecting Iranian oil to enter the world market "over the next few months." True, there are benefits from the deal: it opens up business opportunities for Russia in Iran. Geopolitics is also mixed up. Cooperation with the West was appreciated: President Barack Obama even thanked President Vladimir Putin for his help. This, the author believes, can make some kind of contribution to the lifting of Western sanctions against Russia. However, the withdrawal "can not happen soon enough."

Meanwhile, Russia's foreign exchange reserves are being depleted: they have shrunk from 524 to 361 billion dollars, or even more.

Gazprom has major problems: natural gas production is falling, aided by weak domestic demand and a reduction in the gas export market. As a result, Gazprom’s production volumes fell by 19% in June compared with the same month in 2014.

But Gazprom gives 10 percent of Russia's economic activity. Therefore, the problems of Gazprom are a disaster for the entire Russian economy.

Here are some more indicators: the production of Gazprom fell by 12,9% in the first half of 2015 of the year (year on year). The Russian gas giant could get a total 106 billion in revenue this year. For comparison: in 2014, income was 146 billion dollars. Revenues are lower by almost a third, the journalist said.

The Ukrainian crisis also went sideways to Gazprom. The conflict over gas prices, not to mention the confrontation, forced Kiev to look for alternative gas suppliers. If in the 2014 year, Ukraine depended on Russia for three-quarters of the gas supply, then this year this share decreased to just 37 percent (Sberbank data). Now Ukraine receives the main flow of gas from the “European neighbors,” the author writes.

Moreover, Europe itself, albeit slowly, does a lot to diversify gas supplies. Therefore, Russia's prospects in the EU market are vague.

The Chinese turn for Russia is also doubtful. China and Russia announced a series of commodity transactions in 2014, including the construction of a pipeline network for exporting “huge volumes” of gas. But after all, China's economy is slowing down, as evidenced by the collapse of the stock market in June. Be that as it may, the demand for energy in the Middle Kingdom is declining. As a result, China and Russia “put off indefinitely” the western route of the Power of Siberia pipeline, the columnist writes. And this complicates Russia's plan, aimed at replacing European energy consumers with Asian ones.

Economic problems this summer are growing like a snowball. The ruble exchange rate, which recovered slightly in the spring after the winter fall, again rapidly went down. Things are going badly in the regions: debts are growing in the regions, expenses exceed revenues. Approximately two dozen of the 83 regions of Russia are more or less in a state of "default," says Nick Cunningham.

Julian Hans in a Swiss newspaper "Tages anzeiger" notes that in Russian life the word "sanctions" has become synonymous with the new confrontation with the West. Now food in stores is becoming more expensive, but patriots can buy T-shirts with Putin and with nuclear missiles signed: "Iskander" are not afraid of sanctions. " 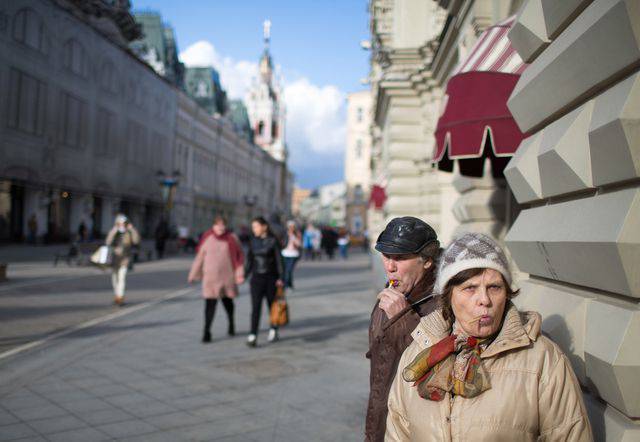 Europe’s sanctions have strongly affected the Russian population: food prices are now biting. However, counter-sanctions, that is, the embargo imposed by the Kremlin on food from countries participating in sanctions against Russia, are even more widely affected. Broad masses are especially concerned with the constant increase in prices. According to Rosstat, products in 2014 were up by almost 17 percent. Since then, prices have steadily increased. Real incomes of Russians also fell significantly, says a Swiss journalist. And once buyers save, manufacturers do the same: for example, they replace the ingredients in food with cheaper ones - the milk in the cheese is replaced with vegetable fat.

And this is no longer the result of Western sanctions, the author believes, but the result of the “Russian embargo and weak ruble.”

To abandon globalization from Moscow simply and quickly will not work. Here is a simple example: 80% of potatoes in the Russian Federation are grown from seed and with the help of fertilizers purchased abroad. And once abroad, for the currency, reminds the analyst.

Against this background edition "The American Interest" develops the theme of “Putin’s departure”.

As Andrew Wood writes, sooner or later the power in the Kremlin will change. And the West should consider the likely consequences.

There is a widespread assumption: when Putin leaves, a similar ruler will replace him. The system as a whole will remain.

The authors (including Andrew Wood) of the “Russian Challenge” report, published by Chatham House, believe that the West should consider the consequences of a possible change of leadership in Russia. Analysts cite several factors that need to be taken into account: a) the policy pursued by Putny after his return to the Kremlin in 2012 significantly narrowed the possibilities for constructive interaction between the West and Russia; b) there is no indication that Putin recognizes the need for economic reform; c) his statements at the St. Petersburg Forum last month were based on the controversial statement that Russia had already gone through the worst; d) the Russian bureaucracy is unable to conduct liberal economic reforms; e) Putin is not going to conduct judicial reform, not to mention political modernization. The author concludes: Putin is "afraid of change."

Next, the analyst draws parallels between Russia and the USSR today. The Soviet Union collapsed for subjective reasons, caused by the feeling that it had lost its way. And here there is something in common with Putin’s Russia, the author believes. "Heavy doses of propaganda of patriotism" are directed by the Kremlin only to maintain power.

As a result, uncertainty increases in the country.

Will Putin be replaced by someone similar? The author doubts. If Putin left now, then this option would be likely. But he is not going to leave. And for the future it is difficult to count: after all, the “heir” must enlist the support of Putin’s current environment. There are all conditions for the start of strife.

There is great uncertainty about what will happen if Putin "dies in the office." According to the constitution, Prime Minister Medvedev will come to power. It is also possible that Putin will appoint the future prime minister, however this person is unlikely to be free in the manifestation of political will.

The scenario in which Putin will be overthrown by a group of his current supporters seems, in the author’s opinion, unlikely. Many Russians fear that if Putin leaves, a new Time of Troubles will break out in the country ...

Along with the arrival of "uncertainty" in Russia, liberalism decreases. Sabrina Tavernyz in "The New York Times" worried about the fate of A. B. Chubais - "one of the most famous architects of the post-Soviet economic modernization of Russia, who came under attack by anti-Western hawks in the Russian government." 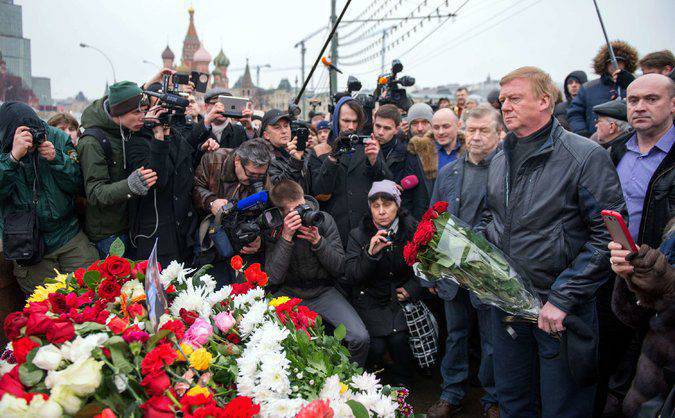 The campaign against Chubais is presented by the journalist as “the last effort of powerful Putin loyalists” to remove “liberal votes” from the public life of Russia.

Mr. Chubais, the author of the report reminds, is “attacked” through the pursuit of his current and former Rosnano colleagues, and first of all Leonid Melamed, the former manager of the company.

The Russian daily Izvestia, the author reports, wrote that Moscow businessman Dmitry Lerner sent letters to state investigators. The letters contain accusations of Rosnano top managers, including Chubais himself, of involvement in embezzlement of public funds.

According to the journalist, Mr. Chubais "despises the security forces", these "Putin loyalists", who came to power "from the secret police or the armed forces." These people find Chubais a “liberal symbol” of that era in stories Russia, when they lost power.

The heroes of the West are understandable: it was the late B. Nemtsov (not without purpose in an article in the New York Times about Chubais published a February photo), and A. Chubais, who is more alive than all the living. The “antiheroes” for the American media are Putin and his “siloviki”, oppressing the thinning supporters of liberalism and democracy in Russia - like Chubais, “one of the most famous architects of the post-Soviet economic modernization of Russia”.

They say Chubais invented nanoasphalt. Why don't they write about it in the New York Times?