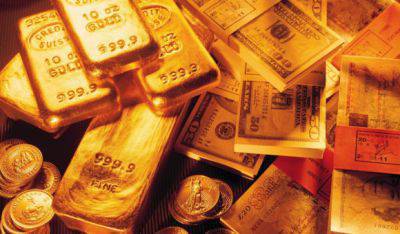 Leading Internet portals of Germany preoccupied with Russian gold and foreign exchange reserves. The online version of the most massive German tabloid newspaper Bild, for example, came out with the headline "Because of the love of gold: Putin lost 15 billions of US dollars". Similarly, the theme sounds on the site of the solid left-liberal German weekly Der Spiegel, the state-run television and radio company Deutsche Welle. In this case, all refer to the article "Fatal Thirst for Gold, Vladimir Putin," published last Saturday in the print version of the conservative newspaper Die Welt.

The meaning of all these clearly orchestrated publications comes down to almost the same general thesis: “The Russian president made a strategic miscalculation by betting on a significant increase in the share of gold in the gold and foreign exchange reserves of the Russian Federation, since the price of the noble metal will fall and will continue to fall.

The tone of the all-German theme was set by the authors of the article in Die Welt, the economic section of the newspaper Nando Sommerfeld and Holger Zszepitz. They scrupulously counted the Russian gold and recorded the result: from 2007, our country tripled its gold reserves - from 400 tons to the current 1275 tons. Only in the last month she bought over 24 tons. As a result, today Russia has the sixth largest reserves of precious metal in the world, second only to the United States, Germany, Italy, France and China.

By replacing the strategic thinking of school arithmetic, Die Welt, and with it the media who are connected to the topic, make a simple and accessible conclusion that "gold has gone out of fashion among investors", and therefore "before the eyes of Putin, Russian riches because of turbulence on commodity exchanges are increasingly melting. " So, an ounce is now worth less than 1100 dollars. This is the lowest level since March 2010. Only since the beginning of 2014, when “the Russian president, due to the Crimean crisis, fell into a state of downright feverish buying,” did gold fall by about one-fifth. "Gold will continue to lose value as a ersatz currency."

Before challenging the last passage of German journalists, I confess, I have been following the growth of Russia's gold reserves not so long ago - about three years. Since it has become obvious to attentive observers: Russia has transferred foreign trade to gold settlements. This happened after the dismissal of Alexei Kudrin, recognized by the Americans as "the best finance minister of the world."

Under Kudrin, the settlement scheme was as follows: oil, gas, and other resources were sold for dollars. Then they bought the so-called treasuries (IOUs of the US Treasury), thereby unclaimed budget dollars returned to the West, where our oil and gas had already gone. All in one gate.

After Kudrin, the calculations changed radically. Resources are still selling for dollars. They are buying up cheap gold, replenishing the state reserve. The bottom line is that oil and gas are sold for gold. This metamorphosis was not immediately noticed by the “investors”. Their reaction became speculative manipulations. They led to the fact that the noble metal became cheaper, and the currency value of the gold reserve fell. But the thing is that the physical volumes of the metal in the vaults of the country grew. And not expensive. For example, in the last crisis year, when, under pressure from sanctions, the domestic ruble jumped and shrank, the Central Bank bought more than 170 tons of gold in reserves. This, essentially one-time, share in scale exceeded the gold reserves of such countries as Australia, Sweden, Mexico, South Korea, further down the list. After all, only 25 countries in the world have more gold than what Russia bought in one 2014 year.

Russia is not alone in its desire to replenish reserves. In five years, neighboring Kazakhstan raised its reserves from 67 to 203 tons. During the same period, Turkey increased its gold reserves from 116 to 513 tons.

China stands out in this line. Five years ago, he stopped publishing official data on the status of his gold reserves. A simple comparison of the mined metal and its consumption on the market showed analysts that the Middle Kingdom is actively buying gold into reserves at a rate of up to 400 tons per year. Not so long ago, China refreshed official data. To the dismay of observers, in five years, its reserves have grown by only 600 tons. However, thoughtful analysts agree that "if you dump the entire volume all at once," it disorganizes the market. New numbers will be updated gradually. However, China will have to show the world the volume of its gold, because this year it claims to include the yuan in the pool of reserve currencies. The decisive factor in making this decision will be the volume of the country's gold reserve. That is, the same resource that German propagandists, enthusiastic about the criticism of Vladimir Putin, are so indulgent about today.

Himalayas of dollars and euros

You can understand them. “The second most significant global currency, the euro, Moscow,” writes Die Welt, “after the onset of the Crimean crisis, ceased to be regarded as an object of investment.” Here, as they say, the dog is buried. It does not suit the Germans that Russia has ceased to invest in their currency, and therefore, to finance the European economy. Meanwhile, things on the continent do not shine.

At the same time, when the German media were preoccupied with Russian gold reserves, the specialists of the International Monetary Fund published their opinion. They noted "the preservation of the difficult macroeconomic situation in the eurozone countries and stated that the program of printing money from the European Central Bank in the future may have to be expanded."

We are talking about the so-called quantitative easing programs, when an unsecured currency is emitted (put into circulation) to finance economic programs. I will not go into details of the use of these funds. Sooner or later they move into public debt. In the United States of America, it today exceeded $ 18 trillions. The European Union states have similar debt, only in euros, respectively. Is it a lot or a little?

On the web, I stumbled upon the calculations of mathematicians. They determined that a stack of $ 100 billion 1 dollar bills would occupy 1100 meters in height. It turns out that the highest peak of Earth Everest is equal to a stack of $ 8 billions. One can imagine these Himalayas poorly endowed with euros and dollars. Experts believe that, for example, the amount of US currency already exceeds all the total resources of the world.

It is hard to imagine. Easier to evaluate in small. Well-known economic observer Grigory Beglaryan recently gave this example. In 1998, a luxury house in the UK was sold for $ 54 million, and now for $ 547 million (refers to data from a company specializing in luxury real estate), and an exclusive Lamborgini car in $ 1998 was worth $ 750 thousand, and now $ 9 million. In other words, money has depreciated more than ten times. Financial bubbles were formed, which turned the world currencies into the very ersatz-money, for which German journalists accepted precious gold.

The fact is that speculative frauds with real assets, whether oil, gas or other raw materials, do not increase their physical volumes. Money is simpler, they can grow on virtual manipulations. This art has been mastered long ago, since the time of American Reaganomics. Heights it reached considerable. So much so that with the actual fall in the value of fiat (the face value of which is guaranteed by the state) money, real assets also fall in price.

It seems that the secret is simple. Such financial techniques are possible with the consent of all market participants and the lack of resistance of those whom financial manipulations create problems. Now there is opposition from the BRICS countries, Russia, and developing commodity states. It has preoccupied those who build wealth not on wealth creation, but on currency manipulations. Sensing a threat to their interests, they are releasing from the wings behind-the-scenes Klikush like the propaganda detachment of the German media.

Their predictions are loud, but not decisive. Serious analysts subject such conclusions to reasonable doubt. For example, Commerzbank's Karen Jones considers the current weakness of precious metals quotes to be “exaggerated” and predict a recovery in prices towards the end of 2015.

... However, gold is not a perishable product. This reserve is not valued by quarter or year. He has a long duration. Who remembers the market value of prewar gold now? But everyone knows: 2600 tons of precious metal in the reserves of the Soviet Union allowed the country to solve the most difficult task in its stories. It is a pity that the Germans began to forget about it ...