July 30 2015
12
With each passing week, more and more alarming talk arises in the media about Turkey’s possible invasion of northern Syria. The formal reason for the invasion is the fight against the Islamic State. The actual one is the neutralization of the Kurdish threat, and possibly a blow to the positions of Bashar al-Assad’s troops. Turkish President Recep Erdogan has already stated that Turkey will not allow the creation of a Kurdish state in neighboring territories. However, while Tanks have not crossed the border, Erdogan still has a field for maneuver. In the end, the invasion of Syria was expected last summer. Not the fact that it will take place now. 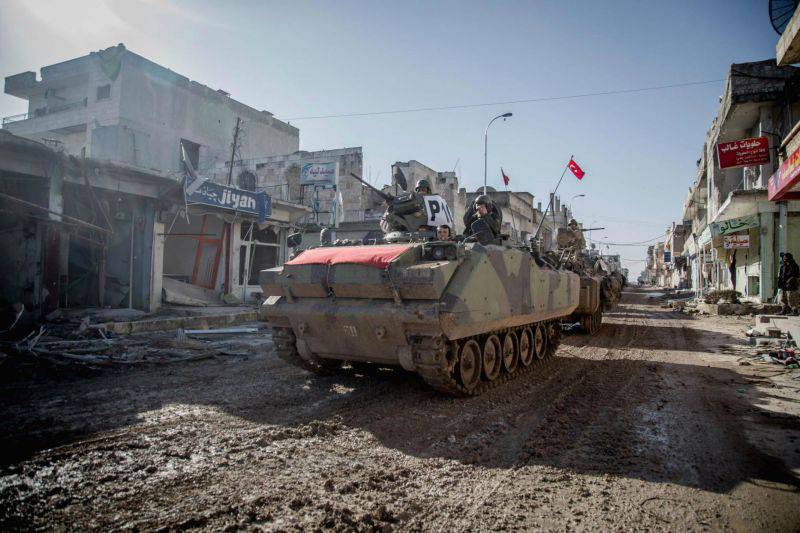 Literally in these hours, Turkey requires full support from NATO, citing the famous 4 article of the treaty. Even with the second largest army in the Alliance after the United States, the former empire is not sure of the success of the campaign, and there are grounds for that. Kurdish armed forces in Turkey have already responded to the bombing of their tribesmen by firing at police and sabotage. The border with Syria is actually a courtyard, and soon calibers and heavier ones may sound in those places. In order to avoid such a development of events, as well as to stop the possibility of creating a Kurdish state in the south, Ankara plans to deploy troops at least a hundred kilometers into Syrian territory. However, the Turkish strategists are well aware of what reception the invading army is waiting for, because for some reason they require help from the allies, who, being aware of everything, are in no hurry to help.

However, Erdogan doesn’t have much choice either. Tens of thousands of refugees and militant camps have already heated the situation in the border areas of Turkey to the limit. So the creation of a buffer from a neighbor, with the transfer of all problem objects to it, looks like a logical decision. Yes, and populism with nationalism has not been canceled.

Turkey wants expansion. The accession of Kars and the occupation of Northern Cyprus are glorious, but past affairs, long forgotten. The ruling elite needs more topical achievements and it is only a matter of choosing the direction of expansion. Say, 2004, against the background of the crisis of the Georgian state, the Turkish ambassador to Azerbaijan, Unal Chevikoz, explicitly stated that his country has the right to send troops to Adjara. But then there was no reason, and Russia was strongly opposed.

And now Syria. The demonstration of power, a beautiful picture on TV, the ratings of power are growing, the patriotic public is satisfied. True, ratings can crawl in the opposite direction, when it turns out that the occupation of such a problem area is expensive, dangerous, and frankly ungrateful. And to withdraw troops at all times was an order of magnitude more difficult than to enter them. Turkey returns to the land, from where it has once been expelled, and where absolutely everyone is not happy about it, regardless of nationality or religion. During a possible occupation, armed excesses are inevitable, which will only increase the hatred of the population towards the conquerors.

By the stated goal (the fight against the IG) what is happening in general will have a very remote relationship. The ruling Justice and Development Party in Turkey is largely responsible for the growth of Islamism in the region.

In general, the Turks now can only add their own couple of strokes to the overall picture of chaos. The modern borders of the Middle East were for the most part drawn from the results of the First World War. As in Europe (where the second major war began as a result precisely because of border disputes), they drew a political map casually, approximately and provocatively. The result came out quite predictable: eternal discord. Only if before Britain had the role of administering the frontier, then the United States would conduct the process on the basis of its own ideas.

It is beneficial for the Americans that capricious Ankara embarked on a war on frankly uncontrollable territory, wasting resources on it - and eventually came to surrender to the doorstep of the White House. So, in the first stage, Turkish aggression will be approved and even directly pushed to take a suicidal step. But most of all, of course, the Syrian people and the Syrian state, which is literally being pulled apart, will lose from what is happening.