Unusual tanks of Russia and the USSR. The first USSR missile tanks

October 27 2011
1
At the beginning of the last century, the development of rocket technology began, the founders of which were the Russian scientist Konstantin Tsiolkovsky (1857-1935), the Romanian - Herman Obert (1894-1989) and the US scientist Robert Goddard (1882-1945), who for the first time in the world managed to translate the theory on practice. He was one of the first to develop the installation of a barrel launch of rockets and already in 1925 created a working prototype, and in March 1926 carried out the first launch of a liquid-fuel rocket, which was used as liquid oxygen and high-purity gasoline. Of course, this invention interested both the military and the engineers and designers, the creators of the new models of military equipment and weapons. 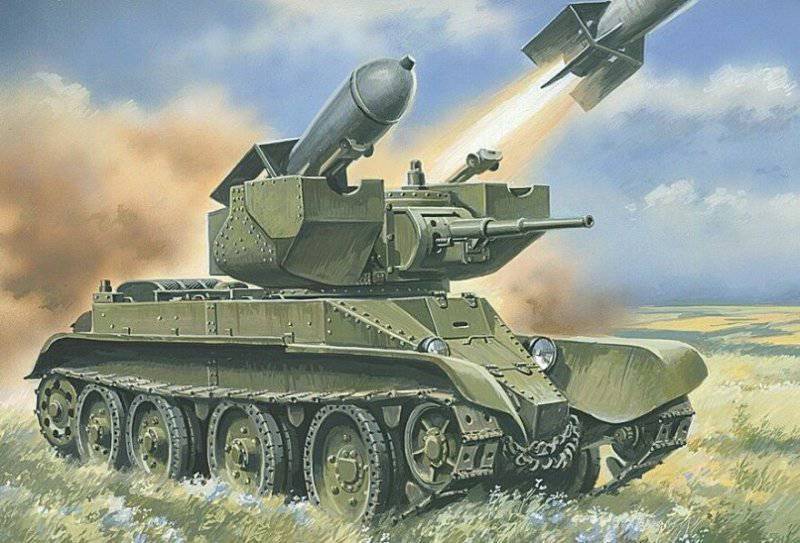 In the 30s of the twentieth century, many developed countries conducted experiments on installation on Tanks and armored vehicles of various types of weapons. Heavy mortars, mortars, howitzers and mortars were installed on combat vehicles. It remains to try to install missile weapons on them. The Soviet Union, being one of the powerful powers, whose government understood the inevitability of an imminent war, did not remain aloof from developments in this very promising direction that seemed then. The first missile firing at a distance of up to 1500 meters, which were successful, was carried out in 1932 at the Kuzminki firing range, according to their results, a decision was made to deploy this weapons on the tanks.
In the process of creating the first serial Soviet tanks, engineers looked for opportunities to increase the firepower of both future and existing models adopted by the Red Army. Weapons that allowed the tank to successfully fight with heavy and medium tanks of the enemy, with heavily protected and reinforced firing points (pillboxes and high-explosive equipment), were not yet installed on combat vehicles. One such opportunity seemed to be the installation on an armored vehicle, in addition to standard, various additional weapons, such as missiles. 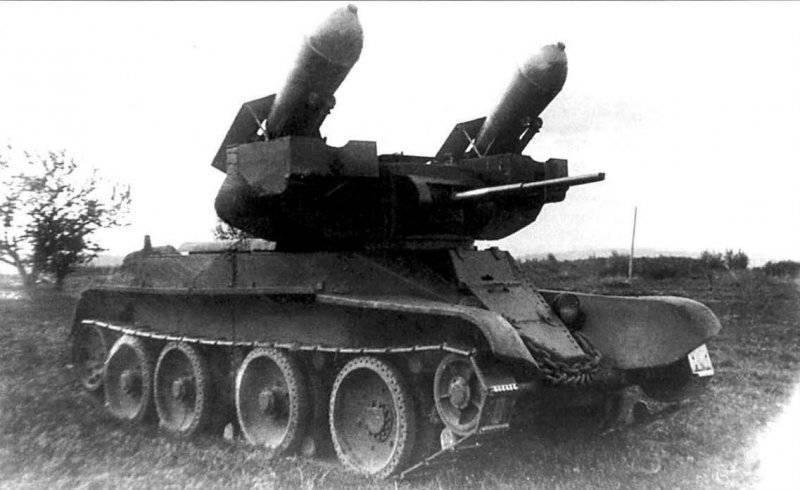 The first project aimed at the implementation of this idea was the RBT-5 project. The start of work on the project can be considered the task set in October 1933 by the head of the UMM RKKA A.I. Khalepsky military engineer Lebedev, to create an installation to accommodate two 250-kg missiles or, as they were then called, tank torpedoes on a light tank BT-5. At the end of 1933, the first prototypes of launchers for tank torpedoes were made at Plant No. 37. One of them was designed to launch only one torpedo, the second, which turned out to be more successful, was paired; for a short time, but already at the Kharkov Locomotive Works, it was installed on a conventional, serial tank BT-5. The launcher was placed on a tank turret, had the largest vertical pointing angle of up to + 48 degrees and included one feathered torpedo mounted on a rail on each side. The length of the rocket was 1805 mm, the largest (head part) diameter was 420 mm. The mass of explosive (BB) located in the front of the torpedo was 130 kg, in the tail section there was fuel - 13,7 kg. The standard armament of the BT-5 remained the same: 45-mm 20 K gun and 7.62-mm DT-29 machine gun. To carry out the shooting, sighting shots from a regular turret gun were first carried out, then, using a complex system of calculations and corrections, torpedoes were aimed. Electric igniters were used to ignite rocket fuel. As a detonator for explosives on tank torpedoes, a conventional detonator from aerial bombs was used, which, in the stowed position, was protected from accidental operation when bullets and fragments hit a small armor cap. But according to the test results, taking into account the short range of the missile, its extreme insecurity from bullets and fragments, the formation of a large unmasking cloud of smoke and dust after the shot, it was decided to stop further work on this project. 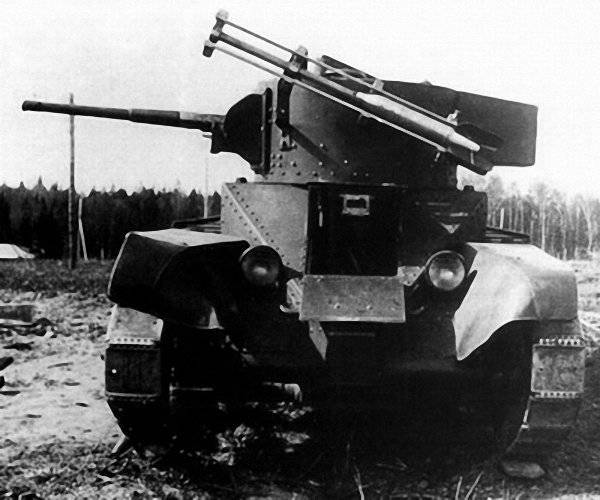 However, the developments obtained during the creation of the RBT-5 were further tried to be applied in the next project to install a high-explosive 5-mm rocket (RS) on the same BT-132. Work in this direction has been going on since the beginning of 1935, the first samples were designed at the Rocket Research Institute by engineer VI. Alexandrov and made in April of the same year. The installation consisted of two guide rails, on which the RS was fastened, and was installed on the left side of the tank tower. Vertical pickup angles were fixed, 0 and 20 degrees. Preparations for firing a PCA were also carried out by preliminary adjustment of a tank gun. The first tests were carried out on 28 on April 1935, three shots were fired with missiles, the flight range was more than 2000 meters. However, due to the increased fire hazard and the risk of fire, the tests were suspended. In the following tests, which took place on May 22, additional fire safety measures were taken, however, other serious flaws were revealed, in particular, when a shot was fired (only one shot was fired that day), the air cleaner's protective cover was torn off. After a minor design fix and damage repair, 26 tests were resumed in May and were generally successful. 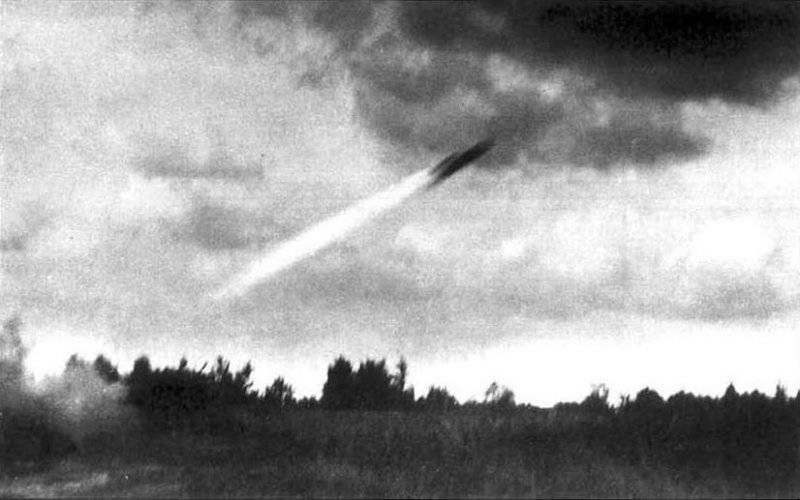 According to the results of the latest tests, the commission concluded that the installation of missile weapons on the tank is a promising direction in terms of increasing firepower, and decided to continue the work that was carried out until the end of 1936 of the year. As a result, two more advanced installations for firing rockets were designed, there were also attempts to design a tank based on the BT-7 with a special turret, the main weapon of which was to be rocket weapons. However, none of the subsequent projects was accepted for consideration, and all further work was folded. Only in the middle of the 50-s of the 20-th century, the fate of most of the projects on equipping the tank with rocket weapons ended only with prototypes.