July 28 2015
15
The next "jolly" was staged by the radicals to the Ukrainian president this Sunday. In general, to have fun, to chant the song, to break the harem pants in the gopak - this is what they like in Ukraine. What can you do, life becomes gloomy, and I want to live. So they invent a sort of "jolly" supposedly inside Ukrainian. And in fact, worldwide. 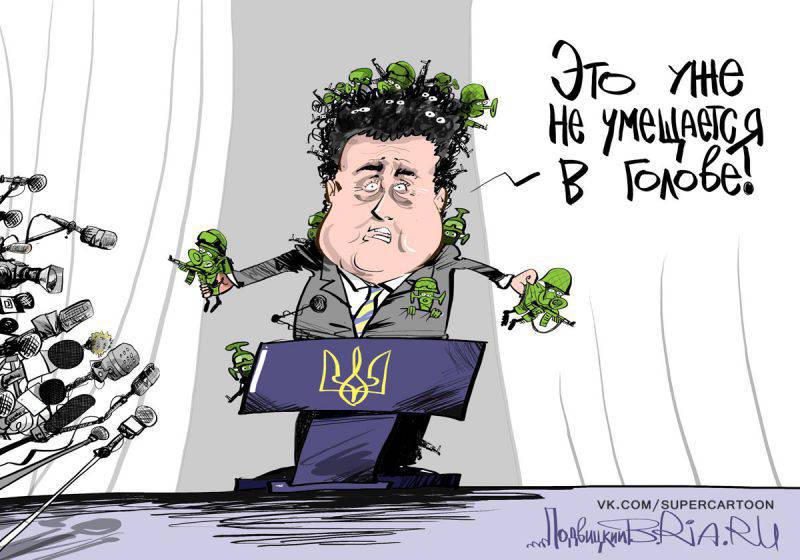 And the "separatists" are to blame, naturally. What kind of people? Well, these peace agreements were concluded in Minsk. Well, we perform, as it will ... In the morning we perform in before, in the evening we perform in the ass. The Norman Four on the phone to each other something there says. Express concern, or there satisfaction. The IMF and others, who are with money, decide how much to "credit" again. All according to plan.

According to the all-Ukrainian plan.

And then they decided on the Donbass with this Shirokino. You see, they wanted to end the war there. This is exactly the influence of the Russians. The most infamous, I must say, trait in Russia. Ukraine has been waging war on them for a year and a half, Aviation lost almost all of the military cemeteries built. Industry lost. Daily invests such money. So what? But the Russians did not come to war.

Irresponsible somehow by Russia. And now the Donbass has followed the same path ... They fought, which means they fought, and then again ... We left. What kind of tree sticks?

Poor Poroshenko already sweated from such arrogance. Shyrokyne is the key point of something there. Well, they wrote in Minsk that it is necessary to free him from the war in general. Type enough already. The locals have already fought. So what? Right here so what if all quit and release? Yes, good ... Not so busy.

And then there's this "four" ... More precisely, the troika. And more precisely, deuce. Merkel and Hollande. That is because leeches. Would give money without talking, so no, climb into the internal affairs of Ukraine. Poroshenko had a number 23 vowing to promise to release Shirokino. Moreover, on all channels to personally declare that it is done on his behalf. So, he took and ordered the Donbass. Quickly from Shyrokino! And they quickly completed. Because the Donbass is "Tse Ukraina"!

And it would be possible to pipe the next "Peremog" into the pipes. To the whole of Europe. But what is there for the whole world. But apparently not destiny.

Directly "face of the face" in their waste from life prodded their own battalion commanders deputies. Those who periodically "zrada in the Rada." Semen Semenchenko and Andrei Beletsky. Accordingly, the ex-battalions of "Donbass" and "Azov".

Sunday morning. The construction of personnel. Idyll. All "on the face", in the sense, are in the ranks, and not lying drunk in the barracks. Read out the order of the sector commander, General Fedorov. "Pursuant to the order of the Chief of General Staff Muzhenko, the battalion fighting on the advanced 1,5 of the year, of which six months in Shyrokyne, are planning to withdraw (for reasons of secrecy I will write - very far from the front). The order was not given to hands.

This is Semenchenko's post on his page on the Internet.

It seems there is an order. The battalions are no longer “Makhnovists”, but they seem to have been assigned to the Ukrainian Armed Forces. Do it.

How ... Ukraine would not be Ukraine if everything was so simple. Just think, army. So what? And democracy? And this, as his, democracy?

And it already requires Semenchenko personally president in Shyrokyne. And it does not just demand, but with the support of the "broad patriotic masses of the Ukrainian people." Submit here Tyapkina-Lyapkina! Otherwise, we will not go anywhere, and we will not give away a single inch of our native land!

And "Tyapkin-Lyapkin" in Kiev scratching his head. What to do? Well, do not obey, and that's it. Undermine the prestige of power.

But Beletsky generally agreed to the point that he compared Shirokino with the Golan Heights. And Ukraine, it turns out, with Israel. Now the Jews are thinking now ... In the same place, as Vysotsky sang once, a quarter of our former people ...

In short, the week at the Kiev government begins with "jolly". Again it is necessary to invent excuses for Western politicians. Again, we must somehow solve the problem with these "nepodchinentsy". Again, look for what kind of reforms Ukraine still conducts and which paragraphs of the Minsk agreements are carried out, as Poroshenko said, "ahead of schedule."

It must be sought. Because you need to at least find something. The difficult thing is to look for what has been done if “the horse has not rolled” yet.

But the calendar is still summer. "Top" ends. And what will happen in the fall? After all, any psychiatrist will confirm: autumn is the time of exacerbation of many diseases.