August 1 2015
14
William Marston (William W. Marston) was born in England in 1822 in the family of gunsmith Stanhope Marston, who soon moved to America. Settling in New York, father discovered weapons an enterprise producing capsule “pepper shakers” and one and two charging pistols. William first worked at his father’s enterprise, and then opened his own business. William Marston received several U.S. patents to improve the design of firearms and ammunition.

One of the most interesting and well-known developments of Marston is a triple barring (William W. Marston Three Barrel Derringer). The gun was produced in two main versions: 22 and 32 caliber. The designs of these modifications were somewhat different from each other. 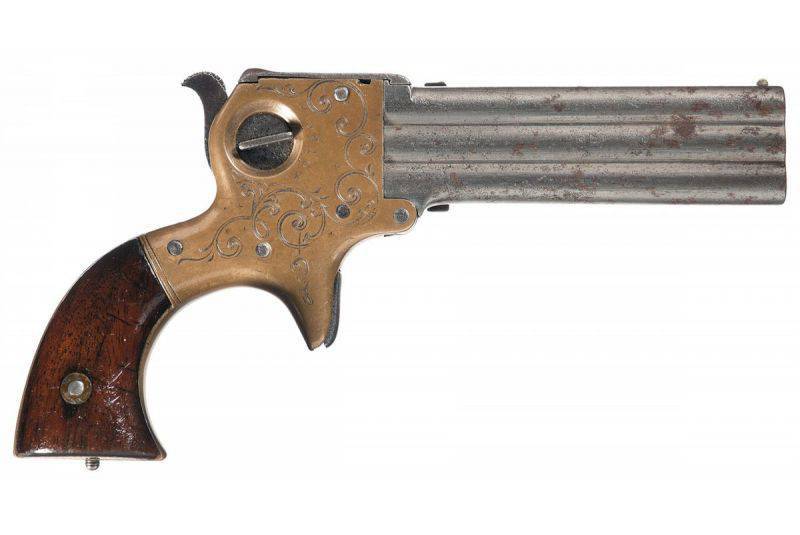 In addition to the main modifications, there were also several different varieties of Marston pistols, differing in design, finishing and marking features. If possible, we will try to illustrate the main differences between these pistols.

In the period from 1858 to 1864, the Marston enterprise produced a pistol chambered for .22 RF. The pistol consists of a brass frame with wooden handle cheeks, firing mechanism and a block of three barrels. On the left side of the block of barrels a knife is fixed, which slides along the grooves of the barrel block, advancing into a fighting position.

Some researchers indicate that the shape of the blade of the knife has changed over the course of production. For later-made pistols, the blade shape of the retractable knife has a rounded or spear point blade. Total order was released 400 pistols with a spear-shaped blade. 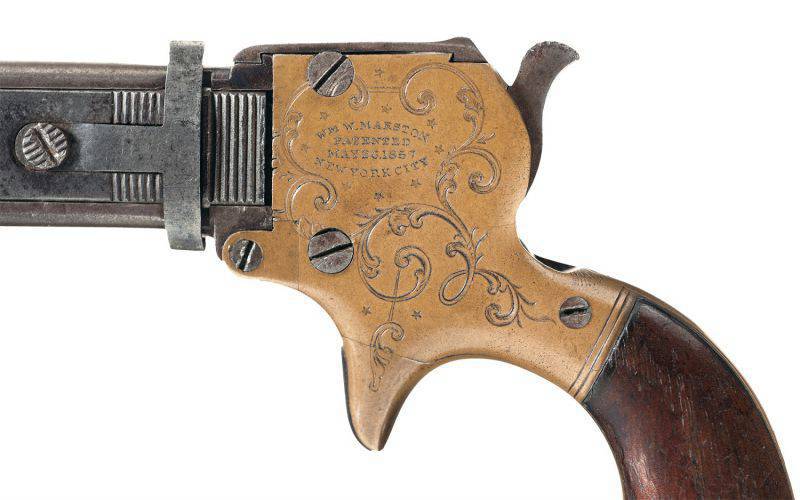 Fixing the sliding knife on the barrel unit is achieved by a spring-loaded plate, which is included in the corresponding grooves on the left side of the barrels. On the left side of the frame is marked in the form of alphanumeric text in four lines "Wm W. MARSTON / PATENTED / MAY 26, 1857 / NEW YORK CITY". Receiver unit is fixed in a frame on the hinge and for loading it goes down. Fixing trunks in the frame is achieved thanks to the latch located in the upper part of the frame. The latch rotates 90 degrees on its axis, freeing the receiver unit. Single-action pistol trigger. The trigger in the stowed position closed frame tide. 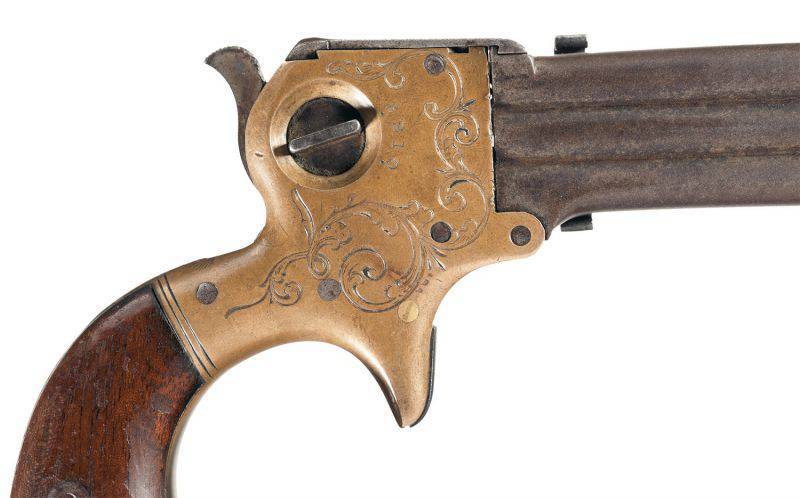 An interesting design solution was the use of a drummer switch. On the right side of the frame is placed knob switch drummer. The position of the handle is marked with the numbers “O, 1, 2, 3”, which corresponds to the positions of the drummer: on the fuse, opposite the lower, middle and upper barrels. The numbers are located to the right of the shift knob. Changing the handle position of the drummer, the shooter could choose the barrel from which once again will shoot or put the weapon on the fuse. 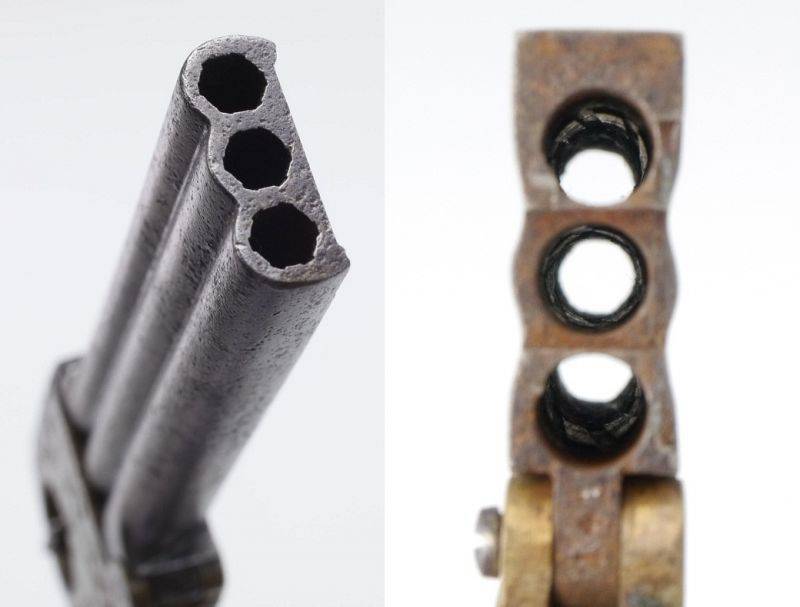 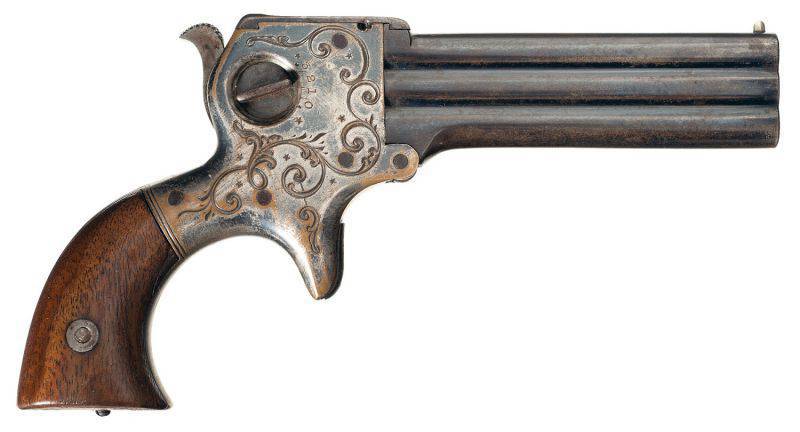 The total number of Marring derringers of the .22 caliber was released on the order of 1400 units. Of these, just over 300 pistols were made without a retractable knife. The outer surface of the frame is usually covered with silvering. The cheeks of the handle of ordinary pistols were made of walnut wood and fastened to the frame with a screw. The screw enters the left cheek of the handle, a special nut is installed in the right cheek. 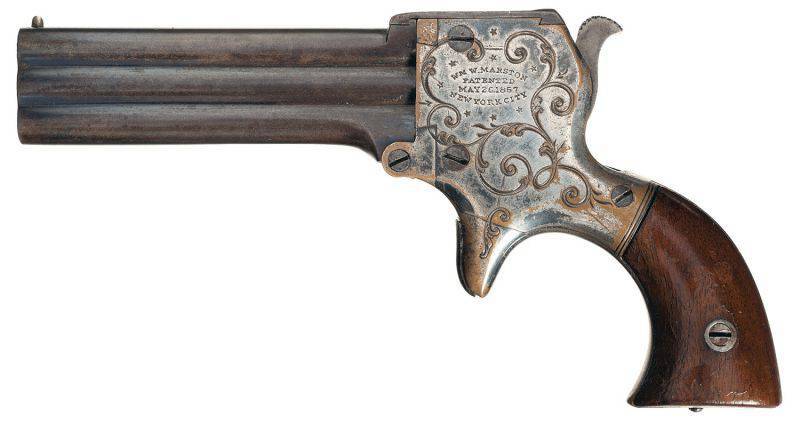 Pistols have an engraving on the surface of the frame. An interesting fact is that the price for rarer pistols without a knife does not exceed ordinary weapons, and sometimes even lower than theirs, as collectors prefer to have classic Marston derringers with a sliding knife, which have a very original appearance. 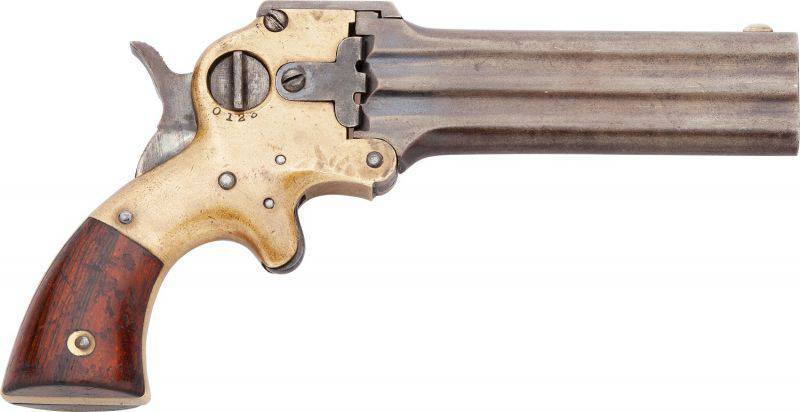 Around 1864, Marston launches the second model of his derringer, which was made before 1872. The gun was designed to fit .32 caliber ring flash (.32 rimfire). 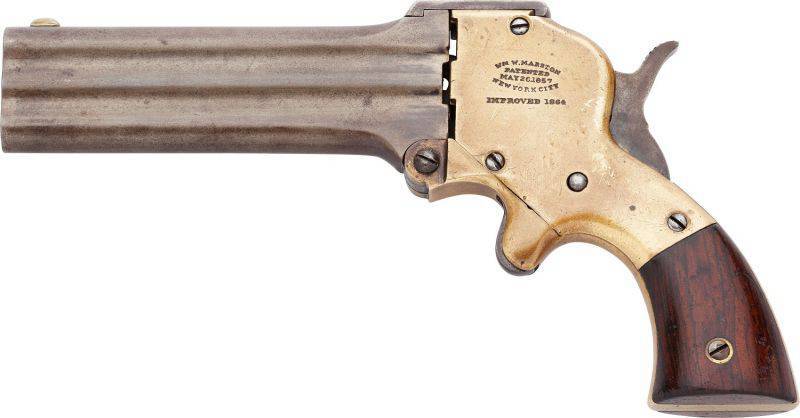 The shape of the frame and the trigger changed, the cheeks of the handle became shorter, the retractable knife was removed from the design of the weapon. 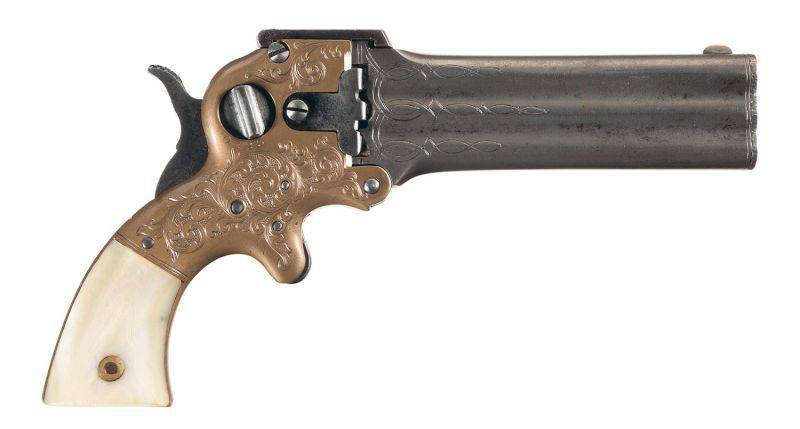 Perhaps the most important innovation in the .32 pistol caliber was the appearance of extractors. On the right side of the frame was fixed plate, in appearance resembling a fork, which allows you to remove the spent cartridges when unlocking barrels. 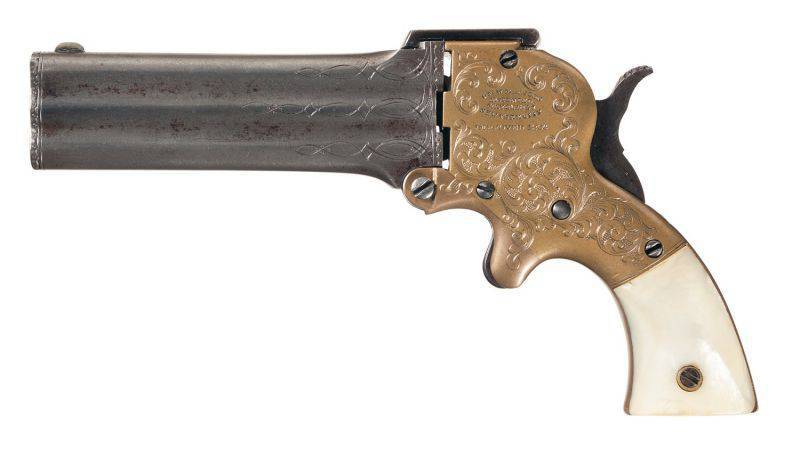 The first 50 copies of .32 caliber pistols were engraved with a frame. Later, all ordinary weapons did not have an engraving. Only by special order engraving in the form of a geometric or plant pattern was applied to the surface of the trunks and the frame. The individual pistols were set cheek handles made of bone. 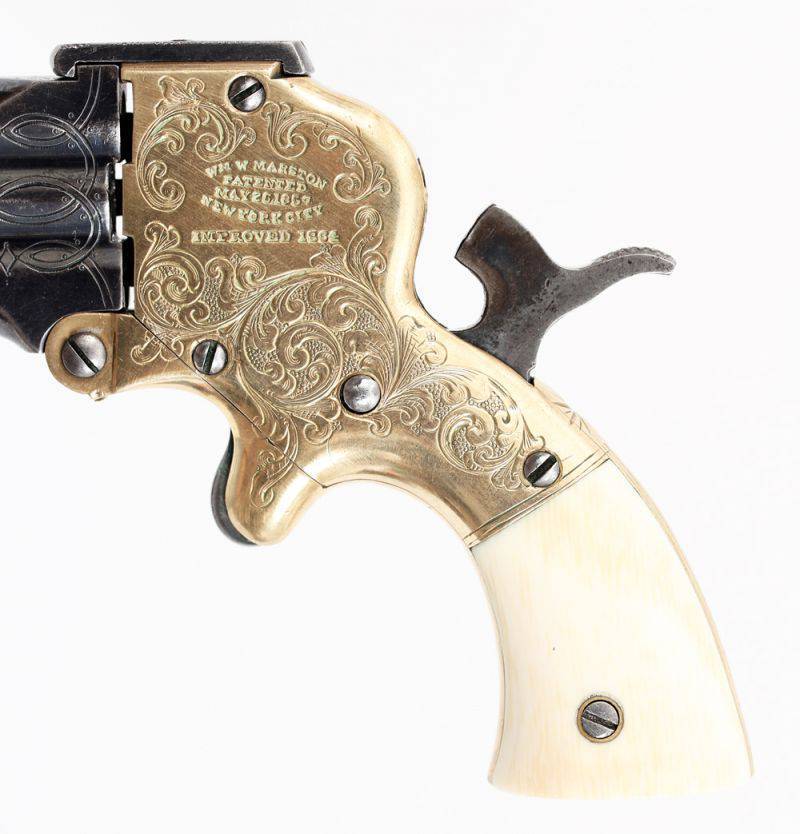 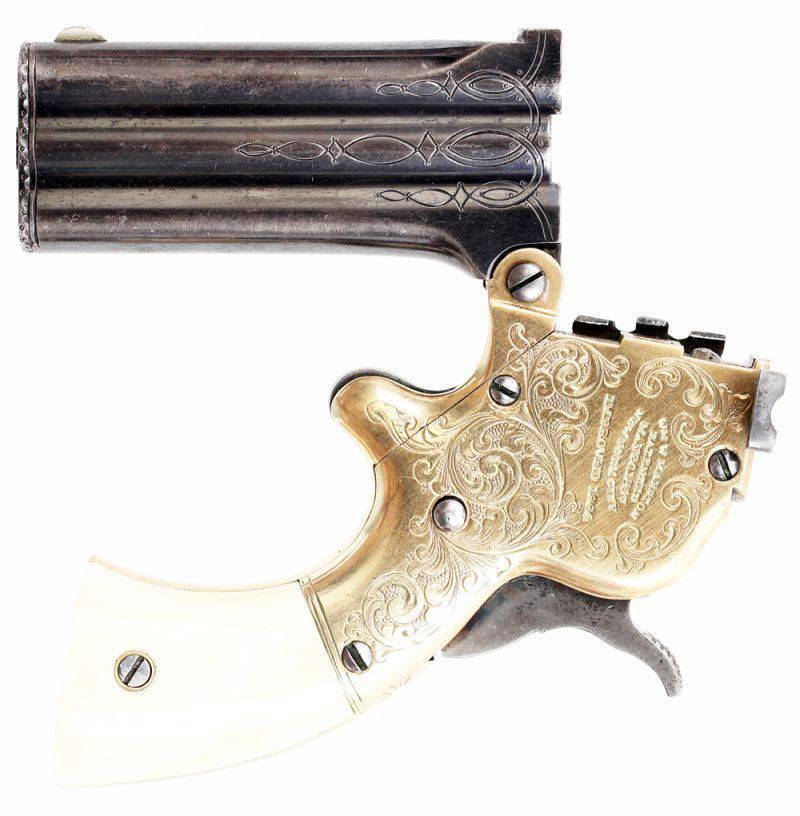 Pistols had trunks three or four inches long. The barrel units as well as on the earlier arms on the hinge went down for loading. 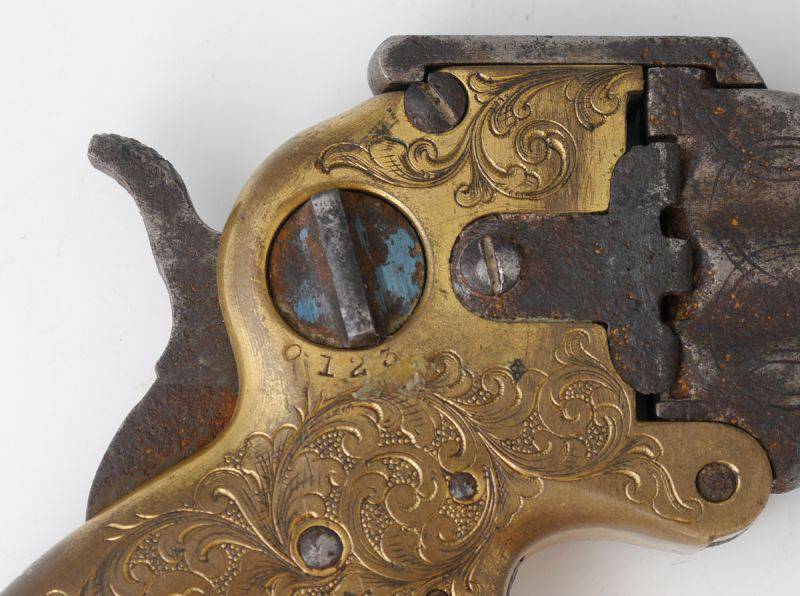 The position of the firing pin toggle position has changed slightly. The numbers “0, 1, 2, 3” are not marked to the right of the toggle knob, but below it. 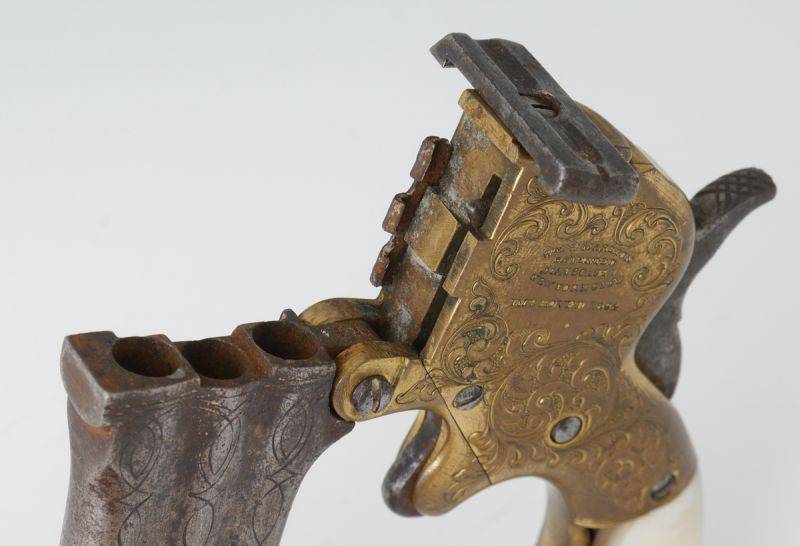 A total of about 3300 Marston pistols .32 caliber were manufactured. The price of William Marston derringers of both .22 caliber and .32 caliber generally ranges from 2000 to 7000 dollars. But this is the price of ordinary ordinary pistols. The price of a piece-made weapon with a rich engraving, with ivory handles can exceed 20-30 thousand dollars. 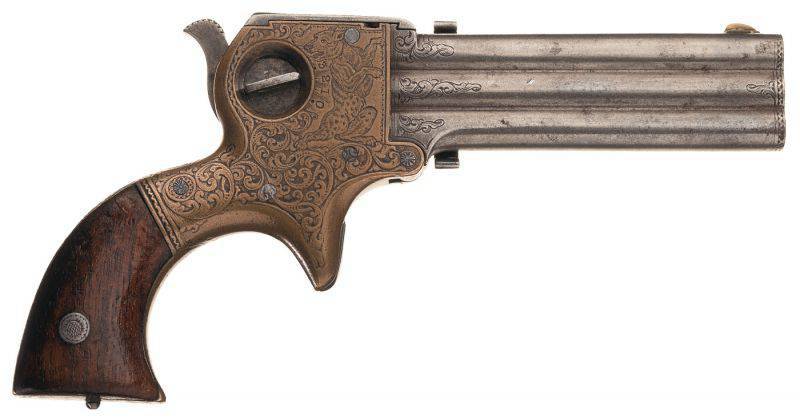 Here is one example of a gun that was put up at one of the auctions for 35 000 dollars.

At first glance, this is a simple pistol of the first version of the .22 RF caliber with a retractable knife. The cheeks of the pistol grip are made of ordinary walnut. 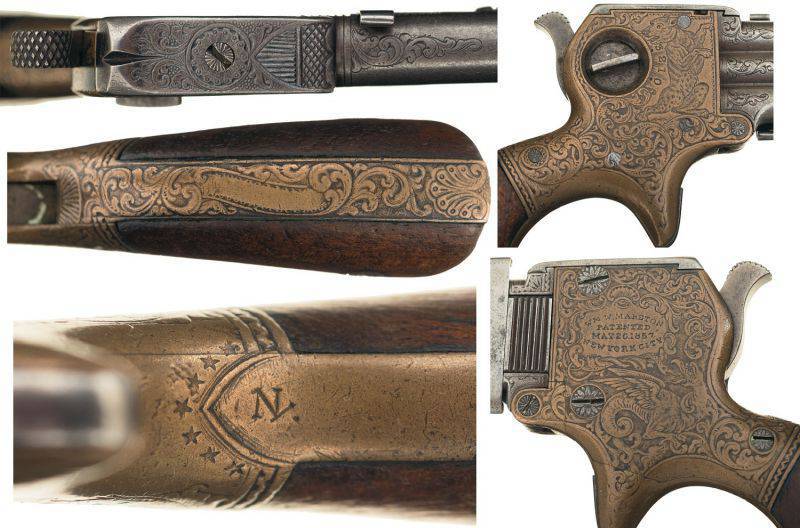 However, the engraving on the details of the weapon is unique. The famous master engraver Louis Daniel Nimschke skillfully engraved and signed the gun. The letter "N" on the inside of the pistol grip indicates the authorship of the engraver. The upper part of the trunk latch is decorated with the image of the shield with the American flag. The left side of the frame is engraved in the form of a winged fire-breathing mythical creature. On the right side is a tiger standing on its hind legs. Screw heads are decorated with floral designs. It is the rich engraving and authorship of the famous engraver that influenced the price of a gun.