What did Jerzy Hoffman keep silent about? 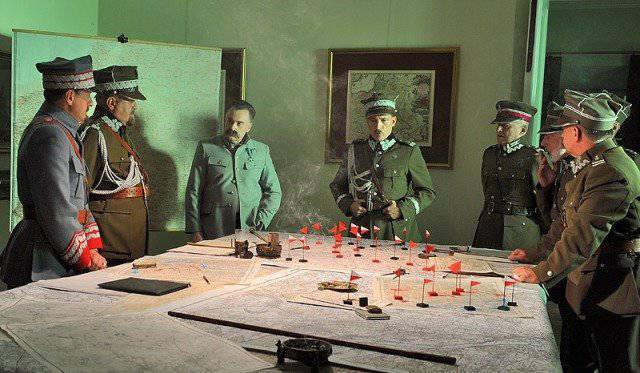 New film by Hedgehog Hoffmann "Warsaw Battle of 1920", dedicated to the events of the Soviet-Polish war 1920-1921, will certainly be in demand in the West. First of all, by virtue of the propaganda charge of the anti-Russian orientation, which this film carries in itself ... The enormous propaganda potential of the cinema was also mentioned by V.I. Lenin, and in the XXI century. cinema remains a powerful means of influencing the masses. Polish President Bronislaw Komorowski and his wife have already taken part in the premiere of the film, and the September 30 film itself has been released not only in Poland, but also abroad.

As you know, the Soviet-Polish war was of a fierce nature. The Red Army led a successful offensive in the western direction, crushing the defense of the White Poles, and reached Warsaw, where, however, it was defeated and was forced to roll back. As a result - the so-called. “Kresy vskhodni”, that is, the territory of Western Belarus and Western Ukraine remained under Poland. The defeat of the Red Army near Warsaw in Polish historiography is called the “miracle on the Vistula”, meaning that it saved Poland from inevitable collapse. The theme of the Soviet-Polish war runs like a thread through the whole of Polish historiography, being the starting point of modern-day Polish patriotism in its Russophobic charm. The date of the Warsaw battle is a date-symbol, a political-psychological milestone, a sign-expression of the eternal, as the Poles believe, opposition to the defender of Western civilization - Poland and the “Russian barbarians”.

The main message of the director - “a miracle on the Vistula” occurred due to the commander’s genius Jozef Pilsudski. The picture is related to the historical genre, where everything is there: dashing cavalry attacks, courageous actions of the main characters and scenes of romantic love. There is not only the whole truth about those distant events, because the creation of a true, truly realistic picture was not part of the plans of Jerzy Hoffmann.

It has long been noted that Polish patriotism is possible only at the expense of “eating” the neighboring nations. Publicist Jan Jozef Lipsky in the article “Two Homelands - Two Patriotism” subjected this position to merciless criticism. Y. Lipsky, a veteran of the Home Army, was an anti-Soviet, but he was also an intellectual. Why for the Poles is Katyn the biggest tragedy of the Second World War, and not multi-million victims on the western front? One answer: without Russophobia there is no Polish patriotism.

The ethnosociologist Wilhelm Mühlmann introduced such a concept as “ethnocentrum”. An ethnocentrum is an awareness by an ethnos of oneself within the space where this ethnos lives. This is a form of ethnic thinking, where the ethnos includes everything that surrounds it: from the terrain (mountains, rivers, forests) to highly differentiated concepts (state idea, wars, alliances, economic ties, cultural and diplomatic contacts). Each ethnocentrum seeks to remain intact. The ethnocentrum is afraid of a conceptual split, a split, because a split of the ethnocentrum would mean a split of the ethnic identity and modification of the internal life of the people. It is also possible to describe the relations of Poles and Russians in ethnosociological terms. The Polish ethnocentrum subconsciously feels the power of the Russian ethnocentrum as a more numerous imperial people, besides the non-Catholic people.

The Polish ethnocentrum is not in the mood for peaceful relations with the Russians for the reason that it is afraid to “let in” those who are more powerful, more energetic and more numerous. The Polish ethnocentrum is afraid of "drowning" and dissolving in the Russian ethnocentrum, is afraid of being absorbed or split in two, i.e. to accept both Catholic and Orthodox identity. Therefore, a considerable number of Orthodox Poles or Poles who served the Russian Empire, and then the USSR (General A. Rzhevussky, Major General F. Krukovsky, mathematician NI Lobachevsky, classic of Russian literature N.V. Gogol, admiral GF Tsivinsky , Soviet military leader KK Rokossovsky, founder of the Cheka, F. Dzerzhinsky), by the very same Polish historiography is bracketed, considered by her as ideological antibodies, that carries the danger of inoculating elements of the ethnic consciousness of the neighboring people (Russians) and contributes to the monopoly - atolicheskogo anti-Russian consciousness peculiar to Poles.

Hence also the desire to build such relations with the Russians, under which it would be absolutely impossible for the Russian ethnocentrum to penetrate the excessive volume of Russian, not Catholic influence. This is a subconscious mechanism of ethnic protection, under which everything else is already fitted - politics, culture, religion, the media. The Poles feel safe only under the condition of the maximum cultural and political distance from the vast Russian people, for which they actively use anti-Russian propaganda.

Obviously, the appearance of the film Hedge-Hoffmann is due to the subconscious mechanisms of Polish ethnocentrism, which, peering into Russia like a mirror, says: “This is not me.” Were it not for the “mirror of Russia”, Poland would not have been able to constitute its own ethnic “I”, would have found itself in ethnopsychological weightlessness, in a conceptual vacuum. Therefore, the film of Jerzy Hoffman could be a priori only anti-Russian. And to give anti-Russianness greater convexity in the film, the "uncomfortable" moments of the Soviet-Polish war of 1919-1920 were carefully overlooked.

First, the the goals of Warsaw during the Soviet-Polish war were extremely aggressive - the restoration of Poland in the historic borders of the Commonwealth 1772 of the year, with the establishment of control over Lithuania, Belarus and Ukraine, including the Donbass!

Secondly, Pilsudski was an expansionist, who did not conceal that Russia was the main target: “Closed within the borders of the sixteenth century, cut off from the Black and Baltic Seas, deprived of the land and fossil riches of the South and Southeast, Russia could easily become a second-rate power, unable to seriously threaten the new-found independence of Poland. Poland, as the largest and strongest of the new states, could easily secure a sphere of influence that would extend from Finland to the Caucasus Mountains. ”

Thirdly, it was the Polish side that turned to active violent actions, provoking, in fact, the beginning of the war. Polish troops occupied the Belarusian and Ukrainian cities with a forced march to forever “stake out” them beyond Poland. In addition, Polish units under the command of Lucian Zeligovsky invaded Lithuania, which gained independence from the hands of Soviet Russia, and created a puppet state of Middle Lithuania on part of its territories. Zeligovsky himself was appointed (from Warsaw) the ruler of Middle Lithuania. Thus, part of the Lithuanian lands unilaterally became part of Poland, where they remained until the liquidation of the Polish statehood in 1939. The Polish-Lithuanian war for the Poles is an insignificant milestone in their stories. For modern Lithuanians, on the contrary, this war is filled with tragic meaning. And today the tough stance of Vilnius on the issue of the Lithuanianization of the Lithuanian Poles is an echo of the difficult Polish-Lithuanian relations.

Fourthly, Pilsudski was a dictator, an ideologue of the policy of "reorganization", i.e. forcible pacification of the non-Polish ethnic element and the suppression of freedoms within Poland itself. Censorship was introduced, opposition parties were outlawed, the first concentration camps appeared (Birch Kartuzskaya). The sanation regime operated from 1926 to 1939, so the image of Pilsudski in the image of a noble knight without fear and reproach is far from the historical truth.

The history of any state is filled with myths, but it seems that Polish history is the crown of myth-making. Do the Poles know their own history all, without bills? Not sure.

Every Pole, young and old, thanks to official propaganda knows that the NKVD is exclusively the "executioners and punitive" of the Polish people. And how many of the Poles know about the service of their compatriots in the NKVD? Almost no one knows about this. But the fact remains: after the entry of the Western Ukrainian lands into the USSR and after 1945, the local Poles went to cooperate with the Soviets to jointly fight against the Ukrainian bandit underground. Then Bandera, Shukhavichy and other "historical carrion" at the root of the massacre of peaceful Poles - along with children and women. And the Poles went to cooperate with the security officers. Chekists created Polish self-defense detachments, commanded by Soviet officers. Poles issued weapon and on command they went fishing in the forests and caves of the Ukrainian nationalists. The total number of Polish volunteers in parts of the NKVD reached 30 000.

In Poland, they do not like communists, especially Soviet ones. But for some reason, Polish historiography is silent that, for example, at the beginning of the 1930-s, the proportion of ethnic Poles in the Communist Party of Ukraine was approximately twice as large as among the entire population of the republic, and the general secretary of the Central Committee of the Communist Party (B) U was a Pole Stanislav Kosior.

Few in Poland know that the head of the OGPU (former NKVD) from 1926 to 1934 was the representative of the Polish aristocratic family Vyacheslav Menzhinsky. Moreover, the genus of the Menzhinsky's aristocrats was baptized into Orthodoxy. By the way, Menzhinsky replaced the other Pole from the aristocratic family, Dzerzhinsky, as the head of the OGPU. In today's Poland, we hear annoyed remarks: “Dzerzhinsky is not a Pole. He is a Jew! ”So illogical is a Polish man in the street trying to explain to himself the service of Dzherzhinsky nobleman for the benefit of Russia. But Dzerzhinsky is not a Jew. He is a Pole, and he studied at the same gymnasium with Rusoyed Yu. Pilsudski.

Meanwhile, the 41 International Molodist International Film Festival is taking place in Kiev, which was opened by the Jerzy Hoffmann Warsaw Battle on October 9, 22. Film Festival Director General Andrei Khalpakhchi said that "the film is dedicated to the events of 1920 of the year, when the army of Marshal Jozef Pilsudski stopped the Bolshevik invasion of Poland, headed by Leo Trotsky ... This is a very large-scale movie." And not a word that the ultimate goal of the Polish offensive to the east in 1920 was, among other things, the seizure of all Ukraine.

We are in Yandex Zen
Be sure to watch: folk cinema "28 Panfilov" show Russia the feat of its heroes
"Our Answer to Spielberg", or Should Foreign Cinema Be Banned - 2
8 comments
Information
Dear reader, to leave comments on the publication, you must to register.